***Update*** If you missed tonight’s live feed, don’t fret! The link to the live feed below takes you to our post where you can watch the video replay.

Not one of the lucky few in New York for tonight’s Outlander premiere week fun?  No problem!

Stick on this page (though you can watch the live feed here) as we LIVE blog the “From Scotland to Paris: A Behind the Scenes Journey with Outlander” event!

Be sure to comment and join in the fun!  Now bring on 7:30p EST and let’s get this magic started…

[7:36 pm] . . . tap, tap, tap . . . who’s anxious and ready for this thing to start? *emphatically raises hand* [7:40 pm] While we wait, let’s play a little game.  How many times have you re-watched season one during Droughtlander?  It’s okay, we’re in the tree of trust . . . you can share.  Comment below. [7:43 pm] Am I supposed to stay composed while Bear and Raya perform their magic? Because it ain’t happening.  That was incredible, per usual.  (side note: How awesome is this photo capturing Mary’s personal moment with Raya!) 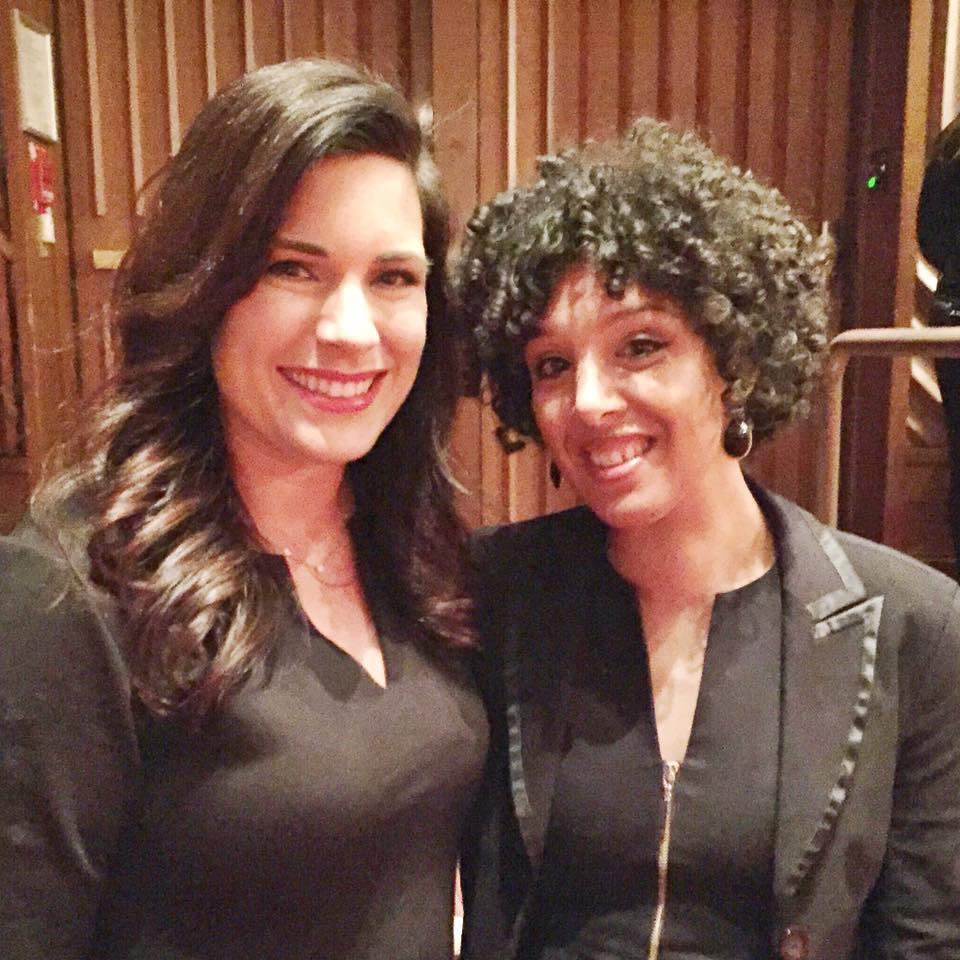 [7:45 pm] CBS news correspondent Michelle Miller takes the stage as moderator, in a very busy floral pattern I’ll add.  She’s telling her personal “how I came to Outlander” story.  We all have them. They usually end with us gorging off the book and TV buffet. She wasn’t immune to it either. Good to hear!

[7:48 pm] Bear McCreary takes the stage.  Somewhere in the crowd, I hear Outlander Cast host Blake squealing. [7:50 pm] Sam Heughan! Skinny tie, whiskey, smile and all.  Hello, gorgeous. [7:51 pm] Forget Wednesday, it’s woman crush Tuesday!  Caitriona looks like a porcelain marble statue.  Like something you’d see in Italy.  And Tobias, sigh.  I love that he got to make the last entrance. [7:54 pm] How cool is it that we’re getting to see Bear in the mix of the rest of the dream team that make Outlander what it is?! [7:57 pm] Bear is discussing the authentic approach he took to making sure that the new music matches the feel of the era and setting of season two. [7:58 pm] In case you weren’t aware, the actors don’t hear the score that accompanies a particular scene or any music within an episode until it airs! They don’t get input, and Ron thinks it’s “just it should be.” [8:00 pm] Ron busts Terry’s long-standing love of Outlander by sharing she’s got at least five well-worn copies of the book.  They’re sharing the story of how the combination of spousal pressure and campaigning from colleague Maril got the ball rolling on Ron spearheading the TV adaptation. [8:02 pm] Maril is talking. It’s important, I’m certain . . . but all I can focus on is how amazing she looks this week (and always!).  She could be confused for a cast member! [8:03 pm] Ohhhh we’re getting a preview of the glorious costumes Terry fashioned for season two. That process involved employing recent grads.  Talk about a dream gig! [8:05 pm] There’s no all night 18th century wardrobe emporium.  Huh, good to know.  But seriously, to make this season work, they had to recreate millions of shoes, thousands of costumes, etc. FROM SCRATCH to achieve the look.  Mental note: I will not whine about my job tomorrow. I will not whine about my job tomorrow. I will not whine about my job tomorrow.

[8:07 pm] “There was no way I was putting him in pink silk or anything like that…” – Terry, on costuming Sam for season two. [8:09 pm] Remember the moment I was having about Bear getting his time to gab? Mmhmm, I’m having that now about Terry getting this uninterrupted stage time to shine alongside her work. This is the most comfortable she’s looked on the panel all night. You go, girl. [8:10 pm] Terry has frequently been asked about her favorite piece from season two.  She hasn’t been able to share, until now . . . because we’re finally getting to see it too. It’s a gorgeous Claire piece (will post photo later). [8:12 pm] Ahhh, the dress.  You know the one.  We are seeing Cait actually moving about in it and it’s glorious.  Let’s hope they paired the shoes for her (wink wink, Kendra). [8:13 pm] Michelle Miller just summed it up best, “that was costume porn.”  Yep. [8:14 pm] “After awhile, I wanted to hang with the boys and sit on the floor. But I wasn’t allowed to.” – Cait expressing her love for getting to wear the “costume porn” mixed in with the downside. [8:15 pm] Bear Strength watch out, Michelle just told Sam to “I can take you down, baby. I’m from South Central LA.”  LMAO. [8:17 pm] He speaks! Tobias’ microphone is not, as it turns out, OFF.
[8:19 pm] Cait stays warm on set (and Claire too, in character) by making use of a kilt too! Don’t get carried away shippers . . . she didn’t say WHOSE. [8:22 pm] It’s Production Designer Jon Gary Steele’s turn to be in focus! He’s worked with Ron and Maril on previous shows, and is Terry’s best friend. [8:24 pm] If there’s any truth to Terry’s ability to play rain maker to get all the key folks on board to make her favorite book come to life, #TerryForPresident [8:26 pm] Jon reveals that 115 people all worked together to build these elaborately beautiful (and functional!) sets.  Pieces of the sets are interchangeable to work for various rooms. Incredible. [8:28 pm] All of the lighting is natural to keep the authenticity alive – candles, chandelier, fires in the fireplace. [8:29 pm] Murtagh in a daybed.  It’s like your favorite childhood teddy, just waiting for you all soft and snuggly. [8:31 pm] “We make a movie every episode.” – Maril.   And it shows. The production value of this show is unprecedented. [8:32 pm] Michelle – “I was in the bedroom set with Jamie. Well, Sam actually.”  Sam – “That’s how rumors get started.” Folks, I’m pretty sure that was a passive aggressive plea to shut the crazy down on relationship pondering. [8:35 pm] Cait says it’s easier to get into character and focus on the emotion of the scene when you walk into a set that looks as the Outlander ones do. [8:36 pm] Sam – “Actually Jon, we were wondering if you’d do our houses.” See what I did there with the bolding? Did you see?

***SPOILER FREE AGAIN FROM HERE ON OUT***

[8:40 pm] I, for one, cannot WAIT to see Tobias shine again in season two.  I know the fandom is divided, but you can’t dismiss the ridiculous talent of Tobias Menzies. [8:41 pm] Ron is detailing the difference in experience between reading the story versus watching it on TV.  He’s expressed this before, but it’s important we all note it before we dive into season two and wonder how he will bring to life Diana’s storytelling in Dragonfly in Amber.  He has to cut the book into hours, then each hour into highlights of the story, then finalize how to bring that to the screen.  Translation: Breathe, folks – it won’t all be verbatim. [8:44 pm] Rupert and Angus, Rupert and Angus! More of them. Please and thank you.  (Michelle noted that the fleshing out of these characters was one of Diana’s favorite changes Ron made for screen.) [8:47 pm] “Well Ron obviously likes strong women.” – Maril, referencing herself, Terry and the strong female characters he’s developed. [8:48 pm] Who knew!  The makeup sex scene in The Reckoning was the first one Sam and Cait ever shot together.  Yikes, no pressure.  And there were carpet burns. Lots of carpet burns. [8:50 pm] “I said I was a monk, not a virgin [sic]. If I need help, I’ll ask for it.” was nearly cut from the final version of “The Wedding”.  We have Maril to thank for two of Jamie’s best lines of season one. She fought Ron hard to ensure they were included. And I quote, “Ron, you don’t understand women.” That sealed the deal. [8:53 pm] Let’s just agree now that we’d all watch a reality show that lets us into Ron and Terry’s home life.  This exchange between them – “I didn’t throw a chair at you, exactly . . . we had to go to work the next day” – locks that up for me. [8:55 pm] Bear is talking. It’s important, I’m certain . . . but all I can focus on is how dapper he looks in his suit and man bun. This is a man bun I can get behind. Sam, take note. [8:56 pm] Michelle speaks for a few of us as she thanks Ron for how he took liberties with the development of Frank’s character from the book to screen, helping us to better understand him. [8:57 pm] Say it ain’t so! It’s done.  Already? Nooooooooo.  I’m going to keep staring at this screen just in case. [8:58 pm] Wait, I love that Outlander SoCal folks just made it in at the last moment before the screen shut down thanks to a live mic.  Go SoCal (my former home)! [9:00 pm] Well that clears that up. They’re really done.  Thanks for joining, friends! Bring on season two . . . speaking of, we’ll be live blogging the episodes every Saturday night at 9:00 pm EST.  Watch with us!
What did you think of tonight’s event? What was your favorite part?
Did anything surprise you?