Outlander episode 2: THAT dress! No, not the red one! *SPOILERS*

Everyone knew the red dress was coming. Starz based much of its promotional material on that gorgeous image of Claire in it. Vive les Frasers! And stunning it — and Caitriona Balfe — both were.

But if anyone was unclear on the fact that we weren’t in Scotland anymore, that point was made patently obvious when Madame Nesle de la Tourelle walked in with King Louis XV wearing a dress that was missing most of its front, her nipples adorned instead with some jewelry and piercings.

How did costume wizard Terry Dresbach come up with this dress? Was nipple piercing even a thing in 18th century Paris? And is the person who pierced Madame de la Tourelle’s nipples another time-traveling hint? Read on and find out.

Let’s start by noting this: you can pierce a lot of body parts, parts that don’t necessarily leap to mind when you utter the words “body piercing.” And I decided, after a quick scan, that I wasn’t going to go there. This post is focusing on nipple piercings. If you want to know about other body parts, well have at it. The links here can take you far down that rabbit hole quickly.

Just in case you don’t know what dress I’m referring to or maybe your significant other (based on my man’s renewed interest in all things Outlander after this episode) wants another gander. Here it is. 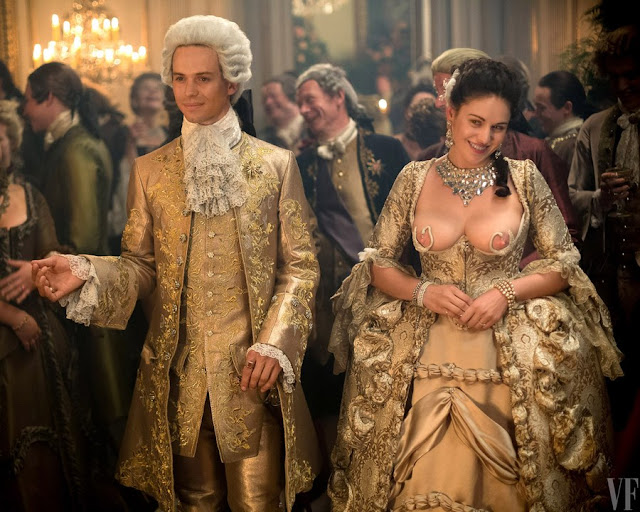 Stunning isn’t it? And we’d say that even if the wearer’s breasts weren’t exposed or adorned with swan jewelry. Well done, Terry!

The question is would this kind of apparel actually have been worn in 18th century Paris? Just as Outlanderland is filled with book purists analyzing (and usually bemoaning) every moment the show strays from the book, a subset of historians also note Diana Gabaldon’s every tweak of historical fact. (This is the first moment where I feel compelled to remind everyone that this is a book of fiction, you know that style of writing potentially loosely based on a time period but actually not a historical tome.)

Anyway, the answer for those wondering if this dress is historically accurate is — maybe.

A recent Vanity Fair article talked to Dresbach about what officially was called the Swan Dress but behind-the-scenes was called the Nipple dress for obvious reasons. (BTW have you noticed how her name so fits her profession? Dress-bach? Talk about destiny.) Anyway, Vanity Fair asked Dresbach if Gabaldon drew on historical precedent when she created this dress. Here’s Dressbach’s response:

“She did. I want to kill her for it. It’s all wonderful on the written page, but when you have to try to figure out how you’re going to pull that off, it’s a whole different ball game. Body piercings got back to the Egyptians. It’s nothing new. We think we’re bold, we think we push the envelope, but we have nothing on history. There’s a lot of exposure of body parts throughout fashion since the beginning of time.

“It was hard to find reference material for it, and we weren’t able to locate a lot of paintings where women at that time had pierced nipples so we sort of leapt and went with the books and tried to get as close to it as we could creating it ourselves. It was difficult. There’s no jewelry store that sells it. Those nipple rings were created on my kitchen table out of Fimo clay. There were many, many attempts to make swans that would completely do what they needed to do. It’s one of the most interesting jobs I’ve had in my career.”

I can hear the historians chortling. Dressbach herself is quoted saying it was hard to find reference material about nipple piercing in 18th century France. Does that mean it didn’t happen during the reign of Louis XV?
While several sources note that exposed breasts became a thing as early as the middle of the 14th century, information about nipple piercing is indeed harder to find. While it is referenced occurring prior to the 18th century, a potential gap then seems to occur (at least in the references I could find), with nipple piercings as a fashion statement cropping up again during the — wait for it — Victorian era, specifically in the 1890s.
Painful Pleasures (I told you this topic was a rabbit hole) offers this historical recap (and no I have not checked the site’s sources, although it does provide some footnotes for the historians among you.):
“In the middle of the 14th century…Many women suddenly wore ‘such low necklines that you could see nearly half their breasts’ and among the upper classes in the same century, Queen Isabella of Bavaria introduced the ‘Garments of the grand neckline,’ where the dress was open to the navel. This fashion eventually led to the application of rouge to freely-displayed nipples, those ‘little apples of paradise,’ and to placing diamond studded rings or small caps on them, even to piercing them and passing gold chains through them decorated with diamonds.”
“In the late 1890s, the ‘Bosom Ring’ came into fashion briefly; they were sold in expensive Parisian jewelry shops. These ‘Anneux de Sein’ were inserted through the nipple, and some women wore one in each nipple and linked them with a delicate chain. ‘The rings enlarged the nipples and kept them in a state of constant excitation…the medical community was outraged by these cosmetic procedures for they represented a rejection of traditional conceptions of the purpose of a woman’s body.’ One London socialite detailed her opinion of this fashion craze in an 1890 issue of Vogue:

‘For a long time I could not understand why I should consent to such a painful operation without sufficient reason. I soon, however, came to the conclusion that many ladies are ready to beat the passing pain for the sake of love. I found that the breasts of those who wore rings were incomparably rounder and fuller developed than those who did not. My doubts were now at an end…so I had my nipples pierced and when the wounds were healed, I had rings inserts…with regard to the experience of wearing these rings, I can only say that they are not in the least uncomfortable or painful. On the contrary, the slight rubbing and slipping of the rings causes in me an extremely titillating feeling, and all my colleagues I have spoken to on this subject have confirmed my opinion.'”
So there you have it. Exposed breasts and nipple piercing happened. Exactly where and when is, like a well-placed fan, a little harder to discern. What we do know, at least if you’ve read ‘Dragonfly in Amber’, is who pierced Madame de la Tourelle’s nipples: none other than Master Raymond. (That man does provide a lot of different services doesn’t he?).

If you would like to leave Master Raymond’s character a mystery as the show unfolds, stop reading, now!

Claire, after being quite nonplussed by the ornate dangling swans with ruby eyes says this to Jamie:         “She told Marie d’Arbanville that Master Raymond did the piercing for her,” I remarked under my breath. His fascinated gaze didn’t waver.
“Shall I make an appointment?” I asked. “I imagine he’d do it for me if I gave him the recipe for caraway tonic.”
Jamie glanced down at me at last. Taking my elbow, he steered me toward the refreshment alcove.
“If you so much as speak to Master Raymond again,” he said, out of the corner of his mouth, “I’ll pierce them for ye myself — wi’ my teeth.”

So here’s something to ponder. If nipple piercing, indeed, isn’t exactly found in the court of King Louis XV, does this mean Master Raymond is a time traveler, introducing an “out of time” fashion statement to the Parisian elite? Well, I leave you with this gem from Gabaldon herself, in which she has this to say about Master Raymond:

“Well, he’s a prehistoric time traveler. I think he came from somewhere about 400 BC or perhaps a bit earlier (not technically ‘prehistoric,’ but they certainly weren’t using written record where he started out) and the 18th century is not his first stop.” – Diana Gabaldon

So there you go!  But was this the intent?

Was the Nipple Dress too risqué or a moment of daring magnificence? And what do you think about Master Raymond? Was Diana dropping breadcrumbs?