By now the collective hyperventilating surrounding season two of Outlander has abated a bit. The premiere has occurred and while we’re all obsessing about the rest of the season, we maybe, just maybe, can focus on something else, albeit temporarily.
It is with that in mind that we are launching an occasional series here at OCB. We’re calling it DG Watch because without DG — please tell me you knew that was Diana Gabaldon — none of this would be possible. Our first installment included information about book 10 in the Outlander series and a prequel in the works about Jamie’s parents. This installment comes compliments of a USA Today live chat she did in the middle of season two preview week mania.
The chat was also on the eve of her novella, Virgins, becoming available as an e-book in the US, UK and Canada. (Sorry, rest of the world and sorry, people who prefer to hold a book in their hands. The physical book will be released as a collection of seven novellas later in 2016 or early 2017.)
Gabaldon took questions from fans and revealed a little bit of what she’s up to, including which episode she wrote in season two and what’s coming with Master Raymond.
Gabaldon started the chat by spelling her name — yes, she actually did that. Not sure who she imagined was tying themselves to their computer on a weekday to watch this. People who had never heard of her? I mean, I was probably one of the few people watching who couldn’t recite entire sections of the books (although I am becoming scarily close to having that skill set).
Anyway…..Questions were emailed in. You can listen to the whole chat here. (Stick with it; the beginning few minutes had some technological difficulties.) But here are my take-aways.
Information relevant to season two: 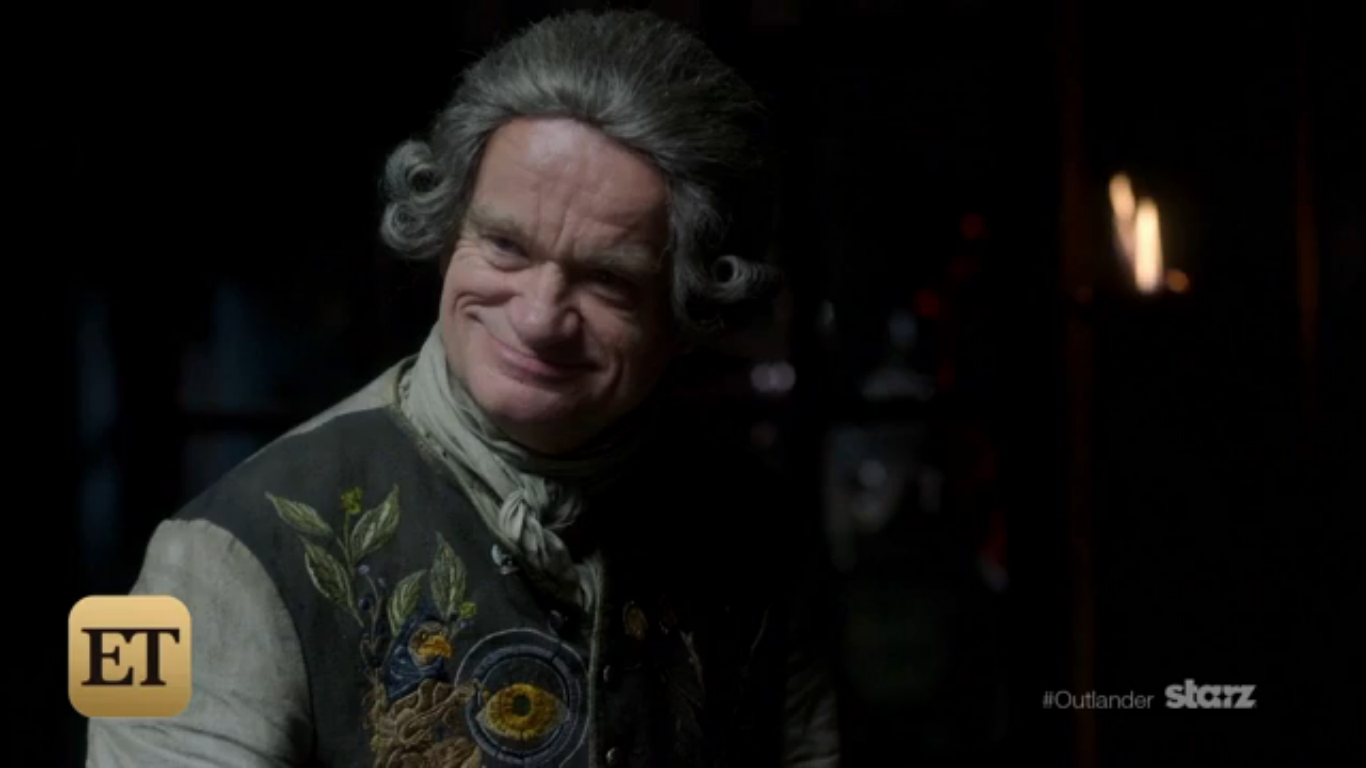 • Master Raymond is in Gabaldon’s head, and as regular DG followers know, if someone is in her head, that means at the very least a novella is coming down the road. “I’m working on chunks and pieces of the first Master Raymond novel,” she said. “There may be two or three of those.” (At which point I may have yelled at my computer, “Book nine! Book ten! Focus, Gabaldon, focus! Finish Outlander for God’s sake!) 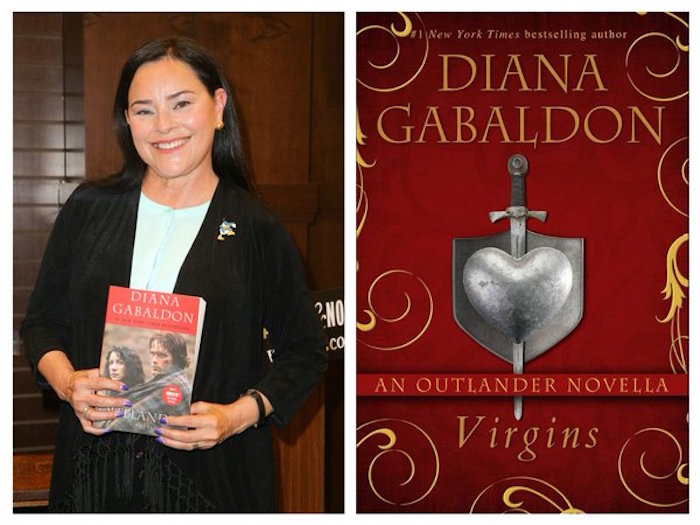 • Virgins is about Jamie and Ian Murray when they are respectively 19 and 20. It’s set in 1740, after Jamie has been flogged by Black Jack Randall. His father is dead and he’s been sent to France to hide from the English. “Jamie is still badly hurt from the flogging,” Gabaldon said in the interview. “He knows his father is dead and he feels he’s responsible and that he’s also responsible for what happened to Jenny.” (Or what he thinks happened to Jenny.) He and Ian are French mercenaries, which Gabaldon called a “good distraction.” 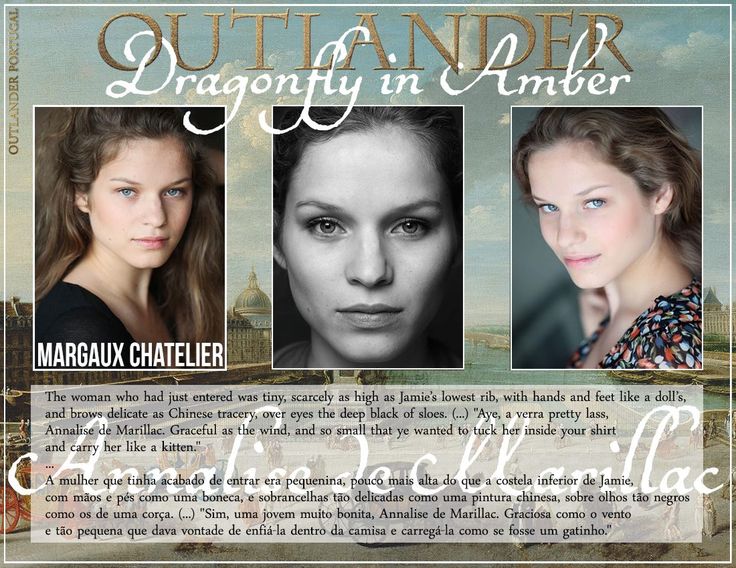 So how is this relevant to season two? Well, book readers may remember Annalise de Marillac, a young Parisian who had a past relationship with Jamie. In Dragonfly in Amber it’s not that big a deal. But we already know the character is appearing in season two and given Ron D. Moore’s propensity for playing up tension where he can, it’s highly possible this “past” could be made to be something more than indicated in the book. Gabaldon also revealed in this interview that some other dialogue from Virgins made it into season one: In “The Watch,” after Ian has killed Horrocks, Jamie pulls Ian out of his PTSD reaction by reminding him of how they discussed which act would get them entry into hell — fornicating with a lass or killing someone. That dialogue is right out of Virgins, Gabaldon said, because she was working on the novella at the time and told Moore. So that means Moore likely knows more Annalise backstory, which in turn has me thinking it could affect what happens in season two. Stay tuned.
• Gabaldon wrote episode 11, “Vengeance is Mine.” “It’s a quote from the book,” she said. “If you remember [the quote] you’ll know or more less what is happening in that episode.” If you haven’t read the books or have but can’t remember exactly what that title might reference because the book is 743 pages long and ohdeargod the series has a lot of details, I wrote about what I think happens in each episode based on the titles; Gabaldon’s comment here makes me think I’ve got episode 11 right. Murtagh fans will likely be pleased.
Other tidbits:

• on sex and Jamie’s rape: Gabaldon was asked about Jamie’s rape and offered this insightful and personal commentary about sex in general in her books and this rape in particular.  “One of the underlying themes of the book is what sex is. What sex is, is communication. It can be positive and there are negative forms.” She listed rape and other examples. “It’s not about the rape,” she said of what happens with Jamie and Black Jack Randall. “It’s about what happens to the people afterwards. It’s done for a reason — how do they recover from this or become who they were or a stronger version of who they are.

“I never like to hear people described as victims,” she continued. “I don’t think they have to be permanently ruined. A lot of people put their lives together and go on.” Gabaldon then noted that over the years she has heard from a number of people who’ve been raped who’ve read the books. “I have never gotten a letter from person saying, ‘Why did you write this”‘” she said. “I have had people say ‘Your book gave me hope.'” And then she stopped, tears in her eyes, unable to speak for a moment.

• on Claire’s parents and time travel: Maybe you all had thought of this but this was a “Doh!” moment for me. Gabaldon revealed that at least one of Claire’s parents had to be a time traveler too because it is, after all, a genetic ability. Which then had me thinking — and maybe Gabaldon? — what if Claire meets her parents at some point? Gabaldon also noted that it remains to be seen if Fergus is a time traveler. Hmmmm.

• writing process: Basically, Gabaldon seems to write all the time, either literally or figuratively. As is well documented, she writes in pieces and in scenes, rather than linearly. “I can hear people say things,” she said of characters. “Sometimes I’m inside someone talking to someone else. Sometimes I see bits of stories. One of the last bits I do is write bridges fitting people together.” Gabaldon told a story about being with her husband and him saying, “You have that look on your face. You’re writing aren’t you?” “Something he said triggered something and I saw how a piece fit together,” she said.

Gabaldon also works on multiple projects simultaneously. (If you’re reading this DG, see note re. focus, please).  Gabaldon said she’s working on two novellas at the moment and has written half a modern murder mystery. “I write in airplanes, at airports,” she said, as just two examples of how she writes everywhere. “I have twice finished a book on an airplane,” which enabled her to send it to her agent with this note: “To you from 30,000 feet.” One of these, by the way, was Echo in the Bone.

And finally, this gem. After being asked about how she came up with Claire and explaining Claire’s inception, Gabaldon said, “I don’t like stupid women. Why would I write about one?” Why, indeed.
What do you think about a Master Raymond series? Are there any characters you’d like to see Diana Gabaldon write more about — after she finishes Outlander of course?