The Devil’s Spawn was bound to show up some time.  We all knew it.  No less a surprise whether a Book Reader or Show Watcher.   But, how, when and under what circumstances we wondered?  And, how would Jamie react?  Say what you will about the Starz adaptation, but it is genius to me that even Book Readers found themselves on the edge of their seats pondering how Jack Randall would orchestrate his “Untimely Resurrection.”  Indeed, he landed with a thud on the manicured lawns of Versailles but what happened before and after that momentous occasion has kept us wanting more and continuing to wring our collective hands.  Click past the jump for a full re-cap of Episode 2.05…

Outlander Starz has really made the opening Title Card a “thing.”  I look forward to seeing what it is every episode.  So, you can imagine my delight when the Title Card focused in on the blanket covering a gorgeous horse bearing the symbol of French monarchy – the Fleur de Lis.  A favorite symbol of mine, the Fleur de Lis is an enduring emblem that we still see today stylized on everything from postage stamps to note cards.  A little Fleur-de-Lis trivia — the three petals on the symbol represent medieval social classes.  Those who worked, those who fought and those that prayed.  In the 18thcentury, neither work nor fighting would suit me so I suppose praying it is!  We also notice a proud moment for Outlander writer/producer Ira Steven Behr during opening credits when Episode 2.05’s writer is revealed.  Ira’s protégé, Richard Kahan, wrote this episode – his first produced script for television.  It better be good, kid! 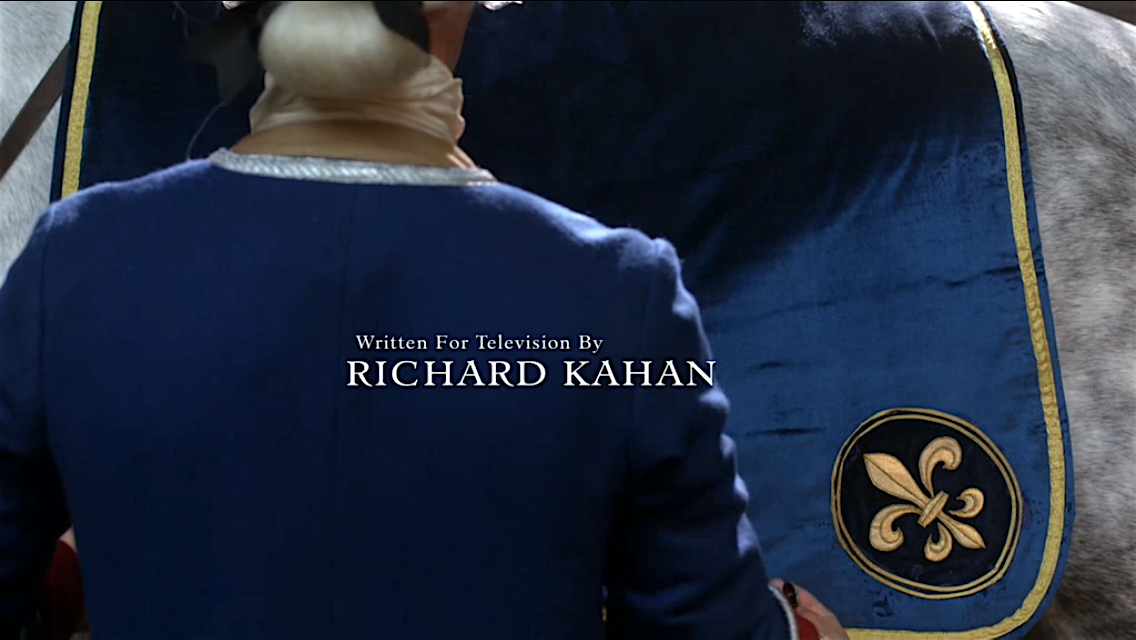 The episode opens with what looks like the aftermath of an Ivy League fraternity party.  Not quite.  Just the remnants of Jamie and Claire’s disastrous dinner party which, as we know concluded at the end of last week’s episode with some awkward brawling and, apparently, some arrests.  Claire’s voiceover tells us that Jamie, Murtagh and Alex Randall all got hauled off to the Bastille after Le Comte St. Germain dispatched the local police to bust up the party.  Jamie returns to Chez Fraser and we see that Claire has been up all night waiting for her man on the chaise while wee Fergus snoozes next to her.  Did anyone else’s heart practically burst watching Jamie carry Fergus off to bed?   We soon learn that Monsieur Duverney, Jamie’s chess buddy and French Finance Minister, bailed him out.  As Claire said, nice to have friends in high places!  We learn that Alex Randall is still imprisoned at the Bastille waiting for Mary Hawkins to set the record straight about his lack of involvement with her attack.  Claire tells Jamie that Alex is innocent and is “not his brother.”  Jamie seems unimpressed.  But, Alex’s prospects – nice brother or not – seem to be falling fast as we hear from Jamie that the Duke canned him as his secretary.

Meanwhile, as the two discuss how to find the perpetrators of the attack on Claire and Mary, once again Jamie has to adorably explain a faux pas when it was determined it was he who spread the news about Claire around to the Paris chattering classes.  “La Dame Blanche” – meaning The White Lady – AKA – a witch – was Jamie’s not-so-smart way to convince Madame Elise’s ladies of the night that they needed to keep their hands off him or they will be subject to La Dame Blanche’s mystical powers.  Poor Claire.  Flashback to the Thieves Hole.  Hard to be mad at Jamie, though, especially when he grabs you from behind and leans in for a nuzzle.  You had me at… aye.
Back at the Wine Warehouse, Murtagh needs a hug when he confesses to Jamie how guilty he feels to have allowed Mary and Claire to be attacked.  He also reports back to Jamie that the gang who attacked Claire are known as “Les Disciples.” Jamie lets Murtagh know he doesn’t blame him but that he should spend some time trying to link Les Disciples to Le Comte.  Murtagh does a bit of foreshadowing when he says, “I will lay just vengeance at your feet or be damned.” 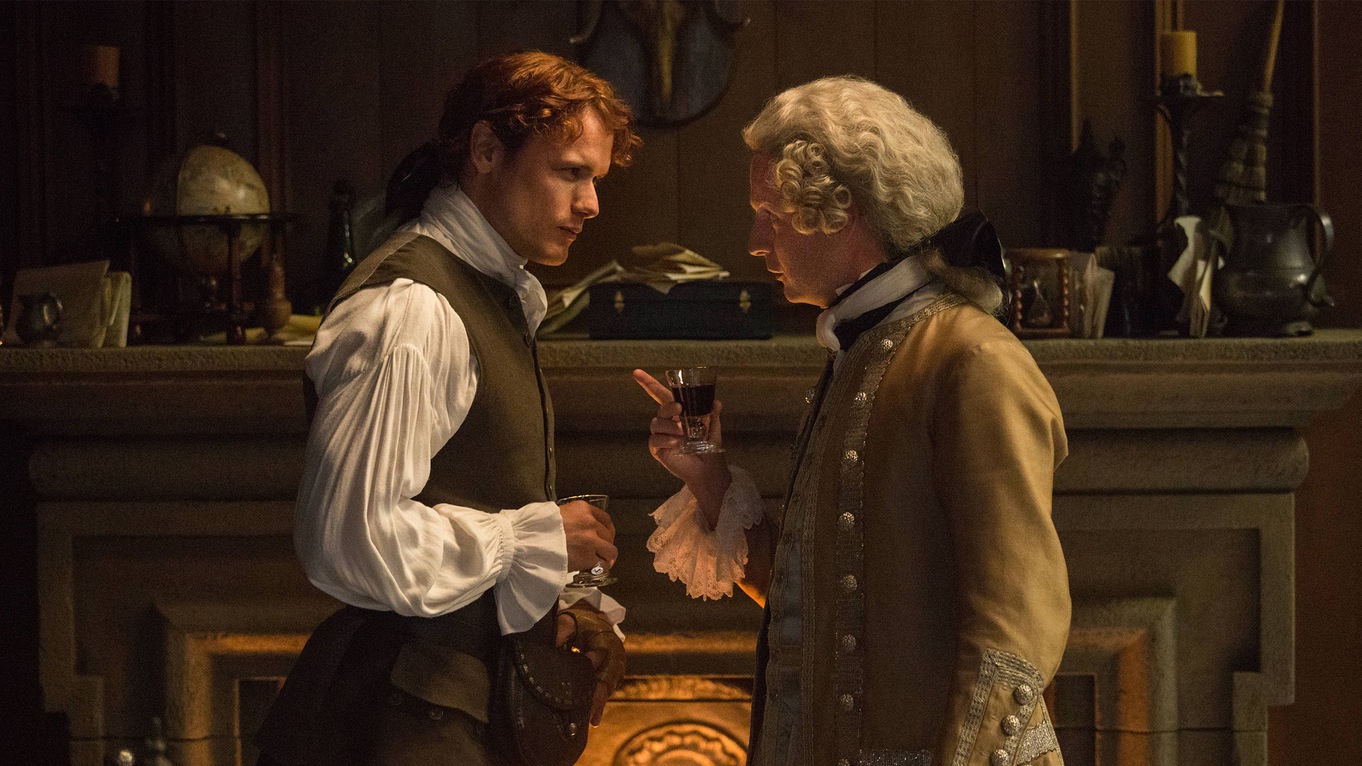 Claire checks in on Mary Hawkins and offers up another version of 18th century sex-ed when she responds to Mary’s questions about the potential consequences of her rape.  Claire considers burning the letter Mary gave her that would clear Alex and spring him from the Bastille.  Frank showing Claire his family tree has really done a number on her as she begins to think about the consequences of Mary going rogue and not marrying Frank’s direct ancestor.  And, what would a Paris episode be without the latest ravings from Bonnie Prince Charlie (BPC).  BPC arrives at the Wine Warehouse demanding a glass of Burgundy and excitedly tells Jamie he’s secured “10,000 pounds (pause for reaction)…sterling” for the Jacobite cause.  The bad news – the money is predicated on a deal he struck with Shifty St. Germain.   Mark me.  The plot thickens as Charles drags Jamie into the scheme by telling him he must be the middle man in the transaction. 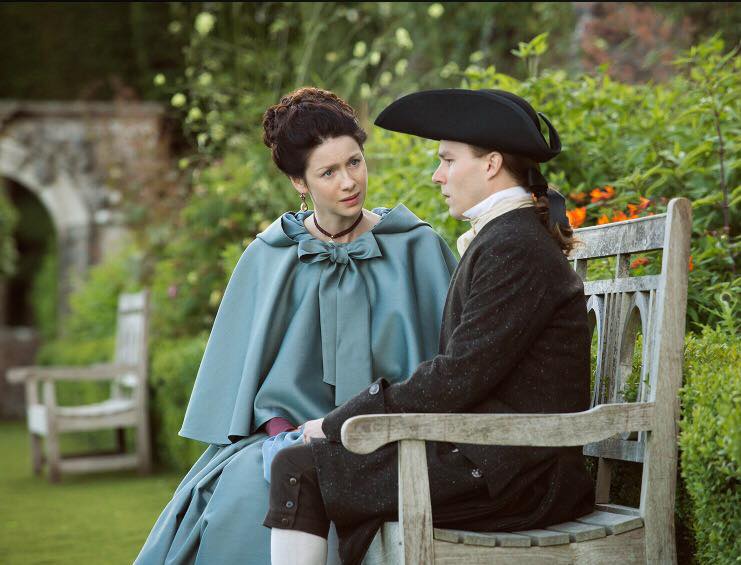 Back to Claire’s mission to break up Mary and Alex.  Claire meets up with Alex and begins to quiz him about his reduced station in life.  I get where she’s going with this but did you ever stop to think, Claire, that you are working awfully hard to make sure that your friend, Mary, winds up with the devil incarnate and not the better brother?   Poor Alex falls right into Claire’s trap as she convinces him that his ill health and lack of gainful employment would not good marriage material make.   Alex slinks away like a wounded puppy… 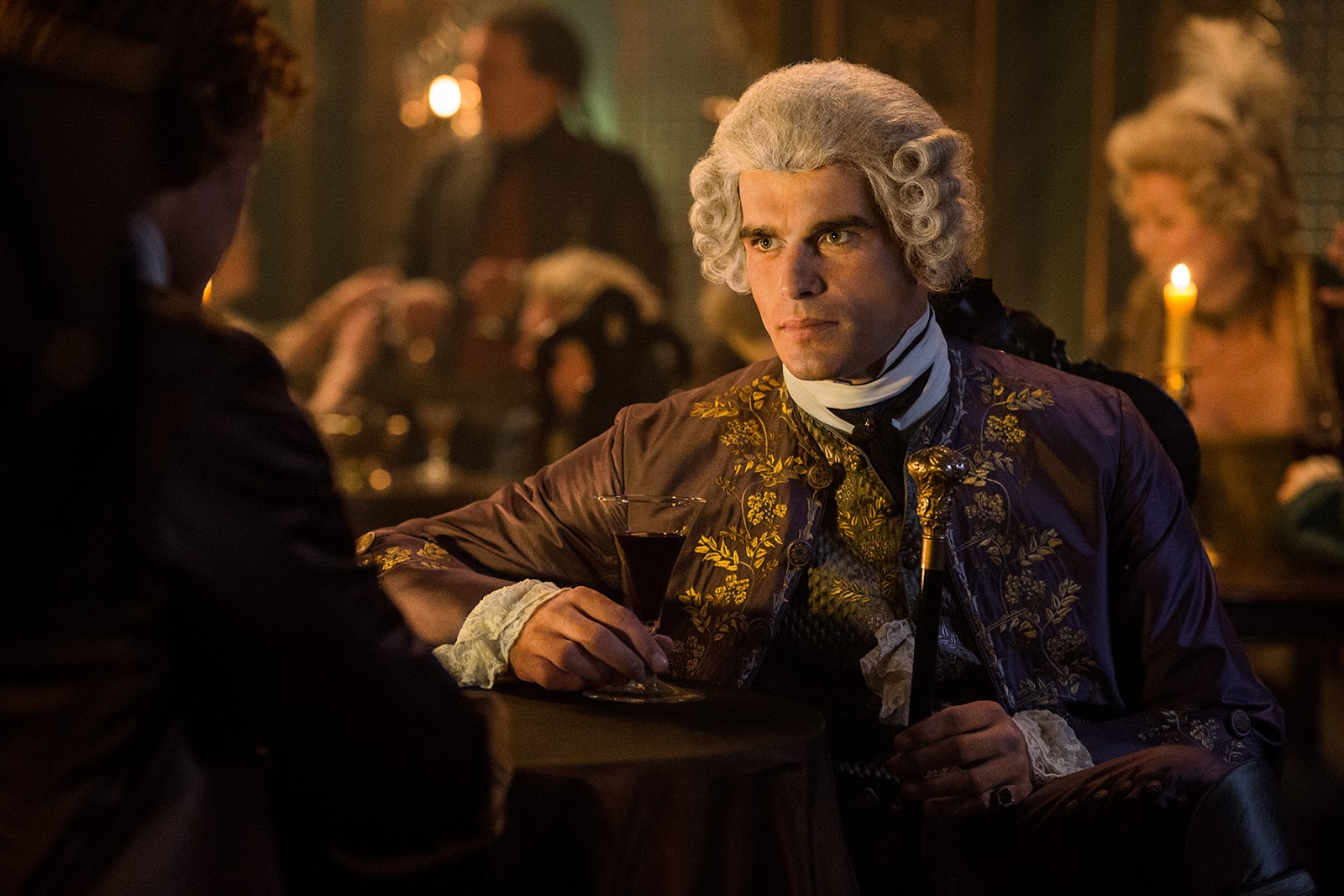 Meanwhile, back at the brothel, some s*it goes down between the alpha dogs when Jamie meets up with St. Germain.  Talk about spontaneous combustion.  More scenes between these two, please!  Nice move with the wine glass, Germain.  Must try that next time I am trying to intimidate my frenemy at the bar.

Back yet again at another ridiculously opulent Jon Gary Steele set, Jamie and Claire discuss how to ruin BPC and St. Germain’s plans.  Jamie presents Claire with a christening gift – a set of heirloom “Apostle Spoons” sent all the way from Lallybroch.  More Christ symbolism despite the spoons gift not being part of the book series.   But, now I have this weird desire to buy Apostle Spoons.  Quite a few available on e-Bay!  Who knew?  Loved this scene between Jamie and Claire, though.   Anytime these two exchange “I Love Yous” is worth a dozen scenes filled with BPC nonsense.
At Versailles again, Jamie helps the Duke of Sandringham pick some horses while the whole time the Duke is ogling Jamie’s every move.   Creepy.  Only good news is that it appears Sandringham figured out what we all know – BPC is an ass!   While Jamie is occupied with Sandringham, Claire runs into Annalise de Merrilac – Jamie’s ex.  They take an awkward stroll through the gardens until Annalise points out that there is a man staring at Claire.  Thud.  Devil anyone?  Yes, Black Jack Is back and still doing that thing with his mouth.  Stop.  And, the way he says “Claire” when he comes upon her.  Totally inappropriate given the setting.  But, I suspect the (insert obscene epithet here) doesn’t care.  Just when I start to think Claire is getting ready to knock Jack upside the head when he refuses to let her leave, he says, “The King” to which Claire responds with the line of the episode – “F*ck the King!” Ooopsie.  Claire turns around to find King Louis and entourage.  Girlfriend – you better hope he didn’t hear you! 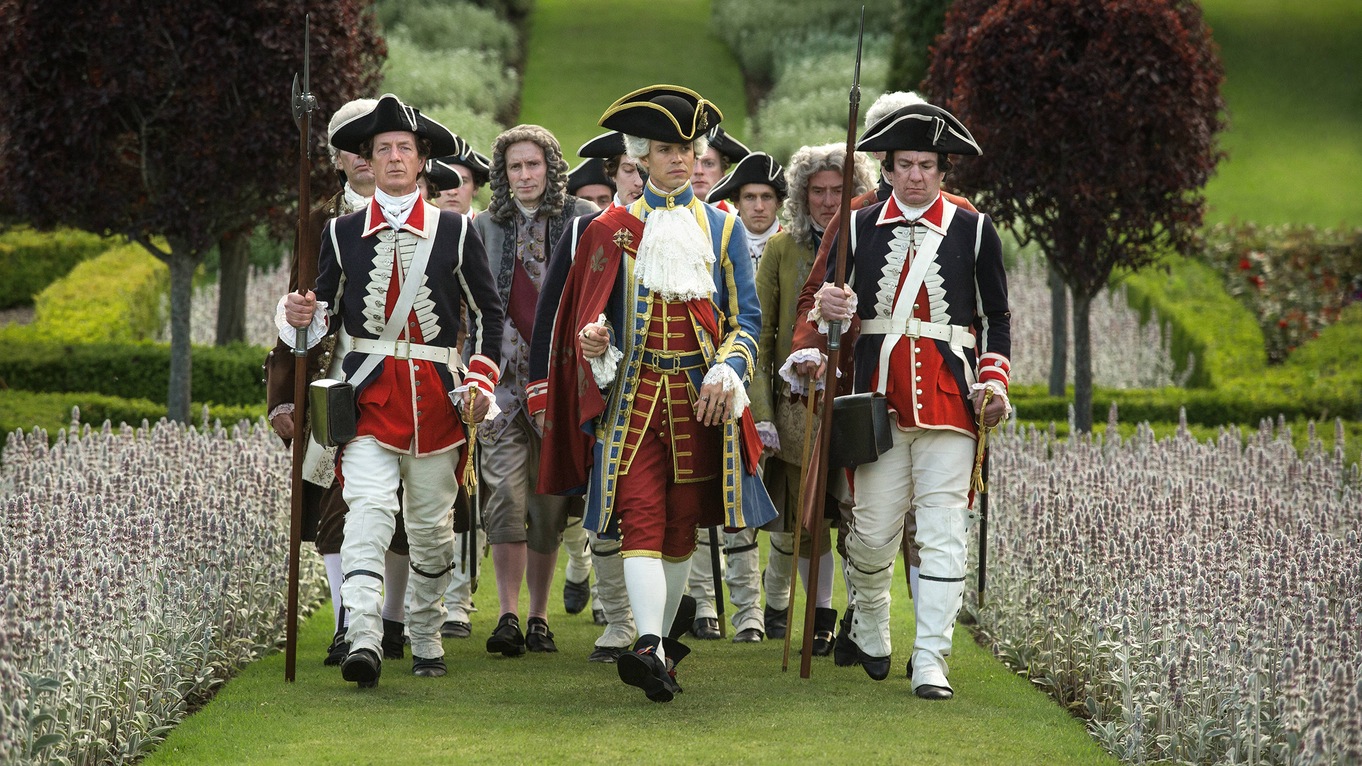 What happens next is horror mixed with pure giddiness as Louis toys with Black Jack much like Black Jack has enjoyed toying with others.  But, before that, another cardiac moment when Jamie arrives on the scene and without much eye contact proceeds to exchange niceties with Jack.  I have new found respect for Louis as he clearly sees something is amiss during this awkward exchange.  Louis literally puts Black Jack on his knees as the Outlander fandom roars with approval.  And, while we are at it, how about a shout-out to Lionel Lingelser for his portrayal of Louis the XV.  A fascinating character study.  Once he is off – ahem – his throne, the King is proving to be a real scene stealer.

The King dismisses Claire who is feigning illness just to put some distance between her and the (insert another obscene epithet here).  Jamie checks on Claire and then asks her to wait while he turns around and strides with deliberation in the direction of Black Jack.  Losing count at this point of my own cardiac arrhythmia, Claire stands helpless watching.  Based on this week’s “Inside the World of Outlander” segment, the episode writer, Richard Kahan, eluded to the fact that he had written some dialogue in this scene for Jack and Jamie.  As we know, Jamie challenged Jack to a duel but the scene was shot at a distance (from Claire’s point of view) and with no audible dialogue.  I actually think this was a brilliant move on the Director’s part. It increased the tension for sure and left all of us with our hearts stuck in our throats as we wondered if Jamie would take his vengeance right then and there. 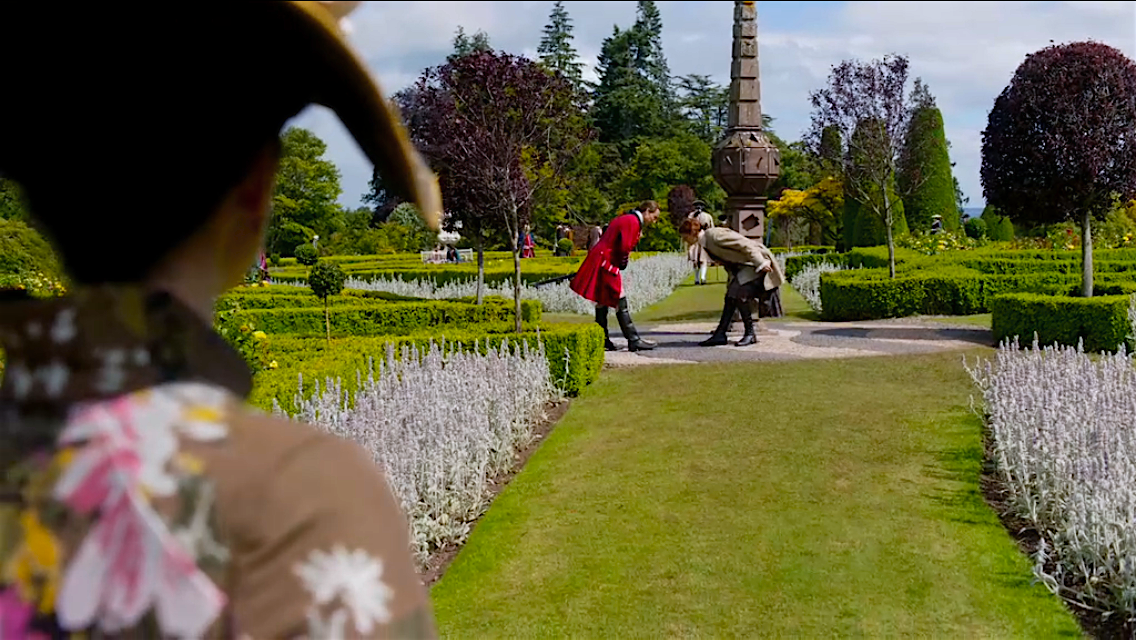 And, if there was any doubt that the old Jamie was back, we saw it in this scene.  Back and better than ever.  He could practically taste the prospect of revenge and it showed in Sam Heughan’s ever expressive face.

Back at the Fraser apartment Jamie and Murtagh begin to prepare for the showdown with Black Jack.  After detouring to the Bastille, Claire arrives home and announces that plans for the duel must be delayed due to the fact that she landed Jack in jail by making a false accusation.  Needless to say both Murtagh and Jamie thought Claire mad for taking such a risk not to mention foiling Jamie’s plans to seek his revenge.
Now, I’ll stop here and say, that as a book reader, this particular series of events angered me like nothing else when I first read it.  I remember being so worked up that I yelled out loud — “Claire! How could you?” This was my “throw the book” moment.   Honestly, while intellectually I get why Claire wanted Jamie to delay his vengeance, I couldn‘t rationalize how she could deny him knowing in excruciating detail how Black Jack tortured and brutally raped her beloved.  I still don’t completely understand and my heart breaks for Jamie.  But, bravo to Sam Heughan for a powerful and emotional performance.  Jamie – you ARE an honorable man.  How you were able to maintain your composure and not slap Claire silly is beyond me.  Powerful end to the episode punctuated by Jamie’s steely “Do not touch me!” Oh, no – does this mean another droughtlander in the bedroom for our lovers?  I can’t take it.
What did you think of Episode 2.05?  What was the most gut wrenching or heart stopping moment for you?