The King of Men Arrives and Meets A Fox: Recap of Episode 208 “The Fox’s Lair”

From the moment the opening  title sequence emerges, we know that Outlander has closed the door on France and has re-emerged to the lush images of Scotland along with the haunting battle scenes to come.  Even Bear McCreary’s music evokes that return with an ominous undercurrent as we hear the drums and bagpipes. Then, the title card for The Fox’s Lair displays said canine. As far as title cards go—it is a straightforward  introduction to THE  character of episode 208, The Old Fox, Lord Lovat.
Jenny From the Broch Returns…Briefly

We flow into images of  the Highlands, along with an uplifting musical cue, that  similarly brought us to Lallybroch the first time in season one, episode 112 (also written by Anne Kenney and directed by Mike Barker).  It is both soothing and healing, as it is meant to be, for Jamie and Claire. Emotionally exhausted from the deceptions and schemings in the French Court and tragically scarred from the loss of their “Faith”,  the Frasers return home to heal and find peace in living the simple life with clan and family. Hoping that their efforts in Paris had put a halt to the machinations of the Jacobite rebellion (tsk, tsk Claire, the Comte is dead, not Prince Charlie) and yearning to map their future in Lallybroch, Claire in voice-over, quoting Robert Burns, knows better… the best laid plans of mice and men. 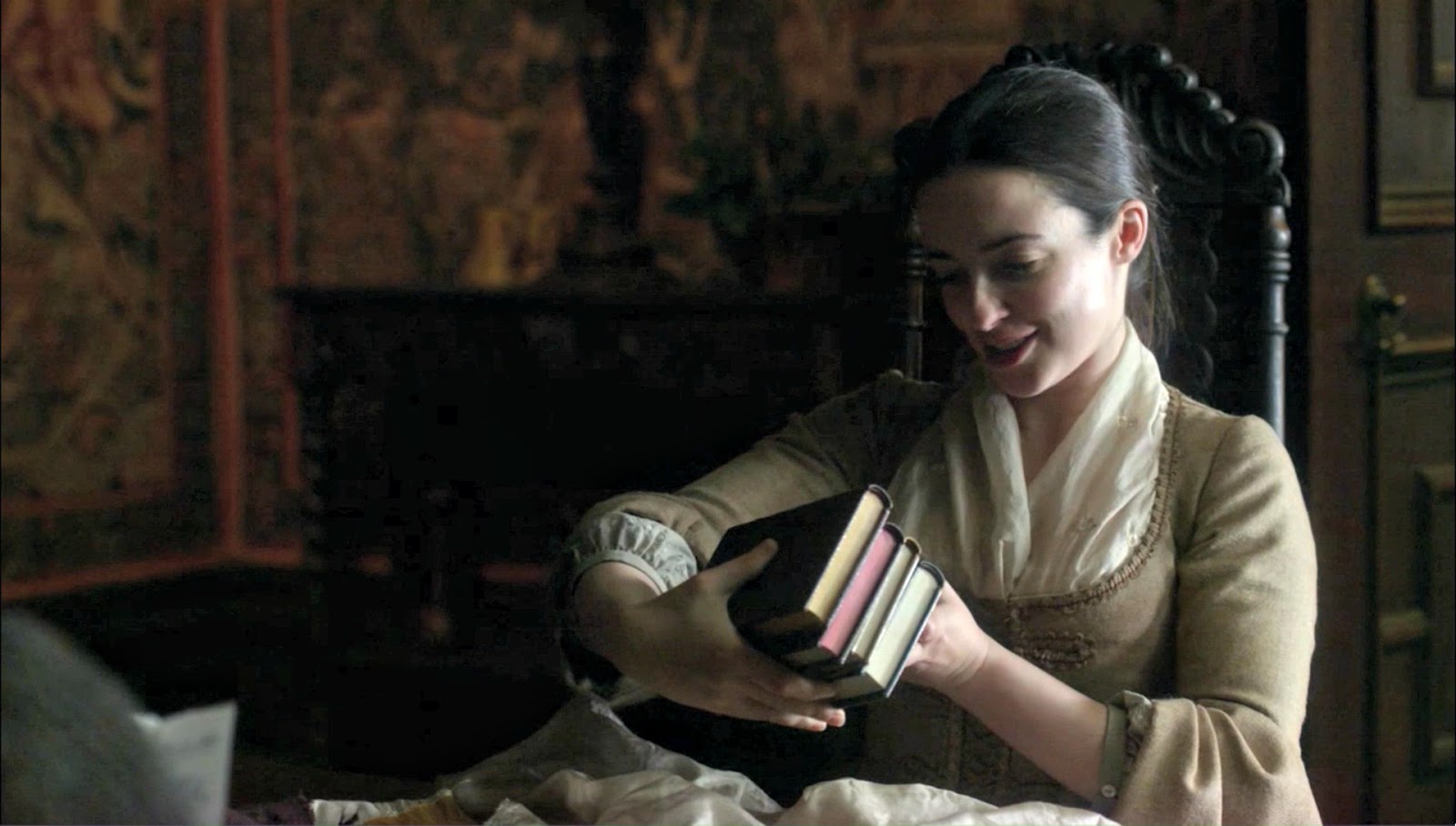 Lallybroch is flourishing—a new crop of potatoes has been successfully harvested and Jenny has provided another niece, however the scene immediately reveals that the Prince may have been down but not out. An ominous letter for Jamie arrives, proving that Charlie is pretty good at forging signatures. Now, Jamie finds that he has “signed” on to a public declaration supporting the Stuart’s claim to the throne and therefore is cast as a traitor to the Hanoverian dynasty.  Even in these brief scenes, Anne Kenney brilliantly inserts a lot of bits and pieces that book fans will “squee over” without bogging down the momentum that is building up.
The King of Men Emerges
Early in the first half of this season, some voiced concern—“where is the Jamie we know?”.  He did  not seem like the Jamie that was evolving in the latter half of season one—or what book readers knew of.  It appeared for some to be a character disconnect, rather then a continuation of a process. Here is  the emergence of a mature Jamie, as the laird—unlike his first awkward attempts at it, in episode 112.  With the devastating news that, in spite of their efforts, the rebellion is moving forward, a despairing Claire pleads with Jamie that they should just leave it all and start anew in Ireland or the Colonies.  But Jamie (king of men) can not abandon family and tenants  to the fated consequences of Culloden.  Unlike Claire, who believes there is nothing she can do despite her foreknowledge, Jamie asserts that, in fact, it has and does make a difference —she has saved many with her medical knowledge and altered the course of others lives i.e. Louise de Rohan’s decision to not terminate her pregnancy.  To protect his people, family and future, he fully commits to the rebellion- perhaps this is the way to change the course of foretold events (Bear’s piece “The Losing Side of History” tells us otherwise).  Team Fraser is back working together to achieve that goal.
I love how Ms. Kenney’s Jamie/Claire bedroom scene flowed into Claire’s waking to the sound of voices—  a wee bit of deja vu from episode 112 (hey, I thought we left France). However instead of a clash between Jamie and Taran MacQuarrie, she brings us to a beautifully heartbreaking moment. Cradling his infant niece, Jamie pours out his heart to her, something he will never do with his own. 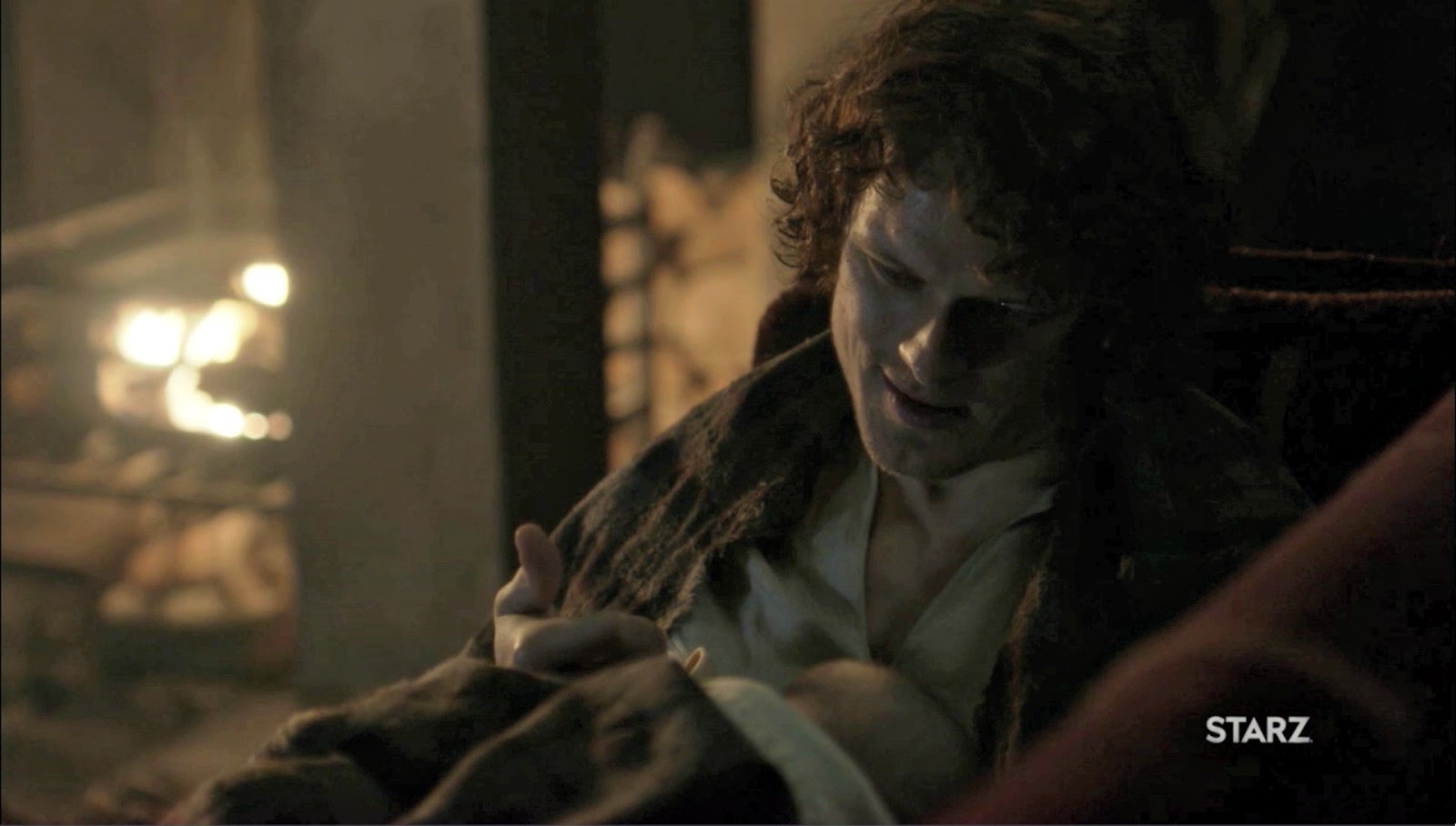 The Shark Jumps into The Fox’s Lair
With renewed optimism, Jamie and Claire set off to Beaufort Castle, seat of the Fraser Clan chief, Simon, Lord Lovat.  At the Prince’s urging, Jamie visits Grandpa Fraser in the hopes that he will commit clansmen towards the rebellion.  One would not describe this as a warm family reunion.  The Lallybroch Frasers have been marginalized ever since Brain Fraser married Ellen MacKenzie—Grandpa never approved the match nor did he desire an alliance with the Mackenzies.  But the Old Fox is ruthless in achieving his goals, and he has no issues in switching alliances.

For more about this real historical figure, I refer you to check out my post: Meet the Frasers: Delving Into Jamie’s “Real” Ancestory
So who do Jamie and Claire encounter upon their arrival?

Surprise…it’s Uncle Colum…you remember, from Clan Mackenzie. What’s up with that?  Apparently,  the Old Fox will be exploring all his options. Is a warming of relations with the Mackenzies possible?  Clive Russell makes a grand entrance as the Old Fox- sharp as a blade, callously clever and misogynistic -he immediately dismisses the sassenach “enough breath has been wasted on women..leave us”.   However, he also appreciates that same shrewdness, wit and backbone which is so evident in the grandson when Jamie responds to Grandpa’s less then stellar opinion about his choice in a wife: “at least I had no need to take a wife by means of rape or trickery”   Touche!
That evening in the great hall, Jamie’s diplomatic and political skills are tested against two masters in this game. Wishing to remain neutral and  not to encourage any of the clans to engage in the endeavor, Colum undermines Jamie’s arguments in support of the cause. Meanwhile Lovat remains noncommittal and the Young Fox is in over his head, falling figuratively flat on his face as he tries to impress Laoghaire.  Did I say Laoghaire?   Say what??? Yes, she’s back as part of the Mackenzie entourage.  Apparently, repentant for the part she played in trying to have  Claire condemned as a witch back in season one. But has she given up on her infatuation with Jamie? 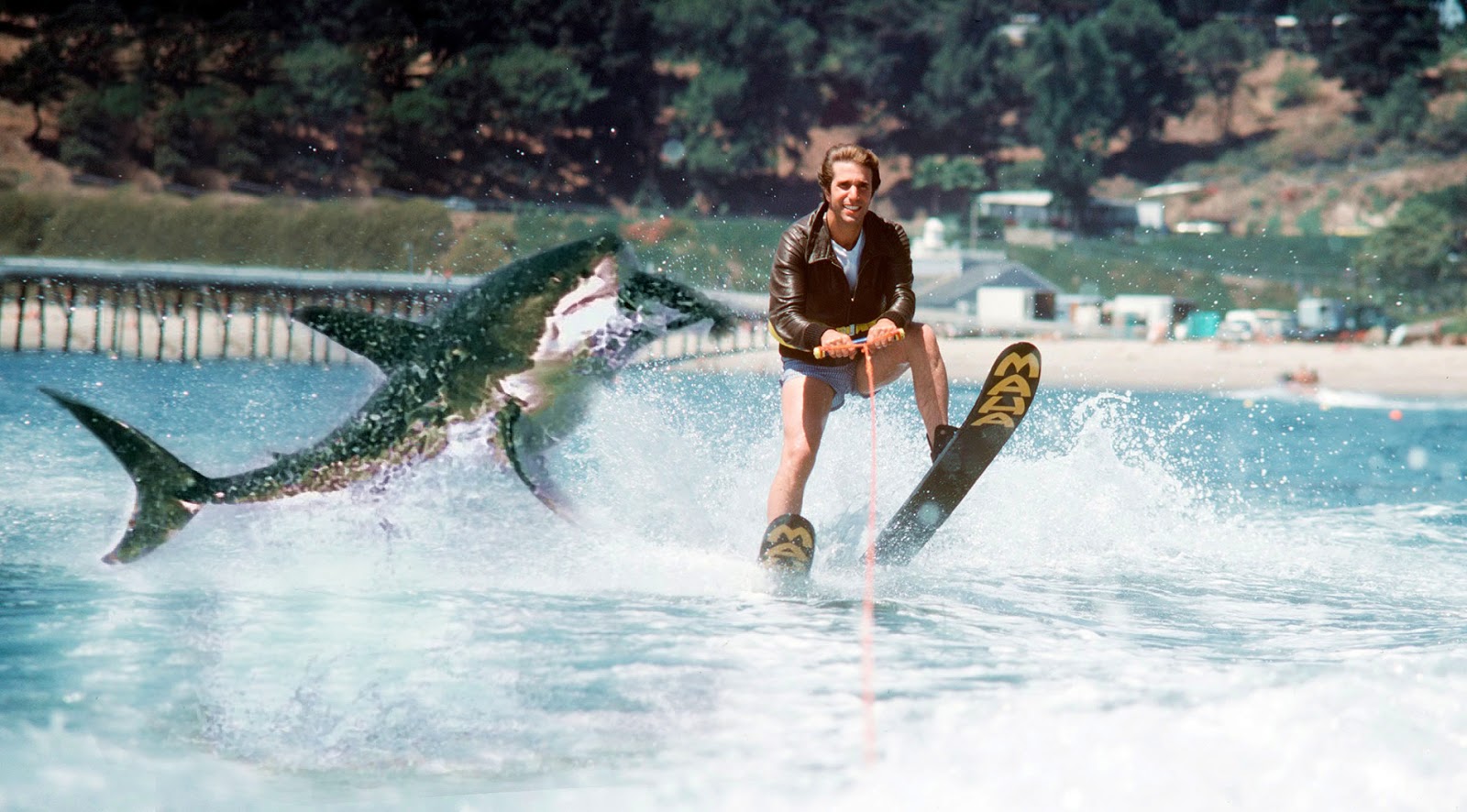 Diana Gabaldon had been using the phrase “jumping the shark” is connection to this particular episode and social media went wild speculating as to what she was referring to and what did she really mean. Sure, the insertion of Calum Mackenzie into the political machinations and a supposedly repentant Laoghaire into the plot were deviations from the book—but  how is it any different from any of the other plot changes which were created for this TV adaptation? It certainly does not veer off track in any way that truly breaks from the overall essence of the story.

Jamie can certainly hold his own, one on one, with Gramps. Lovat wants Jamie’s sworn oath of fealty in exchange for men and arms, but it is never simple with Frasers. Grandda  is a brute and will do whatever he can to get what he wants- but Jamie knows Lovat’s Achille’s heel: fear of  witchcraft, and so Claire as La Dame Blanche is safe but Lallybroch remains vulnerable. So what can the Lord and Lady of Broch Turach do to get Lovat’s support without giving up Lallybroch?  Enter- Laoghaire.  With the lure of gaining forgiveness and maybe even favor  in Jamie’s eyes, Claire recruits Laoghaire  in a scheme to boast Young Simon’s confidence, enabling him to stand up to his father, commit to the Jacobite cause and as a result, obtain Lovat’s support without sacrificing Lallybroch.  Scheming seems to run in the family.
Witchy Woman 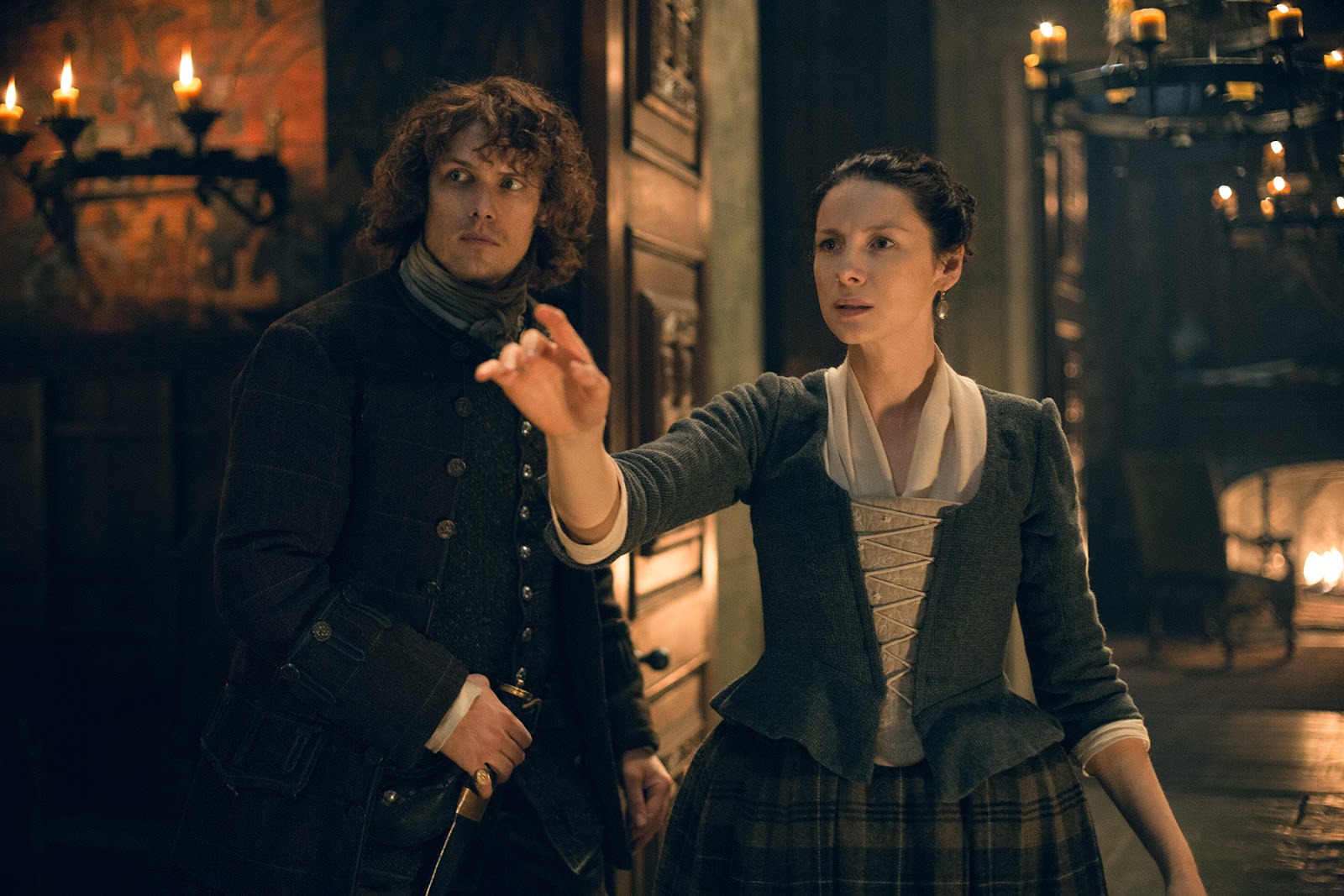 Unconvinced about the potential success of a Stuart Restoration, Colum remains neutral and will not support the cause. Lovat’s ultimatum  weighs heavily on Jamie’s shoulders as we are once again in the great hall. The Old Fox demands Lallybroch or he will sign the neutrality pact with The Mackenzie.   But as Jamie is about to sign off on his cherished  Lallybroch, Claire goes into La Dame Blanche mode -“foreseeing” Lovat’s fate at the hands of the royal executioner—but whose executioner?  She sees white roses.  Never one to miss a beat, Jamie joins the performance and announces that it is the royal executioner of King James.  The drama does not completely convince Lovat to join the Jacobite bandwagon but he will not force Jamie to sign away Lallybroch.  The only  Lovat Fraser that will join Jamie is Young  Simon.

Wiley As A Fox

If you were not yet convinced, this last scene shows why Lord Lovat is the Old Fox.  As Jamie, Claire and Young Simon are on the road to muster with the  Jacobite army, they encounter hundreds of clansmen—who are they? Fraser men, of course! Grandda rides up and places them under his son’s command. If the Stuarts return to the throne, Lovat can claim he aided the cause but if the Hanoverians remains in power, Simon’s neutrality agreement allows him to distance himself from the Jacobites. Jamie gets the men he needs without giving up LallyBroch…“tell me I’m nothing like him, Sassenach” 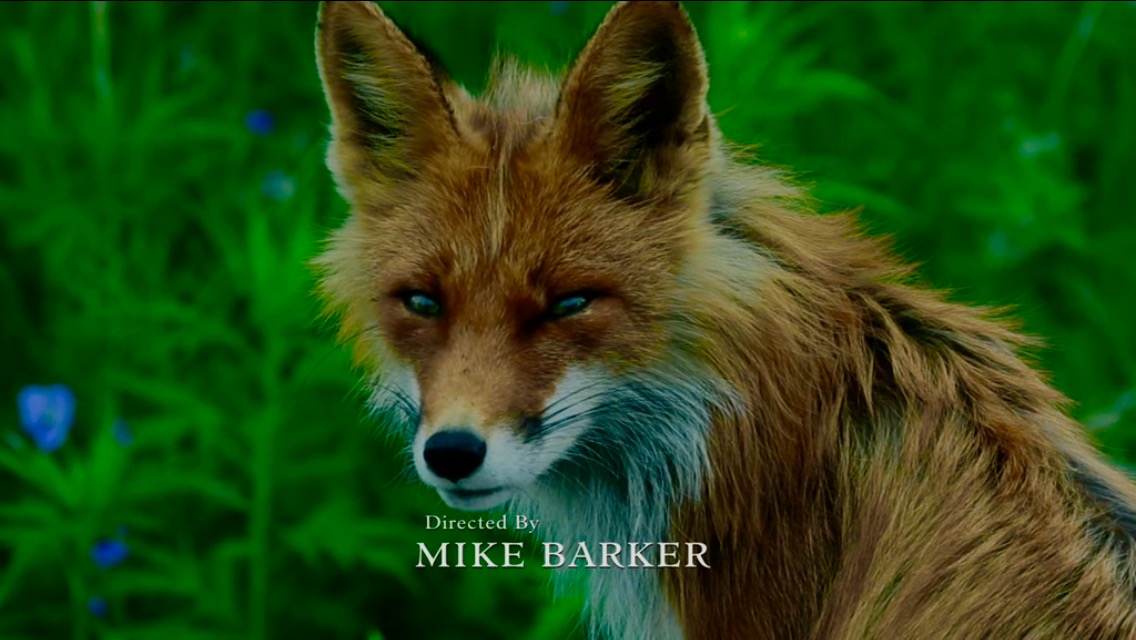 So what did you think of The Fox’s Lair?  Did it really “jump the shark” for you?