I keep saying, “It doesn’t get any better than this.”  And…then…it does. Every location exceeds the location before it and every travel experience touches me deeper than the one before.  I seriously am out of adjectives at a little over the half way point of the trip.  This country is truly life-changing.   And, it’s really not just about Outlander or my love for the show.  Clearly, that was a spark for me to come here.  But, it’s become about the indescribable landscapes, the spackling of the sun (yes, SUN!) off the munros, moors and lochs, the haunting hum of the wind through the scotch pines or the roar of the wind off a ridge that stops as suddenly as it starts.  And, sometimes just waking up to the growling tune of a bagpipe…somewhere.  I only have my words to describe it but nothing really does it justice.  Because every day the experience just gets bigger than me.  Compared to the things I have seen here, nothing seems quite as important or significant.  Read more after the jump…

Still based in Inverness for the time being, we looked forward to a trip to the mysterious Loch Ness.  As I have found, there are a lot of lochs in Scotland, but there is a particular allure about Loch Ness.  Its geology is unique in many ways.  Both the depth (over 700 feet at its deepest) and the fact that peat growing below the surface makes the Loch deep black in color.  The Loch itself divides two volcanic plates that are distinctly separate.  And, then, of course, there is the beastie. 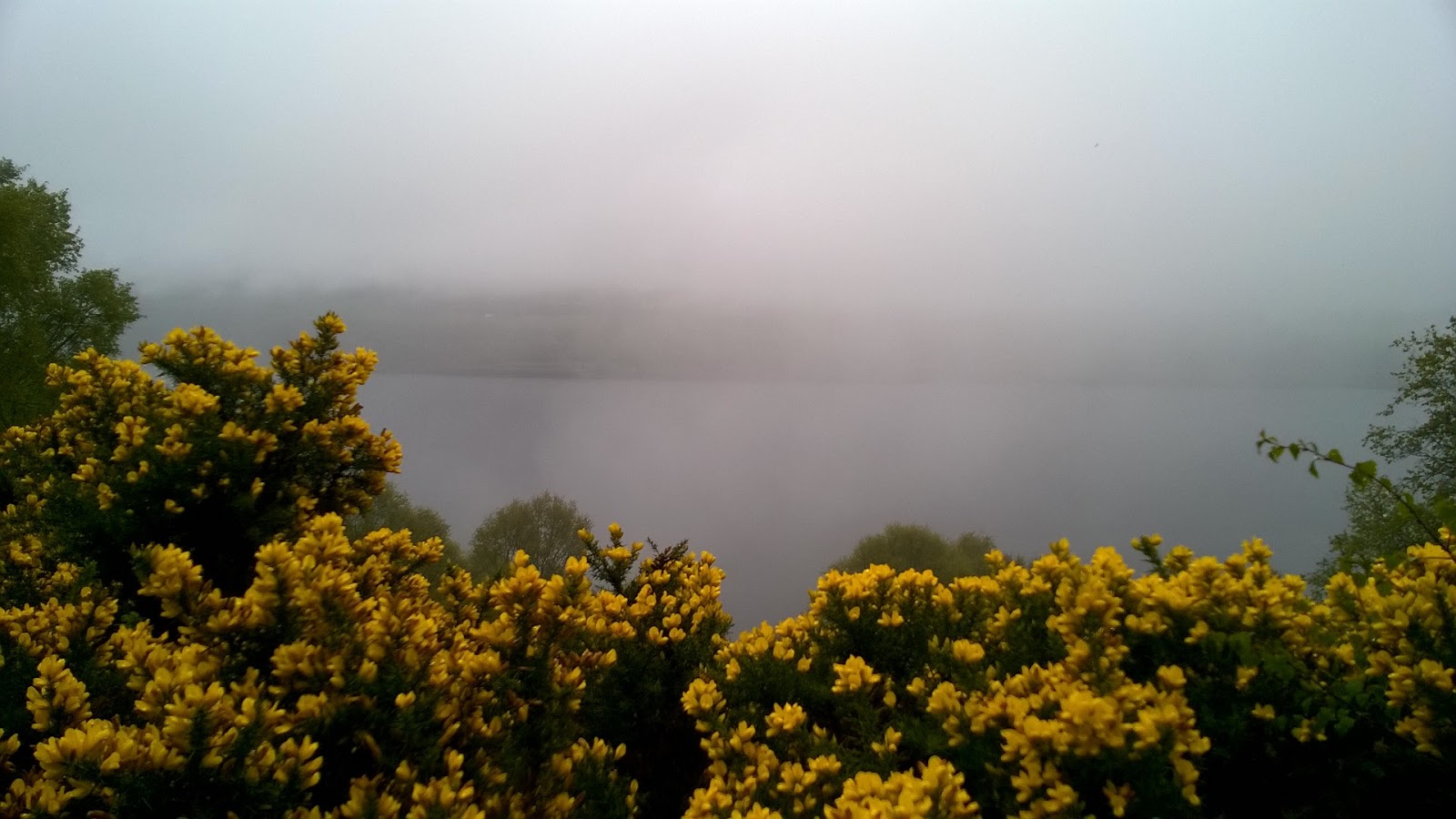 We started our morning with a rainy, cold hike on the cliffs above Loch Ness.  There were some haunting views from above made even more so by the opaque Scottish mist that settled lightly just above the Loch’s surface.  We saw many native plants and flowers along the trail – all dripping with the wet that seemed to get thicker the higher we climbed.  We stopped about half way up to read the passage from “Outlander” that described Claire’s encounter with the monster.  I listened and stared off across the length of the Loch thinking maybe I might see, too.  When we reached the top of the trail head, we wandered out onto a stone road and made our way down — passing many crofts along the way and cottages usually bearing a Gaelic name inscribed on a wooden board near the road.  We made our way from there to the shores of the Loch where a bright-eyed, old Scot named “Gordon” took us aboard his modest boat.  We started off across the Loch and Gordon regaled us with stories of the many expeditions at Loch Ness over the years.  Some were to find the beastie, but others were to uncover other mysteries of the Loch.  Gordon’s boat had a sonar detector on board.  I was curious and asked him about it.  “Ever see anything unexplainable, Gordon?”  “Aye,” he said.  “But, what I have seen lacks an explanation.  That’s different than unexplainable.”  Indeed, it is.  As we motored back, I began to think that ole Gordon may know more than he is saying… 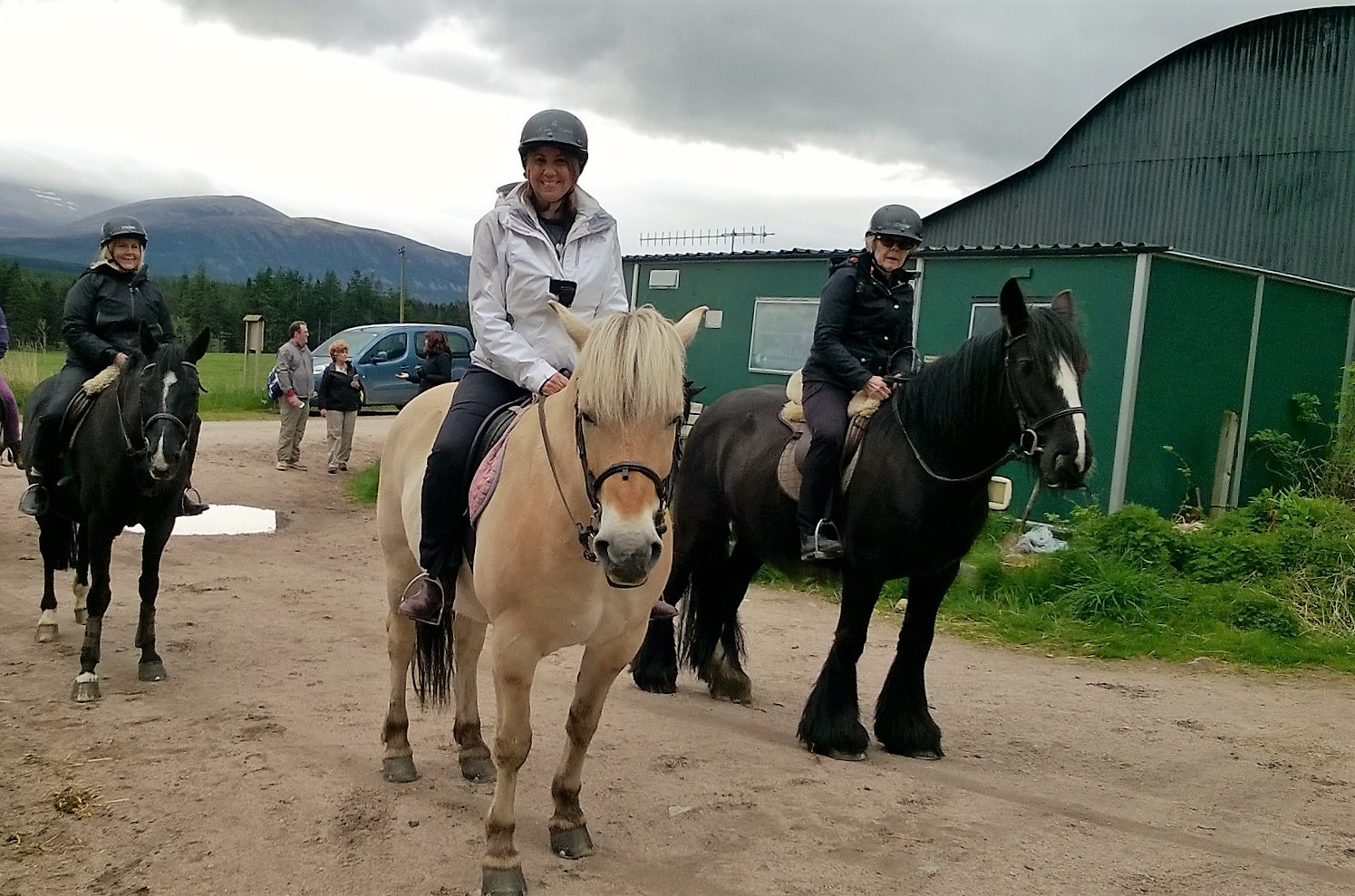 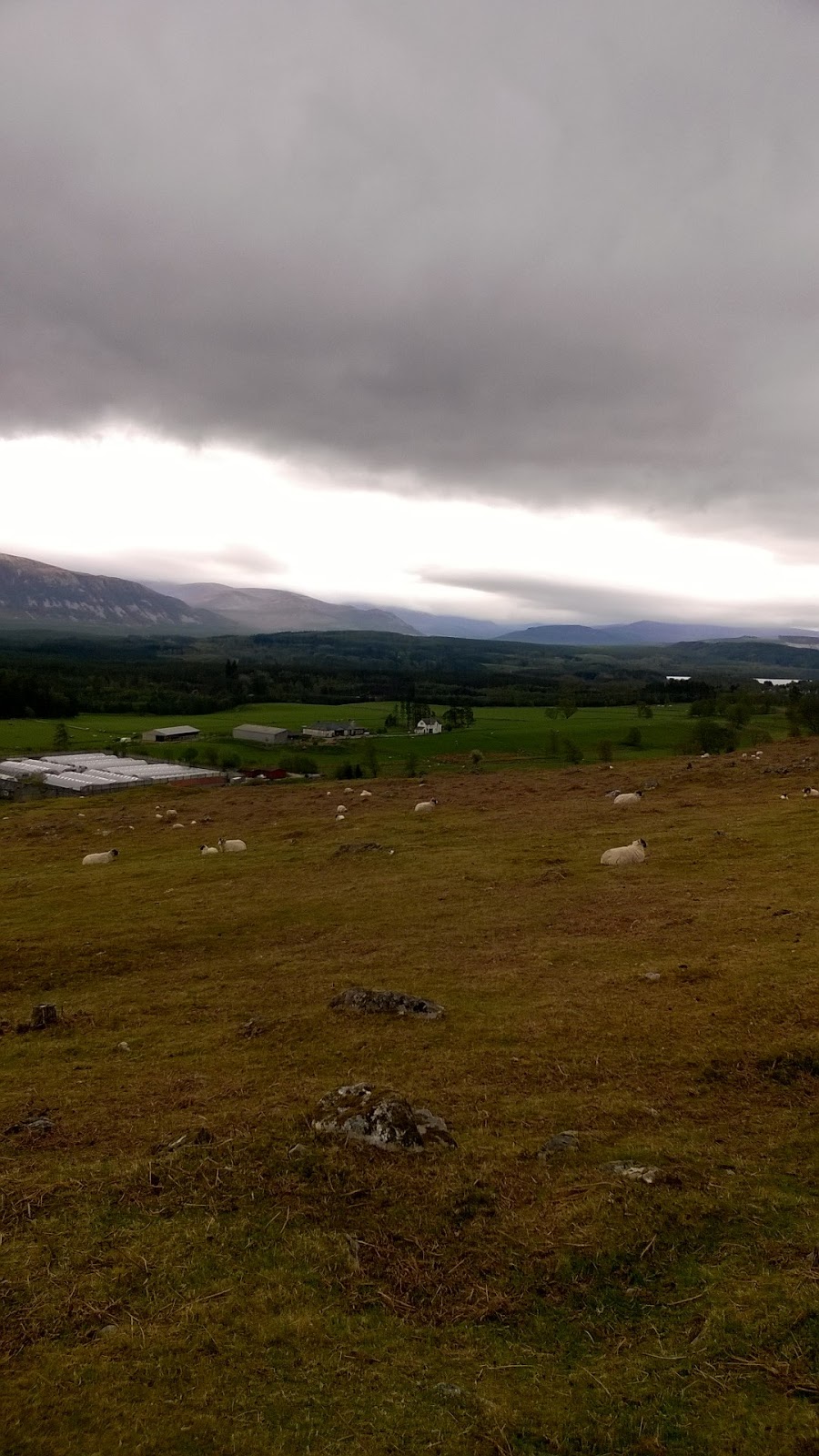 It was time to start our descent out of the Highlands and back towards Edinburgh.  But, first we would have the opportunity to see Scotland’s beauty from an entirely different perspective – aboard a horse!!  We made our way to stables in Aviemore.  We later found out that the Outlander Starz production team stabled the horses used for Outlander there.  Perhaps I would be trotting along the same ground as Sam Heughan’s horse Sleepy (also known by the much more manly stage name of “Donas”)???   That little bit of information was just gravy to me, though, as we started our trek up a steep incline above the deep, deep green fields dotted with sheep.  My horse, Emar, seemed a bit bored by it all yet eager for any chance to nibble from the branches as we passed by.  When we reached the summit, it became 50 shades of green as we looked down the middle of two mountain ridges in the distance and rays of sun slicing through the clouds that had formed while we were under cover of the forest.  Really hard to describe as I am just a mere mortal (see opening paragraph!) but astoundingly beautiful.  Back at our “Big Hoosie” in Alyth that evening, we prepped to leave the next day for Perthshire, another hike and another unique Scottish experience that involves some dogs, some wool and some knitting needles. 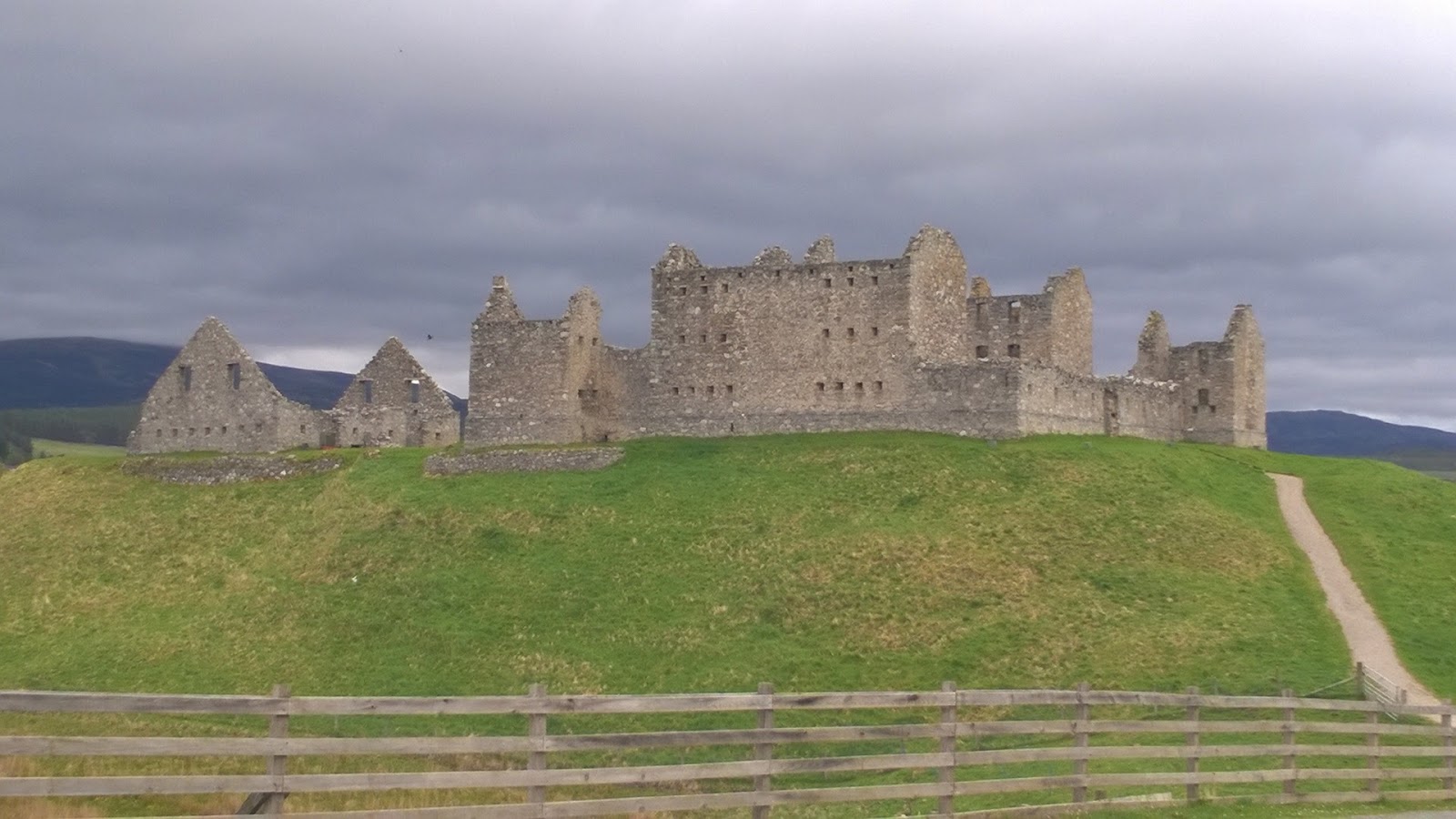 Continuing our way south, we stopped briefly at Ruthven Barracks – an English fort and prison from the 1700s.  It was much like what Ardsmuir probably would have looked like in “Voyager.”  A grim place.  One would never want to be imprisoned there.  The wind and some rain swept in while we were meandering through the roof-less remains of the old fort.  It was the first time during the trip that I felt a chill run through my bones.  Maybe it was the cold or maybe it was the unearthly sense of the thousands of Scots who had been imprisoned and died there after the rising of 1745. 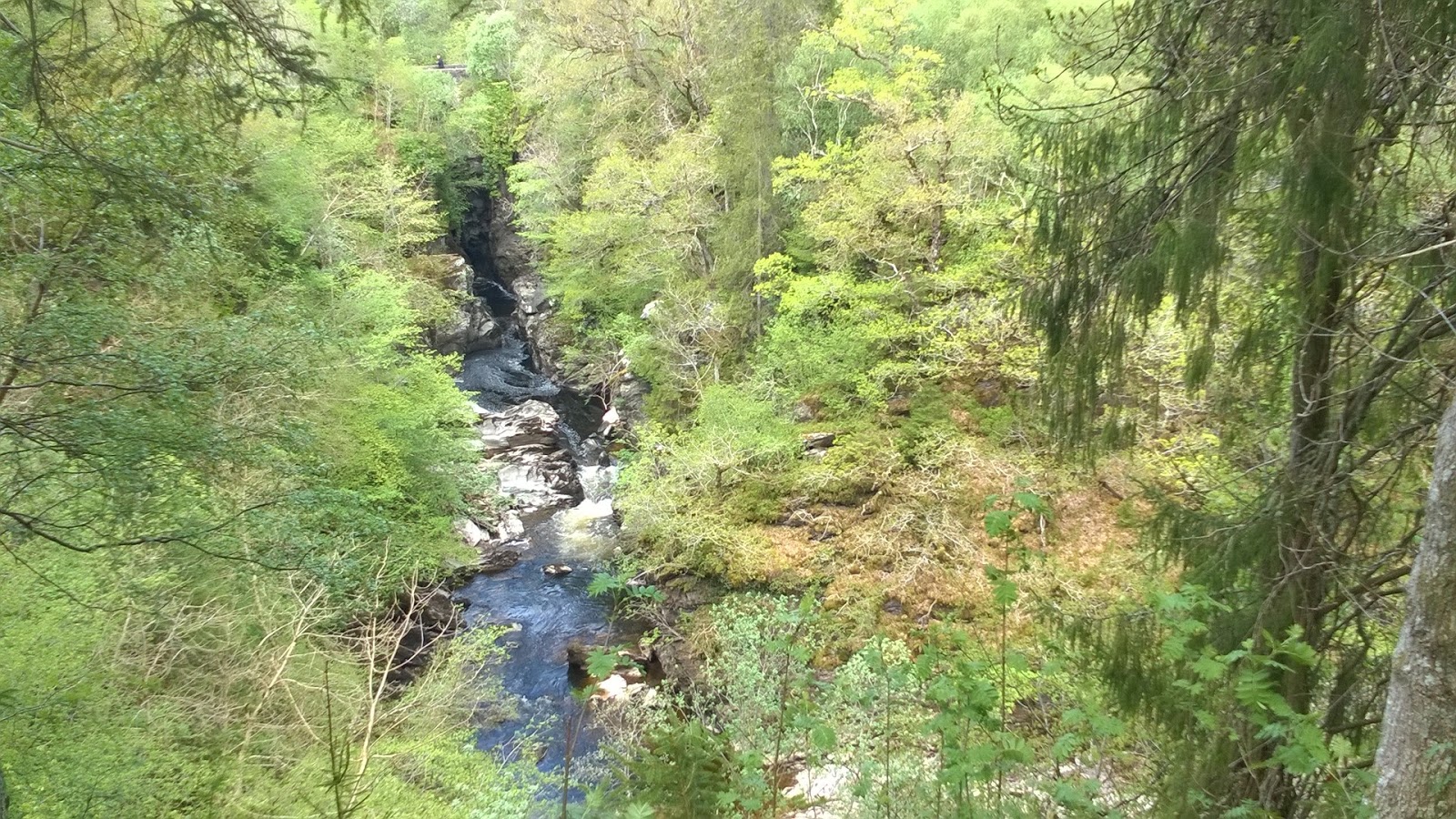 Mid-day found us in Dunkeld along the River Tay.  Some consider this the lower Highlands while others say it’s the dividing point for the lowlands.  Either way, it’s a charming little town with significant Jacobite history.   A little over half of my tour group opted for shopping in town.  While the rest of us followed our intrepid tour guide to the trail head to hike the Birnam Trail.  It was 3 hours of magic not to mention every bit of Scotland weather there is.  Except snow.  We didn’t get snow.  It was, however, probably my favorite hike of the trip to date just because we covered so many different types of terrain.  After climbing steeply up a wooded hill next to a stream, we made our way across large open plains around which were scattered farm houses and even some 1700s ruins.  Then, we made our way back through a forest and besides several roaring waterfalls before finding ourselves in the middle of some of the tallest trees in the UK.  I logged something like 18,000 steps on my fitness band.  It was a perfect day and the trail gave us the very best of Scotland in every single way.  Shortly after we finished, I found there was still time for some shopping in town.  I quickly ran to the vintage shop I had seen when we arrived earlier at the car park.  I love finding treasures, especially old and unique things.  It was a very small shop.  I could lay down and with arms outstretched, probably touch the walls.  I made a couple of passes – circling.  The second time around my eye caught a small jar filled with silver spoons.  I always look for unique spoons and use them as serving pieces for sauces to accompany main courses at a dinner or brunch buffet.    I picked out a few from the jar to look more closely.  I recognized one as an Apostle Spoon.  I would NEVER had known this had I not seen Outlander Episode 2.06.  But, there it was – clear as day – a small figure of a man on top of the spoon.  St. Andrew, perhaps?  I couldn’t believe my good fortune.  But, little did I know that the Episode that was about to air the next evening (Episode 2.07) would make this vintage find even more appealing.  Sometimes it’s just better to be lucky than smart! 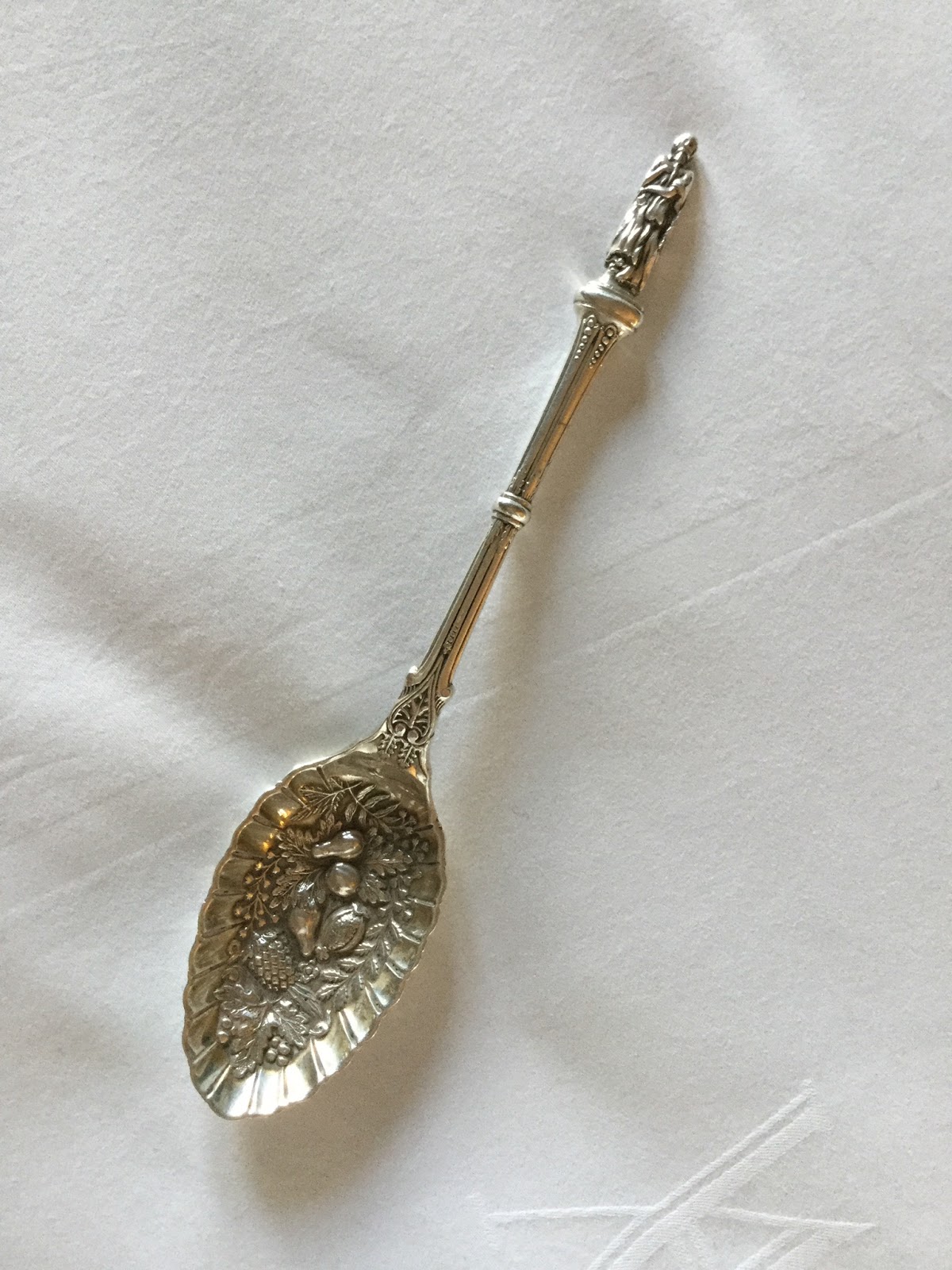 So back to unique Scottish experiences.  Our last day on tour we visited a working sheep farm in Perthshire.  Our delightful host, Colin, was the real deal.  He owns and oversees a farm of over 600 sheep, some cattle and horses.  His wife runs a small wool business in the nearby barn.  And, some of their children help out as well.  Colin introduced us to his 3 border collies – Shug, Nell and Mist – and gave us the opportunity to watch as he put all three dogs through their paces herding a group of about 20 sheep in a nearby pen.  It was fascinating to watch and to hear Colin direct the dogs with a series of short commands made somewhat unrecognizable by the shepherd’s thick Scottish burr.  The dogs were amazing and clearly loved their “job” on the farm.  I know more now than I ever thought I would know about the sheep farming business.  But all the while I was thinking how appealing this type of life might be.  It was clear it was hard work and 24-7 work at that.  But, I saw the light in Colin’s eyes and recognized it as the passion that he has for his land and the creatures he supports there.  He seemed like a happy man and content.  Can’t ask for much more than that. 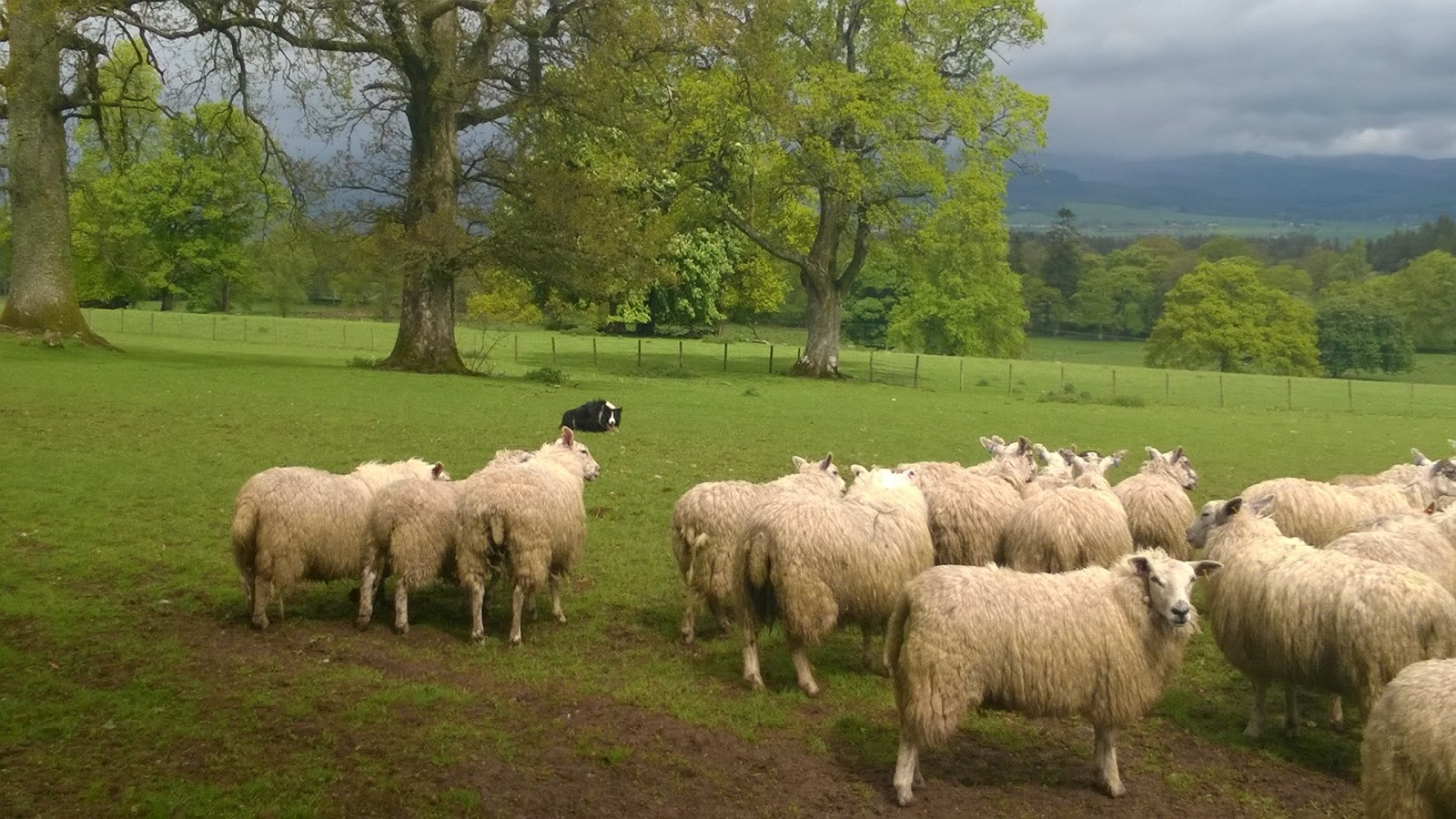 Culross….also known as “Crainsmuir” where a lot of s*it went down in Book 1 for Claire and Jamie.  It is somewhat like the town that time forgot.  1600s and 1700s era homes line the cobblestone streets.  The town itself sits right on the Forth River and served as a popular port in its day.  Absolutely beautiful gardens line the hills behind the homes and we could see the type of home where Geillis Duncan might have lived given her status as wife of the Fiscal.  Outlander filmed the scene here with the tanner boy – the ear nailing – as well as used the setting of Culross’s town square for the building of the pyre that would we see Geillis being led to after the witch trial ended unfortunately for her.  Lovely town and close to Edinburgh – just across the river.  If you are in Edinburgh with only a few days, I highly recommend you pop over to Culross.  It would be a quick half-day trip but you’ll get your Outlander fix and then some. 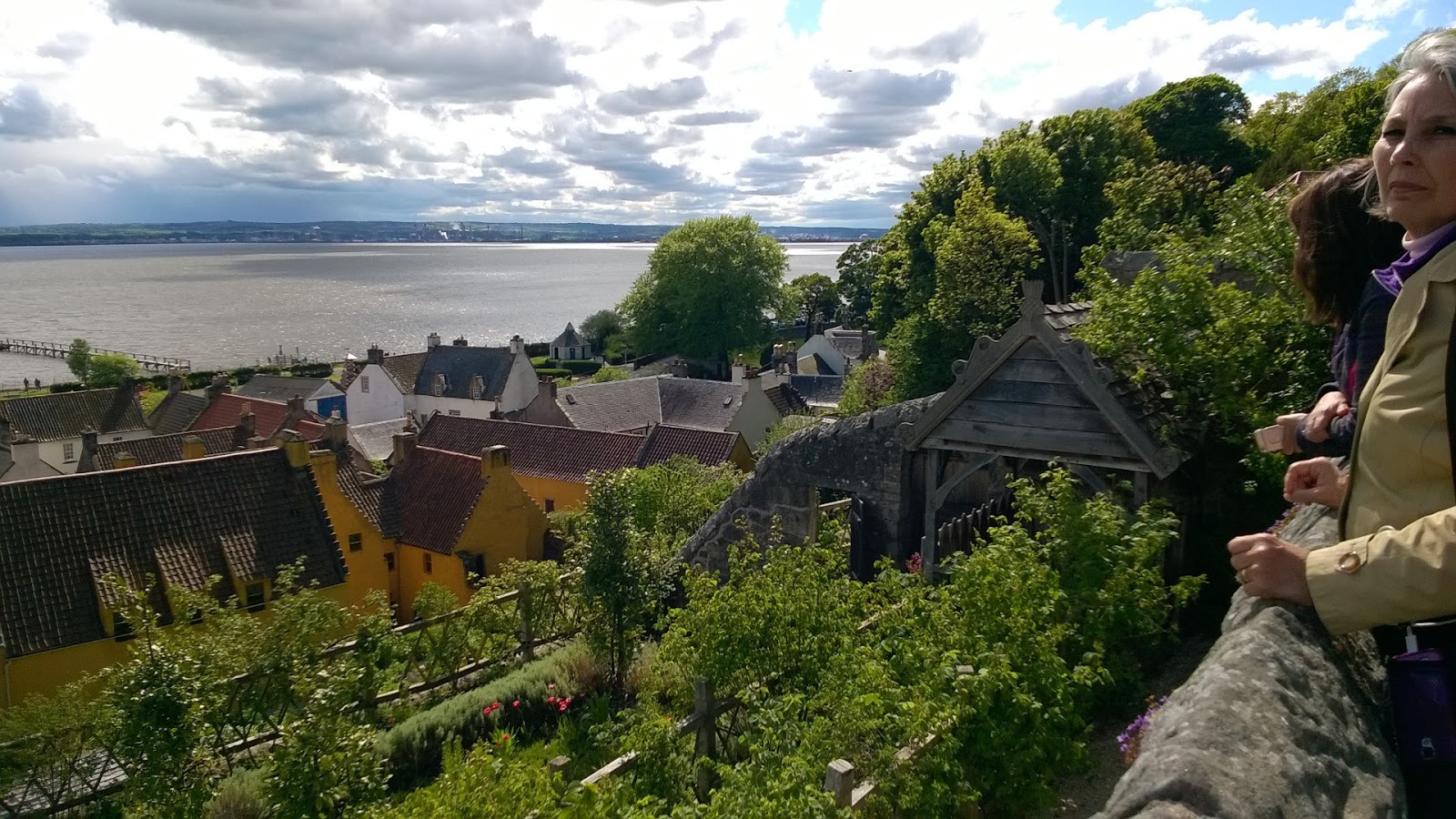 I am behind a bit with these diary entries.  I have already made my way to the Isle of Skye and it is truly glorious here.   Can’t wait to tell you all about it.   Also, hope to tell you about my one-day tour of Outlander Starz TV locations and the “A.Malcolm Printer” tour of Edinburgh city which I took this past Sunday and Monday.  Both outstanding.  But, I am off to find some kind of stable wi-fi signal so I can get this Diary entry posted.  Skye is amazing but their connectivity needs some work. 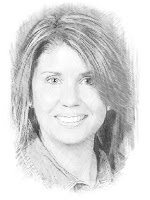 Missed the previous entries in my Scotland Diaries? Find them here:
A Sassenach Abroad
Ready, Set, Scotland
May 13-14 Edinburgh
May 15-17 Castles, Kirks, Cairns and Culloden

Until next time, Sassenachs. Slainte!

If you’ve been following along, what has been your favorite part of this journey? Would you take a hiking tour or would  you have hit shops?