Out of Faith: Fan uproar over an extended scene

So, a clandestine un-aired extended version of Season 2 EP. 7 “Faith”, written by Toni Graphia was released into the fandom ahead of the DVD release. I saw it when it was retweeted by episode’s director Metin Huseyin, with immense praise for Sam. And then Diana got involved, as how could anyone seriously not love that performance. And from it all, fans cried foul. “Why was it cut?” This scene was perfect! We NEEDED this!”

After seeing Season One’s edits, and discussing their rationale, irate book-fans mostly understood what was necessary for adaptation to a visual medium. These cuts made sense.

But this time, this particular edit bleeds particularly deep among fans- both book but now, also TV-only fans. And of course, some fans went all personal in their criticism, which really wasn’t constructive. Thankfully, there were more than enough fans with respectful critique.

Like many of you, I’ve re-watched almost every Outlander episode more times than I can count. “Almost every” means that, like many of you, that list excludes three episodes- Wentworth and To Ransom a Man’s Soul from Season One, and Faith from Season Two. These episodes are heart-wrenching and thus hard to watch, yet amazing and award-worthy for their acting, treatment of issues, and story editing.

Well, perhaps exception lies in “Faith” – the scene in the apartment after Jamie returns from the Bastille. But unlike most book-fans, I’m not looking for a re-telling of the books, verbatim, I am looking for character development and emotional connection.

In May, everyone loved the aired Faith episode. But also immediately there were rumblings- two of them really, and they both had to do with Jamie. 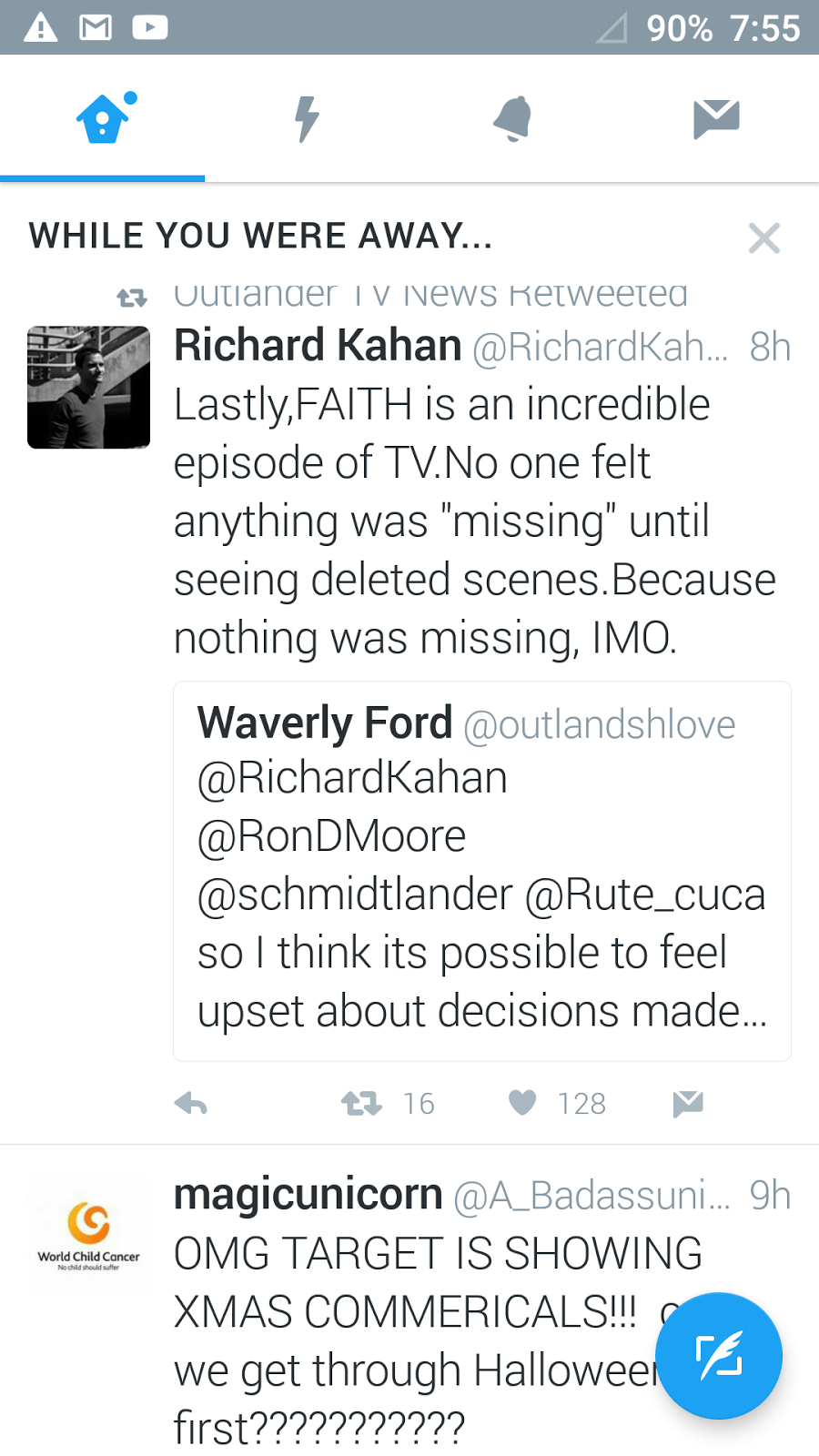 First, his beard was hideous and for some fans incredibly distracting. Second, many fans felt Jamie cared more about returning to Scotland…

…than he did his own wife or first born daughter. And now, after viewing un-aired version, I realize they both could have been better resolved during editing.

First, the beard. It almost felt gratuitous, like a “tada!” reveal after Jamie first spoke. Woah! It sounds like Jamie, and kinda looks like Jamie. Isit Jamie? But in the un-aired version you see him before he speaks – you understand just by looking at him, even if it’s just for a few precious seconds, what’s happened to him before he has to utter a word. When he does speak, you can get past “the beard” and focus on performance.

In the aired version, Jamie does pretty well supporting Claire and helps guide her through grieving. But there’s no contest, in the non-aired version, he leaves his heart on the floor, letting us understand he was emotionally invested in this child too. Claire was weak, then strong, now weakened again- the rollercoaster of enduring this loss and grief alone at first, then together with Jamie. 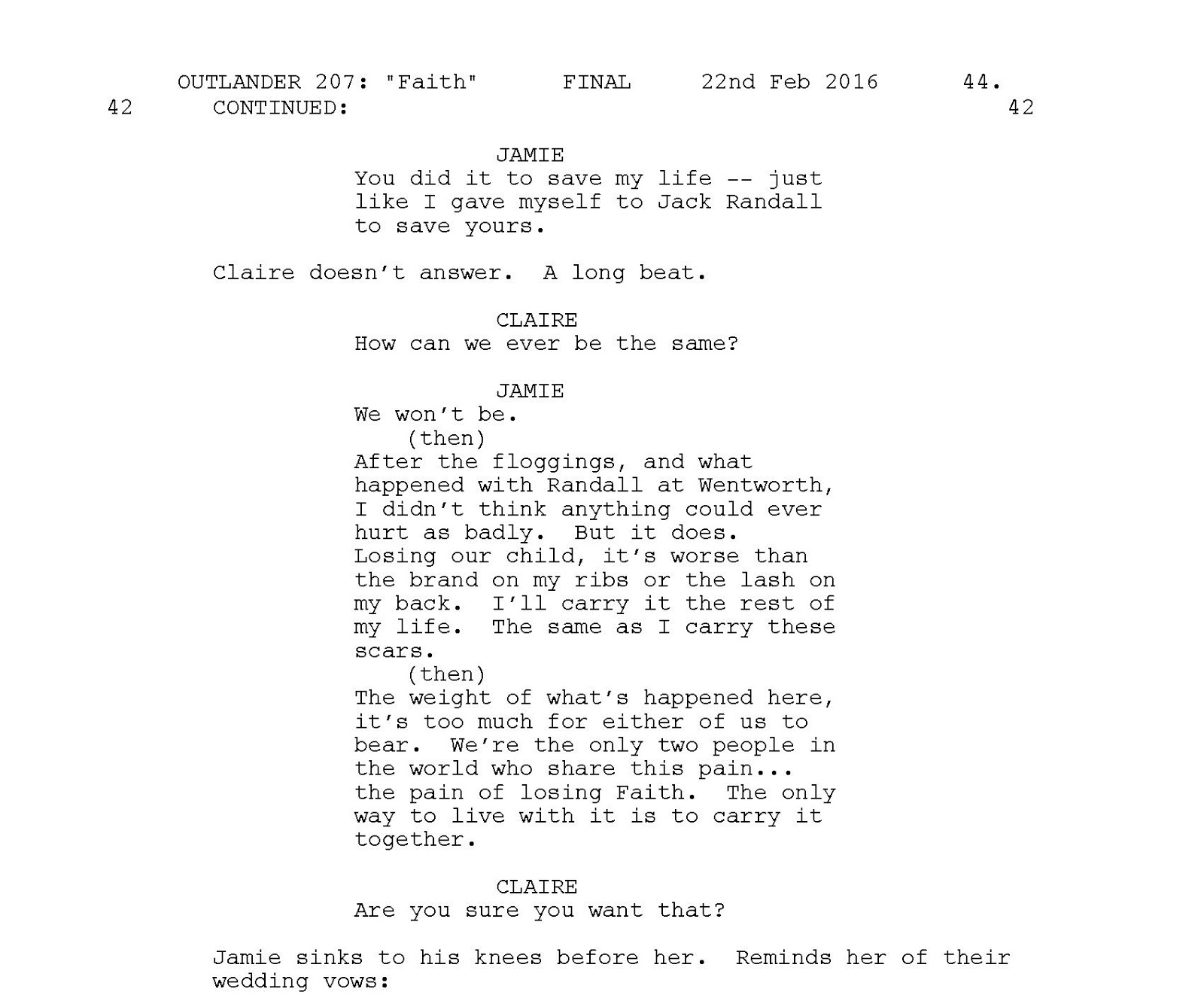 In this last scene, she needed Jamie to guide them back together when she saw no such outcome herself. Not merely just “carrying it together” or going back “to Scotland”, Jamie, as husband and Faith’s father, needed to show the effect on him and remind Claire why and how they are committed to each other. That is what was missing from the aired version. When you consider in context, the emotional connection which was promised but was not delivered when they returned to Lallybroch (EP. 8), this extended scene was exactly what was needed.

What would have worked better: The episode already came in at over 63 minutes, long over the usual and allowable length of 56 minutes, so fan appreciation is definitely in order. However by utilizing the non-aired version almost fully, and instead editing the scene at Faith’s gravesite, down to Claire reaching her one hand out to Jamie and then the other hand placed on the grave stone, it would have accomplished the emotional arc that was necessary for the two characters – a mother and a father – in this episode.

I am a huge fan of Ron D. Moore. He gets almost everything right, almost all of the time, and for that I am so grateful. But as he begins the edits for Season Three, I hope he takes into account the total range of emotional connection between Claire and Jamie. It is the cornerstone of the books, and must be that for a successful TV series. While the Outlander story is centred on a strong and wise female protagonist and the world that revolves around her, Claire still needs to play off not only the failings but the strengths of Jamie.

I have often wondered whether Season 2 was too much to task. I think Ron’s involvement was substantially reduced, even during editing, and the roles of the Producers shot way up, on a project (Dragonfly in Amber) that was by far, the hardest to adapt in the Outlander series. Too few took on too much. I look forward to hearing Ron’s commentary and plausible explanation for his editing choice on the DVD (due out Nov.1 so get your orders in!) No doubt, there will be stirrings over anything cut during this contentious season (ie: hand scene).

Season 3 should be appreciably better. With four writers hired, producers can focus better on their roles. They’ll probably be better able to stick to the version that was story-boarded and written- something Season 2 didn’t do as well.

Short of that, there’s some pretty amazing fans who understand what it takes to adapt the story (and I’m not self-serving – there are other fans I would select), so Outlander could always use them as a focus group before finalizing their edits. Just saying.

Do you agree with the final edit of the Faith episode or do you think we needed the extended scene? What are your sacred cows in Voyager (without getting too spoilery)?