Into the Darkness: Finding Personal Light through Outlander

I discovered Outlander this spring when my family moved to a new house.  On the day of the move, I went to the house early to wait for the cable installer.  My partner was coming later with the movers. After the cable was installed, I had a TV but no furniture and really nothing to do for the next two hours.  I clicked around on Starz (a bonus of the new cable package) and came across Outlander.  My reading passion has always been historical fiction and nonfiction and my taste in television has tended to follow in that vein as well, so I thought that I would give it a try.

After watching the first episode in a completely spellbound state, I immediately went in search of the source material.  I realized quickly that there was a bigger story behind those onscreen looks and I had to be a part of it.  I thought that I had stumbled onto a series that I could watch in my occasional free time and that I could neatly tuck away during other moments (I’m looking at you, Downton Abbey).  Nothing could have prepared me for the emotional journey I was about to take…

This is where the story gets a bit (a lot) dark.  If discussions of abuse or violence are a trigger, you should stop reading here.

I was in an abusive relationship for 2 ½ years.  The last nine months of it were violent.  I carried shame, grief, agony and other indescribable emotions with me through that relationship and into the months that followed it.  I went to counseling.  I continued being a fairly decent mother to my daughter.  And, I found a wonderful man who I hope to spend the rest of my life with.  Everything worked out for me.

But, what frustrates me is my inability to express that period of my life in words.  While I feel like much of my healing is complete, I wanted a record of the events in my own voice.  I wanted – needed – to tell the world what happened, both as a cautionary tale and as a survivor’s story.  I wanted desperately to publicly claim the victory that I worked so hard for.

Reading and then watching the Wentworth Prison scenes and their aftermath forced me to relive in a visceral way the torture that I endured at the hands of the man who declared his love for me on a daily basis.  While most of the torture was emotional, there were physical elements and I felt them again right along with Jamie.  Those scenes reminded me of the shame and grief that I felt during that time and how desperation will cause us to do and become things that we could have never imagined. BJR broke Jamie.  My partner broke me.  I thought so often about giving up.  I believed for awhile that my life, damaged and broken as it was, was not worth fighting for. 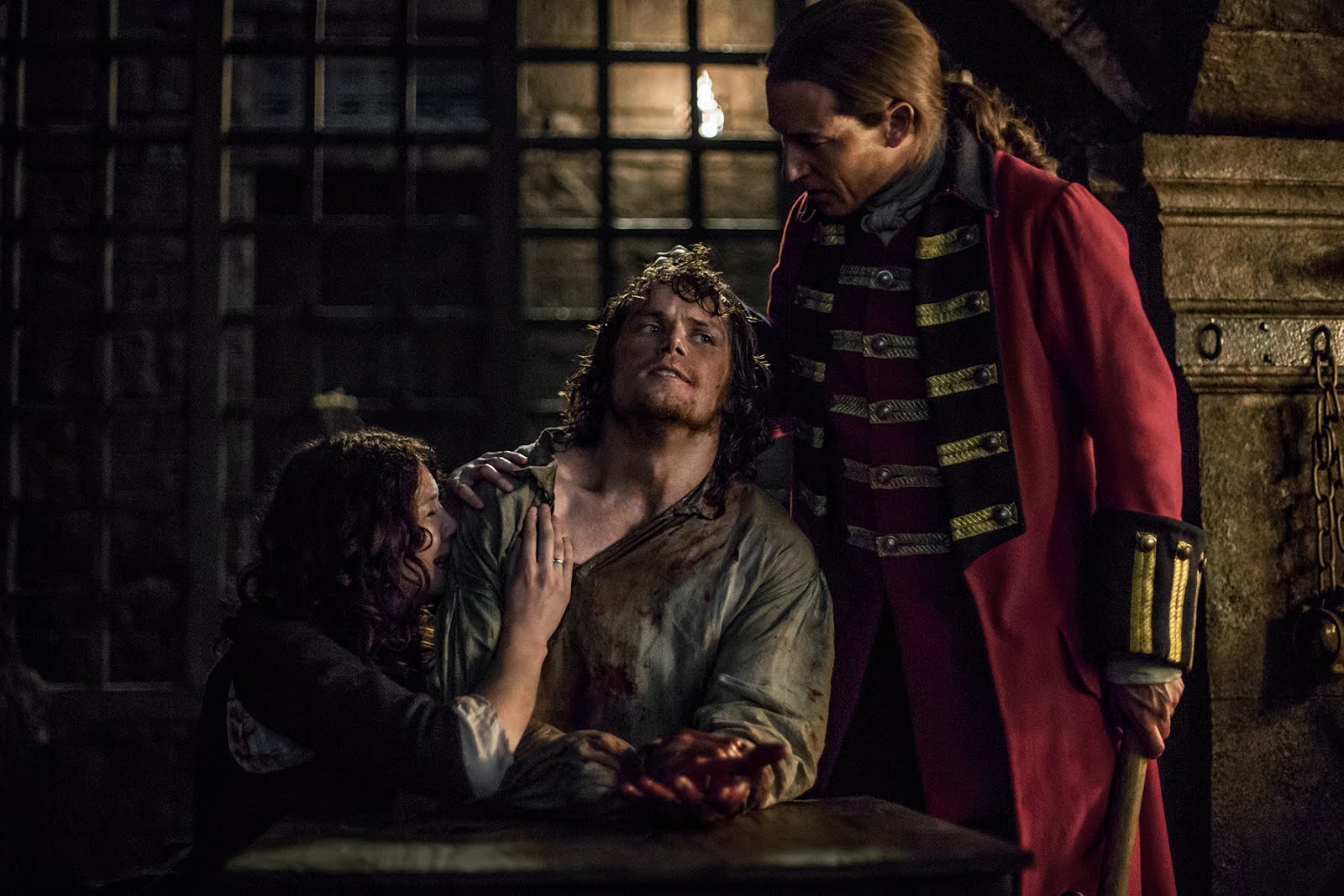 Jamie described his emotional pain to Claire like this:
“I think it’s as though everyone has a small place inside themselves, maybe a private bit that they keep to themselves.  It’s like a little fortress, where the most private part of you lives – maybe it’s your soul, maybe just that bit that makes you yourself and not anyone else… Now it’s like, like my own fortress has been blown up with gunpowder. There’s nothing left of it but ashes and a smoking rooftree, and this little naked thing that lived there once is out in the open – squeaking, and whimpering in fear, tryin’ to hide itself under a blade of grass or a bit o’leaf, but…but not…making m-much of a job of it.”

These words perfectly described what I felt in the aftermath of the abuse.  They are the words I wish I could have written to tell those who loved me what I was experiencing.

As Jamie healed from his physical wounds at the abbey, he fought an internal battle that prevented his emotional wounds from healing.  As he spiraled into darkness and contemplated ending his life, Claire stood by him, helpless to heal what she couldn’t see.  In episode 1.16, “To Ransom A Man’s Soul,” Claire, Murtagh, and one of the monks contemplate the healing of Jamie’s soul.  The unnamed brother fears that Jamie will “writhe in torment until he makes an end to himself unless he can be led back into the light.” Murtagh believes that Jamie is doomed unless someone “is willing to step into the darkness with him.” 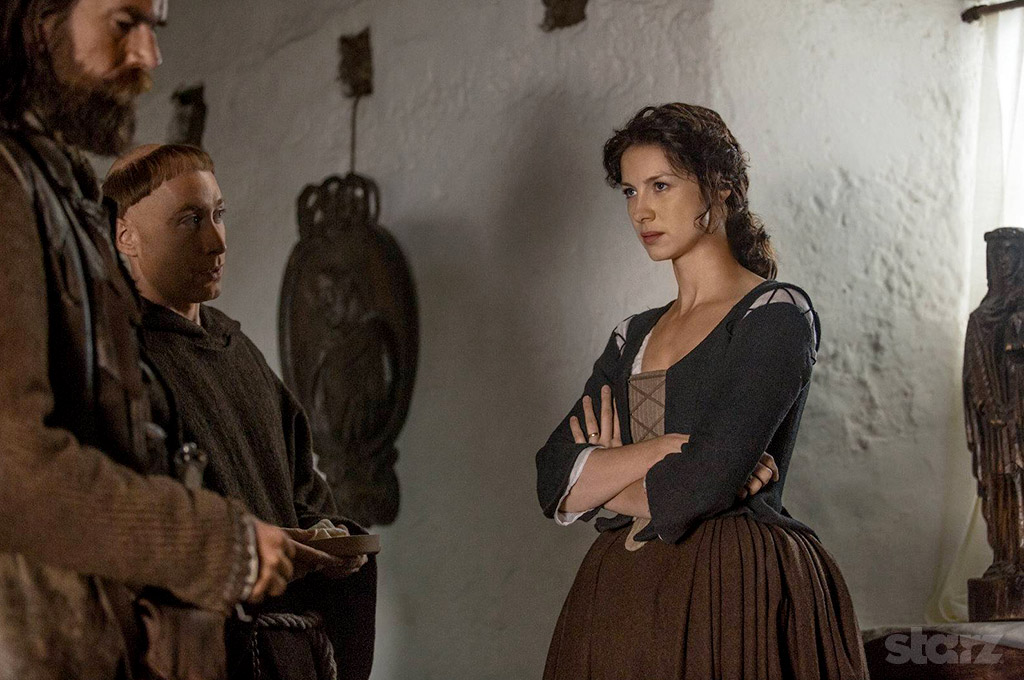 Claire stepped into the darkness with Jamie.  She relived the violence and the suffering with him until he was able to stare it down and decide that it would not conquer him.  In the book, as Jamie grew stronger in both flesh and spirit, he was able to articulate his healing to Claire by telling her that while the “fortress” no longer stood that “I’ve a lean-to built, at least.  And a roof to keep out the rain.”

These scenes were particularly meaningful to me because, as I healed from my psychological wounds, someone stepped into the darkness with me.  He listened as I recounted the events of the past.  He held my hand.  He held me when the nightmares came.  He is the only one who knows everything about my story because he is the only one who was willing and able to take the journey with me.  The story of Claire’s devotion to Jamie and Jamie’s willingness to fight for life brought all of those memories rushing back to me.  While I no longer feel the pain of that time, I will always feel an immense amount of gratitude to the one who joined me in the darkness.

I have always loved to write.  In my early thirties, I began to blog and I hoped that I might one day turn my hobby into a profession.  When my life turned to chaos, a few years before the violent relationship, I lost all of my words.  I had been unable to write anything other than business correspondence for ten years.  In reliving that turbulent period, both in the book and on the television screen, the words finally came pouring out of me. I didn’t even need to think about what to write.  I just grabbed a notebook and a pen and tried to keep up.  That was six months ago.

I truly don’t understand how or why it happened, but Outlander allowed me to breach an emotional dam that had been holding my creativity at bay for ten years.  It makes so little sense to me that I sometimes think I must have imagined either the blockage or the return of ideas, but the notebook that I have carried with me for the last six months –full of poems and anecdotes – is proof that something changed.

“To Ransom a Man’s Soul” is one of the most difficult episodes to watch.  The violence and torture are harrowing.  However, whenever I watch it (and I have watched it several times), I am somehow able to look past the evil of Black Jack Randall and focus on the resilience of Jamie and Claire and how the strength of their love brought Jamie back into the light.  I also watch this episode with a spirit of thanksgiving because it, somehow, returned a piece of me that I thought was gone forever. 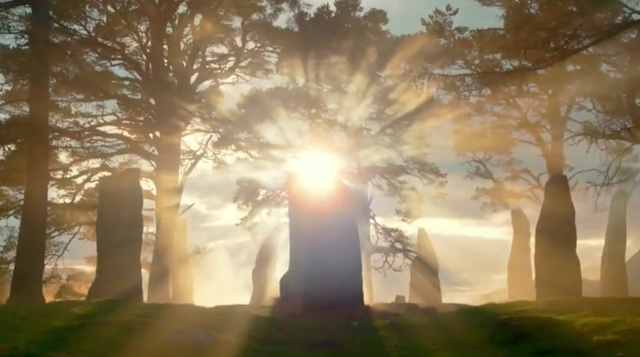 Art, in all its forms, is powerful in ways that we cannot always understand.  Have you ever experienced a breakthrough or a moment of enlightenment because of art?  What was it and how did it impact you?