We Love Davina Porter! A Talk with THE Voice of Outlander

email
If you’re going to listen to Outlander rather than read it, there is only one version to get—the one read by Davina Porter. Learn more about how she works her magic.
For many of us, life can be divided into two substantive periods: Before Outlander and After Outlander. Yes, other minor events may creep in—marriages, births, deaths, jobs—but in the course of what matters, Outlander looms large.

Before Outlander, for instance, I had never obsessed over anything—or at least not to the extent to which I obsess about this series and show I had also not been a member of anything you could even remotely suggest was a fandom since the days of the Monkees. That, um, has all changed. Just ask my family…or co-workers…or friends…or maybe even a random stranger I happen to begin chatting with while on line at Starbucks.

Before Outlander, I was also a book purist. Yes, electronic readers could be convenient for trips, but that’s it. And certainly no audiobooks! No, I want to hold the book in my hand, to feel its paper between my fingers and smell its musty odor.

That, too, changed thanks to Outlander. Having re-read the series three times (I’m leading a read-along of Voyager on our Facebook page if you’re interested), I was looking for a way to stay connected during the Longest-Droughtlander-Ever. My good friend who bullied me into watching the series (THANK YOU, SUSAN!!!) was an audiobook fan, and my sister-in-law and her partner only listen to the books because, as they said to me, the reader was THAT good.

And so, I took the leap to my first audiobook. And, like Claire’s leap through the stones, my life has never been the same. Davina Porter, the reader for all eight Outlander books so far, is beyond amazing. I decided we needed to talk. I tracked her down via the wonders of the web—she lives on Fraser Road!—and knew as soon as she picked up the phone I had found her. Here’s what she had to say about acting, recording books and, of course, our favorite subject, Outlander.

We can thank a three-line listing in Backstage, a trade magazine where auditions, casting information and other tidbits are noted, for Porter becoming the voice of Outlander. “I was skimming and right at the back I saw a listing for a native-born Scot to read Culloden,” she says. At that time, audiobooks were a fairly new concept.

She was intrigued, so she went in for the audition. “We like your voice. We think we will have future work for you, but we wanted a native-born Scotsman,” Porter says of the audition. “I thought nothing more of it.”

Three months later, she got a call and was asked if she was still interested. “What happened to the native-born Scotsman?” she asked. “’We had various tapes, they said — and all of them were incomprehensible.’”

That was in 1985 and she hasn’t looked back. While continuing to act on stage, Porter, one of the founding narrators of Recorded Books, to date has recorded well over 400 audiobooks. Besides the Outlander series, she has recorded Anna Karenina, Madame Bovary and Tess of the D’Urbervilles. She’s recorded Alexander McCall Smith’s Isabel Dalhousie series, and Phillipa Gregory’s The Virgin’s Lover and The Boleyn Inheritance.

Porter is recognized by more than her fans, too. She’s won many awards over the years. Her recording of A Breath of Snow and Ashes earned her a second Audi, the Oscar of the audiobook industry, for Best Female Narrator of the Year. In 2015, her recording of Written in My Own Heart’s Blood earned her a Voice Arts Award for Best Voiceover in Fiction. She was also included in Audiofile Magazine’s 50 Best Voices of the Last Century.

Porter is direct about what she loves about recording books. “The control,” she says simple. “I love acting. (She’s semi-retired now.) But you are at the mercy of the person onstage who if they go off, you have to be on your toes to pull them back. With the book, it’s you. You’re totally in control.”

The key to good reading, Porter says, is staying out of the way. “The main thing is you don’t want to impose your voices on the books. You are the conduit. You do your best to do the author’s intent and make it very interesting for the listening.”

As with acting, good preparation is key. First step is reading the book. “It sounds daft,” she says. “I know someone who never reads the book. You can’t do that. You will find pitfalls.” She gives an example with Thornbirds. “On page 80, he replied in a soft Irish brogue he hadn’t lost since childhood. If you haven’t been doing that voice in a soft Irish brogue, you’ve got to go back to the beginning.”

After reading, she begins to work on the voices, including the narration voice. “That must be as interesting,” she says. “You don’t want people to turn off. You have to make the narration come alive as well.”

She talks a little about her Outlander voices. With Outlander Claire, I kept as I was. I have an affinity with Claire. I feel I am Claire. It was lovely to do her. She’s such a smart woman.”

For Jamie, “you can’t sound masculine. I tried to sound less feminine. I have a Scottish mother and I’m married to a Scot. I listened to his accent. That’s ingrained. I made Jamie more Scottish but less female.”

Porter is particularly proud of the voice she created for Roger after his, um, trauma. (You’re welcome, people who have not read ahead.) “He had such a beautiful voice,” she says. “That was a challenge.” Porter likes Geillis’ voice, too. “She’s so mysterious. You knew she was bad but you didn’t know why,” she says. “I didn’t want to give away how bad she was when you first meet her. That’s tough. You must let the story progress. You must also be careful not to let that first clue slip. You don’t lean on it. You have to have that wait a minute moment.”

Some of the most fun comes from the minor characters. “You can give them daft accents, comic accents,” she says, “because you’re not going to have the listener say, ‘oh it’s that irritating person again.’”

Porter also makes a list of characters. “I look for the clues. How old are they? Do they have education? Are they children? Are they young people with no education at all? Are they shy? Are they bruised by life? Are they timid?” All this sleuthing helps her decide what type of voice to use.

She keeps history in mind too. Later in the series, a smart Quaker girl becomes a key character. (Yes, it’s Rachel for those who’ve read the whole series.) “She is more modern for her time but never out of her time,” Porter says. “I never make the mistake of saying she’s really a 21st century girl. She’s not. She’s restricted by the mores and morals of her time.”

And, of course, Porter’s choices are informed by the story itself. Many of the characters are people who have never left their village. “Five miles down the road, he’s going into a strange country. That happened at that time. What I do with my characters to convey that?” she says, noting her books have lots of notes in the margins.

“Sometimes when you record, you realize characters have developed so you make more notes,” she says. “I have many scruffy notebooks.”

Given that the book is meant to reflect 18th century Scotland, for the most part, Porter must also think about the correct pronunciation of a word. Is it HAR-assment or ha_RASS-ment? “It’s little things. Do we want the American pronunciation of a word?” And then there’s the Gallic. “We had great fun chasing down a lovely man from Outer Hebrides who lives in New Hampshire,” she says. “He would send back a tape of the words to me. I had great fun parroting that and popping it in.”

All fine and good, but it’s time to ask THE question. What is it like reading Diana Gabaldon’s amazingly well-written, no-holds-barred sex scenes? “It’s not gratuitous sex, but oh boy it was hard to read. I came to the first scene and I thought, oh mercy I have never read a sex scene. How is one doing this?” she says. “If I do it over the top, it’ll be embarrassing. I read it to myself first. Fortunately, I had a female engineer at the time. I thought, just do it. At the end, she was silent and I thought, is she thinking it’s so bad? When I came out of the recording studio, she said, ‘Would you like a cigarette?’ I said, so it was okay? She said absolutely. After that it was fine. “ 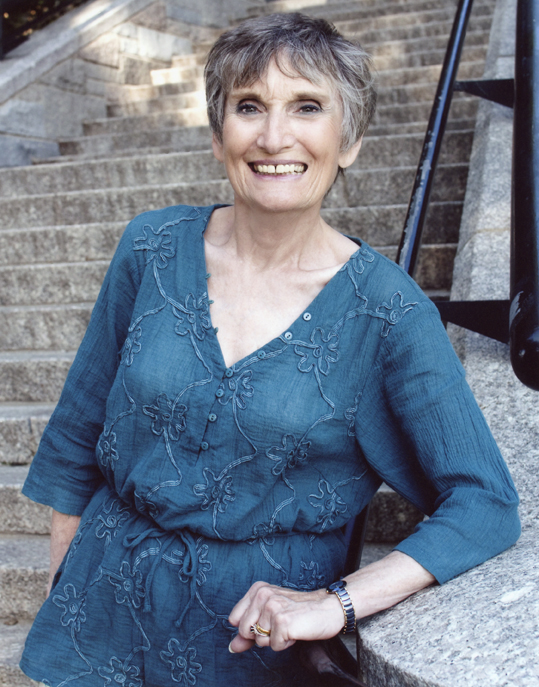 Recording is tiring work. “You must stop when you realize your voice is getting tired and all you’re thinking is just finish, just finish. You don’t want anyone listening to think well this chapter is a bit dull.”

While she can record five hours in a day, Porter does rest, stopping for drinks of water. Green apples, she says, are good to eat. “They give you fluid in your mouth and are not loud when digesting,” she says, adding tea with honey and lemon is a good staple. “It relaxes your throat.” Avoid coffee. “It makes you gurgle and dries your throat.” Clothes are important, too. “Clothes have a life of their own,” she says. “Silk whispers.”

At this point, it’s been decades since Porter first voiced Jamie and Claire. And, just as Jamie and Claire have aged, so has Porter—and her voice. “It has deepened,” she says. “It’s harder to do the young voices now, particularly children. I’m hoping it doesn’t change too badly. That’s when you have to hang up your tap shoes. I’m hoping I can continue to record.”

Porter has seen some of the Starz TV show, but for the most part is avoiding it. “I don’t want to see it. In my head, I have the characters. I have how they look, how they sound. I didn’t want to be distracted by the wonderful cast. I know how I want them to sound. I think I’m being true to Diana’s words. I want to have my own world with my own vision of these folks. Hopefully, I will be given the next book.”

Have you listened to Outlander on audiobooks or are you a book-only Outlander consumer? Have you gone on to listen to any of Diana Gabaldon’s other books as recorded books, such as the Lord John Grey series?