Outlander Extras Coordinator Arron Cuthbertson had his job cut out for him in “The Battle Joined.” Here’s our thank you.

As everyone from Ron D. Moore to Maril Davis to Caitriona Balfe and Sam Heughan have said repeatedly since Outlander began: the show owes a great deal to the people who work tirelessly behind the scenes to make it all work. We decided it was time to recognize those people who may or may not get a mention on the credits as they scroll by. This is the first in our series of dedicated articles to showcase the Outlander crew for all they do in Outlander Season Three episodes. The cast adores them; so shall the fans.

Outlander Extras Coordinator Arron Cuthbertson had a tough job in Outlander Season 3’s first episode, “The Battle Joined.” He had to find just the right group of men to portray the horror of the Battle of Culloden. Here’s our note of thanks.

I travelled to the Battle of Culloden site and museum. I set foot on the grassy moor. I gazed out from the doomed Scottish side over the flat terrain. I tried hard to imagine just how many bodies—2000-plus Jacobite, 400-plus Government forces—and how they would be strewn about, dying or dead from this savage battle.

I need not have imagined it. It’s the bodies you procured that I now have etched permanently in my brain.

Their last breath of life exhaled was my gasp inhaled.

The horror and devastation you enabled me to witness replaces anything pitiful my imagination could have conjured up. 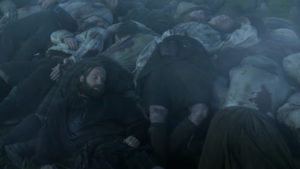 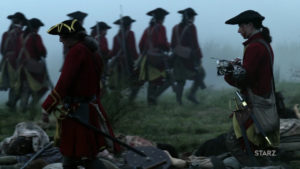 And the revulsion I felt so deep from the soldiers enacting Cumberland’s no-quarter order. I knew of his dishonour, but now I recoil automatically with disgust.

And this was just in the first 10 minutes of Season 3 Episode 1.

So thank you for utilizing the Clanranald Trust, among the hundreds of extras needed, to execute that horrific battle. Their carry-over from the Battle of Prestonpans episode to its ultimate conclusion seven months later added the requisite authenticity to the depiction of these scenes.

How smart of you to seek out their educational organization, which hopes to bring awareness of Scottish culture through recreations of the past, for its members to be just the right professionals to carry out this action. 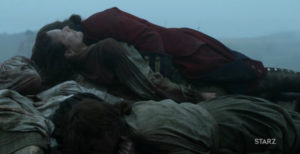 And, of course, all of this was under the watchful eye of amazing director Brendan Maher, and his stunning battlefield brilliance, as written by Ron D. Moore.

So, kudos to you, Arron for keeping the memory of the fallen alive. Truly this battle you assisted in portraying, with its devastating consequences for Scotland, will not be forgotten around the globe.

With love and admiration from an Outlander fan,
Holly