Through all the fantastical adventures of Outlander, the pride of the series comes from not only its wonderful characters, but also how richly steeped it is in the events of the past. From the era of the Jacobites to the American Revolution, the books and the show are the perfect blend of fiction and history. Readers may not be able to go through any nearby standing stones to immerse themselves in the 18th century like Claire Fraser, but some have found their own way to step into history, just like Outlander Cast Clan member Todd Salazar. 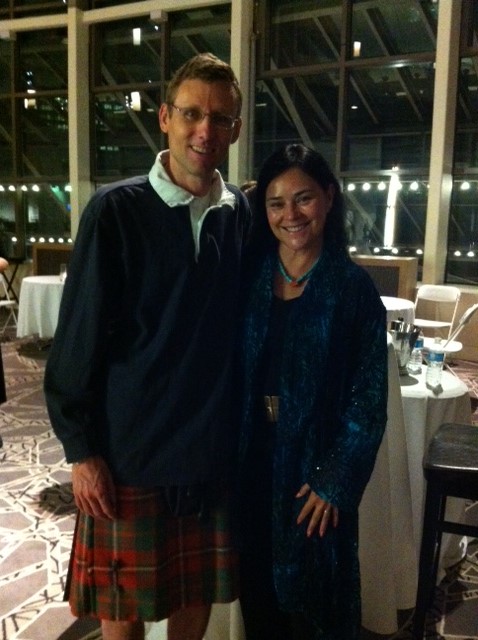 Salazar, who currently resides in Colorado, can trace his family lineage all the way back to the Jacobites. According to his research, his grandmother’s family once belonged to Clan Hay, who, despite the elimination of the clan system, survived the era of the Jacobite Rebellions to emigrate from Scotland to Canada in the 1850s. His family has been researching their history for over 20 years now, but it was Outlander that sparked his interest in his Scottish ancestry. Salazar says the books and the series have helped him “gain some further understanding of what my ancestors had gone through to get me where I am today.” His love for history has also led him to gather an impressive collection of Scottish weaponry, including a basket-hilted broadsword that dates back to 1725. 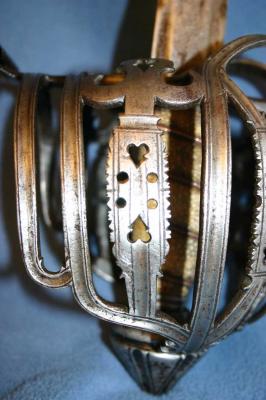 Salazar’s 1725 basket-hilted broadsword, once belonging to the Allan family of Scotland

Here’s a little bit more about Todd and the role he plays in Outlander history!

Tell us a little about yourself: I had been working on researching my family history in Scotland when I first discovered the Outlander series on television. I also own an authentic 18th century Scottish basket-hilted sword that I love to show to anyone who is interested.

Favorite Outlander Villain: Any of the British redcoat soldiers

Are you a book reader and/or show watcher?: Both

What was your first experience with Outlander?: I was a show watcher at first, but then I started to read the books when I found the time to do so. I really wish I could dedicate more time to doing both. I work and have two kids, a teenage daughter and a 10-year-old boy, that keep me very, very busy! I knew of the book series after I had begun my family research.  Hence, my enthusiasm for it has grown ever since. I’ve always related to the characters of Seasons 1 and 2 because my ancestors survived all of the Jacobite rebellions while living in Scotland.

In what way has Outlander inspired you, both personally and creatively? The show has inspired me to attempt to connect with my Scottish ancestors from the 18th through to the mid-19th centuries. I believe that the Outlander series has helped myself and everyone to become better connected with their Scottish and non-Scottish roots of the 18th and 19th centuries.  I appreciate the attention to detail of everything including dress, weapons and props that were used in every part of the Outlander series. It will be fun to continue to see and follow the story of Claire, Jamie and family in their struggle for survival. 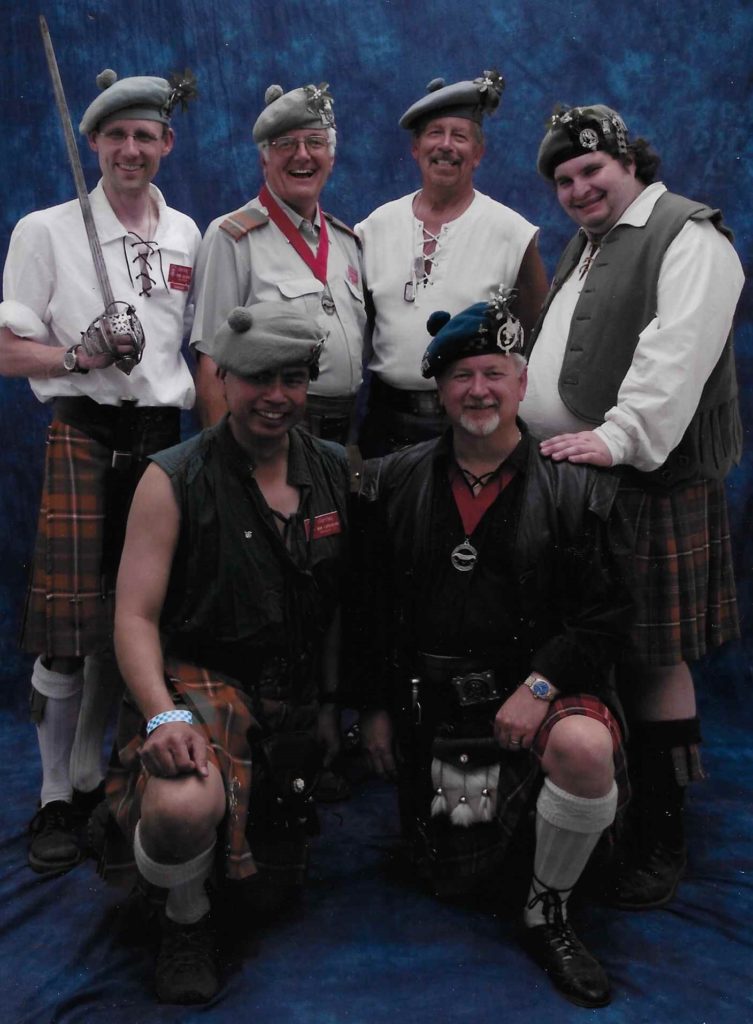 Salazar (top left) with other members of Clan Hay

How do you share your love for Outlander?: I often attend Scottish festivals here in the United States, where I like to demonstrate how the Scottish basket-hilted sword was used along with the targe and dirk during the highland charge. About five years ago, I met a representative from STARZ Entertainment, which is headquartered here in Colorado, at one of the Colorado Scottish Festivals. I spoke with her for a while and showed her my Scottish basket-hilted broadsword. I have done a number of demonstrations for everyone at a a few Scottish festivals in Colorado. I believe that it is important to for everyone to understand what a true authentic 18th century Scottish baskethilt looks like. It’s funny the number of people that have wanted to see, touch and handle it. I have had a number of 80- to 90-year-old women pick up and handle the basket without hesitation. Perhaps some of this interest has come about from the Outlander series.

Any special/fun Outlander moments you want to share?: I met Diana Gabaldon at a book signing in Colorado in April 2015. I presented my sword to her and she appreciated seeing it. I purposely waited at the end of the line so that I could spend some time with her explaining everything about it to her. I thought this would be the best thing to do so that I wouldn’t cause delay in her signing everyone else’s book. While I was waiting, I did hold quick informal history lessons to anyone that saw my baskethilt and wanted to know more about it.

Lastly, what are you looking forward to in upcoming books/seasons/events?: The Frasers’ involvement in the American Revolution because, after working on my own ancestry, I decided to dig some into my wife’s family as well. From that research, I found that my wife had an ancestor named Patrick Murvin, who was a native of Loudoun County, Virginia, that enlisted in and fought with the Virginia Militia during the revolution. Family legend states that Patrick’s father, Thomas Murvin, was a childhood friend of then-young George Washington. I wish I could go back and speak to Thomas Murvin and hear about some of his childhood stories about young George Washington. Supposedly, Patrick served in several battles, including the Battle of Cowpens and the Battle of the Hook, that led up to the Battle of Yorktown. Again, it is really amazing to think about what Patrick and all of our ancestors must have endured to bring us all here to this point-in-time.