Outlander Behind-the-Scenes: A Day at the Beach Outlander style

Beach days are supposed to be fun days, right? Soaking up the sun, splashing about in warm water, not a monstrous villain in sight. But ….. this is Outlander. And Executive Producer Matt Roberts did issue a fair warning ahead of time on Instagram! 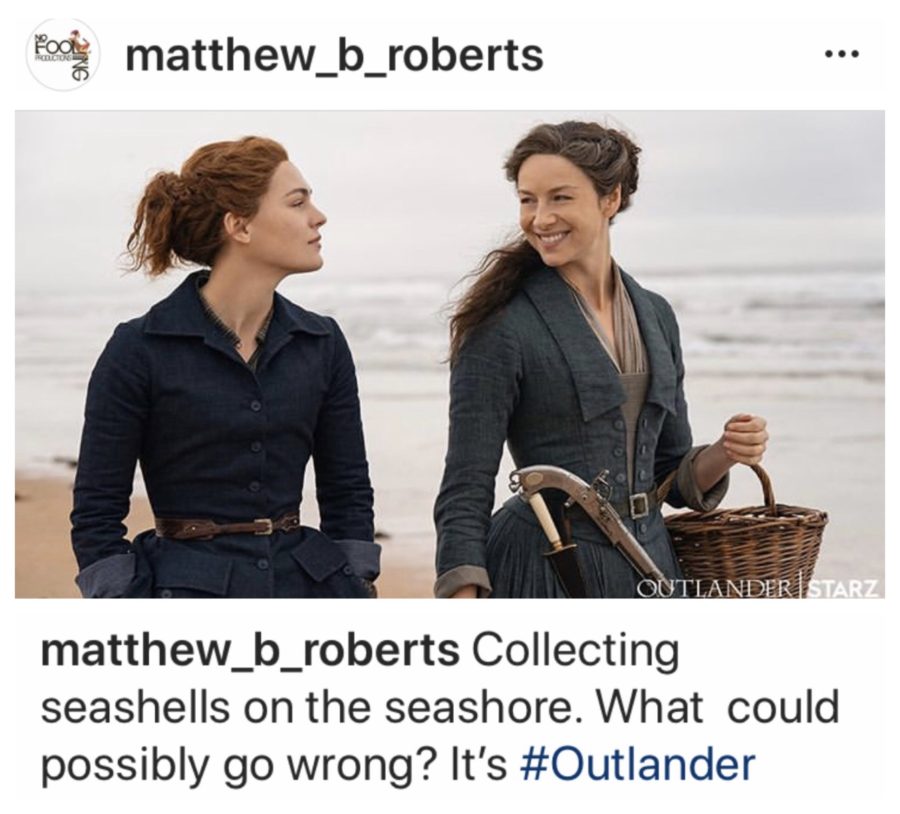 In true Outlander style, what started out in Outlander Episode 510 as a fun mother-and-daughter shell-gathering, whale-watching and beach-racing day turned into a nightmare. 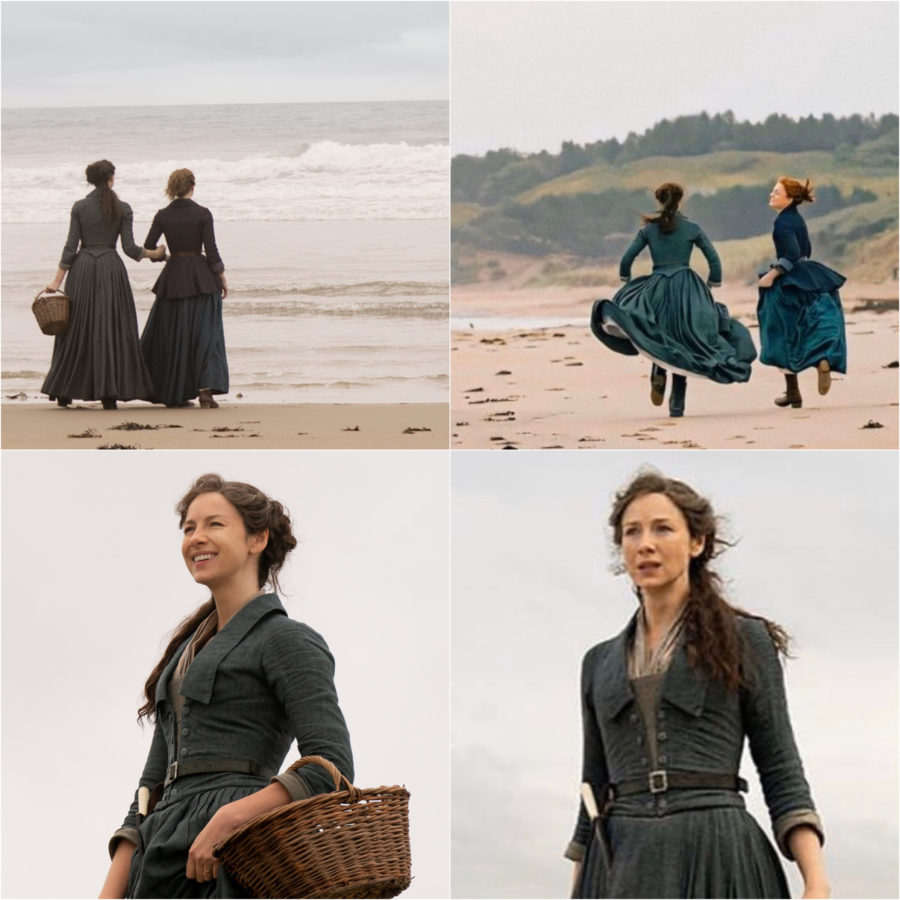 The gals were having a whale of a time until …..

Check out this great Richard Rankin portrait of Ed Speleers on location dressed in his finery as Bonnet tries to become a gentleman. What the? We will miss Speelers’ great talent though, and apparently he is a fun guy (unlike his alter ego) according to fans who’ve met him at conventions. 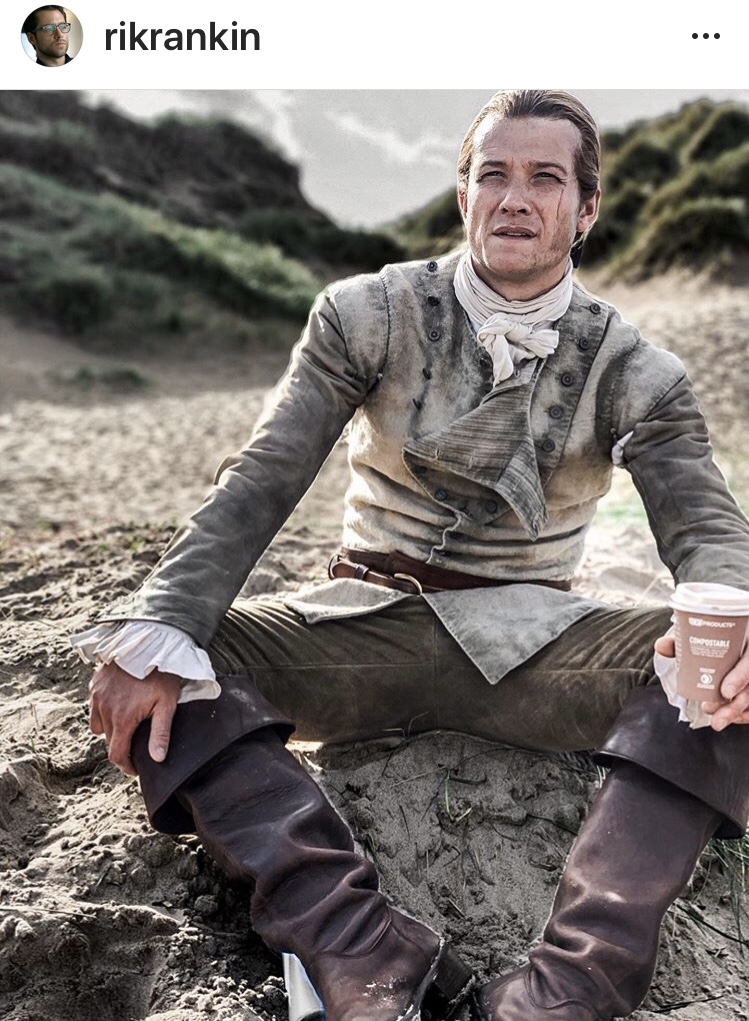 Not only was it nightmare on our screens, but some of the behind-the-scenes action shows that the cast and crew had a lot to contend with during those shoots. 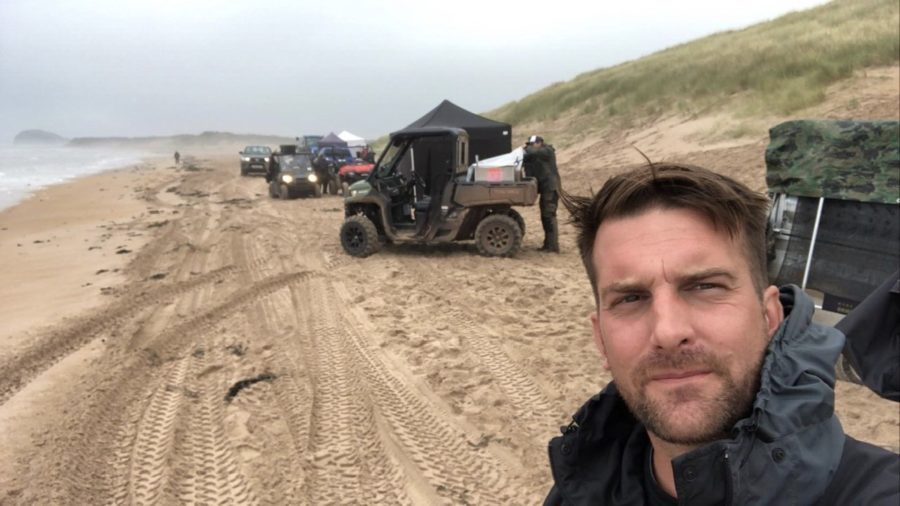 Steadicam operator Michael Carstensen gives us a selfie view behind the action on a cold and gloomy day.

Back in September/October 2019 these scenes were shot on beaches not too far from Edinburgh in Scotland, in the North Berwick area. Local fans heard some buzz on social media and trekked down there to maybe catch a glimpse of the action, but it turned out to be a disappointing expedition. The track to the beach was blocked and when Sam Heughan was seen driving away from the action towards the end of the day, it was time to call it quits.

Eagle-eyed fans who keep a track on Outlander filming locations will notice the close proximity to East Linton, home of the Preston Mill where Jamie got his shirt caught (ahem!) in Season 1. Also, on the map you’ll see the real Prestonpans and Tranent which you’ll remember from the battles in Season 2. And Musselburgh, is home to Newhailes House, which was where Jamie and Claire first met Governor Tryon in Season 4.

The location for the shoots was at Seacliff Beach and Tyninghame Beach in North Berwick, just in case you fancy a trip up that way. Alas, we are mostly armchair travelers these days in our COVID_19 lockdowns, but we can dream of days when we can get out and about like we used to. Aaah, the good old days when you could wander freely on beaches with whoever you wanted ….. wait, sometimes that was not so good! 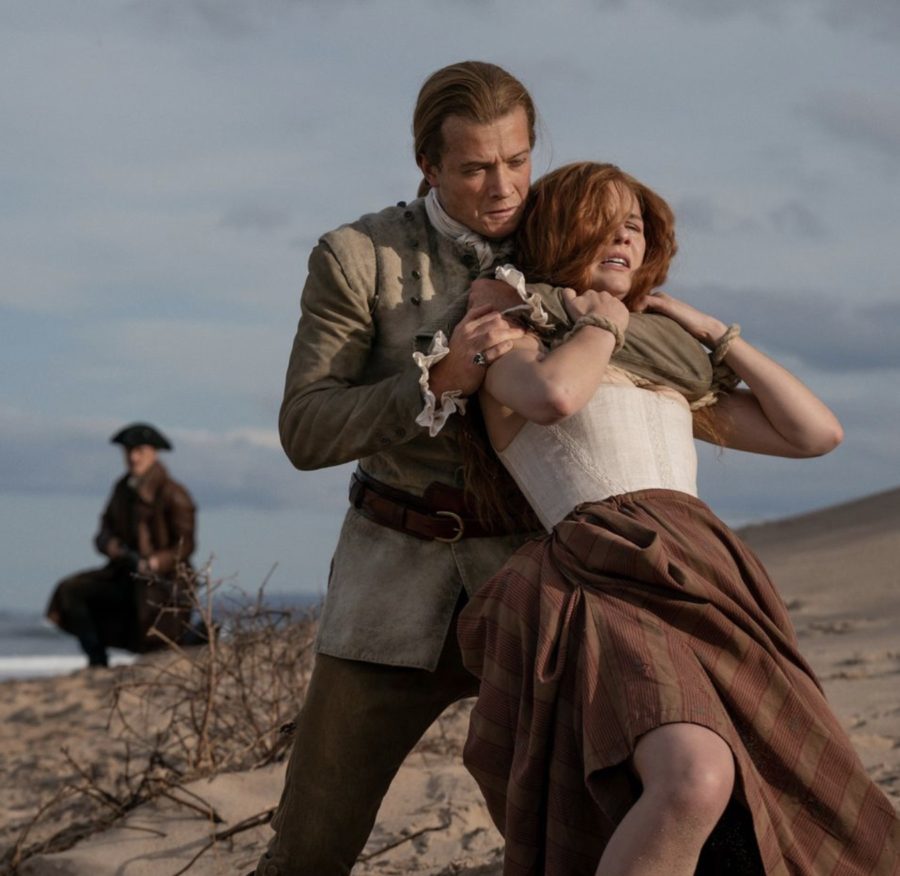 Luckily, the cast and crew gave us some little glimpses behind the scenes at the time and lots more pics are coming out since the episode aired this week. It’s fun to see the spirit of camaraderie amongst cast and crew and to see them still laughing and having fun even though the conditions look pretty gruelling.

The crew showed us pics of some of the grim weather conditions they experienced. Cold, and rainy. 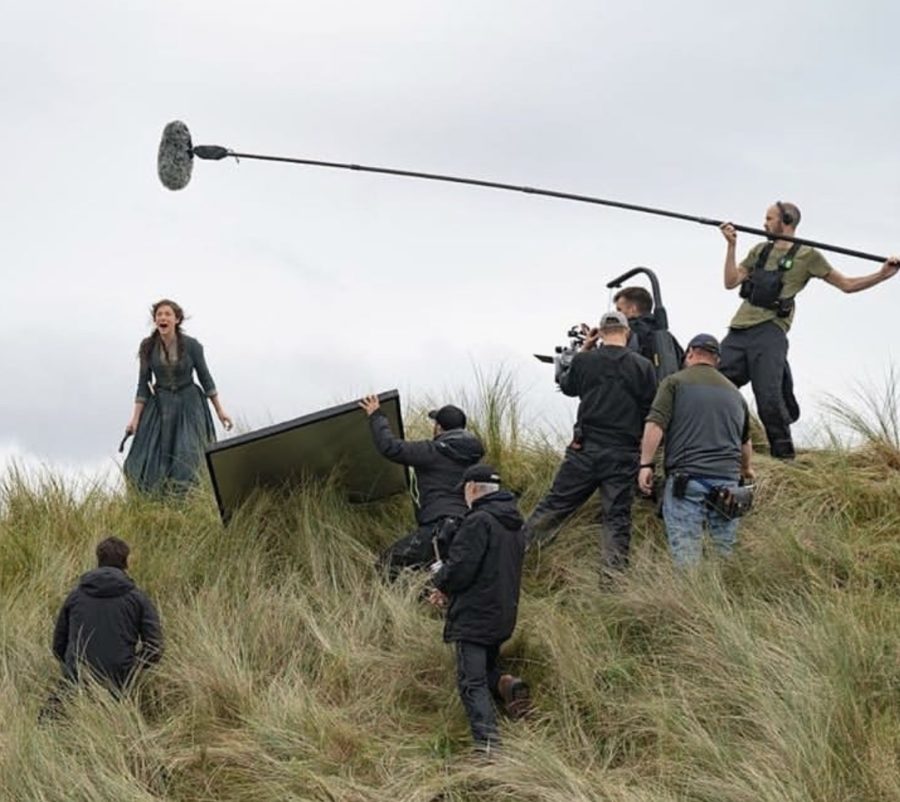 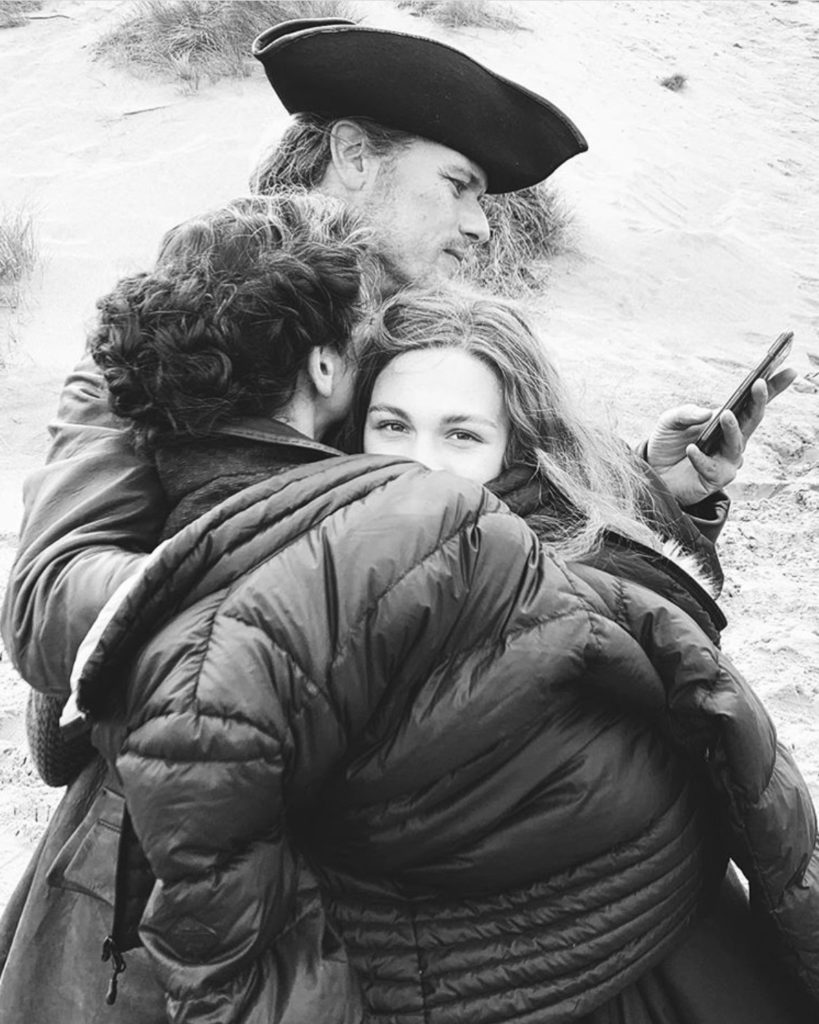 Remember the good old days when family members could snuggle up together to keep warm? The three costars Sam Heughan, Caitriona Balfe and Sophie Skelton show us how it used to be done. 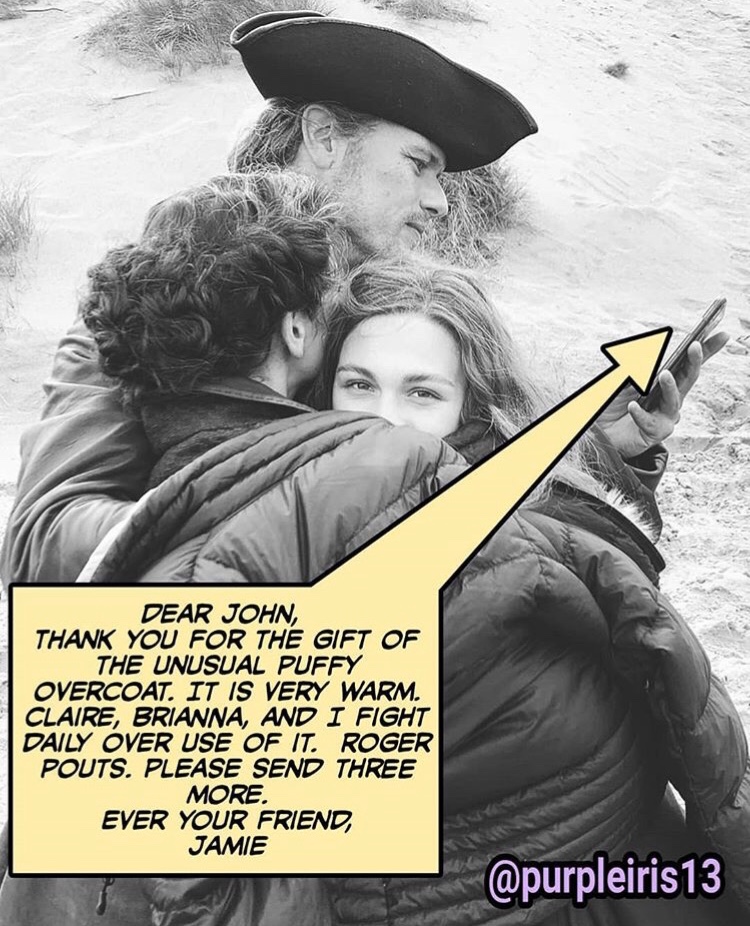 Karen Jeanne on twitter saw the funny side of that picture! 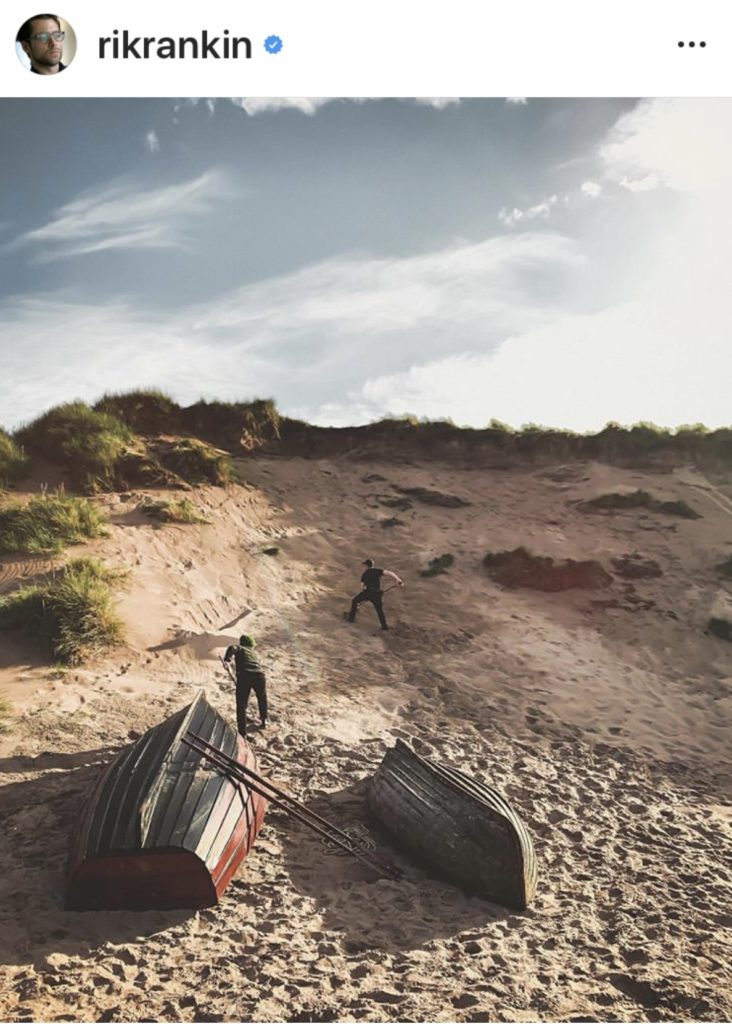 Looks like some of the days were nice and sunny. Richard Rankin shows us the hardworking crew, preparing for the next take. And on Twitter, Caitriona Balfe said, “She’s not heavy, she’s my tele-daughter.” Good humour and stamina seem to be the hallmarks of the Outlander cast and crew. 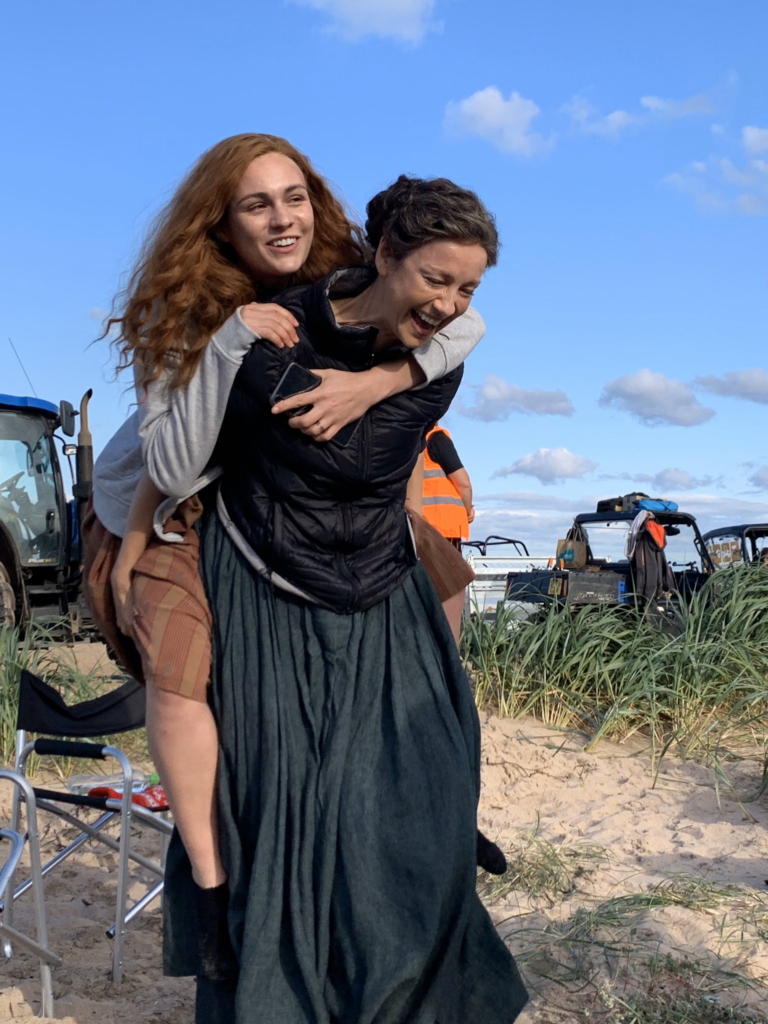 For those who missed their Fersali fix in this week, here’s a reminder of some happier beach days in warmer climes, back in Outlander Season 3 when they were shooting in South Africa. 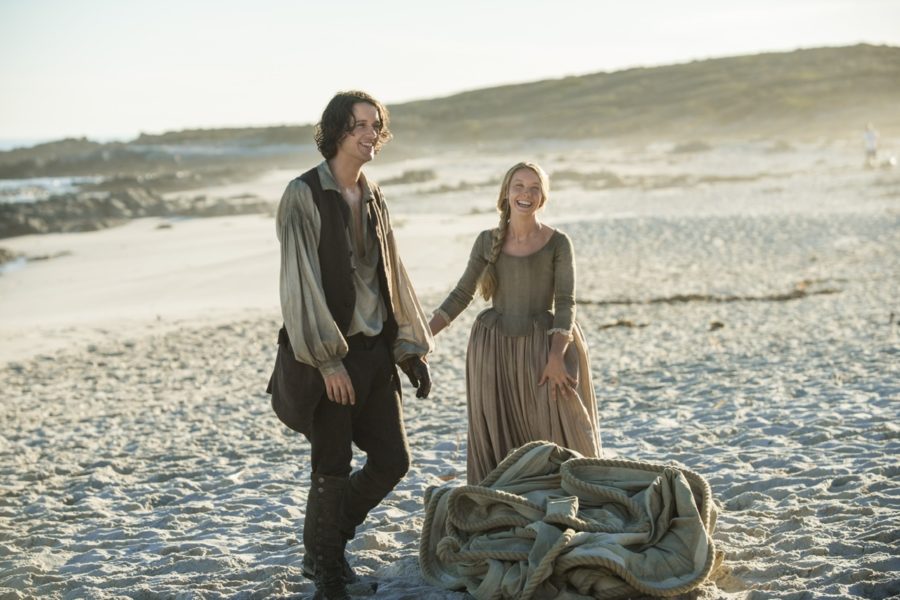 Speaking of Marsali, my book-reader self was looking forward to the gun-totin’ scene where she takes aim at Bonnet …. misfire! Then Bree’s well-aimed pot shot straight for the nether regions. Talk about getting his comeuppance! 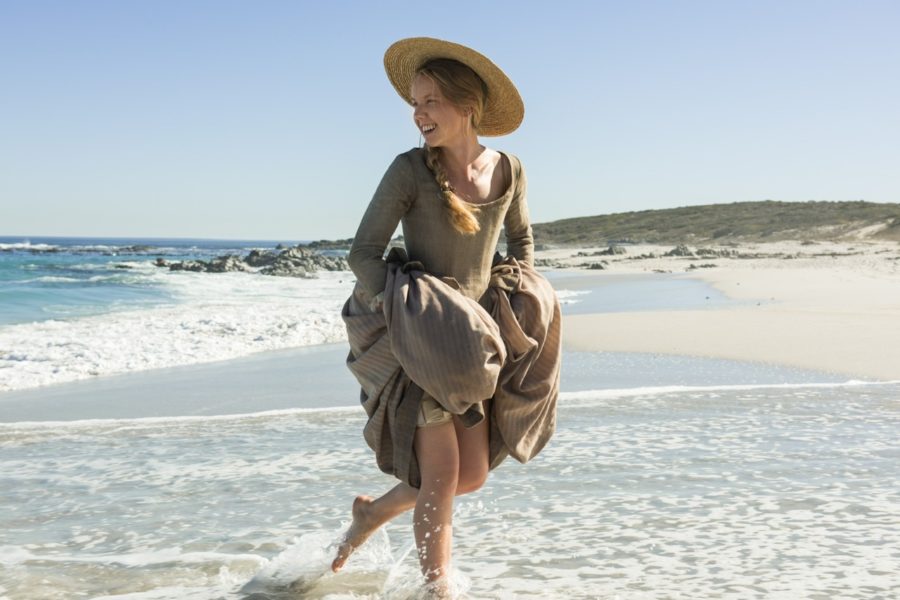 Who can believe there are only two episodes left! Seems like we are going to face a very, very long Droughtlander this time. Who knows when they will be able to start filming Outlander Season 6 due to the COVID_19 virus. Like everything else, it will be a waiting game. Meanwhile, stay safe and well everyone.