“The Ballad of Roger Mac”: Loss in Outlander and in Life

“The Ballad of Roger Mac” is about more than the loss of Murtagh in Outlander. It’s about loss of life as we know it in the here and now. Karen Rutledge shares her thoughts.

As usual, for one fleeting hour Outlander provided a welcome escape into the glorious world of Jamie and Claire. “The Ballad of Roger Mac” was even more welcome as it shifted my focus to something other than my little corner of our extraordinarily off-kilter world. What I hadn’t anticipated, even with all the hints dropped by Sam Heughan and others, was that I would be swept away as never before.

This episode replaced “Of Lost Things” as my favorite and had me sobbing through the glorious highs, the gut-wrenching lows, and every good moment in between. Sam described it perfectly to elle.com, with these words: “It’s very raw.”

As the tears continued to ebb and flow hours after that final heart-breaking scene, I pondered what made Episode 507 unique. Like Jamie, I took stock to discover what made it more breathtaking than previous episodes dealing with heart-wrenching loss, jewels like “Of Lost Things” and “Faith.” Slowly it dawned on me: It perfectly reflected what’s happening to all of us around the globe. Like Murtagh and the Regulators, we are waging war against an enemy that is heartlessly taking lives and in an insidious Tryon-like “there is what is done” method. 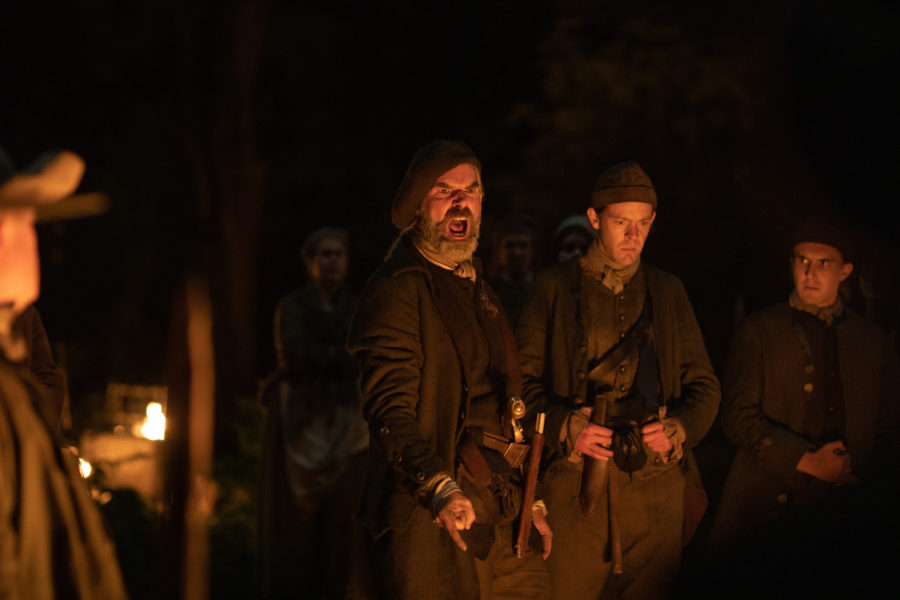 Like Claire, we have been transported to an unfamiliar landscape, unprepared for battle and its aftermath. We are struggling to cope with the disruption and destruction COVID-19 is wreaking worldwide, forced to think on our feet as we dodge and weave our way through scientific breakthroughs in a chilling social distance existence. 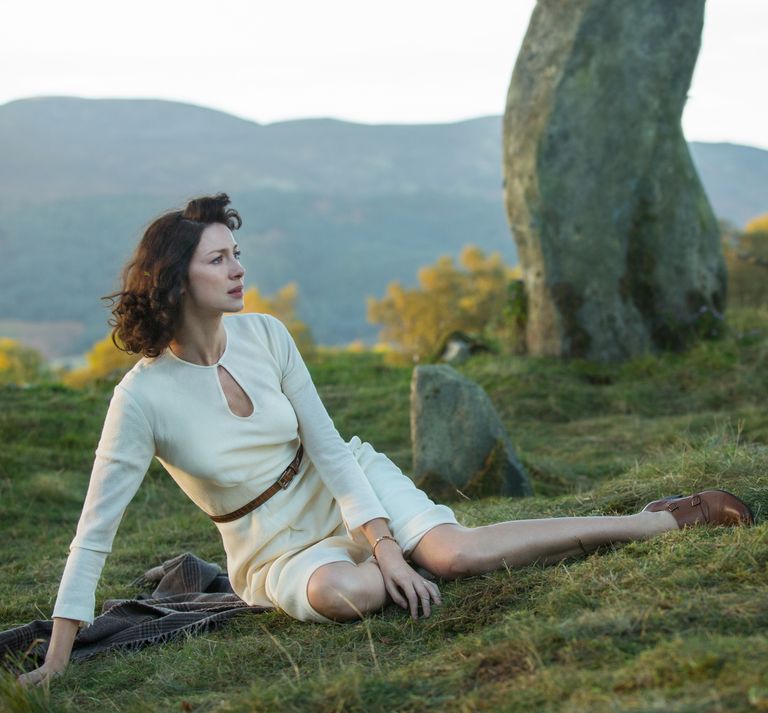 The sorrow I felt at the loss of Outlander fictional characters Roger Mac, Murtagh and his fellow Regulators had broken the emotional dam cemented deep down inside and allowed me to do something I’ve desperately needed to do for weeks … grieve in real life. I wept for the loss of normalcy we may never regain. I mourned for those who are gone, for those who this invisible enemy will undoubtedly continue to strike down and for all those left behind who now have to somehow soldier on in a world they likely never could have imagined.

I wondered how it could be that author Diana Gabaldon and those involved in the Outlander TV series reached through the screen to touch our hearts and provide an avenue for our collective grief? The timing was pure serendipity, no way it could have been planned, yet there it was — the cathartic magic of Outlander. 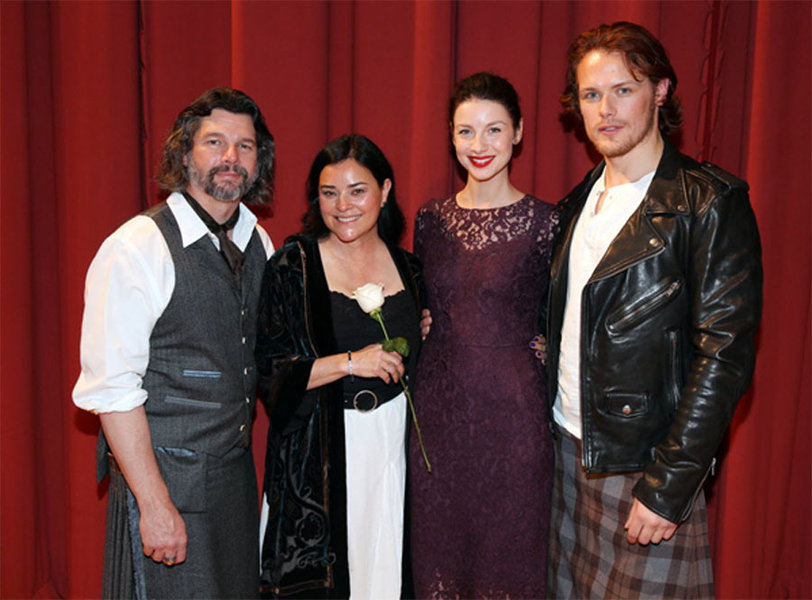 After taking a few days to process all those thoughts and feelings, I felt it was time for a rewatch. Yes, the tears flowed again, but I was able to fully appreciate that Outlander magic the second time around. First, the scenes that tore my guts out…

Even if you’re a longtime book reader who deplored the extended Murtagh storyline, I’m guessing you still teared up at that gunshot, right? How could you not?? That Jamie-Murtagh death dance reminiscent of Jamie and Black Jack’s final moments at Culloden and Jamie trying to stop the obvious 18th century life-ending blood flow were brilliant.

Duncan Lacroix was at the absolute top of his game delivering those iconic “I’d never betray your mother” and “It doesna hurt to die” lines. As I wrote before, Murtagh’s reappearance in the forge and his softly murmured “Thank the Lord” revived my lagging love of the show and ended what had become my Doubtlander. For me, keeping Murtagh alive was a great adaptation and a little part of my heart died with Duncan’s amazing portrayal of the light leaving his eyes. Murtagh, we loved you well. Duncan, we love you still. 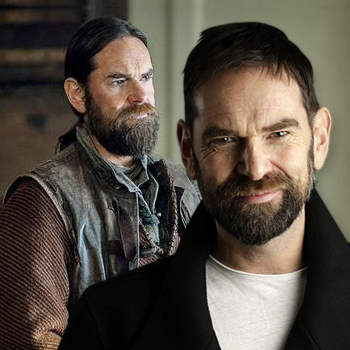 And I would again bet that Every. Single. Viewer. sobbed along with Jamie in his rapid-fire progress through the stages of grief — denial, anger, bargaining, depression — and his “*mentally stomping* on your coat, Tryon, as I toss it on the ground” moment before his quietly falling to pieces acceptance kneeling by the fire. (And was Tim Downie channeling Black Jack more than just a bit there?? I think so!) Should Sam Heughan not receive appropriate nominations, I predict worldwide Obsessenach protests will break the Internet. 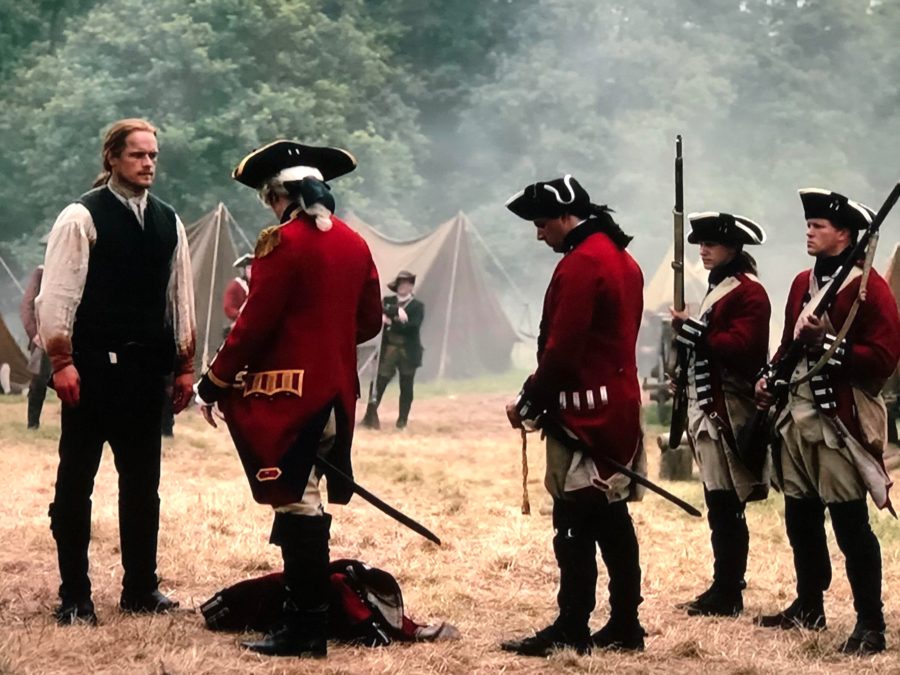 Caitriona Balfe got us, too, with Claire’s reactions and touching good-bye to Murtagh. Her grief at her inability to help Murtagh was exceeded only by the depth of her understanding of the pain in Jamie’s grief. As she pulled up that sheet, I pulled the last precious Kleenex out of the new box I had grabbed as I sat down to watch. 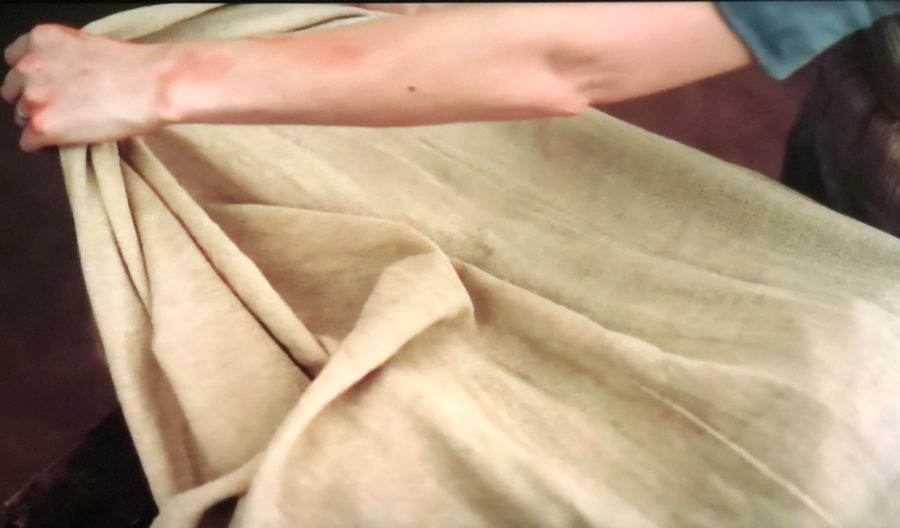 But, they weren’t done with us yet, nuh uh. Could it really be Roger hanging from that tree? I. Can’t. Even!

Roger Mac, you can’t be gone, too!?! I can only hope that your hand under that hood is a good omen for episode 508, “Famous Last Words.”

Waiting two weeks to find out has been tough. Sunday can’t get here soon enough!

All the Good in Between

It was a tightly-written episode. A short story that stood on its on, it was packed with great dialogue, callbacks to earlier episodes and packed with so many delicious details… 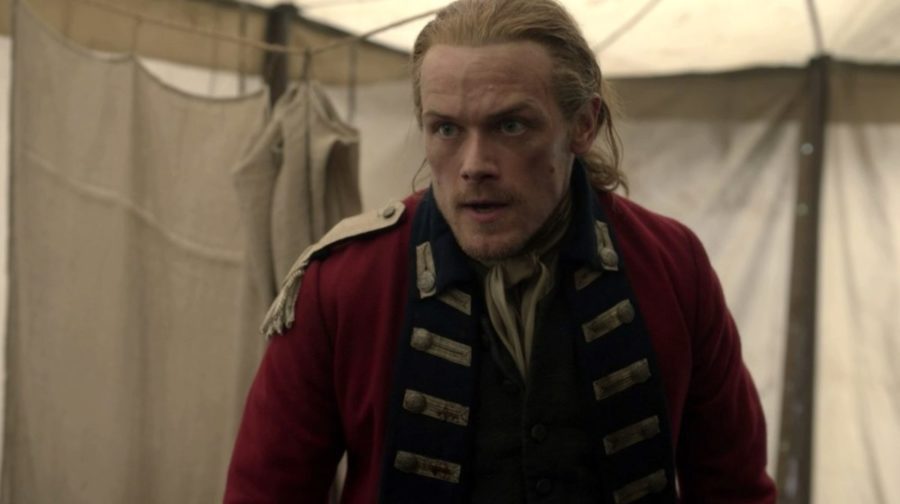 IMHO Outlander Episode 507 gave us the most magical moments we’ve seen this season, heck, maybe in the series as a whole. As I said, it was super tight and action packed. The only thing loose was something verra verra good — Jamie’s hair. I could go on and on about it but I won’t. Maybe you’ll agree, though, that it looked almost as good as Season 1?

The intimacy, that affectionate banter and those inside jokes, between Bree & Roger and Claire & Jamie was pure Outlander gold. It’s those intimate moments that make this series for me. 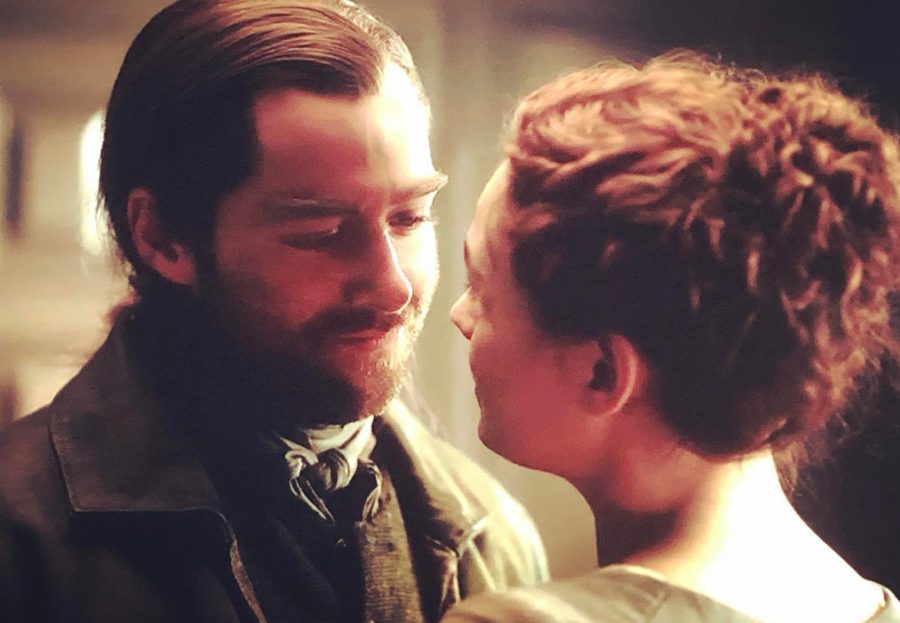 Then there’s unicorn Jamie in the creek, again with the good hair. Book readers, this one could only have been better if they had stuck more closely to the book, amirite? Diana wrote it as Claire coming upon an unclothed (in the US South, we’d say ‘nekkid’) Jamie with his kilt waiting on the bank. Could our hearts have stood that level of authenticity? Mebbe. I wouldn’t mind testing it the future. How about you? 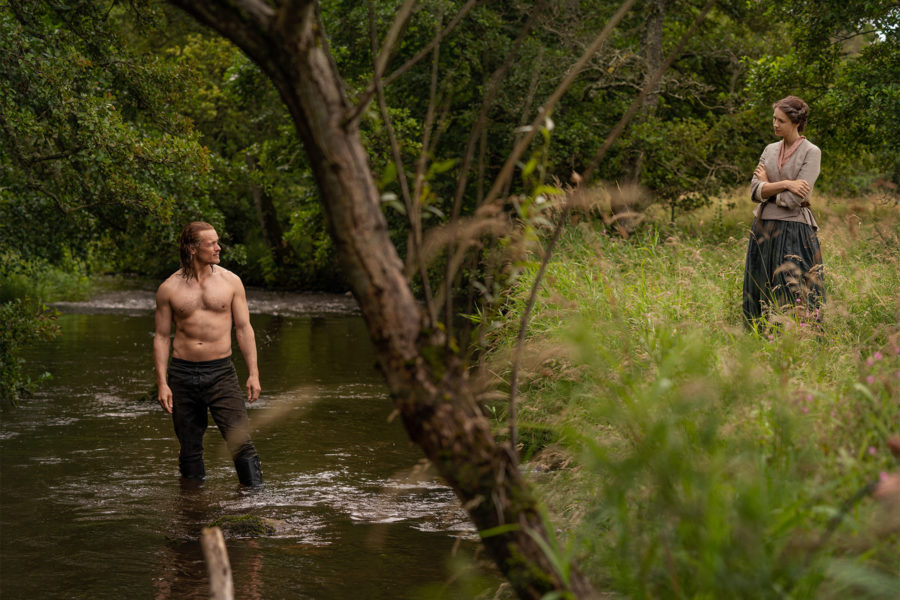 And, finally, Jamie putting on that red coat, a symbol that stood for everything he abhorred, and having to fight opposite his countrymen. That was intense. While not in the book, I’m glad Sam Heughan fought for it.

Keep Calm and Soldier On

With over a week since my first viewing and a few rewatches in between, I realize I haven’t focused on the costumes, the sets, the music. It was truly *everything* and more.

Now that I’ve had a few good cries, I’m feeling back to my usual hopeful and optimistic view of our humanity. As Diana Gabaldon reminds us through Jamie, “The world and each day in it is a gift.” And, as was added by the writers, “I’m grateful to see it.”

We will continue to take stock, celebrate our successes, mourn our losses and to persevere.

It’s easy to understand why this episode was Sam Heughan’s favorite.
Where does it fall on your Outlander Season 5 list, so far?