Reading Between the Lines

But mostly, six hundred and fifty-six long days without our favorite characters to make us smile, laugh, cry and love. A long, dry droughtlander that is finally over.

I don’t know about you, but droughtlanders are tough. What do you do when you can’t watch the drama we’ve come to know and love unfold on our screens? At first, I took to watching and re-watching the entire series. I must have watched it in its entirety completely through 8 times, not counting specific episodes that have come to be my personal favorites (The Wedding, A. Malcom, Uncharted – just to name a few). I even watched other projects that Sam and Cait did separately from Outlander (by the way, Belfast, is amazing and you all should go see it). 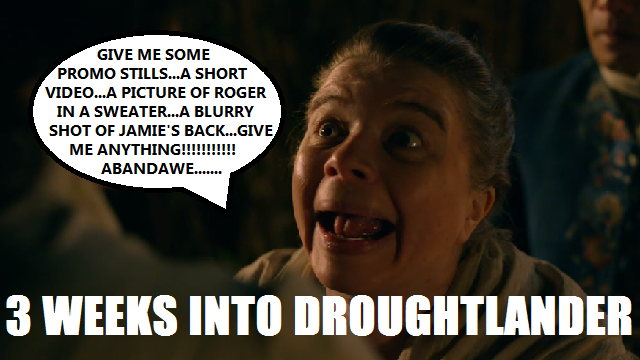 I also took to the books. Mind you, I will not read further than the current season, so I’ve only read through A Breath of Snow and Ashes. I am very interested to see where the show takes us this season and how it will compare to Diana’s version. Once the season is over, An Echo in the Bone will be first up on my summer reading list.

Diving in: The power of transformative work

But what kept the magic of Jamie and Claire’s love alive for me during those 656 days was, and still is, fanfiction (yes, I’m a huge nerd). It has become a wonderful escape for me. No, I am not the one writing it, though I’d love to give it a try one day. I have been reading wonderfully magical and creative stories that fans of Outlander around the world have written. I know when my favorite stories are updated each week and get sad if a weekly update is for some reason missed.

Though Diana has made her stance on fanfiction very clear (in short, she hates it with a fiery passion), our editor in chief, Kendra, believes that “art inspiring more art should never be discouraged.” This is something I wholeheartedly believe, myself. I think it’s a huge compliment that creative minds all over the globe want to take partial ownership of their favorite characters and put them in new and vastly different scenarios. The Organization for Transformative Works (OTW) is a non-profit that was established by fans to serve fans by protecting and legitimizing any fanworks that are created. (I could take time to get more into the legality of it all, but that would just be a drag).

Besides, that would take up valuable fanfic reading time and I just know you’re dying to find that ubiquitous coffee shop AU that literally exists in every fandom. Searching the tag will net you three of them. Happy hunting! 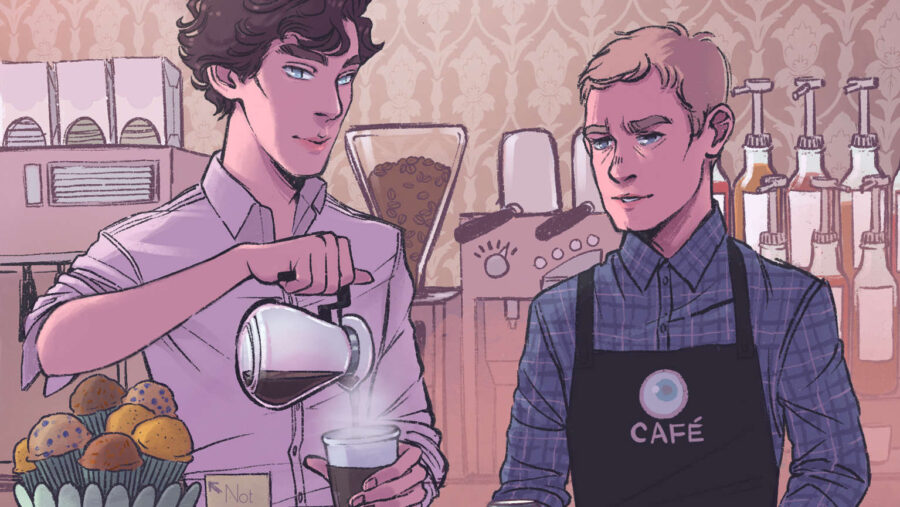 Where do I read all these amazing fanfiction stories? A little website called Archive of Our Own. Actually, it’s not quite so little. It’s huge considering you can read fanfiction about pretty much anything from movies and television to video games and books – even real-life celebrities (though the ethical conundrum of using the actual actors as props in your story tip-toes into taboo territory). I only read the Outlander stories, though. They aren’t all about Jamie and Claire. Some are about Roger and Bree, others about Lord John Grey. You can even filter your search to include specific characters, ratings, categories, and warnings. I don’t filter, though, because I like to read them all. 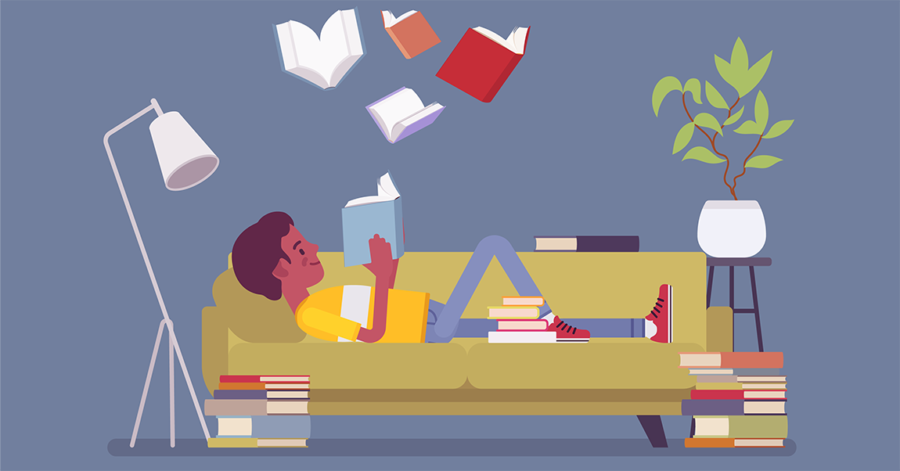 Where should you begin?

Below are fanfiction stories that I have fallen in love with over the past 656 days. They are all creatively different from each other and from Diana’s original storyline. The authors evoke emotion and offer an escape into new creative worlds where we see our favorite characters love hard and often.

1. Practice by AussieOutlander: Jamie is a war veteran with PTSD. His therapist recommends he do yoga to help his mind heal. When Claire is one of his yoga instructors, he suddenly finds the will to get better.

2. Beautiful Disaster by Jade2o1o: Claire and Jamie have a one-night stand that results in pregnancy. She runs into him a year later at a wedding with a baby on her hip. Questions arise and romance ensues.

3. Unexpected Valentine’s by OL_Obsessed_20: Claire finds Frank cheating on her and calls it quits. She escapes to a friend’s flat where a certain handsome Scot is also staying. How will they spend the holiday?

4. Like Petals Falling by JRC10: Claire Randall is a librarian and discovers she has a secret admirer. Turns out he’s a handsome Scot named James Fraser.

5. What’s Rare is Wonderful by the9theearl: An untold story of what-if Faith survived and Claire is pregnant with twins when Jamie sends them back to the future.

1. Make it Work by treasurethelittlethings
2. After All This Time by sbstevenson2
3. Learning by Francescameron
4. Welcome Home, Soldier by Sassenach_13
5. Highland Cottage by Peachy217
6. To Build A Home by anotherplaceintime (marvelleous)
7. This Is Me Trying by CourageousJS
8. Imaginary by CrossingInStyle
9. Power Jam by isthisclever
10. Renewal by ssomethingvague

Thank goodness we won’t have to experience another droughtlander for at least another seven weeks. And, at some point this year, we will get Men In Kilts season two. Sooner, rather than later, hopefully. If you’re anything like me and want to quench your thirst for more Outlander, and aren’t afraid of a little deviation from the original story, I encourage you to take a peek into the vast world of fanfiction. You may come to love these stories as much as I do, maybe even be inspired to write your own.

• Fandom: People who enjoy a specific story, character, game, etc. and actively interact with other individuals who share interest in the same media.
• Canon: Refers to the “official” source material upon which fanfiction can be based.
• Alternate Universe (AU): Refers to a story set in a different universe from the canon or when the author makes major changes to the canonical storyline or premise.
• Alternate Timeline (AT): Refers to a fanfic that takes place in another time than the canon.
• Oneshot: A fanfic that consists of only one chapter and/or is first published in its completed form instead of multiple chapters over time.
• Crossover: Characters from two or more stories/worlds interact.
• A/N: Author’s note for when the author wants to explain something. Traditionally placed at the beginning or end of a chapter.
• OC: Original character; refers to a character created by the author, as opposed to one already existing in canon.

(Credit: The Lallybroch Library on Tumblr)

What are your thoughts about fan fiction in the Outlander universe or in general? Are you a fanfic reader or writer? Let us know your favorites in the comments below.