Birthing In Outlander: The Not So Accurate Debut of Margaret Ellen Murray

Email
Written by: Sara Mordzynski
In honor of Labor Day Weekend…let’s talk about labor, of a different kind.
In reviewing Episode  113, The Watch, it is interesting to note that two distinct, almost separate arcs develop and essentially do not intersect at all.  On the one hand, there is the dynamics of Jamie’s relationship with other men, primarily, Ian Murray, Tarrin MacQuarrie and the deserter, Horrocks; on the other, is the interplay of Claire’s increasingly warm bond with Jenny which is forged in the domestic world of home, hearth and impending motherhood. It will continue to evolve in the subsequent episode, The Search. This article will focus exclusively on the TV version’s portrayal of labor and birth.  In no way is it meant to disparage the expert consultants who were utilized by the production team.  They provide the data; the showrunner, writer and director have the prerogative to alter that information to make it suitable for their narrative.
What does that mean? Outlander is not the manual of what happens in childbirth—as a TV adaptation of a historical fiction/romance/adventure (and all those other categories it may fall into), it may alter facts to fit its narrative goals.  With that in mind, I will simply separate the drama from what actually happens.
As a physician, I will admit TV’s portrayals of  labor and delivery are often so outrageously and inaccurately overplayed, most times I switch channels because it is irritating for me to watch. Hysterics, chaos and high pitched squeals make the portrayals border on the ridiculous.
This was was not the case here in Outlander. The visuals were stunningly beautiful. Jenny’s description of what it feels like to carry a child was hypnotic, enchanting:  “In the early days, it’s just a bit like wind in your belly. Later, you start to feel the child move and it’s like a fish on a line, just a quick tug….and towards the end, when the child moves alot, it’s a feeling like when yer man’s inside ye…”.  It is even more, dare I say, almost erotic in the book.
For those of you who have experienced childbirth, Jenny’s restlessness and movements brought back memories. The drama is not overplayed. While Claire’s examination reveals that the baby is in breech position, as caregiver, although she exudes reassurance, internally she may  not  be feeling completely confident.  Even a subtle humor is seen, as  any of you, who  assisted a parturient, must have laughed when Jenny cries out and blames Claire for her pain ( had Ian been in the room- could you imagine a run of  Gaelic curses including a vow that she will never sleep with him again, EVER!)  Through out those scenes, the connection grows ever stronger between the women.
However some of the choices made did not work for me and as I elaborate on them I will give some obstetrical  insights without turning this into an article for submission to a medical journal. In the US, the incidence of breech presentation at term is 3%. Most  babies deliver head first but here, the arse places itself in the lower uterine segment (ok I had to use “arse”, since this is Outlander). 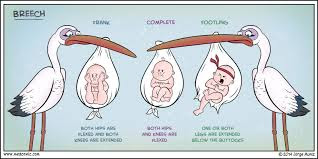 Certain situations may increase the risk for breech presentation for example: twin gestation, structural anomalies of the pelvis or uterus, prematurity, and too much or too little amniotic fluid surrounding the fetus (for those who want the technical term: poly or oligohydraminos).  Underlying Jenny’s impending joy is the distinct possibility of death. Not only because of her awareness of what happened to her own mother but because of the risk entailed by a breech delivery.
Living now in the 18th Century, Claire is acutely aware of the limits placed on her ability to intervene if circumstances turn dire.  Infection—no antibiotics. Hemorrhage—surgical intervention or transfusion is impossible. The huge ominous fear looming over the breech birth is head entrapment. If the aftercoming  head can not be delivered smoothly and expediently, asphyxia can lead to major neurologic damage or  fetal demise. Today, the American College of Obstetrics&Gynecology states that cesarean section is the recommended mode of  delivery for breech presentation.   I will not go into all the studies and controversies regarding that recommendation but safe to say, there are emerging opinions that advocate vaginal delivery may be appropriate under selective conditions.
So back in the 18th Century, Claire is not  only presented with the “usual” risks of birth, now there is the added factor of a breech.  Claire attempts to “turn the baby”. Here is where things did not work for me. External Cephalic Version, the actual term for what Claire is attempting to do, is a valid and recommended procedure to convert a breech to a cephalic (head) presentation. However, the conditions in which the TV adaptation presented it,  may have heightened the dramatic effects for the narrative but it was completely inaccurate and doomed to fail in  reality.
First, Jenny’s water already broke, without adequate fluid within the uterus, successful version is virtually nil and even dangerous.  Second, one needs a relaxed, non-contracting uterus to perform this procedure and being in labor, as you can imagine, the uterus is far from relaxed. To perform this maneuver requires technique but it makes you sweat  ALOT—there is quite a bit of exertional effort required.  In addition,  Jenny looked way too comfortable, while undergoing this  to even make this look believable, let alone have a wee chat with Claire.  Even in this day and age, with spinal/epidural anesthesia available, most women would not sit through this and have a casual conversation with us. FYI, success rates under optimal conditions vary but it’s roughly 50%.
In the end, Margaret Ellen Murray made her debut safely, and despite  Jenny’s prediction “it’s a boy, alright”.
Did you think the the TV adaptation successfully conveyed Claire and Jenny’s blossoming
relationship? What did you think of it’s portrayal of the birth process?