Rent : Why It Shouldn’t Be A Forgotten Episode

Everyone has their favorite episode. Most will say “The Wedding” or “The Devils Mark” or “To Ransom A Man’s Soul”. Don’t get me wrong, though, these episodes are all amazing. Each are specatacular for different reasons. Whether it be acting, cinematography, costumes or directing, they are all on point. Some of the best I have ever seen on television. And you see alot of discussions about these episodes, too. But not “Rent”. I’ve noticed that. Or maybe I just haven’t been paying attention close enough. And it’s kind of a shame, I think. Quite a few things, I think, go unnoticed in this episode. 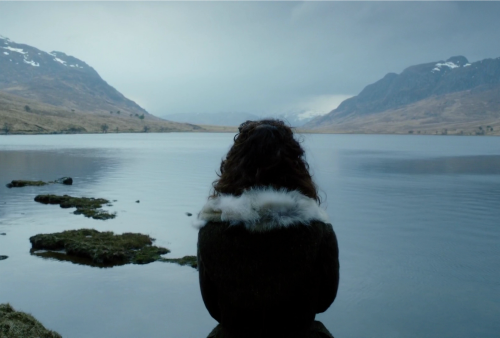 You can’t get a better view than that. If you didn’t want to go to Scotland, this should do the trick. Everytime I see it, I get goosebumps.
It opens up to an absolutely breathtaking shot of the Scottish Highlands. That’s one of the things I love most about this episode. It made Scotland a character in the story. Yes, they’ve been in Scotland since the beginning of the story, but you haven’t really SEEN the country until this episode. 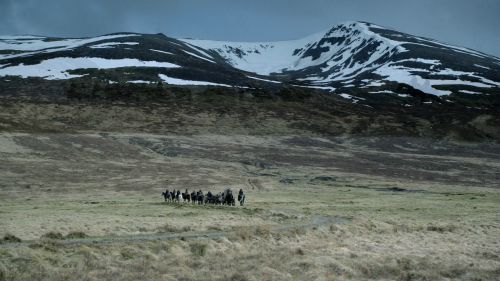 You’re finally given a chance to explore and see the different parts of The Highlands alongside with Claire. It showed you a variety of nature. Mountains, flowers, trees, creeks, and lakes. You see different kinds of trees and terrain. It makes you feel as if you are in Scotland. 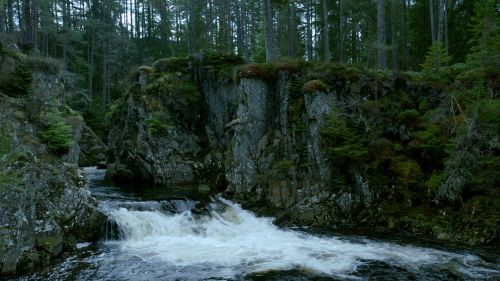 Denis Crossan , who did the cinematography for “Rent” and “The Garrison Comander” , did a superb job.
This particular episode really exposed the Gaelic language and Highland culture as well, in my opinion. The Wool Waulking song scene was one part of that. Curious about the process, I looked up what went into it. 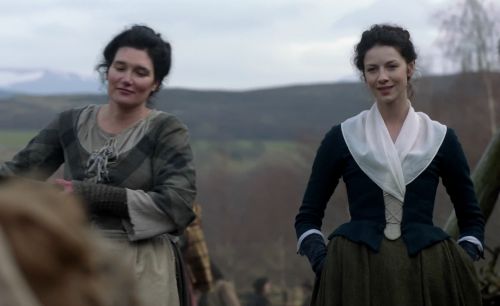 The process of waulking was called a luadh (loo-ugh) in Gaelic and the songs are a orain luaidh (or-ine  loo-ie). It was a day long process. The fabric would be shrunk, cleansed, folded, pounded and stomped on. When that was finished, they would sow the tweed together and , yes , it would be soaked in urine. 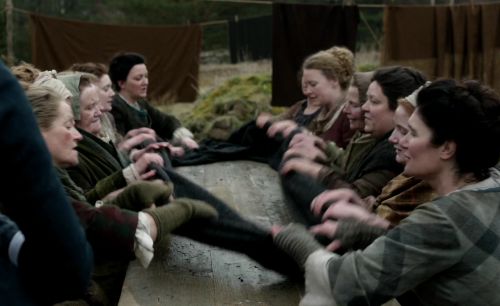 It would help deepen the color and set the dye and it helped remove the oils from melted livers of dogfish. It was mainly women who would do this. It was their time to be away from the men ( some places they where either banned from the event,or just allowed to sit and watch), to talk and gossip. They would prepare the best of food and make an event out of it. Plus, this is nice moment from Claire. She’s finally getting to have some time with other women after being with men on the road for who knows how long. She’s relaxed and having a little fun.
There is sooooooooooooooooooooooooooo much more too it than what I summarized ( and I summarized a lot). So you can go here x or here x and read up more of that part of the Highland culture.
By the way, the Waulking song will be on the Outlander Vol.2  soundtrack!!
“Rent” kind of sets you up on the political spectrum of what occurs in Scotland within the next 2 years ( twords the end of Dragonfly in Amber). At first , it looks as if Dougal is just raising money for his own profit and using Jamie’s scars on his back to get it. 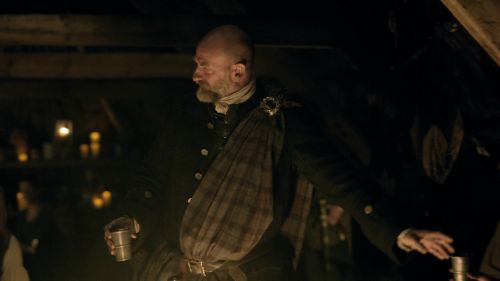 But we soon learn, as well as Claire, that the purpose of Dougal’s speeches and him using Jamie, are to raise money for a Jacobite army to help Charles Stewart. For those who don’t already know, Charles Stewart or “The Young Prentender” or “Bonnie Prince Charlie” had raised a Jacobite Army in the Scottish Highlands in the hopes of reclaiming the throne.
“And from the little I remembered of Bonnie Prince Charlie, the Young Pretender to the throne, part of his support had come from France, but part of the finances behind his unsuccessful rising had come from the shallow, threadbare pockets of the people he proposed to rule. So Colum, Dougal, or both, were Jacobites ; supporters of the Young Pretender against the lawful occupant of the throne of England, George II” – Outlander pg. 153 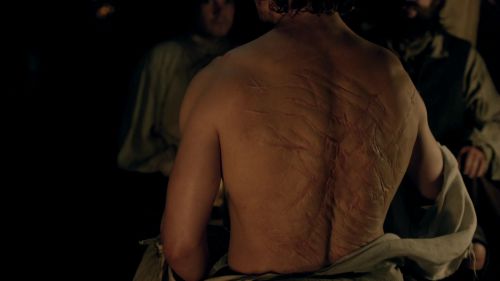 It was fruitless, as Claire had tried to warn Ned about. Now, despite winning battles, such as The Battle of Prestonpans, it all ended in one of the most famous battles of Scottish History : the Battle of Culloden on April 16th, 1746. After the battle, men who had fought for the Jacobite cause were arrested and thrown in prison. Some where hanged, some men served there sentence out in the British Colonies for life. Clan chiefs where stripped of there estates. The wearing of tartan became banned. 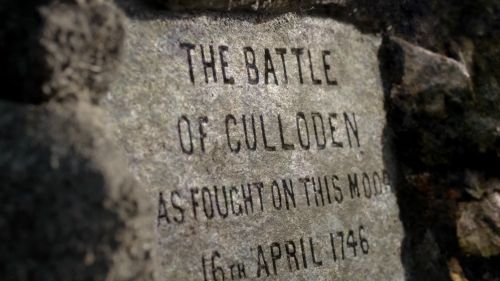 Mary and Blake actually did a podcast about The Jacobite Rebellion. If you love history, I highly recommend it!!
Speaking of Dougal, this was actually where Graham McTavish did his best work, in my opinion. Graham did a splendid job of keeping you on your toes. If you hadn’t read the book, you weren’t really sure of what his motives where. With every look or glance, he kept you second guessing whether or not he was a good guy or a bad guy. Made you think “Can I trust him?”. He killed it in those speeches!! Even though it is in Gaelic, you could see and hear the passion that he had for the Jacobite cause. You could hear his hatred for the English in his voice.
“Coming gradually back to an awareness of my surroundings, I realized that he was skillfully rousing his audience to a high pitch of excitement about something” -Outlander pg. 152.
The way Graham delivered it was one of those moments where you see the actor become the character. You weren’t watching Graham McTavish , the actor. You where watching Dougal Mackenzie, war chief of Clan Mackenzie. Give the man an award!!
That’s not to say that everyone else went unnoticed. Caitriona, Sam, and Duncan always do a fantastic job. Grant and Stephen really got the chance to show more of Angus and Rupert’s personalities. We got to meet Ned Gowan played by Bill Patterson and Willie played by Finn den Hertog.
SO maybe it’s the nature.
Maybe it’s the culture.
Maybe it’s the history.
Maybe it’s the acting.
Maybe it’s something I have forgotten to mention as to why I think this episode is so special. But I hope I was able to shine at least a little light on this episode.
So, what are your views on “Rent”? What is your favorite episode? What made it special to you?