It’s easy to mix up Sam Heughan with Jamie Fraser.


I see it all the time. Fans take a pic of “my Jamie”, I mean Sam, I mean Sam as Sam, not Jamie.  Or tag a pic of Jamie, when it’s actually Sam, not Jamie, and not Sam being Jamie.  It’s a muddle of confusion, but that’s the point.
Afterall, Graham McTavish did exclaim to an Outlander fan audience, that “He is Jamie.”
All of which means he’s perfect! Right?
No. Sam will screw up. He’s human, not perfect.

Celebrity is a condition (symptom) of being famous.

Fan: You’ll never believe it!
Superfan: What is it?
Fan: I actually found a picture of Sam Heughan on the subway!
Superfan: Seriously?!
Fan: Do you want to see it?
Superfan: OMG YASS!  I Love Sam Heughan. He is the perfect Jamie! I voted for him in the RadioTimes poll! I tweet him daily. I’ve watched the wedding episode thirty-nine plus one hundred times!
Fan: Yeah, Superfan,  you gotta see it!
Superfan: Of course.
Fan: Or do you?
____________
Where do you draw the line on sharing?
On his rights versus yours…

A baby pic, his personal address, a pic of him on a date (with gasp! Not Cait! Gasp!), meeting with friends for dinner or a director for an upcoming blockbuster, leaving his mum’s house?

What is yours and what is his?

On balance, I’d rather remove my own spleen with a butter knife than be famous.

So that every indiscretion, every mistake, every personal tragedy and even private joys and sorrows become subject to public scrutiny.

Those who embrace and crave fame must be either extraordinarily naive, unbelievably driven or psychologically unbalanced.”

I used the above quote as a voice-over in a penned screenplay, much like Claire’s voice-over in the first scene of Sassenach. I did extensive research on fame for this two years ago (before Sam and Outlander TV) , so that I could write about a young Scottish actor struggling with the perils of fame in Hollywood, when intrusive paparazzi and fans cause rising star Tristan, 25, to lose both the love of his life and his passion for acting.  In my original ending, it didn’t bode well.

Lottery winners experience a similar fate as those who rise to sudden stardom. The surprising thread between the two: be careful what you wish for.
The use of social media has taken instantaneous interaction between actor and fandom to a whole new level.
Sam uses social media to attempt to satiate fans.  But is it feeding our desire, or are we insatiable for information from him and about him?
Before this article, I would say that I knew a fair bit about Sam Heughan’s acting life, but verra little about his personal life.  And a cursory search since uncovered little detail.  He’s held most of his cards private. And so far, the fans have been exemplary in keeping it that way.
But even us fans can be swayed.  Look at the recent subway picture, clearly taken without his permission. 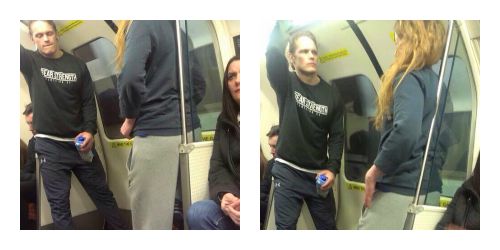 Or the kerfuffle over production pics. It’s the third time production pics have been posted profusely, due to public filming locations. And if many fans have no qualms about posting production pics of season two before it airs, even after a plea from the costume designer Terry Dresbach herself, why wouldn’t you rush to post a baby pic of Sam, or a pic of him locked in a parking lot kiss, if you took one or found one?

Given the views of the subway pics, I see more than a few of us fans have no qualms.
Have we even stopped to think about what is public versus what is private when it comes to our favourite actors?

TMZ won’t stop, neither will the Daily Mail. THEY are not your friend or mine. THEY are definitely not his friend.  You ask for it, THEY will find it. THEY are a machine built entirely on a boat made of profit.  There is no morality filter in this world they create, save for your own.
As we go forward fellow Sam Heughan fans, we should make a special effort to separate Sam from Jamie.  To love Sam for playing Jamie so perfectly. But leave Sam, the person, alone.  He has a right to privacy.  And if you can’t do it for him, then do it for yourself.
He’s an amazing actor because he has the peace of mind to be one.  Make him paranoid, become intrusive, and all that may change.
Yes, he is a grown man, who can protect his own ass (literally) but he will be powerless versus a driven paparazzi.  There are few, if any, lines THEY will not cross.
Let’s abide by our own moral code- don’t post photos of him at private moments or look at paparazzi photos. By doing so, we give him the space to do what we require the most: act, beautifully, exceptionally, in the role of Jamie.

Contrary to one fan’s comment, he SHOULD be able to ride the subway, enjoy a full life, and not have to live in a priest’s hole- we all know what that experience did to Jamie.

An ounce of prevention is worth a pound of cure.
And be realistic – most of us know of Sam Heughan as the actor who portrays our beloved Jamie. I would not presume to invade his privacy in a misguided attempt to think I could ever really know the person.
Even the ones who have felt him up the back side : )
*Not an actual picture of Sam Heughan.