“I come to you as kinsman and as ally.  But I give you no vow.  For my oath is pledged to the name I bear.”

Here are Jamie’s words as he explains to his uncle and Chief of Clan MacKenzie, his refusal to swear an oath of allegiance.  But who were the Frasers?  What are the origins of this clan with its very ungaelic surname. It was not essential for the narrative of the TV adaptation to explore this, but  I thought it would be interesting to delve into the history of our beloved hero’s clan (at least up to the time frame of Outlander), because, well  I am a sucker for history and a sucker for anything even remotely connected to Jamie.
One of the more plausible origins of the name may be linked  to the French provinces of Anjou and Normandy, presumably  to a knight by the name ‘de Fresel’ who arrived on the British Isles during the Norman conquest (circa 1066). As a derivative of the French word for strawberry—their coat of arms prominently displays silver strawberry flowers. One of the earliest records of a Fraser in Scotland is in 1109, where Gilbert de Fraser is witnessing a charter to the monastery in Coldstream.
In the 12th Century, with land grants as the lure, William I of Scotland recruits Norman knights in his continual territorial battles with Henry II over Northumbria and The Borders. Most likely, this is how the early Frasers establish themselves in the land of Alba, blending in with the native Scots. By 1160, half the area of Keith in East Lothian are in possession of Sir Simon Fraser (sorry for the confusion, but certain favored names reoccur within families and the Frasers are no exception: Simon, Hugh, Alexander). In addition, the family acquires land in the Tweed Valley,  Stirling, Angus, Inverness and Aberdeen—many of these acquisitions  are accomplished by fortuitous marriage arrangements (well, guess  even back then, those Fraser men could certainly charm those heiresses and more importantly their male relatives).

During the Wars of Independence (1297-1314), the Frasers were staunch supporters of William Wallace and  Robert the Bruce. Sir Simon of Oliver and Neidpath was married to the Bisset heiress which granted him lands around Beauly. Unfortunately, this Simon would be captured and met a gruesome death in London.  For his loyal service in the victory at Bannockburn, Simon’s son, Sir Alexander of Touch-Fraser and Cowie is not only the Bruce’s Lord Chamberlain but also his brother-in-law through marriage to Lady Mary (who did the matchmaking for that arrangement?  the Millionaire Matchmaker?? oops, did a bit of time travel just now) His grandson will then obtain, (how else?) through a marriage contract with Lady Johanna, the Earl of Ross’ heiress, the estates of Philorth.  In the early half of the 17th Century, another Sir Alexander will not only be laird of Pilorth but also Lord Saltoun. This  branch of Frasers are a lowland family, separate from the Highland Clan Frasers. Here’s why. 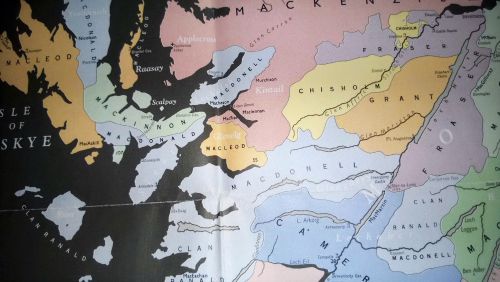 Sir Alexander’s younger brother, Sir Simon married the Earl of Caithness’ daughter, the Lady Margaret Sinclair, heiress of Lovat. He is the MacShimidh as all Fraser chiefs are called. Their traditional territory included Stratherrick, Inverness-shire, Beauly  and Strathfarrar.  Unfortunately, for this Sir Simon, he was killed in the Battle of Halidon Hill in 1333. One of many battles fought in the Second War of Scottish Independence.  Even after Robert secured his kingship, followers of the  Balliols with their own claim to the throne, as well as discontented Scots and Anglo-Normans who were displaced because they sided with them, waged continual battles to uproot Robert’s successor, David II. In 1458, James I bestows peerage to Hugh Fraser, the first Lord Lovat.

Let’s jump ahead to the 9th Lord Lovat, another Hugh, (1666-1696).  Poor guy—all he had were four daughters, Amelia his eldest and thus his heiress; but, he  decides to will the estate to his uncle, Thomas of Beaufort.  Yet, traditionally, in clan society, the usual practice was for the eldest daughter,  the heiress to marry the closest male relative bearing the family name. Certainly that was the expectation of Sir Thomas’ son. Here’s the Outlander connection…Thomas’ younger son is…Simon, ‘the Fox’ who will be the real grandfather of our fictional Jamie.
Once again, Scotland was destabilized over the issue of monarchy and religion. James II’s openly Catholic faith puts him at odds, not only with  the Anglican elite in London, but  also with the Scottish parliament and its strong ties to the Presbyterian Covenanters.  His core support came from the Highlands.  The Fox, was a student at Aberdeen University but left to fight in the first Jacobite rising. As a result of a mortal wound sustained in battle,  his elder brother’s death  made Simon, the tanist. 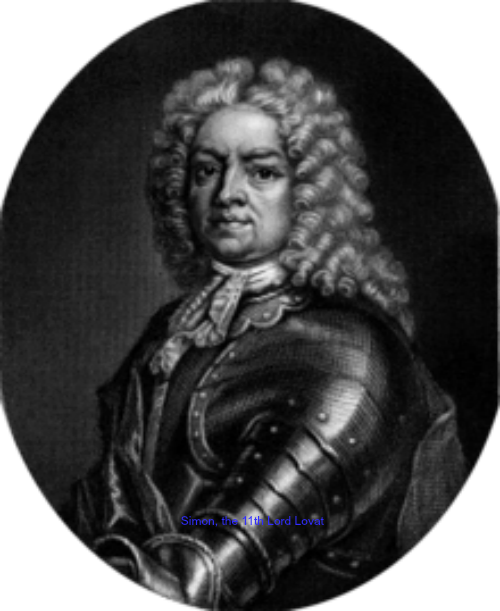 Politically shrewd, at times ruthless, Simon  certainly had no problem switching back and forth amongst various rival parties particularly if it suited his own and his clan’s interest.  With the passing of Sir Hugh in 1696,  Simon’s father, Thomas becomes the 10th Lord Lovat. But the Murray clan called this claim into legal dispute.  As uncle and ward to Amelia Fraser,  John Murray,   reveals a cleverly inserted stipulation in the marriage contract  between Thomas and his Murray bride which allowed for an heiress to marry any male provided he would assume the name Fraser (and not requiring an actual blood relation). In a desperate and ruthless act, Simon kidnaps and subsequently  marries the dowager Lady Lovat. Although the marriage was annulled, what ensued was  a protracted legal battle that often swayed with the political tides.

By the time Jamie enters the scene, the Fox is firmly ensconced as clan chief of the Highland Frasers.
Are you hoping that in the upcoming season, Jamie’s Grandfather will  makes an appearance?  Do you feel any of this history influenced the development of Jamie’s character or political views?