Today marks the beginning of Samhain – the Day of the Dead – an ancient Celtic holiday when spirits are free to roam amongst the living.  In addition to alluding to a number of Gaelic feasts such as Samhain, Outlander is full of references to many Highland myths, symbols and superstitions passed down over generations of the Celtic people.   Mythology and folklore touch every aspect of Claire and Jamie’s adventures and many of the colorful characters they encounter along the way.  So, as we observe Samhain, what better day to examine a few aspects of Outlander’s rich world of symbolism and imagine how life must have been when medicine and science were often cast aside for demons and superstition. Let’s begin…

In Episode 1 of the STARZ series, Frank Randall memorably says to Claire, “There’s no place on earth with more magic and more superstition mixed into its daily life than the Scottish Highlands.”  How prophetic that turn of phrase proved to be as we moved forward with Outlander’s many epic tales of travel, adventure and peril.  Of course, all of the television series is grounded in Diana Gabaldon’s wonderful novels and Diana knew you couldn’t base a story in 18th century Scotland and leave out what was so much a part of daily life at that time.  Superstitions and Symbols play an enormous role in Outlander often carrying over from book to book.  The references are so numerous and so vast, however, I will try to concentrate on exploring just a few and maybe passing along a few tidbits that you might not have known!

The “veil of time” is often referred to in Outlander.  It’s believed that Claire – on the eve of Samhain – was able to more easily pierce the veil and travel back in time – however unwittingly – due to the astronomical orientation of the stones at Craigh na Dun.  Or, at least that’s what Diana Gabaldon decided the stones would be used for!  In Diana’s research on Scotland, she read often of Stone Circles and their supposed astronomical powers.  In some legends, the stones were transported to places such as the Highlands and other locations throughout Europe by Celtic Giants.  Frank Randall makes this point as he and Claire ventured to the stones in Episode 1, “Sassenach” to observe the Druids’ sun dance.  Some stones are said to move around from site to site and others were known to make noise, such as the loud buzzing and roaring that Claire heard at each of her trips to the stones at Craigh na Dun.   While Craigh na Dun is fictional and does not actually exist, there are over 900 actual Stone Circles or structures across the United Kingdom.  Some of the most famous are Clava Cairns near Inverness.  And, there are several relatively recent discoveries of Neolithic sites on the Orkney Islands — in the remote northern isles of Scotland.  Diana Gabaldon recently visited Orkney and was quoted as saying that Orkney and its prehistoric beginnings spoke to her and that she will write in some future book about Master Raymond, the quirky apothecary who befriends Claire in Book 2, “Dragonfly in Amber.”
“The moment I looked at Skara Brae, I said, OK, this is it. This book will focus on Master     Raymond, and Orkney is part of his story.  I don’t know what the whole story is yet—I just feel this deep resonating connection with him in Orkney.”  (Diana Gabaldon interview with National Geographic, August 10, 2014).


Skara Brae is an ancient stone village – one of Orkney’s most visited sites and regarded to be one of the most remarkable monuments in Europe.  Radiocarbon dating in the early 1970s confirmed that the settlement dated from the late Neolithic — inhabited for around 600 years, between 3200 BC and 2200 BC.  Sounds just about right for Master Raymond.  Can’t wait for that book!

And, of course, in the Outlander novels, Stone Circles are usually associated with Druids.  In Episode 1, Frank and Claire arrive before dawn on Samhain to watch the Druid dancers perform their secretive and mystical dance as the sun slowly rises above the Stone Circle at Craigh na Dun.  I thought “Druids” were just mystics, fortune tellers or believers in ancient folklore, following traditions left to them by generations past.  And, I believed they were mostly women.  But, actually Druids are much more than this and their origins and that of “Druidism” go back many thousands of years to ancient times – perhaps even prehistoric times.  A Druid was a member of the educated, professional class among the Celtic peoples of Gaul, Britain, Ireland, and possibly elsewhere during the Iron Age. The Druid class included lawyers, speakers, poets and doctors, among other learned professions, although the best known among the Druids were the religious leaders.  There is also a lot of folklore about how Druids performed blood sacrifices – both human and animal – often as part of ceremonies at Stone Circles.  This practice is quite dramatically depicted in Gabaldon’s third book in the series, “Voyager” but I won’t spoil it for those who have yet to read.   Mrs. Graham, Reverend Wakefield’s canny housekeeper, therefore, was seemingly an unlikely Druid.  My guess is that she was more likely reflecting traditions passed along to her from her ancestors, yet, as we see in Episode 108, “Both Sides Now,” Mrs. Graham had a very clear vision of what could have possibly happened to Claire and showed no lack of confidence that what she relayed to Frank about Claire’s disappearance was, in fact, the truth.  Either way, Mrs. Graham’s dramatic appearance as the leader of the Sun Dance Crew at Craigh na Dun certainly brought many of the ancient myths of Stone Circles, Druids and the mysticism associated with both all together in a most theatrical way. 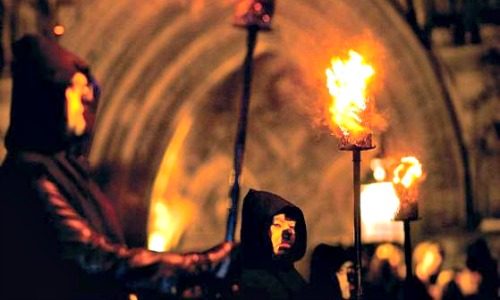 And so, while Frank may have been initially confused as to whether Mrs. Graham and her band of dancers were Witches or Druids, we see many references throughout the early Outlander novels to Witches and sorceresses.  And, unfortunately in Book 1 and Season 1, Claire’s association with one Geillis Duncan plus her reputation as a charmer, or healer/conjure woman, put her in a few sticky situations from which she almost did not emerge with her life.  Claire is plagued throughout the first several novels with the label “White Woman” or “La Dame Blanche” as she seemingly knows too much about medicine and the future which many in those times believed was the domain of Witches.  Approaching Samhain one may come across the Scottish baobhan sith (pronounced baa’-van shee), also known as the “White Woman of the Highlands.”  This fairy creature lives in the mountains and is known for sucking the blood of naive travelers who she is able to lure into her trap.   Not such a great affiliation for poor Claire!  Although 18th century Europe hovered on the edge of the Age of Enlightenment, in the rural villages and remote reaches of the Scottish Highlands, even learned men and women continued to retain strongly held beliefs about the power of the devil and demonic possession.  The devil, in fact, was very much a part of daily life.  We can see this clearly when even a highly educated man such as Colum MacKenzie believes that a child’s death was the result of Satan’s work.  Of course, upon observation of another sick child, Claire doesn’t buy the widely held belief that the child’s ailment is the result of demonic possession.  And, when Claire is able to cure the child through the application of an herbal antidote, suspicion grows deeper that she is, in fact, a Witch.  This leads us to the histrionic Crainsmuir Witch Trial.   However, interestingly, this is where Diana Gabaldon knowingly strays from the history books given her research uncovered that the last known witch trial in Scotland took place in 1722 – some 20 plus years before the Trial in Outlander.  I was delighted to come upon this quote from Diana when doing my own research that explains why we, thankfully, still got the memorable Crainsmuir Witch Trial in Book 1.

“So, I was telling my husband that I’d really like a witch trial, but it doesn’t fit.  He looked at me and said, ‘You start right off with a book in which you expect people to believe that Stonehenge is a time machine, and you’re worried that your witches are 20 years too late?’  [Laughs] So, I did stretch that point.  I figured that possibly this witch trial was an ad hoc affair that didn’t make it into the record.  That’s the only place where I can remember I deliberately moved something that I knew was not quite there. (Diana Gabaldon interview with National Geographic, August 10, 2014.)

So, there you have it.  Thankfully for us, Diana shifted time (again!) and gave us one of the most vivid and dramatic scenes in Book 1 and Episode 111 of the TV series, “The Devil’s Mark.”  Unfortunately for Claire, her reputation as a Witch or “White Woman”  never quite leaves her as we see in subsequent books in the Outlander Series.  I think there is a part of Claire who wonders whether the power she possesses as a healer may, indeed, be something more of a mystical nature. In Episode 103 of the STARZ series, Geillis says to Claire, “There are powers beyond our ken – beyond what we can see and hear and touch.  Demon, fairy, devil, doesn’t matter what name we put on them.”  When Claire looks skeptically at Geillis, she adds, “Have you ever found yourself in a situation that has no earthly explanation?”  At that you see Claire’s face cloud as she remembers her mysterious trip through the stones at Craigh na Dun. 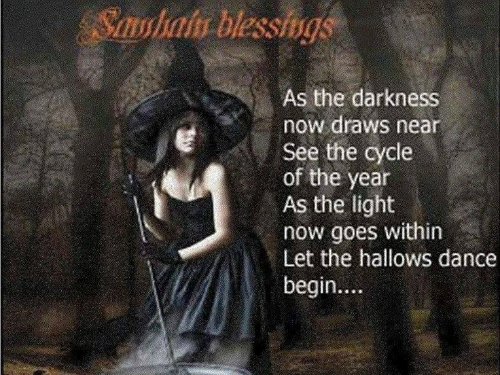 Finally, on this eve of Samhain, remember to stay alert as the sun sets and night falls.  This is a day where the spirits are close and fairies are known to be particularly active.  Spirits and souls of loved ones have more power tonight and an enhanced ability to visit.  Hopefully, the visiting spirits are welcome.  Or, maybe you’ll be lucky enough to see Jamie’s ghost!   Either way, it’s a good time to pay respect to ancestors, family members, friends, pets and other loved ones who have passed on.  And, also, a wonderful time to rejoice in the gift of Outlander and the history, superstitions and wonderful symbolism of 18th century Scotland.  Samhain Blessings to all! 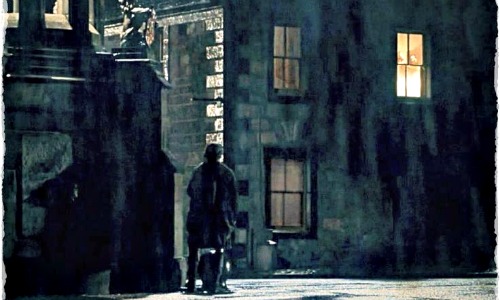 What is your favorite Scottish folklore story?  Do you think you might be accused of being a witch if you traveled back in time?  Are you dressing up as a character from Outlander for Samhain?
Note: If you would like to read more about this topic, I highly recommend “The Symbolism and Sources of Outlander” by Valerie Estelle Frankel, which served as a reference for this post.   Available via Amazon.