The Kidnapping of Cardboard Jamie Fraser

Anyone who’s a serious fan of Outlander (as in people like me who have Outlander Obsessive Disorder a relatively new form of OCD) likely has her own story/stories of obsession. In fact, I’ve read a lot of them on Tumblr and Facebook. Mine has to do with an almost lifesized Jamie Fraser cardboard cutout. But let me start at the beginning…

On Dec. 26, 2014, I was just another middle-aged working woman. On Dec. 27, 2015, I started reading the Outlander book series, and for all intents and purposes, went through the stones. Because life as I knew it has never been the same.
I had had the book on my reading list for a while but for some reason had put it off. Then my friend — we’ll call her Anne to protect the guilty since she figures prominently in the kidnapping — called a few weeks after the Starz show began airing and left me this voice message: “Are you watching Outlander? You have to watch this show! It’s so YOU!! Call me.”

Now I’m a bit of a book purist — I would not let my daughter watch the iconic Gregory Peck To Kill a Mockingbird movie until she read the book, and I’m a serious fan of both. I called Anne, who raved for about two minutes about the show and, um, yes, the lead actors and, um, yes, the romance and sex (maybe not in that order). But I told her I was going to read the book first.

By page 30, I was gone. As in 100 percent waking-up-at-5:30 a.m-to-read obsessed. I took personal days from work to read. I stopped talking to my family. The dog looked at me with doleful eyes wondering why we no longer took walks more than five minutes.

But the book was just the beginning. After I finished Outlander, I watched the show and my obsession moved from to an 11. I joined Tumblr solely to follow the innumerable bloggers creating Outlander GIFs and screenshots and posts — and then checked the feed multiple times daily. I created an Outlander list on my Twitter feed. I joined Facebook groups, including one dedicated to Outlander knitwear. And, of course, I rewatched the show countless times, all while plowing through the books for the first time. (I finished Written in my Own Heart’s Blood in April, waited about 10 days, couldn’t stand life without Outlander, and started rereading. To date I’ve reread books one through three.)

Which brings us to the kidnapping.

Barnes & Noble ran a national Outlander event in early July. My local B&N had a sign-up table where you could register to win a copy of The Outlandish Companion, the first eight episodes on DVD and, the lifesized Jamie Fraser cutout standing at the display. My neighbor, one of my many Outlander converts, went with me. We had one mission: We were going to win. Failure was not an option. 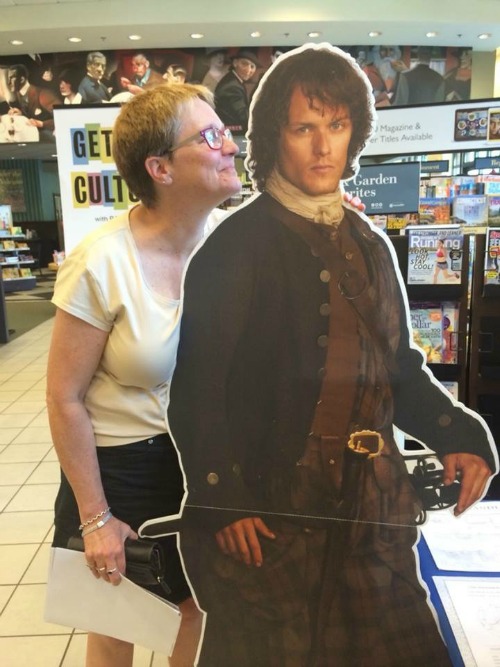 So we did what any self-respecting Outlander fan would do. We stuffed the ballot box. We filled out dozens of registrations, after first making it clear to a couple of the sales people running the event that really there was no point looking at any of the other ballots. One of us was winning, end of story. I already owned The Outlandish Companion (you’re surprised to learn this, I know) so my neighbor and I agreed, she could have the book. I would get the DVD set and Jamie.

Forty-eight hours later I got the call. I’d won! I hightailed it to the store and picked up Jamie and made my fatal mistake. I posted this image on Facebook with this comment: “Look who’s visiting me Anne.” 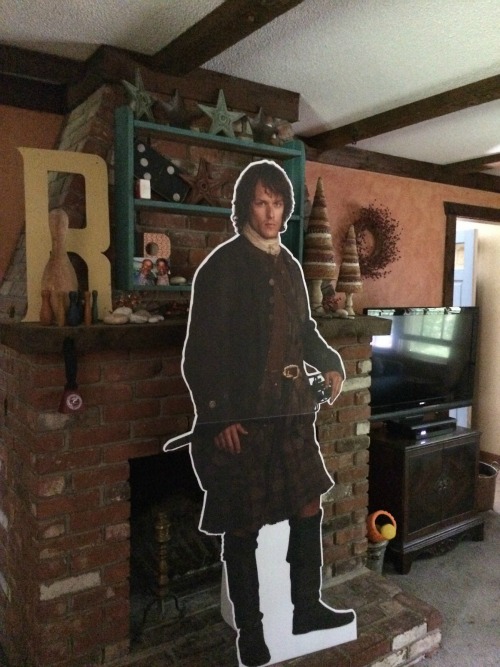 Anne’s daughter commented within seconds. “Mom is going to plotz when she sees this!” “I know” I gleefully wrote back. And then I went upstairs to work.

Fast forward a couple of hours. I am writing and my phone suddenly buzzes. I’ve got a text from Anne. I open it and there is an image of Jamie in bed. Anne is lying next to him smirking. The text: “Now it’s just a question of ransom.”

What? How did she get Jamie? I walk downstairs to the hearth, where Jamie had been standing watch. Empty. I head to the porch where my sons sit. “Where’s Jamie?” “Anne came and took him.”Apparently they are more afraid of Anne than me.

But there was no time for dealing with them. I needed to save Jamie.

I hopped in my car and drove to Anne’s house. I parked my car behind some bushes near her home and snuck into her garage where I grabbed a few whiffle ball bats. You can’t go into a battle unarmed. Then I snuck up to her kitchen door, where I saw Jamie standing at the far end of the galley kitchen near her front door.

I knew her front door would be unlocked so I snuck under the kitchen windows along the front porch. I reached the front door. Jamie was within reach! All I had to do was quietly open the screen and grab him. I could be back in my car before Anne knew what had happened.

There was just one little glitch. Anne’s grandson stood a few feet away from Jamie. I motioned to him to be quiet and then opened the door. I had my hands on Jamie when Anne rounded the corner. “You can’t have him!” I yelled — at which point we began dueling with the bats, laughing hysterically.

And that, my fellow Outlanders, is part of the beauty of these books and this show. For one sweet summer afternoon, two middle-aged women who have plenty of issues in their “real” lives were transported back in time to when they were 10, the days of hide-and-seek and capture the flag and playing with friends. For one delicious moment, the stones were, indeed, real.

How Outlander-obsessed are you? We’d love to hear your story of something obsessive you’ve done for your Outlander love!