Divided About Dougal: Is the War Chief a Good Guy, Bad Guy or Something in Between?

Neither one of the MacKenzie brothers are what I would call warm and fuzzy. They are Highlanders through and through. Both are tough, gruff, extremely intelligent and, in different ways, singularly ambitious. But, it is Dougal MacKenzie who plays an integral role in Jamie Fraser’s life from a very young age. And, one could argue, he plays quite a large part in Claire’s 18th century life almost from the moment she falls through time. Throughout the early novels in the Outlander series, Dougal remains a puzzling character. At once loyal, caring and fiercely protective of his Clan family – including his nephew, Jamie – but at the same time ruthlessly ambitious, brutal, cruel and calculating. So, who is the real Dougal MacKenzie and what lies at the essence of this complicated man? Let’s see if we can get to the bottom of the question of whether Clan MacKenzie’s War Chief is a good guy or a bad guy…

I’ve been endlessly fascinated by the Dougal MacKenzie character almost from the beginning of my Outlander journey. My first impression is that he was a man to be feared. Physically imposing, he commands the attention and respect of the other men. While, the other clansmen seem course, uncultured and prone to savagery, Dougal maintains an air of refinement first displayed when he gave Claire a pass on the notion that she might be a “whooor.” A disheveled and confused Claire makes her way unwillingly to the crofter’s house above Inverness to find herself whisked away once again. It seems the War Chief has no time to decide if Mistress Beauchamp is either a whore or something else entirely. And, Dougal shows little mercy for his nephew, Jamie, lying bruised and later, seriously injured, after yet another skirmish with the British. Dougal doesn’t appear to be the slightest bit interested in anything that distracts him. And, when the men do return to Leoch, Dougal takes his place next to his brother in the Great Hall – saying little – but conveying so much with body language and set of jaw. The tension beneath the War Chief’s countenance seethes like slithering snakes as Dougal steps forward to deliver his “Oath” to Colum and the Clan MacKenzie. Not a man to trifle with but one that knows his place – at least for the present. At this point in the story, one can see very few, if any endearing qualities in Dougal. Clearly suspicious of outsiders, particularly one well-spoken Sassenach and her mysterious knowledge of English ambushes, Dougal vexes Claire’s early days at Leoch – setting his men after her to follow wherever she goes. As if 18th century life wasn’t hard enough, Claire has to deal with Dougal’s constant scrutiny and that of his malodorous acolytes. 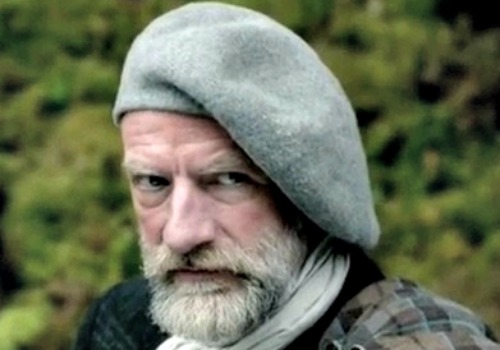 Then, we see it – or Claire sees it. Dougal’s light-hearted play with Hamish, and good natured teasing of the young boys in the Castle courtyard. Dougal seems to genuinely enjoy roughhousing with the boys with even a few chortles of laughter escaping his roughly bearded mouth. Like Claire, we wonder if maybe the man has a soft spot? And, then we really get to wondering when we witness how Dougal reacts to the mortal wounding of his clansman friend, Geordie, during the boar hunt. Dougal ever so gently cradles the man as Claire nods slightly to indicate that Geordie’s time on earth is short. We even begin to believe that the moistness in Dougal’s eyes as Geordie slips away, is indeed sadness and regret – even as he admits to bedding the man’s sister. We learn rather quickly in the story, as does Claire, that Dougal loves the lasses! Still, though…I begin to understand that Dougal’s primary motivation is the preservation of his Clan. Losing even one man, one member of the clan, elicits deep sadness in Dougal. So, we begin to think, maybe the man can FEEL. We then really begin to see Dougal’s commitment to Clan as the Rent Party sets out. For Dougal, it’s the Clan, Politics and the Clan – in that order. Douglas’s focus – Preserve the clan in order to build support (money and man power) for the Jacobite cause which is all done with the hopes of returning the Scottish Catholic King to the throne and maintaining the Scottish clan culture. Whew! OK…now we get it. We also begin to see what lengths Dougal is willing to go to carry out his plan. Dougal shows little to no regard for the feelings of his nephew, Jamie, as he ruthlessly strips him night after night to expose the handiwork of the English on Jamie’s mangled back. It’s humiliating but Dougal cares not as night after night, the unveiling gets the desired result – more gold coins for the Jacobite Army. 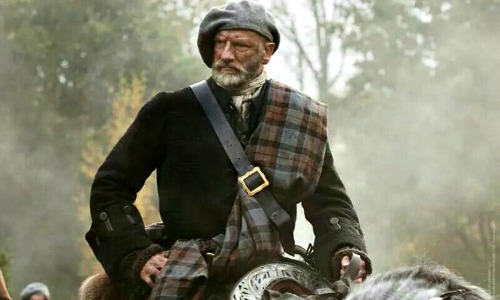 And, then, I really get to thinking that perhaps Dougal isn’t really a bad guy because after all, he saved Claire from Black Jack Randall’s brutal interrogation even after harboring his own suspicions about Claire and her loyalties to the British. Very chivalrous, indeed, given he could have just as easily left her to suffer an unknown and likely, highly unpleasant fate, at the hands of Black Jack. And, really…wasn’t it nice of Dougal to offer to save Claire from being delivered back to Black Jack by having her marry his young and strapping nephew, Jamie? Yes, this act conformed to his plan of world domination of Clan MacKenzie, but he could have accomplished this without the marriage proposal. And, then again, Claire would never have known about Jamie being in Wentworth Prison if Dougal had not sent for her, told her and then lent her his men to mount a rescue. Book Dougal is much more sympathetic in this particular scene in the cave than TV Dougal. Read it again. He laments the loss of Jamie as much as Claire and is genuinely upset that the lad was captured and faces death.

Now…before I go on any more about Dougal’s gentler side, there are certainly times throughout the early novels, especially as portrayed in Season 1 of the STARZ series, where it’s clear that Dougal’s machinations regarding the return and revival of a Scotland ruled once again by a Catholic King, are top of mind for him – above all other things. And, it’s certainly clear that despite being a married man, Dougal enjoys bedding the lassies and doesn’t seem to mind much if they are married themselves. Distasteful even for 18th century Scotland. Yes, manipulative, at times, and often sharp elbowed in his approach, he’s a man who knows what he wants and is willing to do pretty much anything to reach his goals. In thinking this through, I suppose I could be offended at some of the courser actions that Dougal takes and write him off as a man without a soul. But, when I really look at the “why” behind Dougal’s sometimes questionable behavior, I realize that the motivation is pure. The motivation is honor, family, clan and a deep, deep pride in heritage, culture and tradition. Those are not heinous pursuits. Quite the contrary.
And, here’s the thing. Maybe the reason we are so fascinated by Dougal (and yes, attracted to him) is that in many ways, he mirrors many of the traits and characteristics of our young protagonist, James Alexander Malcolm MacKenzie Fraser. Think about it. Both men, passionate and hot-headed at times. Both men, warriors, known for their fierce fighting skills. Both men, attracted to strong, intelligent women. Both men, stymied from being proper leaders – one because he is an outlaw and therefore unable to take his proper birth place and one because he must fall in line behind his brother. Both men seek to maneuver and even manipulate situations to meet their goals. In Jamie’s case, we see this play out quite dramatically in Book 2 “Dragonfly in Amber” during the Frasers’ time in Paris as Jamie seeks to slow down and stop the Stuart rebellion. And, of course we come to know well Dougal’s maneuverings regarding restoration of the Catholic King.

So, is in fact, Jamie Fraser a younger version of his Uncle? Maybe without the influence of Claire, Jamie could have gone on to become as ruthless and single minded as Dougal. The apple falls not far from the tree, as the saying goes. But, to steal a line from Jenny Murray, “love forces a person to choose.” Jamie’s love of Claire and love of family make many decisions for him during the Outlander series. Jamie could have taken a different path, a path similar to his Uncle’s but he chose differently on many occasions – motivated by a selflessness that Dougal never felt. Perhaps Dougal’s biggest problem is that the only real love he felt was to a notion – a tilting windmill – that would never, ever succeed. This all sets us up for the clash between the two men in Book 2, “Dragonfly in Amber” and Season 2 of the STARZ series. I predict it will, in fact, be EPIC! And, then we may ask ourselves if all of Dougal’s chess moves were really worth it for him in the end. 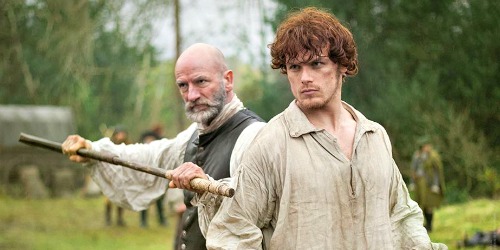 So, I am going to give Dougal a pass on all of his distasteful and heinous acts throughout the early novels. These MacKenzie men are passionate and powerful – qualities I admire. While Dougal is capable of altruism, he chose that path but only a few times. However, I believe he is at his core, a good guy just blinded by loyalty to a lost cause that for him, represented the only way he could see to preserve his family and his heritage. When you think of it that way, my heart softens a bit for Dougal despite some of his more malevolent qualities. And, if you love Jamie, I think you must love and appreciate Dougal as well. For indeed, they are cast from the same mold.

Lastly, no examination of the Dougal MacKenzie character is complete without huge kudos to Graham McTavish, the accomplished Scottish actor who portrays TV Dougal. A more magnificent man could not have been chosen for this role. Truly brilliant. Another casting tour-de-force by the people at Sony/STARZ. Bravo Graham and STARZ and THANK YOU!

Are Jamie and Dougal two sides of the same coin? Which heinous act of Dougal’s do you dislike (or like!) the most?