Why Angus, Rupert and Ned Gowan are such wonderful Outlander TV additions

As I’ve noted before in this blog, I’m a book purist. That said, I love a good adaptation, and few books have been better translated to the small screen than Diana Gabaldon‘s wonderful Outlander series. But while some might quibble with certain choices Executive Producer Ron Moore and his talented crew made in the parts of the first book they included in the TV series, these producers were brilliant about what they decided to do with three fairly minor book characters: Angus, Rupert and — my particular fave — Ned Gowan. Here is an example of less certainly being more.

Let’s start with Angus and Rupert. In the book, they’re in the clan but mostly as sidekicks. Angus is Colum Mackenzie’s body guard and little else, while Rupert is Dougal Mackenzie’s right hand man. They provide a few chuckles in wedding night advice to Jamie, too, but mostly they’re minor figures. In the TV show, thanks to their expanded roles and the wonderful acting of Stephen Walters and Grant O’Rourke, this Mutt and Jeff duo alternates between serving as the comic relief and as vehicles for important character development, especially for Claire.

Initially given the task of keeping tabs on Claire around Castle Leoch because Column and Dougal believe she’s a spy, the men bumble their way through trying to keep up with this wily woman. While doing so, they cast aspersions on each other at various points — many of them references to animals and the apparent preference of the other for certain ones when women aren’t available — and provide some fun comedic side notes.

But there’s a purpose to the ineptitude: They help illustrate Claire’s cunning. Take “The Gathering,” for instance. Claire is hell bent on escaping that night. To do that, she must elude her guards. So first she appeals to their general interest in “grinding their corn” with just about any woman they pass in the wonderfully acted “drawing sticks” scene.  Though Rupert comes up short on the draw, Angus fails to seal the deal and Rupert wins out in the end. With Rupert now otherwise engaged, Claire shows her guile and determination by sedating Angus. Have you ever seen a more lovable drunk?

The men also help illustrate Claire’s growing appreciation of Highlander life. Always feisty Angus leads the fray in the pub after the other men call Claire a whore in Gaelic. The Mackenzies can mock Claire, Murtagh points out as she cleans up the men post-fight and complains about how juvenile they are, but no one else can call her names. They will defend her honor to the end. Lesson one for Claire about the concept of loyalty, something she values. It’s a critical step toward her understanding that these rough men are actually not uneducated and uncivilized. 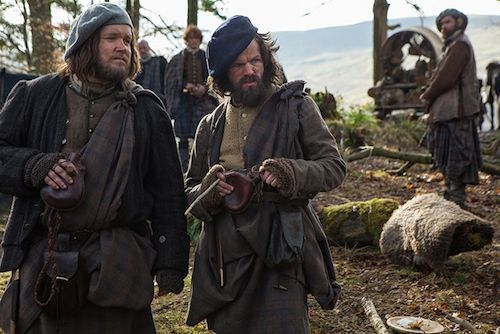 In episode 8, “Both Sides Now,” Claire’s lessons continue — literally — as Angus teaches her how to use a sgian-dubh — with Rupert of course offering a running comedic commentary. Learning to defend herself is just another way Claire is becoming a Fraser through and through.

These scenes all develop Claire’s understanding of the Highlanders in general and the Mackenzies and Frasers in particular, and are important vehicles to help illustrate one of the show’s important themes: the value of loyalty. The climax of how far they’ve all grown is the finale, in which Angus and Rupert — admittedly after Willie shames them by volunteering first — agree to help Claire rescue Jamie from Wentworth Prison.

This growth is evident in their good-byes as Jamie and Claire head to France. Rupert bids a heartfelt (and appropriate) farewell, while Angus makes one final (classically inappropriate) gesture in the GIF that has traveled the world. So wrong and yet so deliciously right. 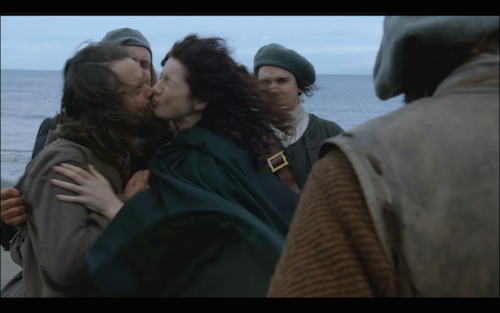 While Ned Gowan has a bigger role in the book than Rupert and Angus — he is Column’s lawyer and advisor after all — he is still a fairly minor character in a book nearly 900 pages long. That he and Claire will develop a special, deeper bond in the TV show, however, is clear from their first meeting, in which he joins Claire lakeside in repeating a John Dunne poem. Juxtaposed against the clansmen taunting Willie by the fire and urging him to have, as Ned puts it, “sexual relations with his sister,” Claire realizes she has found an intellectual equal among a group of men that — so far — she considers crass and beneath her.

Their friendship grows throughout the “Rent” episode as they travel on the road and Claire learns more about clan life. Throughout this “education,” Ned, portrayed perfectly by Bill Paterson (winner of a BAFTA Scotland award this week for outstanding contribution), serves as both her guide and her foil. Claire initially jumps to some erroneous conclusions about what Dougal is doing each night when he strips Jamie’s shirt off his back and gathers additional money from the tenants. It is Ned with whom she tests her theory — and with whom she ultimately shares her new understanding of what’s really going on. 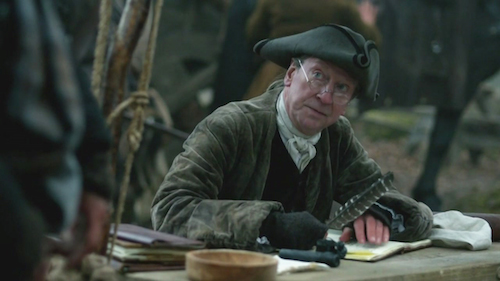 In “The Wedding,” Ned offers a legal way out of the Black Jack Randall predicament. But the TV show takes Ned’s role a delightful step further by depicting him getting the “decent” dress Jamie demands in a local whorehouse. Doesn’t Bill Paterson have the most wonderful dimples when he sheepishly smiles here?

And finally, “The Devil’s Mark.” Ned exposes himself to the wrath of his laird by going to Claire’s defense as she and Geillis are on trial for witchcraft. This happens in the book as well, but is not as well developed and is notably missing the final dramatic moment when Ned fires his gun and yells, “I will not let this stand!” — or words to that effect — as he’s carried off by the crowd.

Wonderful additions. Wonderful acting. I wonder what season two will bring with these three.

What are your favorite Angus, Rupert or Ned moments?