NEWS: Filming For The Last Block Of Outlander Season 2 is set to Begin In…

Outlander fans everywhere are breathing a collective sigh of relief that the end of Droughtlander is drawing nearer as the cast and crew get ready to film the final two episodes of the popular series. Executive Producer, Matt Roberts, posted on Twitter earlier this week that he was out scouting locations for the final block. 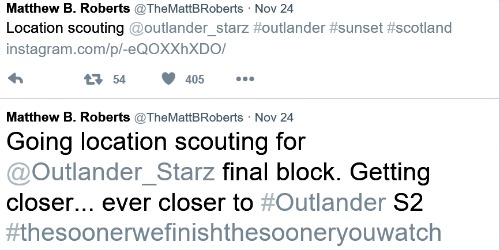 It looks like Matt found a good one, as sources in the historic town of Kilmarnock, just outside Glasgow, report activities around Dean Castle and Country Park indicate that Outlander filming is about to commence.  Earlier this week, parents of children who attend St. Andrews Primary School in East Ayrshire received a letter that said that the Car Park at St. Andrews will serve as staging area for a film crew and vehicles.  Sources also report that filming which will begin on December 4th and continue for approximately 10 days.  Dean Castle was formerly known as Kilmarnock Castle until approximately 1700. 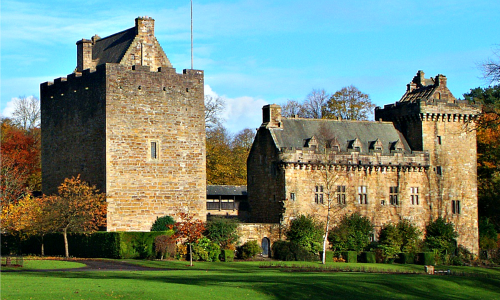 Kilmarnock is known for many things, not the least of which is that it is the home of Johnnie Walker Scotch Whisky. Interestingly, Johnnie Walker is the most widely distributed brand of blended Scotch whisky in the world, sold in almost every country, with annual sales of over 130 million bottles. In addition, Kilmarnock is home to the only school besides Cambridge and Oxford, to have produced two Nobel prize winners – Alexander Flemming and John Boyd Orr. They both attended the Kilmarnock Academy. Dean Castle was home to the Boyd family for centuries and houses an impressive collection of medieval armor and musical instruments. And, one of Scotland’s most famous native sons, poet Robert Burns’, first book of poetry in the Scottish Dialect was printed and published in Kilmarnock and is known as the “Kilmarnock Edition.”

The weather in Scotland has been frightful of late. The crew had to suspend location filming this week due to Blizzard conditions as tweeted by Sam Heughan’s driver. 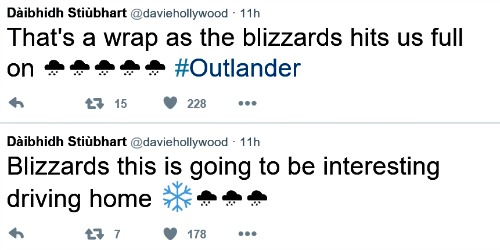 But, hopefully conditions will improve so that shooting for the final episodes can commence and this will bring us just a bit closer to the return of our beloved Jamie and Claire! 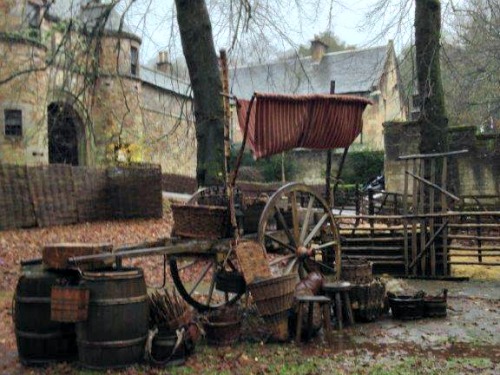 What Season 2 scenes do you think they will be filming in Kilmarnock and at Dean Castle and Country Park? What is your prediction for a Premiere Date for Outlander Season 2?