READ AT YOUR OWN PERIL NON-BOOK READERS
While I don’t have gossip on characters or casting or costumes to share,  I do have insights into TV writing and how I think Season Two will be portrayed on-screen.

How many times have we heard (or said) the same thing for Outlander S1?…

So let’s compare book versus screen, and the adaptation of detailed 947 page book into 13 sixty-five page screenplays. That’s 150,000 (min.) word count versus 65,000 (max.).  So yeah, at less than half the words, we should expect that a few details might be missing.

First, let’s look at “flashbacks” or the toggle between future, past, and future as is done in DIA.

Screenwriters do not like to use flashbacks.  There, I said it. Whew!   It’s preferable for a story to be told linearly on-screen.  Flashbacks lose continuity, immediacy and threat “in-the-moment”.  They also lose viewer connectivity to the story.

Think about DIA from a TV-only viewers perspective, not from a book-lovers viewpoint.  Ron D. Moore must assume that the “lowest common denominator” is watching- meaning those with no knowledge of the books, Scotland, the Stones, and (gasp!) those who didn’t watch S1!  So imagine if S2 started with Claire, like it does in the books.  You would always know that she would be okay.  You ruin the opportunity for high stakes for our main character.  Where’s the drama in that?

You can’t achieve the same sense of emotional impact no mater how good the scenes are from the past.  And on TV you won’t be able to give as much detail. (remember, it’s less than half the detail of the books)  While it’s important to know how they arrived at this junction, even better is to see dramatic scenes in the present with an unknown outcome.

Structure in a novel is less circumspect as you can flip back and forth, and re-read for better clarity.  With film or TV, you are unlikely or less likely to do that (of course, with binge-viewing, future screenwriters may want to take a different approach, realizing people will PVR and forward/rewind).

Now I don’t mean they’ll prohibit “quickflashes” which visualize something from a character’s memory (ie. Outlander flogging scenes) which were tremendous in gaining Jamie’s backstory.  There may be some in DIA, but I imagine when (not if, right Starz?) Voyager comes in 2017, we’ll see a lot more “quickflashes” again.

“Show and tell” for novelists becomes “show DON’T tell” for screenwriters.  I think this was the very first rule I learned.  Dialogue is simply not an engaging way to offer factual details to an audience.  Viewers can’t process nearly as much information when it’s merely spoken in dialogue.

Character development and situational factors are best exposed via dramatic, emotional, and entertaining scenes. The information is absorbed indirectly through character actions, and the actors portraying reactions and feelings to help audiences learn and understand the story.

Dialogue should never be just “exposition.”  The higher the stakes when it simply MUST be spoken, the better the scene and audience’s retention of what threat that scene was trying to convey. A good example is S1 Ep. 16, the brutal assault of Jamie by BlackJack.

“I know that there are a lot of people out there that hated this scene and felt that it completely diverged from the book.  It didn’t. The description in the book was not exactly how it was portrayed on screen, but only in that it was not as detailed.  Jamie told Claire that Randall aroused him. What exactly do people think he meant by that?”  https://justagirlwithspirit.wordpress.com/category/outlander-2/

So for Season Two, this is what I think we should expect to see:

An increased role for Murtagh.  Whom else is Jamie going to disclose things that Claire doesn’t know?  Also, aren’t the stakes higher for Murtagh’s fate if there’s more TV audience investment than only what’s in the books?  And the writers LOVE Duncan Lacroix.  It think casting exceeded their expectations and they WANT to write for him. 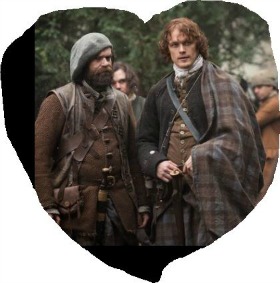 Scenes changed around or merged (including adding some into on-screen DIA that are originally in the book, Outlander like the hand scene, or in the book, Voyager such as BJR’s last act (I have some theories on this being his last act of narcissistic repentance).

Voice-overs added where none existed before (to allow for Claire to share her thoughts, like when she’s being healed).

Events displayed or dialogue added that needed to be said out loud, not just in a character’s head (sometimes we’ll see Claire do, rather than think).

Elimination of dialogue in moments where silence/screams/gasps would be more dramatic (yes, we all have certain favourite lines we want them to say but sometimes action IS better).

“Oh, I really liked the way you did it. it was a difficult plot, I know, but I think you really found the essence of it. You really found the through line that really defines what this part of the journey is.” So I feel good about it. It’s not going to be a literal adaptation because I don’t think that’s possible with the second book…. But I think it’s very much the same story, the major characters are all represented, the major scenes are all represented, and it still gets you to all the same places you want to go.
DIA adaptation-  Diana Gabaldon

I admit it, as a screenwriter by trade, I do a little “fanscription” for my own personal benefit- that’s fanfiction, but in screenplay format (I don’t go off story).  Doing these exercises, I’ve learned a lot about how to adapt from DIA to screen and the necessity to alter some scenes even slightly to show and not tell.  While not as difficult as writing an original story (right DG?), DIA’s adaptation still is not easy given the change between eras and disparate locations.

For instance, when the scene at Craigh Na Dun occurs, I think extra dramatic conflict will be added for Claire’s escape as she goes one way and then also for Jamie’s as he goes another.  Jamie doesn’t know what happened to her.  But we’ll need to see that Jamie and Claire’s safety, each, is in doubt to hook the TV viewer.
Couldn’t you picture him saying “Lord, let her…” here for the first time? 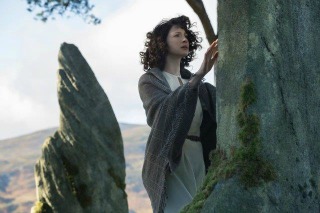 And then there’s the beloved Stones.  Do we need to see her go through/explain the Stones again or will we just see her on the other side, in utter and sheer devastation?  Well, we can’t count on the TV viewer being either a book reader or a S1 viewer, so…

Also, when Brianna is born, we’ll see Frank’s immediate reaction/connection.  Really, how connected would you be as a tv viewer to just hearing about it afterward? Perhaps he too won’t like the name…

As any book lover knows, the “spirit of the book’s intent” is here, but these are not the actual events transcribed by Diana.

Well, there it is.  It’s all speculation really but I find that awareness leads to expectations being met and not disappointed.

________
I have some ideas of how the the season’s plot lines will link through France, Scotland, and America.   Do you?

Do you have favourite lines that are “must have” in on-screen Dragonfly In Amber?

Do you want more Outlander chat? Get your fix by listening to The Outlander Cast Podcast with detailed show discussion and amazing interviews with cast, crew, writers and directors of Outlander on Starz.