The Outlander Crew has returned to Scotland after a whirlwind week in Hollywood leading up to the People’s Choice Awards and Golden Globes.  There were countless interviews, photo sessions, appearances, wardrobe changes and parties.  It was a heady week for all.  Several People’s Choice awards were bestowed and the Outlander cast, producers and fans basked in three Golden Globe nominations and all the attention from media, television critics and yes, even the Fashion Police!  Meanwhile Sam Heughan kicked off his 2016 #MyPeakChallenge and was kind enough to inform us of his daily work-outs while apparently battling a cold and fever.  Despite his infirmed state, Super Sam killed it on the Red Carpet in his Alfred Dunhill custom suit and even made several Best Dressed lists!  And, our beautiful Caitriona schooled everyone on how to walk a Red Carpet.  It was a fast paced, exciting week for Outlander.  I can only imagine the level of exhaustion all felt as the week came to an end and it was time to return to Scotland to complete filming the FINAL two episodes of Season 2.

But…it was clear that our crew had some party left in them as we were treated to a barrage of tweets last night as it appeared that some cast members spent the night out on the town sampling whisky and letting loose!  Caitriona Balfe started it all off with a teasing photo of future attractions. 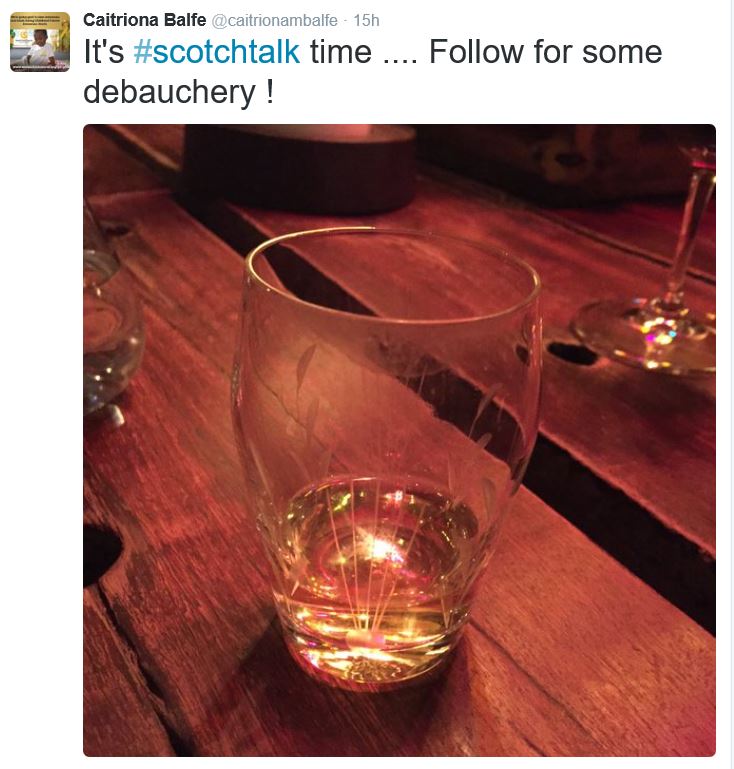 But, it was that devil, Grant O’Rourke (“Rupert”) who decided that the evening’s debauchery was just too good not to share. After Grant’s first photo of our merry group was posted, it was all downhill from there. 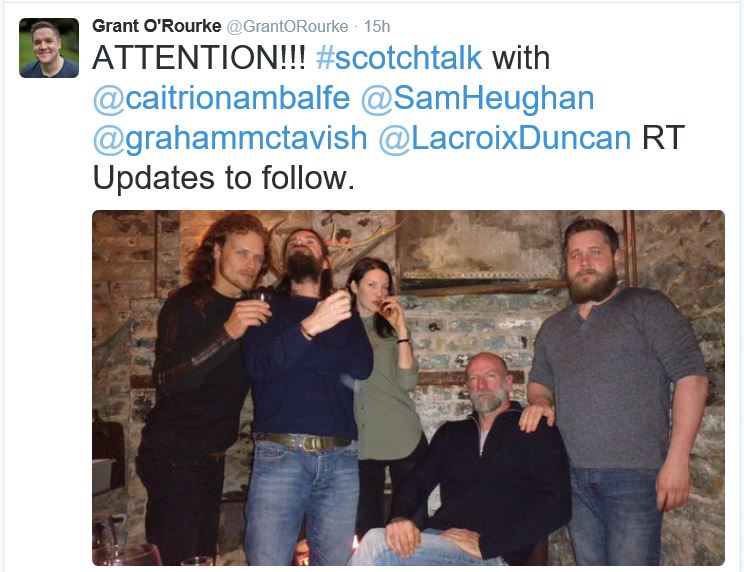 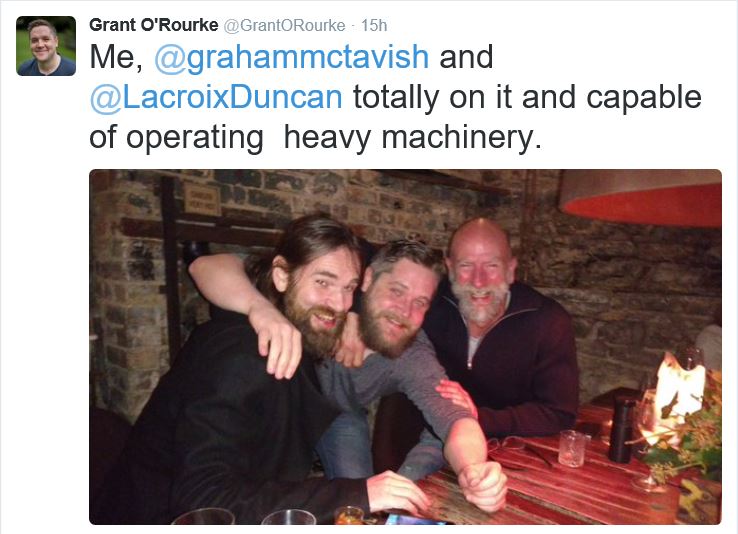 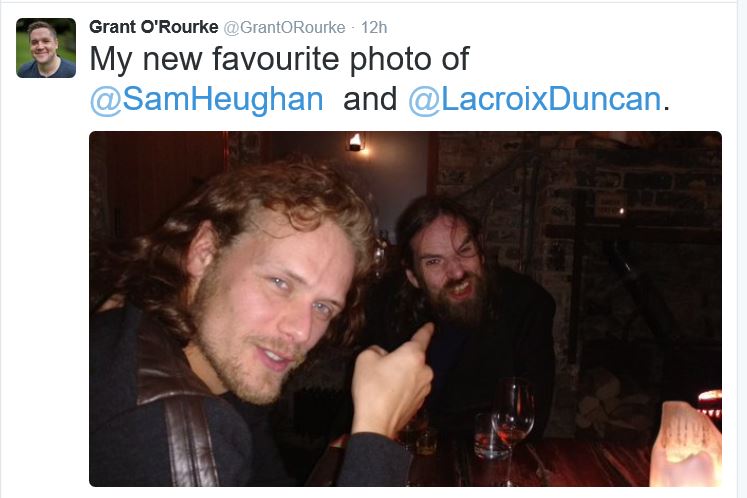 And, we see a wide variety of whisky was sampled including, Ben Riach, Elgin, Ancnoc and Bruichladdich, The Classic Laddie, amongst others I am sure. 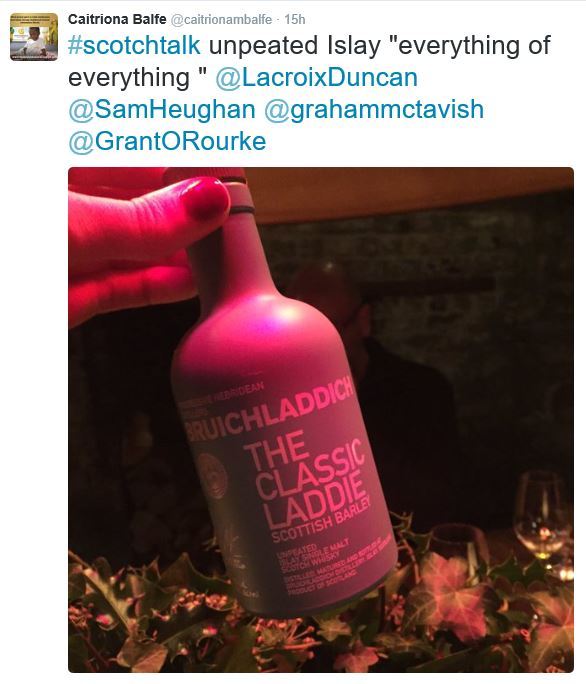 But some of the MOST entertaining snippets from the night came from (and about) Mr. Duncan Lacroix — Twitter novice!  Well, a novice no more!  Probably an understatement to say that Mr. Lacroix enjoyed himself last night.  But, NO JUDGMENT, Duncan.  What we really want to know is whether a Sword Dance was performed… 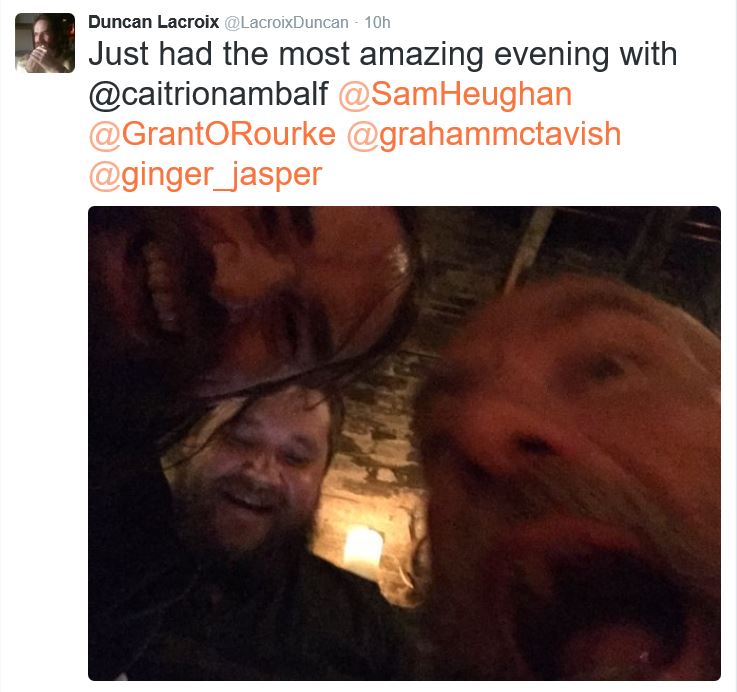 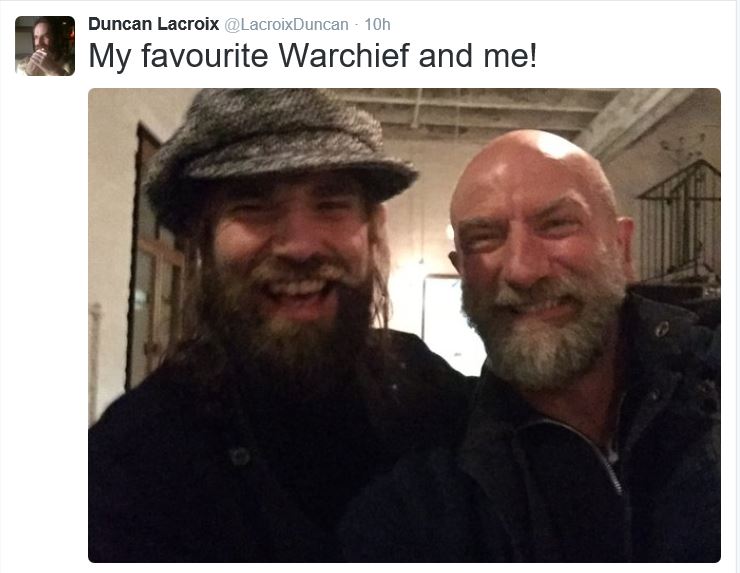 It appears that our Sassenach lived up to her reputation, as well, when Ring Leader O’Rourke reported the following…

And, not to leave the Shippers hanging, Caitriona obliged with yet another adorable photo of “Jamie and Claire.” 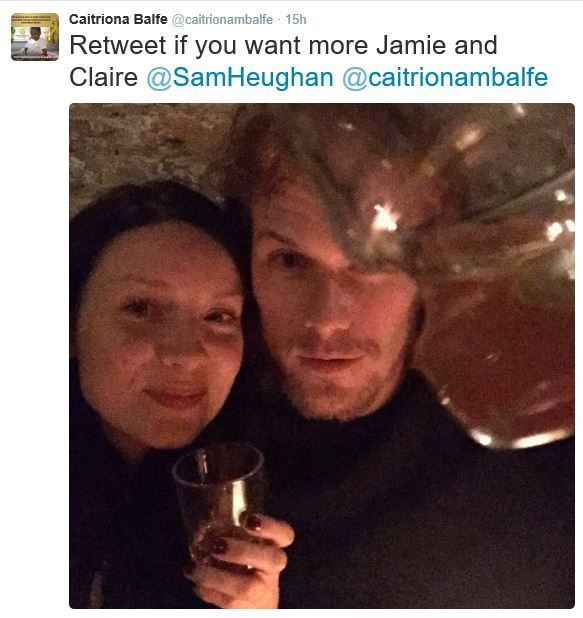 And, we are left with one final EPIC photo of our group on the way out of the pub…looking a little worse for the wear but who wouldn’t have wanted to join them?  Seriously, I would have given my eye teeth to have hung out with that crew last night.   There is a lot of joy amongst this group.  It’s one of the things that I think makes Outlander work and be so successful.  As long as they don’t, in fact, end up in a river or on the side of the road, I say PARTY-ON lads and lasses.  You have a lot to celebrate!  And, next time gang, please give me advance notice of #ScotchTalk so I can hop a plane and join you! 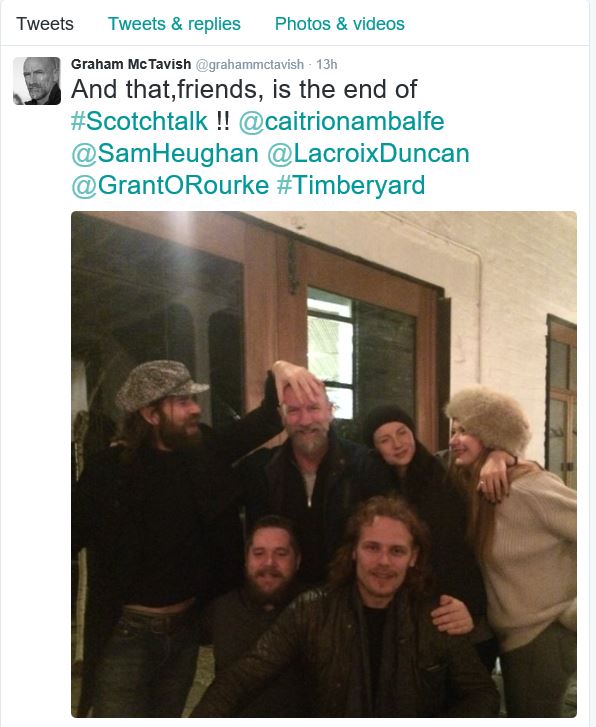 What would your Twitter caption and photo be if you had partaken in last night’s #ScotchTalk?