LIVE from the Golden Globes…

…or as live as we could have been watching the telecast on NBC from the comfort of my couch – stretchy pants on, feet up, wine poured, giddy to see our favorite Outlander stars included among Hollywood’s finest!

Did you miss last night’s Golden Globes? Have no fear, we’ve got you covered!

All night, we brought you every glam-drenched moment of the three-hour (well, SEVEN if you count the all-important red carpet pre-coverage) broadcast with particularly biased attention paid to our little Scottish show that could.

Now let’s get to the magic…

[4:02 pm] Sunday, Sunday, Sunday! It’s finally here.  What did your day look like? Today’s Golden Globes prep for us involved an early wake up, my three-year old son styling my hair, a Philly cheesesteak and yoga pants.  Wonder if Cait, Sam and the gang’s looked the same? Hmm, guess not.
[4:07 pm] Also, while on the phone with the male associate at Michaels on the hunt for an extra Outlander coloring book for tonight’s party, “Um, I have it, I think. Is there a lady and a dude on the cover? He’s, um, shirtless?” Yep, seems right. [4:24 pm] This is an endurance sport, Outlander fans, so hang with us! E! is airing red carpet coverage, but our A-list stars won’t be walking the red carpet until 6 p.m. or later. [4:50 pm] Getting back to Anne’s awesome post, any guesses as to what color Caitriona will wear? My friends here say black, I’m going a lovely green (wink wink, Ireland). [4:55 pm] Folks, our leading man is battling illness.  Apparently even that body can be riddled with fever.  Here’s hoping some champagne does the trick!

[5:05 pm] We love the Outlander SoCal gals! According to the AP….
In the uncovered bleachers, a group of about 40 fans of the TV series “Outlander” gathered — a few in costume — to catch a glimpse and root for the cast and crew of the Starz series.

“We apologize in advance if we’re loud and obnoxious,” said Leona Barad told to the rest of the crowd in the bleachers.

Barad coordinated with dozens of other “Outlander” fans on Facebook for the group to sit among the audience overlooking the awards show entrance. When cameras from E! panned across the crowd, they screamed “OUTLANDER!” in unison. [5:20 pm] Brace yourself, folks – they’re in the car! Mama bear, Papa Bear and the fabulous Maril Davis are en route to the Golden Globes. 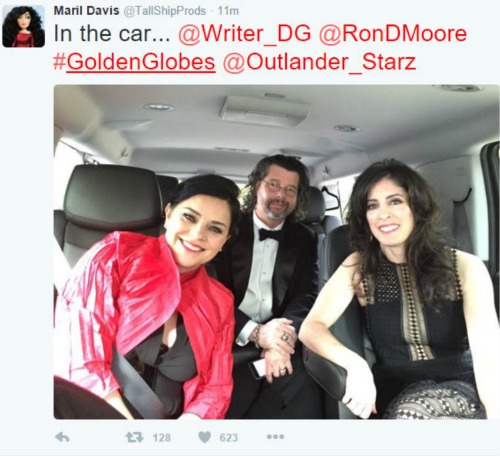 [5:35 pm] These folks.  Accountants all dolled up, smirking with all the answers to who wins. They know. They knoooooooooow. 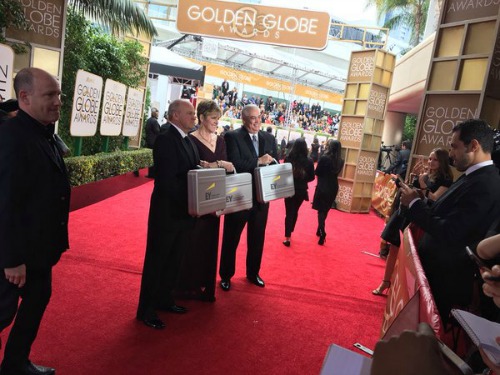 [5:55 pm] Our leading lady has arrived.  Stay tuned for a red carpet photo…

[6:00 pm] E! Online has done a changing of the Golden Globes guard – Ross Matthews out, Ryan Seacrest in. [6:05 pm] After a four-year break, Ricky Gervais is back as host.  I will miss the magical duo of Tina Fey and Amy Poehler (who fantastically held their own for three years), but am excited to see what controversial funnies the pint-toting Gervais will serve up. [6:17 pm] In case you hadn’t seen, our power trio of Outlander creators is looking mighty snazzy tonight! 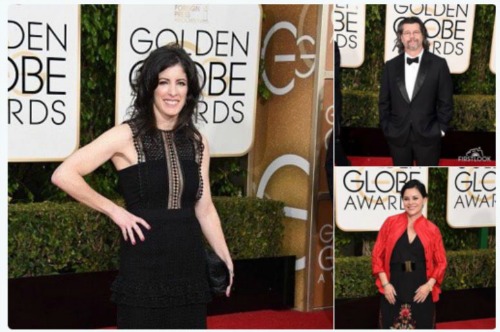 [6:23] So Ross Matthews isn’t really gone, and we’re glad… because he just gave a wonderful shout out to Caitriona Balfe, and to Outlander fans for their frenzied enthusiasm on Twitter and in the bleachers.  He is just as giddily anxious as us to see what Caitriona will wear.  Again, thank you SoCal! [6:35 pm] Apparently green is a hit this year since several stars have shown up in jewel tones. Special kudos though to our favorite E! correspondent and die-hard Outlander fan, Kristin Dos Santos, for wearing green for all the right reasons. 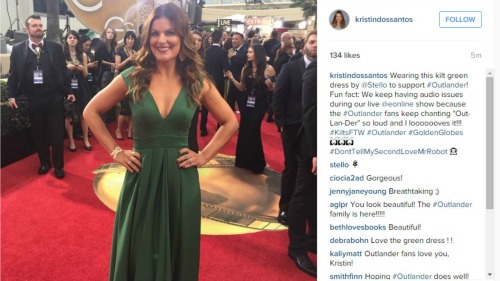 [6:40 pm] Outlander SoCal – you do us proud.  Apparently you’re screwing with the E! live feed audio with your shouts of “Out-lan-der”, and we’re perfectly okay with that. 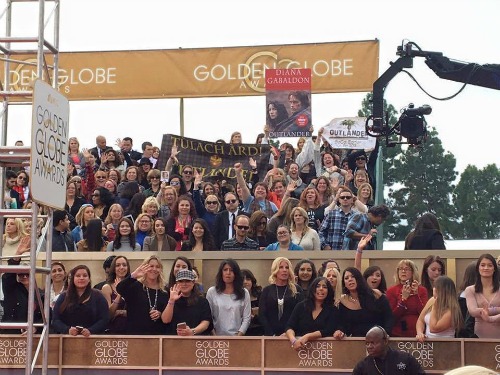 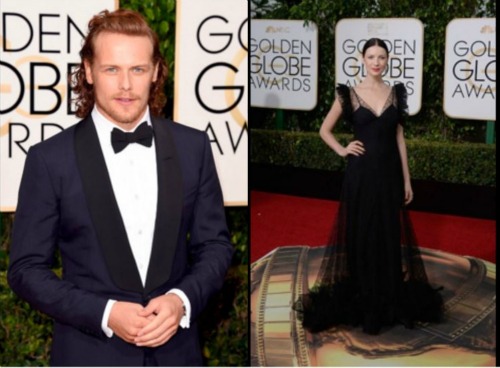 [7:10 pm] Caption this photo below.  There might be a prize involved for the favorite. 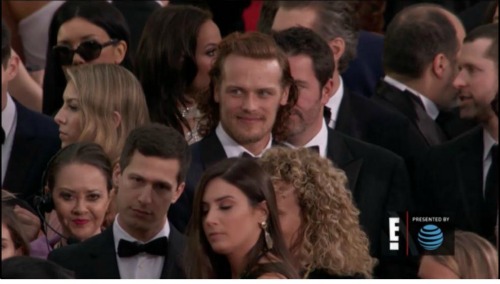 [7:24] Not to be outdone, the lovely Tobias Menzies looks… well, lovely. 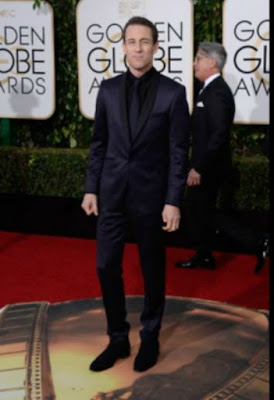 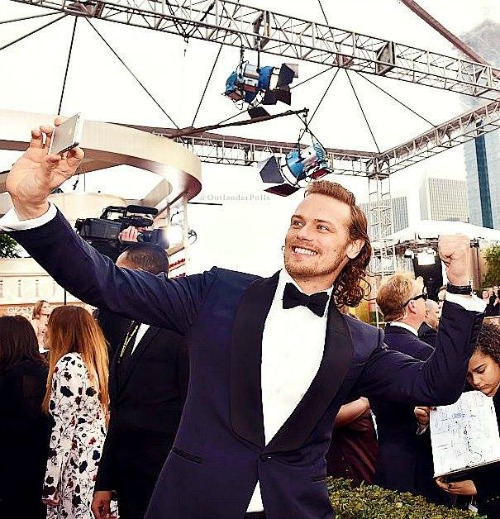 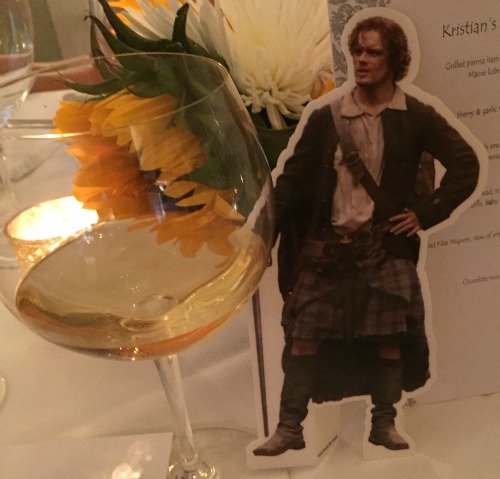 [8:20 pm] For those craning their necks to find our Outlander folks, most TV shows are seated on the second level – the rowdy level. [8:27 pm] Awards update: Rachel Bloom, Best Supporting Actress in a TV Comedy or Musical (My Crazy Ex Girlfriend) and Best TV Comedy or Musical goes to Mozart in the Jungle. Coincidentally, that’s my next TV binge so I’m glad to know it’ll be time well spent. [8:30 pm] In case you aren’t watching, we have the Honest Toddler blog to thank for aptly summing it up, “Ricky Gervais seems like the only person there not on powerful sedatives.” [8:40 pm] Awards update: Wolf Hall wins Best Mini-Series or Motion Picture Made for Television and Oscar Isaac won Best Actor in a TV Movie or Miniseries for Show Me A Hero. [8:50 pm] Well, damn. That’s as eloquently as we can sum up Christian Slater (Mr. Robot) winning Best Supporting Actor over our dashing Tobias Menzies. [9:00 pm] Tobias, you’re always a winner to us – all day, every day and twice on Golden Globes Sunday. 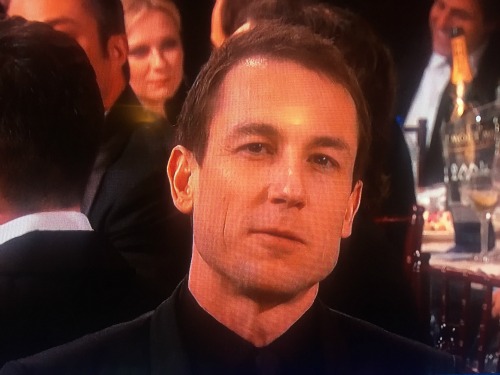 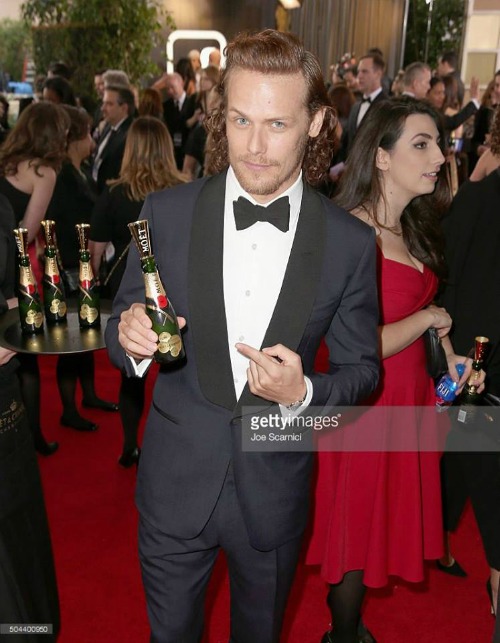 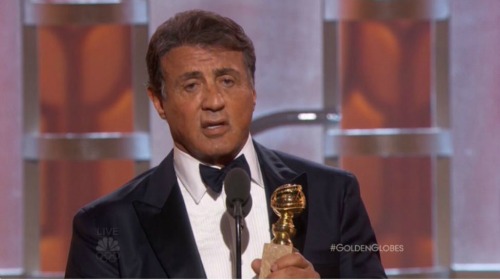 [9:59 pm] Mr. Robot for the win (Best TV Drama).  Chin up, Outlander lovers – a nomination alone does WONDERS for the show.  Here’s to next year! [10:10 pm] They say adult coloring books are the best new form of therapy.  We dove right in. 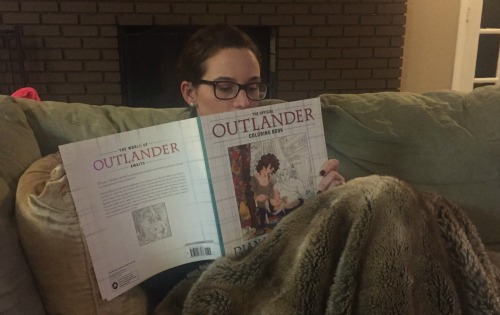 [10:17 pm] Getting sleepy? Time for a gratuitous eye candy break! Sam landed on E!’s list of Best Dressed Men at the Golden Globes. We know, shocker. [10:30 pm] Sigh. Here’s to being nominated for a Golden Globe for a show in its freshman season after only 5 or 6 acting credits to your name.  You and your million-watt smile are gold to us, Caitriona. 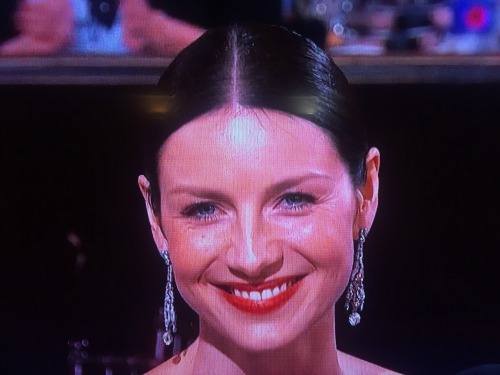 [11:03 am] We might have gone to bed, but our stars partied into the wee hours… even donning a wardrobe change for the InStyle After Party! 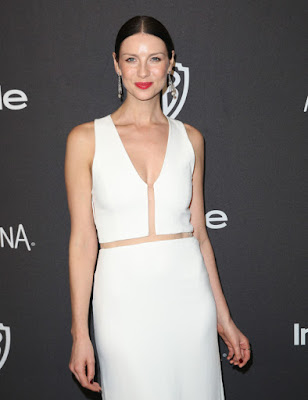 [2:00 pm] Did anyone wake up in still in the red carpet glow of seeing our gorgeous stars decked out? If you didn’t, change your tune.  This should help.

Here’s our #GoldenGlobes gift to you, @Outlander_Starz fans: @SamHeughan‘s pose for the E! Glambot ???? pic.twitter.com/yshzGAFggl

Refresh often and join in the conversation here and on Twitter!