A Curious look at Outlander’s Master Raymond: Who is this guy? *SPOILER WARNING*

By now we have all — maybe — stopped weeping over episode 7 of Outlander. The script, the set, the ACTING — “Faith” was the episode where season two finally came together in one glorious hour of outstanding television. Move over “The Wedding.” “Faith” may supersede you for fan rewatching.

This is the also the episode where, barring Ron D. Moore et al losing their collective minds, we bade farewell to the enigmatic Master Raymond. Like the man himself, his screen minutes may have been small, but he figures large in Claire’s life and, ultimately, in the way history plays out.

We first meet Master Raymond (so wonderfully portrayed by Dominique Pinon) in episode 2, “We’re not in Scotland Anymore.” Claire comes to his apothecary seeking a potion to help Jamie sleep. (Important side note here: The sets this season overall have been mind-blowingly beautiful and impressive. But set designer Jon Gary Steele really takes it to another level with the apothecary and later the Star Chamber in “Faith.” Wow.)

“I see your nose is not purely decorative,” Master Raymond says to Claire after she picks up a vial, sniffs, and announces its contents. The scene also sets up their friendship. Claire is out of her element in Paris and she has made a serious enemy in the Comte St. Germain. After Master Raymond mentions that he and the Comte are rivals, he says, “And since he’s your enemy as well, you must in point of fact be my friend.”

Master Raymond turns out to be perhaps the friend for Claire. Yes, Louise comes through in that beautifully touching scene at Claire’s bedside, but before that she is more frill than substance. And Mother Hildegard is both demanding mentor and, ultimately, mother as well as friend. But Master Raymond is an instant soulmate — an herbalist and a healer of sorts (healing has its dark antithesis in poison of course). You can almost see Claire’s guard fall away as she first wanders into his shop. She smiles as she watches him roll along the shelves in his shop, gathering up herbs to help Jamie sleep. She is at home for the first time since she’s stepped foot on French soil.

If ever Claire needed a friend, it’s in Paris — a city of deception and intrigue and a place in which both she and Jamie are totally out of place. Their entire lifestyle is a metaphor for falsehood, from the albeit beautiful but extremely ornate, constricting clothing and unfamiliar social mores to the halls they skulk around. They navigate because they must but they are mostly miserable doing it. Master Raymond is Claire’s anchor in this roiling sea. 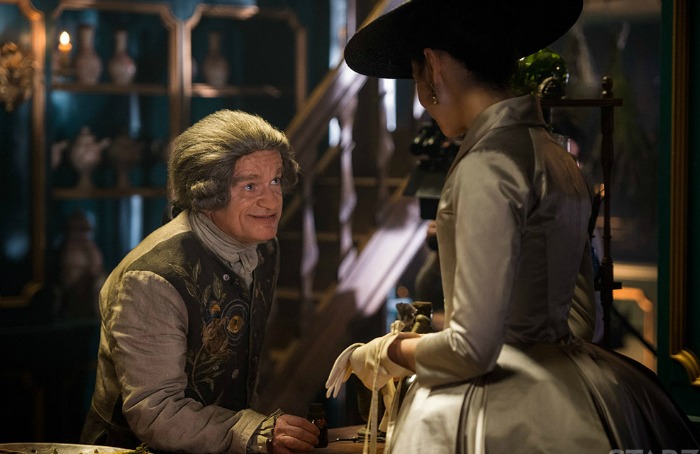 Their friendship is sealed further in the gut-wrenching hospital healing scene, in which Master Raymond risks all to help save his friend. “What do you see, Madonna?” he asks as he places his hands on her face. Blue wings, she says. “Blue is the color of healing. The wings will carry your pain away if you let them,” he says, beginning to move his hands slowly down her body.

Master Raymond understands that emotions can be as damaging as bacteria, that anger and hatred can keep us from getting well; these emotions can literally block us. “Call him,” he tells Claire. “Call to him.” And Claire, initially reluctant, finally pushes Jamie’s name out of her clenched teeth as the piece of placenta killing her is expelled from her womb. The healing, literally and figuratively, can begin. (Interesting not coincidental side note: Blue is also the color of the throat chakra. In Indian thought, the chakras are the centers of spiritual power in the body. The throat chakra is how we express ourselves, enabling us to carry power with our words when it is open and stifling our true selves when it is not. Claire’s clenched screaming showed her literally releasing herself. Never one to hold back her thoughts before, she was killing herself metaphorically by not speaking what needed to be spoken, with the final cleansing coming in her admission of her feelings of guilt at the episode’s end.)

This scene also shows us more of Claire’s potential power to heal. Master Raymond hints, through his own healing hands, that Claire is more powerful than she even realizes. After he calls her Madonna again and Claire dismisses the moniker. “I am not Madonna. I have no child.” “I call you Madonna not because you were with child,” he says. “Everyone has a color about them. Yours is blue like the virgin’s cloak, like my own.” Master Raymond is hinting that they are more tied to each other than Claire can see at this moment.

That other unifying force, of course, is that they are both time travelers,  something Master Raymond clearly knows but about which Claire, oddly, uncharacteristically, is oblivious.

Master Raymond’s time-traveling abilities help make it clear that Geillis Duncan was not a one-off, something book readers know but that needs set-up for those who are TV-only Outlander fans. In episode 4, “La Dame Blanche,” someone tries to poison Claire. She comes to Master Raymond with a pretty good idea of who that person was, asking if he sold poison to the Comte. Master Raymond tells her about bitter cascara (handy tip it turns out) and takes her into his inner sanctum. 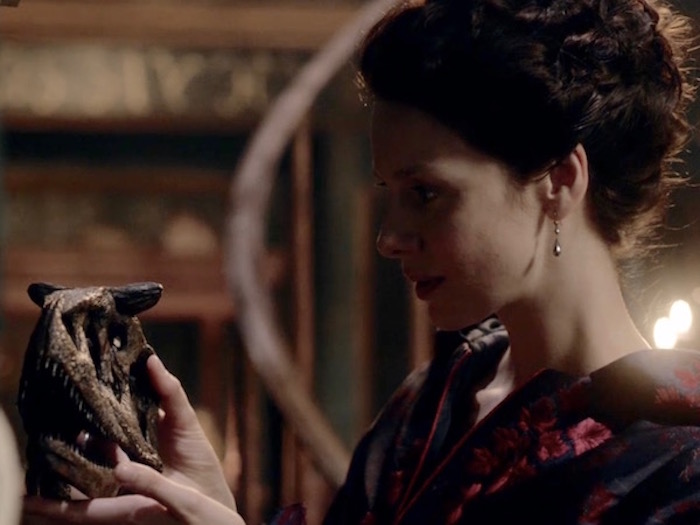 By the time this visit is over, it’s clear to everyone but Claire apparently that Master Raymond is a time traveler. “I’m fascinated by things that are not of this time,” he says with a knowing look as she studies an obviously prehistoric fish skull. This skull is no arbitrary prop. As obsessive regular Diana Gabaldon website followers know, 18th century Paris is not Master Raymond’s first stint on this earth. Gabaldon has written that he’s a prehistoric time traveler. “I think he came from somewhere about 400 BC or perhaps a bit earlier (not technically ‘prehistoric,’ but they certainly weren’t using written records where he started out) and the 18th century is not his first stop.”

Oddly, Claire, normally so intuitive, seems oblivious to Master Raymond’s’ time-traveling hints. She clearly thinks he’s more than a straightforward herbalist; why else would she tell him she’s concerned about Frank’s future? Master Raymond whips out the sheep bones to provide an answer at which point Claire launches into a story about how she saw the Zulus use bones like these while traveling with her Uncle Lamb in Africa. This is a completely unguarded observation by Claire, a woman who’s been on guard since stepping through the stones. It’s also a totally out of time comment. An 18th century woman child traveling in Africa with her archeologist uncle? Wha? Does Claire’s frankness suggest she understands Master Raymond’s past but it’s not going to, for some strange reason, be more of a plot reveal? Or is she really, as the treatment suggests, unaware?

But while Claire appears blind to Master Raymond’s time traveling abilities, we are not. For any viewers still in the dark, the point is solidified in episode 6, when she warns him of the king’s plans for those who practice the black arts and he tells her he will see her again, either in this lifetime or another.

Claire and Master Raymond’s friendship reaches its climax moment in the Star Chamber scene, where Master Raymond ultimately saves Claire’s life for the second time — and his own obviously — by poisoning the Comte. They unify for the first time in their healing powers and what a power it is. Claire has no choice other than to use her abilities for evil, carrying the poison Master Raymond has placed in the cup to the Comte. While she despises him, she has never actively killed someone with her herbs. And yet, she knows she must do this to save herself and, ultimately, Jamie.

As Master Raymond is lead out of the room, Claire says in a voiceover, “I’m going to miss you most of all.” While this voiceover seemed jarring to me, The Wizard of Oz reference (the second in the series; who can name the first? Leave your guess in the comments) is at least relevant. This is what Dorothy says to the Scarecrow when she is returning to Kansas, when she’s going home. Claire believes she has fulfilled her payment to the king (oops, not quite) and that she and Jamie will finally be able to return home to Scotland. And she loves the Scarecrow best because he has brains.

And so the mysterious Master Raymond leaves France. The thing about time travelers, though, is you never know where they’ll show up next. Or where they’ve been before. Is Master Raymond’s recognition of Claire only because he sees her aura or have they been together at another point in time? Gabaldon gives a few hints on her website:

“He is–or was–a shaman, born with the ability to heal through empathy. He sees auras plainly; those with his power all have the blue light he has–born warriors, on the other hand, are red (so yes, “the red man” is iconic). He has a rather strong aversion to Vikings, owing to events that happened in his own time; hence his nervousness when he sees Jamie. He’s afraid of them, but he also realizes just what a strong life-force they have–that’s why he makes Claire invoke it (using the sexual and emotional link between her and Jamie) to heal her.

His descendants–a few of whom he meets now and then in his travels–have the blue light about them, too; in large degree or small, depending on their talents. So he knows Claire, when he sees her, as one of his great-great, etc. grand-daughters. And Gillian/Geillis is another–you notice she has Claire’s sense of plants, though she tends naturally to poison, rather than medicines.
We’ll see him again–though not in Jamie and Claire’s story, I don’t think. Master Raymond should get his own series of books, eventually.  So in fact, we’ll see Claire, Jamie, and Geillis again, then– but as secondary characters in Master Raymond’s story.”
We, of course, ALL hope Gabaldon turns to this story after she has finished the Outlander series. I will add this one final note: If you want to know more about the past relationship of the Comte and Master Raymond, read her novella (available only as an e-book) called The Space Between. I guarantee you’ll be surprised.

As to what happens with Claire and Master Raymond down the road, only time will tell.