Battle of the Brothers: Brotherly love in Outlander episode 212

Leon Tolstoy wrote famously in Anna Karenina “Happy families are all alike; every unhappy family is unhappy in its own way.” We saw this in spades in the Outlander season 2 episode, “The Hail Mary,” where we have the Battle of the Brothers on the eve of the Culloden Moor disaster. In one corner, we have Alex Randall and his brother, Jonathan Wolverton Randall aka BJR, and in the other, the McKenzie brothers, Colum and Dougal, who have been going at it one way or the other since season one. Each sets the tone in different ways for a finale of heartbreak.


The title, “The Hail Mary,” is not a coincidence. At this point, three days from Culloden, Jamie, Claire and Murtagh are desperate. Every time they think they’ve got fate licked, something happens to thwart their attempts. The Hail Mary, for those who are not Catholic, is a prayer and an apt one given where we are in the story arc. “Hail Mary full of Grace, the Lord is with thee. Blessed are thou among women and blessed is the fruit of thy womb Jesus. Holy Mary Mother of God, pray for us sinners now and at the hour of our death.” (Luke 1: 26-38 if you’re interested) Almost every one of the main characters in Outlander has at least one sin for which they’d like absolution upon death — and there are many characters who know death is on their doorstep.

A Hail Mary is also, weirdly, an American football (not soccer) term. It describes a very long, typically unsuccessful, pass made in a desperate attempt to score late in the game. Sometimes they work; mostly they don’t — which is precisely what is happening here. Claire and Jamie have tried countless times and innumerable ways to stop fate, and it’s clear by the end of this episode that fate is going to win.

The male-centric theme of episode 212 kicks off with Rupert and Ross having a bromance moment. (For a blow-by-blow recap of episode 212, check out my colleague, Ashley Crawley’s always insightful and humorous blog post.) Both, played expertly by Grant O’Rourke and Scott Kyle, are in mourning over losing their good friends at Prestonpans. Who isn’t still crying over the surprise death of Angus played by Stephen Walters?  Not surprisingly, they seek solace with each other. They can give each other support without having to actually explain their feelings too deeply because, you know, men don’t like to go there.

The mood now set for exploring male relationships, the episode moves back and forth between the Randall brothers and the McKenzie brothers — interwoven with classic Bonny Prince Charlie moments with his generals and Jamie, who is still trying every which way he can to avoid Culloden.

Side note: Jamie’s face when the prince announces he’s not interested in defeat — this from the man who is so in the dark about the reality of his situation that he literally can’t find his way. So heartbreaking. So many emotions in one split second as Jamie realizes what this means.

The McKenzie brothers have had a troubled relationship the entire time we’ve known them. Colum is the level-headed laird and Dougal is the loose-cannon Jacobite who chafes under his brother’s more measured thinking. By the time Colum comes to Inverness, their relationship is mostly over, thanks in part to their being on opposite sides of the Jacobite cause.

Colum comes to settle clan business and get some help from Claire in committing suicide. “I commend you on such an admirable marriage,” he says when they are alone. “I remember a day,” she replies, “when you found our union less agreeable.” To which Colum says, ” I was wrong. One of the pleasures of dying is I can finally admit my mistakes. It’s also easier to ask for favors.”

Claire initially balks at providing an elixir. “Isn’t suicide a sin?” she asks. “What’s one more sin to a sinner,” Colum says, a phrase that echoes Claire’s comment when she is given last rites after giving birth to Faith. “My sins,” she says, after refusing to confess, “are all I have left.”

Colum and Dougal’s relationship comes to a head when Colum announces that he has chosen Jamie  — not Dougal, Hamish’s actual father — to be Hamish’s guardian until he is old enough to take over as laird. It’s a slap in the face to Dougal. “Do you choose a Fraser over a McKenzie?” Dougal spits at the news.

“He shares our blood,” Colum notes. More importantly, “I am skeptical my support is enough to ensure people will choose you as clan chief when I’m gone.” Then Colum goes for the jugular. “If you’re half as popular as you believe yourself to be then there would be more men here today in this army of yours,” he says. “Has that thought ever crossed your mind?”

Dougal’s not buying it. “This is your last chance for punishing me for the son you could never father,” he says.

But Colum knows Dougal better than he knows himself, a reality that is likely at the heart of some of their bad blood. Jamie, he says, will ultimately put his men’s best interest above and before anything else — even if means sacrificing fighting the English. “Tell me you would do the same,” he says to Dougal. “Say the words, meaning them in your head and in your heart, and the guardianship is yours.”

Long pause, after which Dougal — brilliantly portrayed by Graham McTavish — to his credit looks at Jamie and walks out of the room. He knows Colum is right. “My poor brother,” Colum says to Dougal’s departing figure. “I have lived my life crippled in body. He has lived his crippled in mind.”

Which is part of why they never get along. In his heart Dougal knows that Colum’s way is likely the better choice for the clan, that this has always been the case, but it sticks in his craw. He doesn’t want to believe Colum is right. 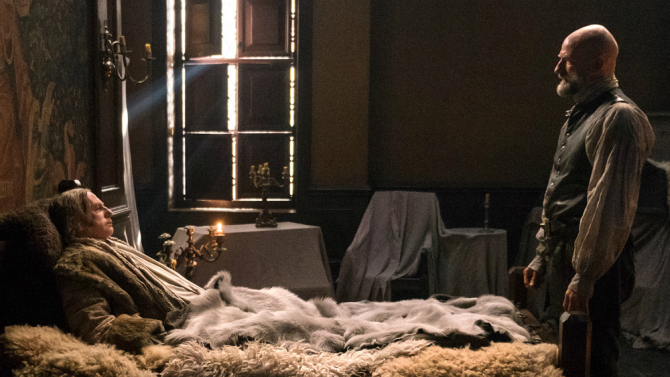 We learn why in their final scene together. Dougal has been drinking and he comes in to a very quiet Colum. “I am beyond any injury you can do to me,” Colum says after Dougal taunts him with a drink. “What about all the pain you’ve put me through in this bitch of a life we’ve shared,” Dougal retorts.

He then launches into his memory of the day everything changed — the day Colum was thrown from his horse and never recovered. Instead of getting better, Colum grew worse and Dougal felt betrayed.

“I watched you every day with your limbs getting more and more twisted. I watched you shrink,” he says. “And I hated you for it … The world was never the same again. You destroyed it.”

Dougal clearly never got over feeling abandoned. The big brother who was going to protect him, lead the way for him, was gone forever and Dougal took it personally from that day forward.

When Colum does not respond to his words, Dougal shakes his head. “No response,” he says. “Damn your soul, answer me.”

He quickly realizes Colum is dead — the final personal blow in Dougal’s eyes, the absolute abandonment. “Oh brother, so you turn your back on me one final time, eh?” he says. “You leave me alone in the dark. And all I hoped to say to you remains trapped in here,” he adds, hitting his forehead. “Right here — unsaid.” 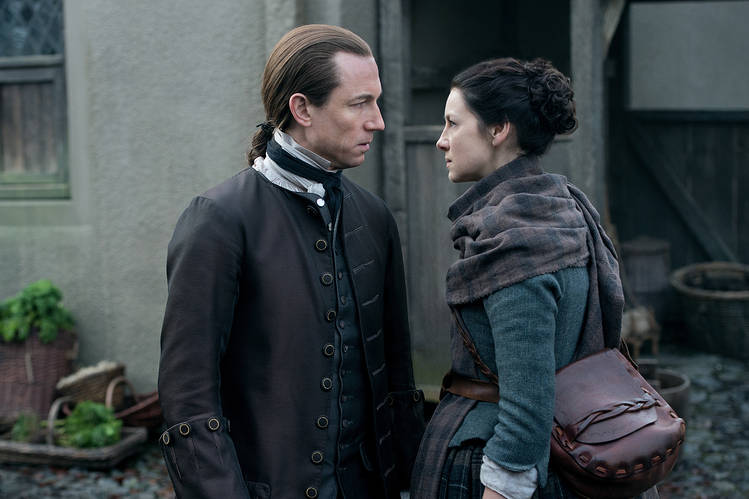 Interestingly, hitting, although obviously with a twist, occurs in the resolution of the Alex Randall/BJR relationship. Alex knows he’s dying. And he knows that while his brother, who has been supporting him and Mary for weeks, has said he will continue to ensure that Mary and their child are taken care of after Alex is dead, that the only way he can really be sure that is the case is if Mary becomes BJR’s wife. As his wife, she is guaranteed his money and his position should something happen to him. As his widowed sister-in-law, she is guaranteed nothing.

While BJR is despised by just about everybody, Alex shows us that somewhere in the darkness, albeit hidden very deeply, lies a shard of the ability to love. BJR is so damaged, though, that the only place where he can let that deep secret out, the only person with whom he feels safe enough to reveal even a moment of love, is with his brother, Alex.

BJR also knows that he likely won’t be able to hold it together once Alex is gone, and so he initially refuses Alex’s request that he marry his beloved, Mary. He calls himself a monster. “What kind of God creates a world where monsters survive,” he asks Claire, mostly rhetorically, “but where beauty and purity are rewarded with death.”

The same God that offers redemption, Claire responds. “Have you ever harmed your brother? Perhaps that immunity would extend to those he holds most dear.”

In case we had any doubt of BJR’s deranged soul, he reminds us one more time. (I personally thought it was overkill. We got this message the first time BJR says words like these. No need to repeat IMHO.) “Did he never tell you the things I did to him in that room?” he asks Claire. “I know the sound he makes at the last when he has lost himself and I regret none of it. The pain, the fear, I revel in it. Do you really want Mary in my bed? Help me persuade my brother to give this up.”

But Claire, still desperate to save Frank — whom Murtagh earlier, in what in one of this season’s memorable lines, calls “a mythical prick” — and under the guise of caring for Mary’s future tries one last strategy. “Alex won’t listen to me,” she says, “but you are sending your brother to his grave with a broken heart. If you love Alex, I trust that love is enough to stay your impulses with Mary.”

Any hope that this act of kindness or his brother’s goodness has rubbed off on him, however, is shattered shortly after Alex breathes his last breath. BJR almost cries but catches himself before launching himself at his brother’s inert body to respond in the one way he knows and understands — with anger and physical brute force, striking the dead body repeatedly before walking out of the room.

While both of these storylines include deviations from the book, they serve well as foreshadowing for the final episode. Dougal and BJR are abandoned. Jamie and Claire are going to have to abandon their hopes for changing the future, and lose the very thing that gives them life — their relationship.

“Abandon all hope, ye who enter here,” Dante wrote in The Divine Comedy as the inscription to the entrance of Hell. Seems a fitting parting thought as we prepare for Culloden and all it brings.

What did you think of episode 212?  If you’re a book reader, did you like the ways in which it deviated from the text? If you’re a TV-only viewer, did this work emotionally as a set-up for the finale?