Claire and the Great Blue Heron

A Great Blue Heron appears on the page of a library book and soars in the sky as Episode Seven, “Faith” opens. It had to be more than just a pretty image to fill a space in time, so I searched for characteristics of both the soaring bird and Claire’s earth-bound existence. She tells her daughter that she remembers seeing herons in Scotland. Can the heron be more than a beautiful bird Claire remembers from her 1700’s life? Perhaps the heron is Claire’s totem, or guide.


Great Blue Herons are determined, resourceful, and independent. They’re also shrewd and intelligent. Sounds like Claire, doesn’t it? Herons thrive in earth, air, and water, which speaks to diversity and adaptation. This ability to adapt leads to easing into transitional phases of one’s life. The heron is able to live comfortably in spaces that are transitional (hunting at twilight, a “neither here, nor there” time) and is sometimes seen having one foot in the water and one foot on land. Or, one life in the 1940’s and the other in the 1740’s, if you’re Claire Elizabeth Beauchamp Randall Fraser.
Herons are solitary creatures – Claire travels through the stones alone and keeps the secret of how she came to be in Scotland in the 1700’s to herself for a good, long time. She relies on her intelligence, resourcefulness, and independence to stay alive with and without Jamie.  At the same time, however, this is a reminder to Claire that she cannot always do everything by herself. At some point, she has to rely on others for help and support – Jamie, Master Raymond, and Mother Hildegard have all stepped in when her need was great.
Heron pairs work together to make a home for their young. Claire and Jamie’s first attempt at parenthood is a heart-wrenching disaster. In a soul-baring conversation with Jamie (newly-released from the Bastille), a devastated Claire blames herself for the events that may have contributed to the loss of their daughter, Faith. She doesn’t blame him and she doesn’t even blame Jack Randall (“not this time”) and his eventual ties to Frank. “He (Frank) isn’t here now,” she tells Jamie. And, she went to the woods where the duel was taking place of her own free will.
Master Raymond takes a great risk coming to the hospital, but he saves Claire’s life. As he ministers to her, he asks her what she sees. She tells him the color blue and wings. “Blue is the color of healing,” he tells her. 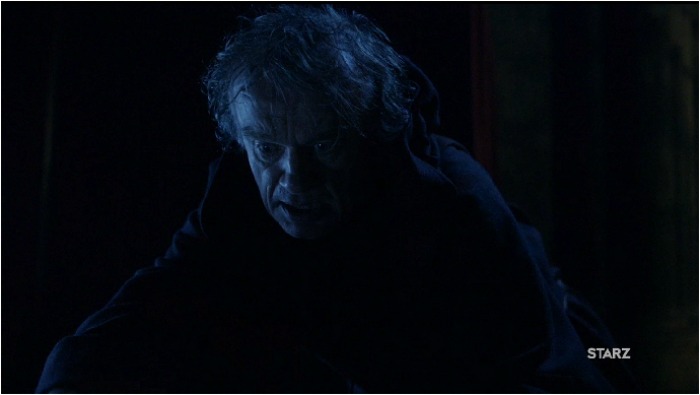 She is bathed in the same blue as the Virgin Mary and Master Raymond – it surrounds them like a cloud, he explains.

Her body healed, Claire finally takes her shattered soul home. Fergus needs her. Jamie is in prison, and Claire is the closest thing he has to a mother. Faith is gone, but Fergus is not. I was reminded of the conversation Reverend Wakefield had with Frank regarding a parent without a child and a child that needs a parent. Fergus carries blue anemones (symbols of mourning) as he bravely exits the coach when he and Claire arrive home from the ‘Hôpital des Anges. 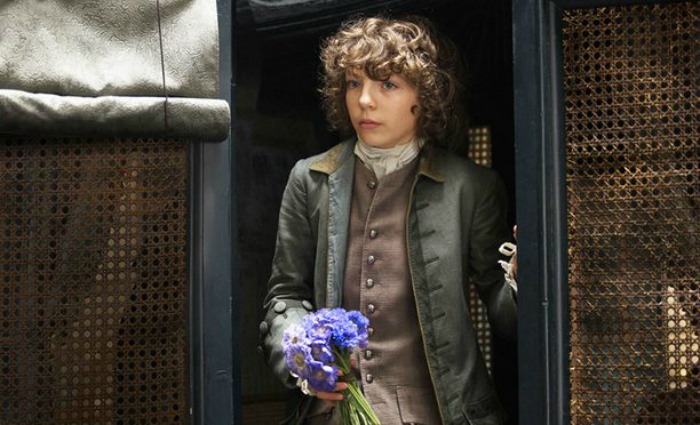 Claire steps down, clad in a blue cloak. Perhaps it’s the blue heron’s calm and grace she draws upon as she makes her way to the servants lined up at the door. (My tears began with Suzette, and the floodgates opened when she spoke with Magnus.) He welcomes her home and begins to bow. She stops him, offers her thanks, and bows to him in gratitude. 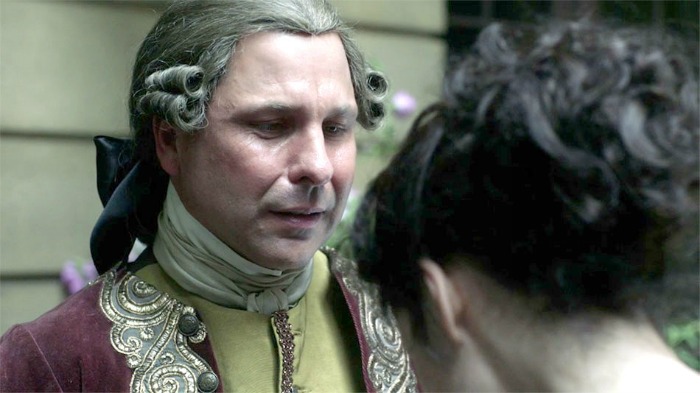 Has Claire had enough? “Take me to Scotland,” she begs Jamie, hoping they can both heal and move forward with their lives, bearing the burdens of what they’ve endured together. One of the traits of those with a Great Blue Heron as their totem is that a strong focus in their life will be establishing and maintaining peace. Will leaving France bring peace to Claire and Jamie while the world around them remains in turmoil? Is peace possible with the Jacobite rebellion looming? I hope Claire’s totem will accompany her back to Scotland and keep a close watch over her.
What other lessons and symbolism can we draw from Claire’s Blue Heron?  Is there a symbol in your experience which brings you strength and comfort?