Outlander’s Claire Fraser: Queen of Women and the Ultimate Badass

James Alexander Malcolm MacKenzie Fraser: King of Men, ovary exploder, giver of smoldering looks, and the one responsible for the shortness of breath among so many Outlander fans. I get it. Book Jamie is hot. Screen Jamie is hot. The man is like a greatest hits reel of women’s dreams around the world. But what about Claire?

If I’m being honest here (and I am, because I’m among friends), I have as much of a crush on Claire as I do on Jamie. She is equal parts damsel in distress, action hero, lover, mother, and healer/surgeon (depending on which century she’s living in). As much as Jamie is the embodiment of the perfect man, Claire, for me, is the embodiment of every woman trying to balance life, love, career, family and doing so with a wicked tongue. Like all of us modern ladies, she doesn’t always get it right and she occasionally mucks it up terribly. And like us, she wakes up every day and tries once again. What follows are my favorite examples of Claire being the ultimate badass. Let’s see if you agree.

Setting Jamie’s Shoulder and Bossing Around the Boys
Minutes after going through the stones and arriving in 1743, Claire is nearly raped by Black Jack Randall and then “rescued” by Murtagh, who knocks her over the head to silence her. It wasn’t the best of days. Murtagh takes her to a cottage where she finds the men of Clan MacKenzie gathered around Jamie, who is in pain with a nastily dislocated shoulder. Even though she’s still trying to convince herself that she hasn’t fallen through time, Claire puts her personal crisis aside and tends to Jamie’s shoulder. Her training and experience as a combat nurse take over and she immediately begins shouting orders to the MacKenzie clansmen. If Claire had not intervened, it’s likely that Angus would have broken Jamie’s arm with whatever barbaric technique he was about to employ. No matter what was going on in her own life, Claire couldn’t let this stranger be maimed for the rest of his. Later on the road, when Claire tends to Jamie’s gunshot wound, she rips her own barely-there dress when she realizes that there are no bandages. 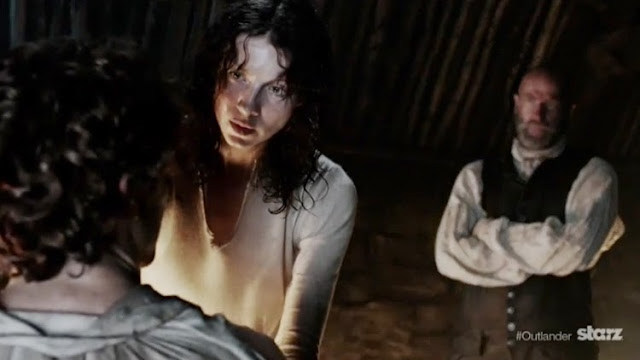 I love these moments because they exemplify what we ladies do every day. We’re stressed, we’re juggling ten different personal and professional crises at the same time and then, in a moment of clarity, we know exactly what we need to do next and we handle it. We don’t wait for permission; we don’t wait for a more opportune time. We do it right then because it’s what matters most at that moment. We take care of business and then get on with our day. Fortunately for us, that typically does not include trying to locate the husband we left in the future.

Choosing Not to Go Through the Stones
Once Jamie found out the truth about Claire and where she came from, he decided to take her back to the stones so that she could return to the relative safety of her own time. Standing in front of the stone, alone, Claire only had to reach out and touch it and she would have been transported back to her own time — back to Frank, the husband who loved her and who was searching desperately for her. Yet, she didn’t.

How many times have we been afraid to make the leap, to let go of a mediocre thing for a great thing? Claire’s story is a reminder that it’s not only okay to choose something better, but sometimes we have more fulfilling lives because we take the chance.

I’m a fan of all the sex scenes in Outlander for all the reasons that blogging colleague Janet Reynolds has already covered. We are of the same mind on this topic. The wedding scene is something special though, and here’s why. Jamie and Claire spend the night talking, drinking, and building sexual tension. As Janet says, we watch them fall in love. This is familiar territory to Claire, but it’s all new to Jamie and, in typical rookie fashion, he fumbles his way through it the first time. And, like a boss, Claire lets him. She lets him do what he needs to do to make the marriage legal, to stop the nosing about of the clansmen, and to release 23 years of sexual frustration. And then, she gives him the gift of an older, more experienced woman. Claire is in complete control. She asks Jamie to undress, she takes her time admiring his body (she’s not the only one), she demonstrates that the act is something that they can both enjoy, and then she does the thing that makes him feel like his heart is going to explode. 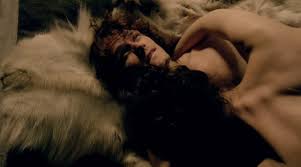 Here’s to Claire for reminding us that sometimes we need to refocus some of our control issues into the bedroom. Our guys will thank us for it and maybe, if we’re lucky, they’ll fall asleep with that adorable smile on their faces.

The Slap Heard Around the Highlands
When Claire finds herself married to the most eligible bachelor in Castle Leoch (sorry Angus!), she wasn’t quite prepared for the backlash from the woman who desperately wanted Jamie’s love and attention. On her mission to prove that hell, indeed, hath no fury like a woman scorned, Laoghaire goes to the local witch and orders up an ill-wish that would bring death and/or pestilence to Claire.

Upon finding the ill-wish, Claire confronts Laoghaire and, much to her credit, tries to reason with her. Laoghaire isn’t having it though, and reasserts her claim on Jamie. Claire reaches a point where she can no longer deal with the nonsense and she does what we have all been waiting for (you know you were) – she slaps Laoghaire across the face leaving the little vixen speechless. When I saw this the first time, I literally laughed out loud, which is not something I do very often when I’m watching television by myself. I still laugh every time I watch the scene.

How many times have you just wanted to smack some sense into someone? We don’t do it because battery and assault are real things and punishable by law but, seriously, how satisfying was it to see Laoghaire get what she deserved?

Getting Jamie Out of Prison by Sleeping with the King
After his duel with Black Jack Randall, Jamie is taken to the Bastille. Claire is taken to the hospital where she delivers Faith, stillborn. After recuperating from the delivery, Claire returns to cousin Jared’s house where she awaits Jamie’s return, simmering in that self-righteous stew that we all plunge ourselves into from time to time. The man had one simple job – don’t kill Black Jack Randall for one year (and within that the assumption that he would not render him unable to father a child) and he couldn’t even restrain himself for a few weeks! Then one night Fergus has a nightmare and, in comforting him, Claire learns the awful truth about the moments preceding the duel. The knowledge that Jamie was acting in defense of Wee Fergus breaks Claire’s heart anew and she knows that she must actively petition for his release.

As ever, Claire devises a plan and this one ain’t pretty. Mother Hildegard tells Claire that the king sometimes grants petitions such as Claire’s, but that he might expect to lie with her in return. Gathering up her wits and her voluminous skirts, Claire makes a call on King Louis. After drinking chocolate and light conversation, Claire indicates that she would be most grateful (wink) if the king would arrange for Jamie’s release. The king agrees to the request if Claire will grant him a favor. Not in a position to make counter-offers, Claire agrees. The favor turns out to involve a trial of sorts, which leads to the death of the Comte St. Germain. Trial over, the king ushers Claire back to his chamber where Claire “pays” for Jamie’s release in a sexual encounter that closely resembles a business transaction. The king releases Claire and assures her that he will free Jamie from the Bastille. 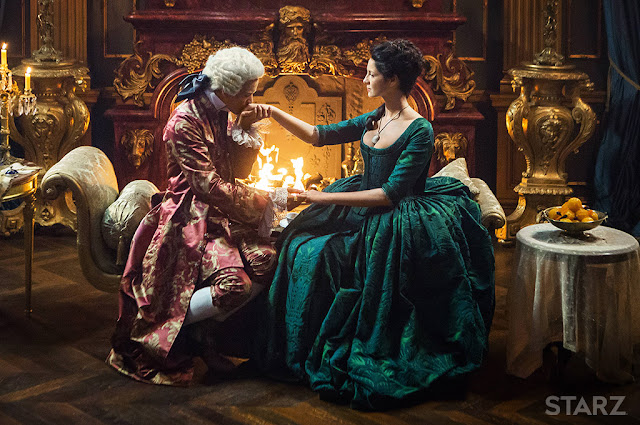 Yes, Claire had to do a couple of pretty unseemly things here, but she went to the king knowing what would happen. Ok, she didn’t realize that she would have to kill the Comte; that was just a terrible bonus. The bottom line is that Claire, being her badass self, sacrifices her body in order to save Jamie. I really don’t want to think about modern-day equivalents on this scenario so I’ll just let this one lie, as it were.

Am I not Lady Broch Tuarach?
The Bonnie Prince sends the Lallybroch men to Inverness to secure winter quarters for the army. On their way, they come under attack by the British and Rupert takes a musket ball to the eye. The Highlanders take refuge in a church so that Claire can remove the ball and save Rupert’s life. The British troops find them and threaten to burn down the church if the group doesn’t surrender. Jamie, being Jamie, wants to give himself up to save the group, but Dougal reminds him that if he goes with the British they will certainly kill him.

Taking matters into her own hands, Claire calls out to the British soldiers and says that she is being held captive. She offers to give herself up to save the men. Jamie protests but Murtagh agrees that it is the only way. The British troops won’t harm Claire and they can eventually find and free her. Jamie says that he will not let Claire give herself up to the British. Clearly fed up with the “stubborn Scot” Claire causes all the men’s jaws to drop open when she exclaims, “Am I not Lady Broch Tuarach? Are these men not my responsibility too?” Jamie, looking  defeated, agrees that it is the only way and begins to prepare for Claire’s departure. As Claire leaves Jamie’s arms she says to him, “We will find each other. Trust in that.”

I love this scene because while the British troops think they are saving the damsel in distress, the distressed damsel has actually outsmarted them and saved the lives of her clansmen. But that’s not all. Claire’s declaration is an acknowledgement of her title and position and her willingness to share its weighty mantle with Jamie. In this moment, she demands equality and the men are helpless to do anything other than grant it. But wait, there’s more! Claire’s reassurance to Jamie as she leaves the cottage shows us a Claire who is, in that moment, far stronger than Jamie. She becomes the warrior offering up reassurance before departing for the battlefield.

If I had to pick one single scene from both seasons as a favorite this would be the one because so much changes with those eight little words.

What’s your favorite Claire badass moment? Do you have a crush on Claire, too?