“In Case You Missed It”: Outlander News Round-Up – #Droughtlander Edition

I forget sometimes that people have lives and may not be scouring the internet 24/7 for Outlander news and announcements.  At the Outlander Cast Blog, however, we LIVE, BREATHE, SLEEP and EAT Outlander – all day, every day and are generally up-to-speed on the latest happenings.  So, periodically we’ll be doing a news roundup for our readers so you can digest all the news you may have missed in one glorious place – on the Outlander Cast Blog!  And, in fact, in recent weeks news has definitely picked up since Season 2 sadly came to end with its dramatic finale.  Read on past the jump for a comprehensive recap of all the latest Outlander news and happenings, including some reports from the set of the Season 3 production!

Season 3 – In Production!
We got wind a few weeks ago that production and filming would officially start mid-to-late August after Sam Heughan and a few others close to the production posted news to this effect on social media.  It also appeared last week that while Sam was apparently getting some makeup testing done (perhaps for a bloody battle scene at the Battle of Culloden?) he was simultaneously signing soon-to-be-released Outlander trading cards – more on that excitement later!

What we do know now is that shortly after Season 2 wrapped production, the Outlander team went to work on Season 3, breaking scripts and scouting locations.  It would seem that while the rest of us were in the dark, Outlander honchos had it on pretty good authority that the network would renew the series.  So, they quietly got started.  It might explain why everyone’s behind-the-scenes social media darling and Outlander producer and writer, Matthew B. Roberts, has been missing in action online for the past couple of months.  It would seem Matt has been in Scotland prepping for Season 3.  Let’s hope the earlier start means a shorter #Droughtlander.

Sorry for the absence But was prepping for S3 @Outlander_STARZ #Outlander #Voyager #action #soitbegins pic.twitter.com/w0sxDCRX3m

But, thankfully, Emmy-nominated Set Designer Jon Gary Steele has stepped in to fill Matt’s very big shoes on social media and has been generously peppering the Interwebs with fabulous and mysterious behind-the-scenes photos of sets and production paraphernalia for Season 3.  Has Jon Gary Steele become the new social media doyen of Outlander’s many crazed fans?  I don’t know the answer to that, but I can tell you he is killing me softly with all his posts including one that – if you look hard enough – may just be the makings of an 18th Century Edinburgh PRINT SHOP!  Be still my heart!

Well, the weekend of Aug. 20, it did start. Table-reads of scripts (presumably for the first block of episodes) started Friday and Saturday, as a photo of Catriona Balfe and Tobias Menzies at Outlander’s Cumbernauld studios went viral on Outlander sites the world over, igniting the “Frank Debate” all over again!  And then, Sam Heughan was on set Sunday filming and apparently working a very hard (and long) day. 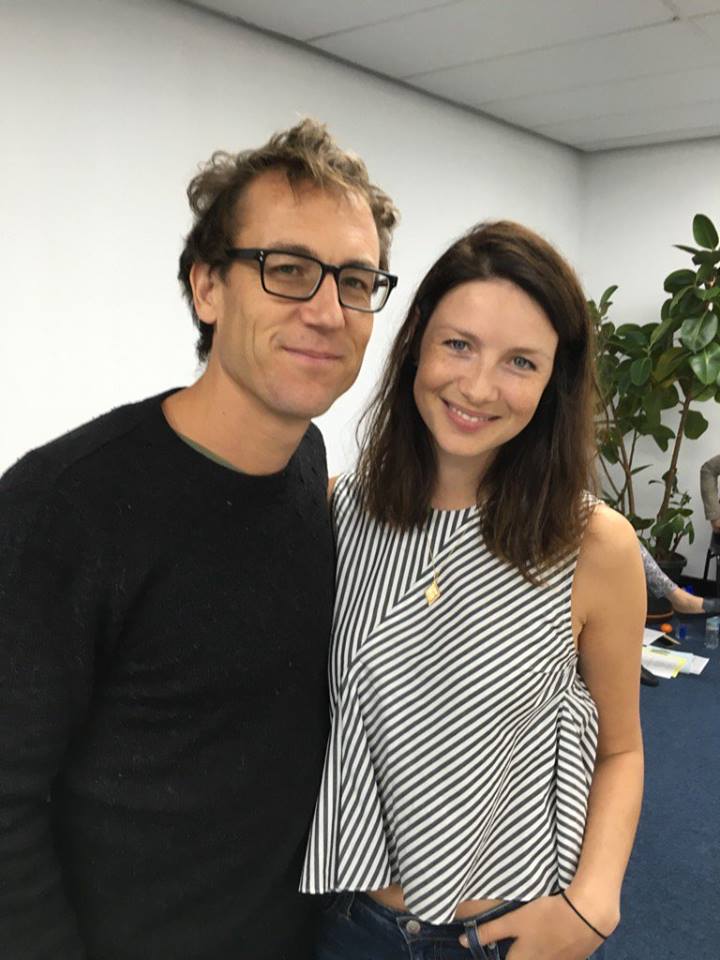 Ron Moore’s producing partner extraordinaire, Maril Davis, was also on set reveling in her return to Scottish mud.  OK, Maril – we get it and we love Scottish mud too – just like Murtagh!  So much better than the asses, armpits and chamber pots of Paris.

An indication of what the day holds… @Outlander_STARZ #S3 pic.twitter.com/NVHDtRSq6k

Voyager Read-Alongs and The CASTIES Awards Poll
As we all breathe a collective sigh of relief that Season 3 production is well underway, others are finding ways to beat the Drought[lander]. Several Outlander blogs and podcasts have begun Read-Alongs of “Voyager,” Diana Gabaldon’s third novel in her series and upon which Season 3 of the STARZ series is based.

At the Outlander Cast Blog, we are very happy to support and promote fellow Outlander Facebook sites, blogs and podcasts – just because we are nice people and Outlander Love is Outlander Love. And, all we need is love…

And, while we are at it, the Outlander Cast Blog has its own cure for #Droughtlander.  We are now LIVE with the first-ever fan awards for Outlander Season 2 – THE CASTIES.  Vote for your favorite dramatic scene, funniest moment, most intimate Jamie and Claire moment, saddest scene or the WTF award for most curious of out-of-place and/or missing scene. . . plus a whole lot more fun categories! It’s a blast re-living Season 2 through the poll and, frankly, there are some tough decisions to be made as your choice in each category. Winners will be announced in September.  So, forget the Emmy snub (as we wrote about on the blog after last year’s Emmys – here and here) and VOTE here for the Outlander CASTIES!

Emmys 2017 (no, it’s not too soon to go there)
While we are on the topic of the Emmys – it was learned recently that Game of Thrones will be taking next year off from the Emmy Awards, due to the fact that next year’s seven-episode season won’t premiere in time to compete in the 2017 Emmy Awards (Outlander Cast Blog did our best to explain the complicated Emmy nominating system.  Read it and weep.).  Oh, darn.  But, the good news for Outlander is that it might be logical to assume that our favorite show may benefit from all those open acting and production awards – Game of Thrones was nominated for 23 Emmys this year! Everything from Best Drama to Best Cinematography and Best Editing and almost all Supporting Acting Awards.  This bodes well for Tobias Menzies, who might be able to take one of the open slots left behind next year by Peter Dinklage or Kit Harrington, both nominated in the Supporting Actor category.

Every new season brings the release of more fun Outlander merchandise.  Season 1 brought us the Pop-Funko dolls and some official Mackenzie and Fraser tartan clothing items.  Granted, it’s been a little bit on the quiet side post-Season 2 thus far, although many may not know that there will be a set of Outlander Trading Cards coming our way very soon.

Cryptozoic Entertainment is producing the cards, which has a base set of 72 cards featuring episodic images from Outlander Season 1.  The really exciting thing is that there will be randomly inserted cards autographed by the stars of Outlander, including Sam Heughan and Caitriona Balfe (see above tweet).  Other stars like Graham McTavish (Dougal MacKenzie) and Lotte Verbeek (Geillis Duncan) have also posted photos on social media signing various cards to prep for the release of the Trading Card sets. There will also be cards featuring various quotes from characters in Season 1 episodes.  It definitely could be fun to trade the autographed cards amongst fans.  If you want to order, there are several online vendors who are taking Pre-Sale orders.  Cards won’t be released until Oct. 31. 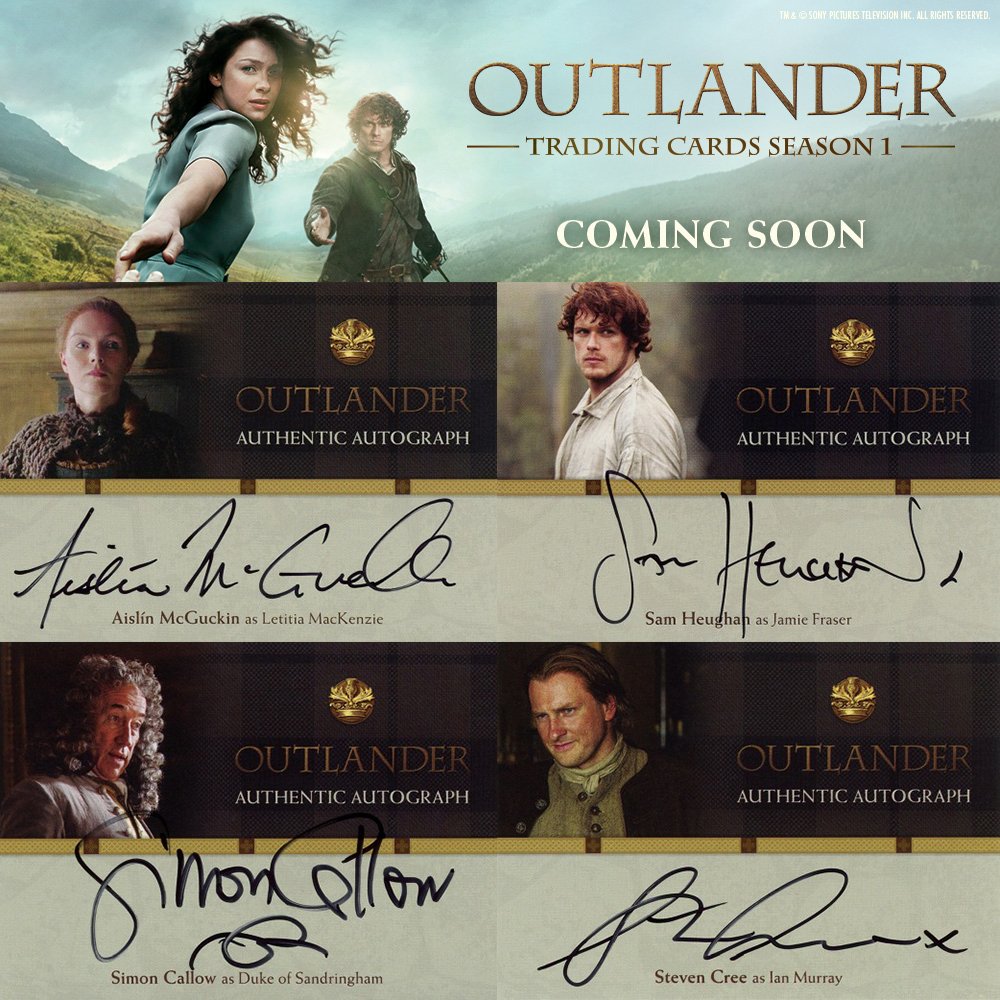 Another greatly anticipated October release is the Outlander Season 2 Collector’s Edition Blu-ray Box Set.  The set went on pre-sale on Amazon several weeks ago, but won’t be sent out until late October. But, if you want to pre-order now, you can do so on Amazon.

Also, some very exciting sort-of-Outlander-merchandise news was revealed a few weeks ago when it was announced that Sam Heughan will serve as the new Global Brand Ambassador for British clothing designer Barbour.  I mean, Barbour and Sam Heughan go together like fish and chips!   Brilliant choice, Barbour!  Known for its rugged outdoor looks and waxed jackets, Barbour has also asked Sam to help design his own capsule collection of clothing items, which will incorporate the brand’s exclusive tartan design.  Sam was recently at a photo shoot with Barbour and posted about it on social media.  Sam and a cute dog?   Swoon.   Mark me – I predict right now that Sam’s capsule collection will sell out!   Follow Barbour on Instagram and Twitter for updates, and I am sure Sam will be posting about it too! 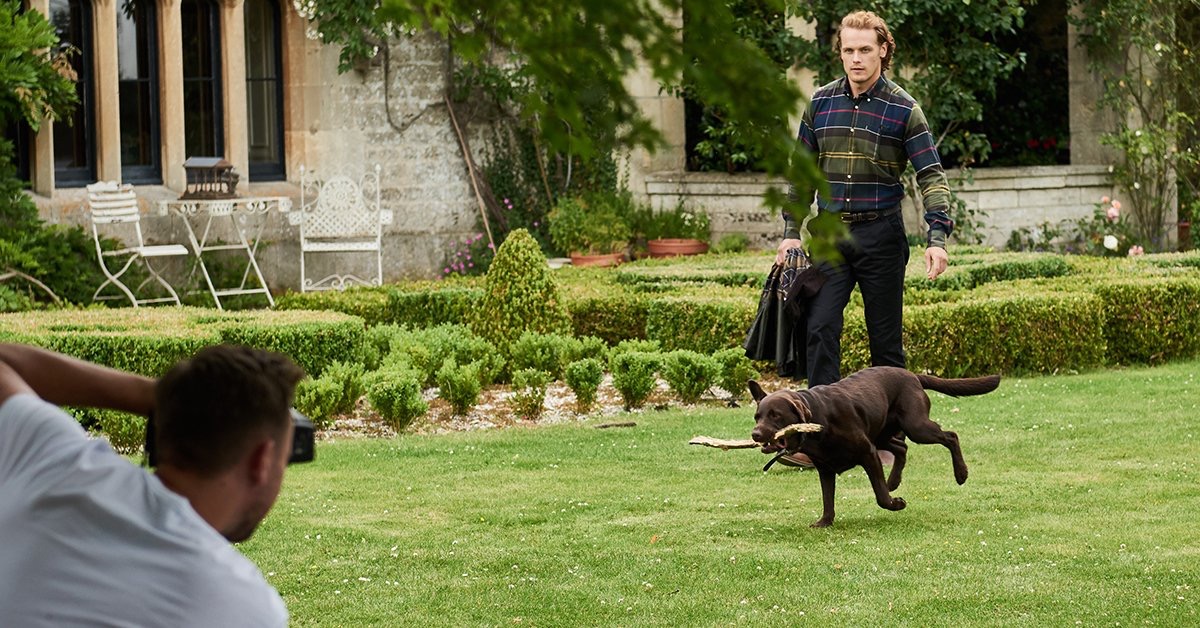 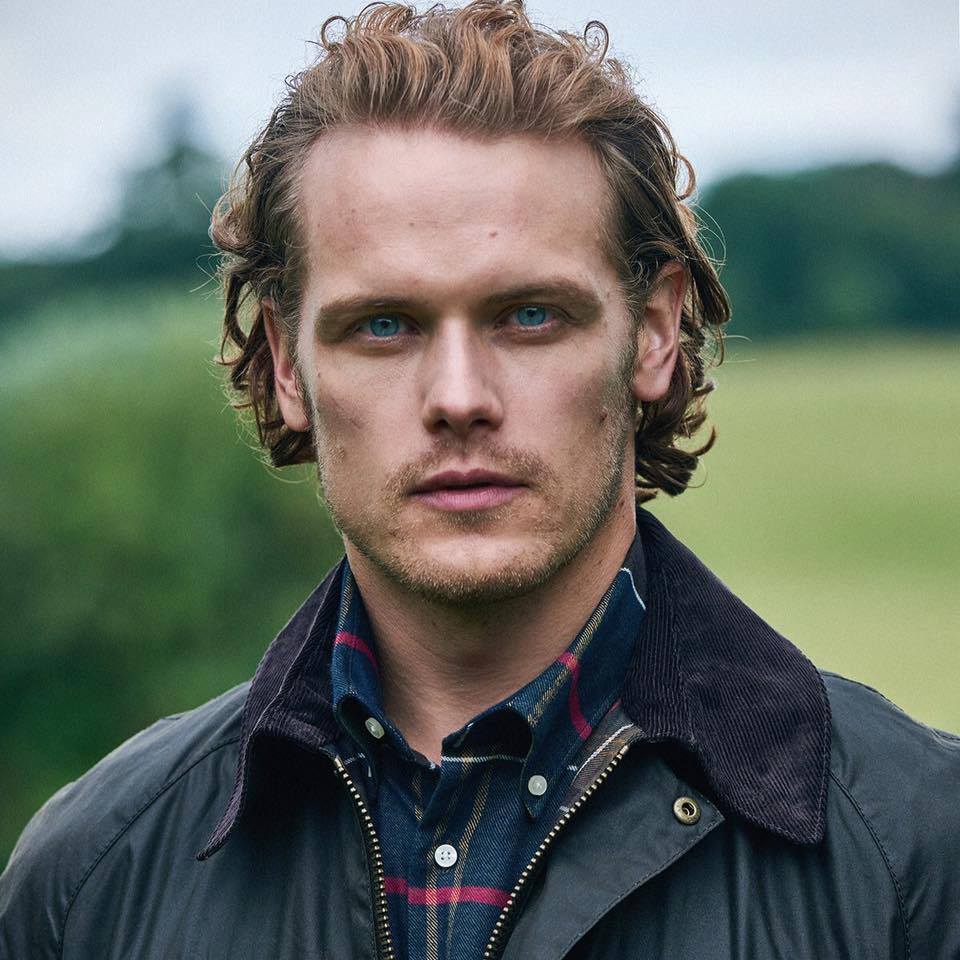 Also in the “merchandise coming soon” category (and I personally cannot WAIT for this), Outlander musical composer Bear McCreary’s soundtrack for Season 2 is available for pre-order now and will be shipped and in mailboxes by late October.  You can order here, and also read more about Bear’s Season 2 compositions at his Blog/web site here.  Bear’s blog is a fascinating look into the historical and musical significance of some of Season 2’s theme music. And, well. . . Bear is a genius. So, there’s that.

Diana Gabaldon Makes the Rounds
While I know we wish Outlander series author Diana Gabaldon would just stay home and finish Book Nine, her time and presence is in high demand.  She’s been busy since Season 2’s finale globe-trotting, speaking at and attending various events.  Thanks to the Inverness Outlanders, who were able to capture Diana’s visit to the Culloden Battlefield in July.  The video quality isn’t great, but the audio is pretty good and discernible.  You can find all the various parts of Diana’s talk at Culloden on Inverness Outlander’s YouTube channel.  Diana talks about some very interesting and less frequently addressed topics, including how she came to use the Dun Bonnet’s cave reference in “Voyager” as well as her very personal and emotional ties to Scotland and, in particular, Culloden Battlefield.  Definitely worth a watch/listen.
Diana also recently attended the Fergus Highland Games in Canada.  Once again, she sat for hours and signed many, many books and sat for photos with literally hundreds of fans = #Saint.  Diana also spoke just this past weekend at the High Plains Library in Denver.   Lastly, Diana has an upcoming appearance at the Entertainment Weekly PopFest in downtown Los Angeles in late October.  Yes, Entertainment Weekly – the magazine that brought you the super sexy cover photo of Sam and Caitriona that debuted right before Season 2 premiered and was the talk of the Outlanderverse for weeks.  The Outlander Cast Blog drew our own (controversial) opinion about the Cover Photo in a Blog post. We’re still living it down!  For more information about PopFest, or to purchase tickets to attend you can go here.

Well, Obsessenachs. I think that’s all the news that is fit to print (though we certainly don’t mind some unfit here and there).  Be sure to regularly check the Outlander Cast Blog, especially as new Season 3 cast members get announced.  We’ll be taking a look at each new cast member and providing a little dossier on their past work.

And as always, we will also be churning out more original content on the blog just as fast as our little fingers can type.  Outlander Cast Blog is your source for all Outlander News because, unlike you, we don’t have lives. . . just Outlander!

Have you pre-ordered any of the new Outlander merchandise? Are you currently or will you participate in any of the Read-Alongs for Voyager? Which Casting Announcement for Season 3 are you most looking forward to?
?