Outlander on Break – Rounding up the Cast and Crew’s Holiday

Do you remember in elementary school when you returned from a blissful couple of weeks of freedom from homework assignments, annoying teachers and the daily academic routine to find your school chums buzzing loudly in the hallway about what they did over winter break? Commonplace were conversations about new toys received at Christmas or the hours spent playing Atari Pong (dating myself!), trips to Grandma’s house and/or the family ski cabin or beach house. Then there were those really annoying kids who havered on about their trip to Disneyland where they rode every ride (5 times) whilst simultaneously becoming besties with Mickey and Minnie. I can say now that my winter breaks are decidedly boring compared to days-of-auld. But, given how hard our Outlander Crew works, I am happy to report that they made the best use of their seldom-free time over the holidays.

For most of the month of December, the cast and crew were working 6-day weeks. These are long, 12-15 hour days in the bone-chilling cold and wet of Scotland. Just a day or so before Christmas, the cast and crew took off for a well-deserved two-week winter break! So, what did they do? Where did they go? We have some clues… and we even threw in a few #Gonelanders for good measure, just because we remain ever devoted!  Read all about it after the jump…

For starters, Caitriona Balfe had some business to attend to in Los Angeles. But, prior to that, we think she was home in Glasgow and in Ireland spending time with family and friends and beloved fur baby, Eddie.

Cait then made her way to La La Land for a round of interviews and appearances leading up to her star turn on the red carpet at the Golden Globe Awards. Outlander’s sole nominee this year, Caitriona represented well. She breezed through interviews with Vogue , Hollywood Reporter, The Wrap and attended numerous pre-Globe soirees, including W Magazine’s Party honoring nominees plus the annual BAFTA Tea Party.

Fab new issue of @wmag celebrations with @Audi … thank you @LouisVuitton @TaraSwennen and @Keurban for the Glam pic.twitter.com/jdjeUeK8nH

And then the big night came. The effervescent Outlander SoCal gals gathered along the road and in the bleachers above the red carpet hours before the start of official arrivals just to catch a glimpse of Caitriona and shout messages and wave signs of support.

What a welcome wagon for our gal!! #Outlander @caitrionambalfe pic.twitter.com/40kImo195m

The hashtag #CheersforCait made its way through the fandom as we all crossed our fingers and prayed for a win and some recognition for Caitriona and Outlander. And, for those of us waiting to see what Cait wore on the Carpet, we weren’t disappointed. Elegant, classy, simple and so, so chic. Caitriona showed all of Hollywood what a true star looks like! 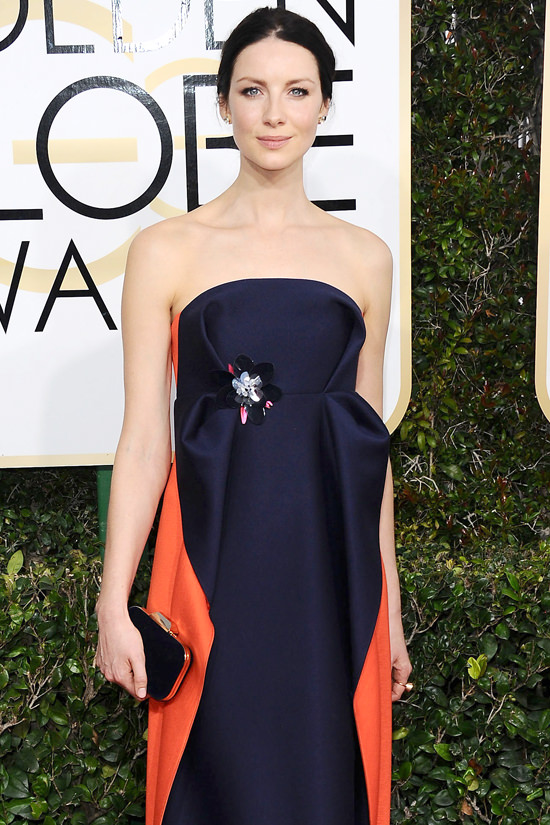 Alas, Caitriona did not win. But, always and forever in our hearts, she’ll be our Golden Girl. To be nominated not once but two years in a row is a phenomenon for an actress so new to the industry and on a premium cable show still feeling its oats. Rubbing elbows with big stars at a major awards show, being interviewed by fashion and industry heavy-weight publications is not a bad way to spend a Winter Break. Caitriona did us all proud. Now I hope she gets a few days to really unwind before heading back to Scotland and the wet and mud!

Sam Heughan
Not to be outdone, our main man, Sam Heughan, was actually doing the Lord’s work for all or part of his break. His fitness and lifestyle program “My Peak Challenge” (MPC) kicked off its third year on January 2nd with much fan-fair. My blog colleague, Holly Richter White, wrote about how MPC has gone mainstream and how Sam’s dream is positively impacting lives. Indeed, thousands of men and women decided that 2017 was the year to get fit while achieving some personal goals by signing up for MPC 2017. And, even though Sam was enjoying a holiday break in Amsterdam and Switzerland, he still took time to Tweet encouragement to Peakers around the globe!

Welcome to all of our Peakers and the first day of @mypeakchallenge !#jazzhands #mpc2017 pic.twitter.com/uD4wpdYut5

Sam even shared a personal challenge… sort of. He didn’t actually tell us what it was, but my guess may be he took to the slopes and tried some skiing or maybe snowboarding. Pretty ambitious to try skiing in the Swiss Alps, or at the Matterhorn for that matter! But, I know I felt emboldened reading about Sam taking on a big challenge despite being fearful.

Today! I was challenged to something I thought I couldnt do.

Thank you for inspiring me. ALL our @MyPeakChallenge Peakers! pic.twitter.com/UerJGP8YCL

And, it would seem, just a day after his return from holiday, Sam is back at the gym encouraging all Peakers to stick with it. The man is a saint. MPC 2017 is well underway with Sam leading the charge. Encouraging thousands of people around the globe to set goals and get fit? Not a bad way to spend a Winter Break. You are the man, Sam!
Nell Hudson
I know, I know… Laoghaire rears that baby-faced head of hers. But, character aside, the lovely Nell Hudson will have a pretty significant part to play in season 3 of Outlander. She is a busy girl, currently working on the PBS Masterpiece series, Victoria. However, Nell took some time over the holidays to venture to Iceland for a dip in one of the region’s famous hot baths and a visit with some Icelandic ponies. Awwwww.

Ron Moore and Terry Dresbach
Well, it would seem that Ron and Terry’s winter break was a bit less jolly than some of the others. Given Ron’s rigorous schedule (back and forth from Scotland to Los Angeles every few weeks), I am sure both he and Terry were looking forward to spending some quality time together. But, such was not the case when both had unfortunate accidents. Ron apparently sustained some injuries puttering about the house and Terry another injury — origin unknown. Oh dear, you two!

Ron is in a sling, my hand is wrapped.

@pnhmr Ron was attacked by the garage door

Hopefully the Showrunner will recover quickly, or he may need to help the Scottish workforce further by hiring a golf cart driver to buzz him around the Cumbernauld studio!  And, let’s just hope it’s not Terry’s main sewing hand that sustained the injury! Get well soon to the both of them!

Graham McTavish
One of our favorite #Gonelanders spent most of the weeks leading up to the Christmas holiday delighting his fans (female, in particular) with daily videos of his push-up challenge to support combat veterans. I find Graham a most singular man and he never lets us forget it! It would appear that Graham traveled somewhere warm to spend the winter break (and his birthday on January 4th) with family. Good for him. And, not to be outdone, we got more shirtless fitness-related Graham views. God bless Mr. McTavish!

Annual Birthday workout with my brutal young trainer
A photo posted by Graham (@grahammctavish) on Jan 4, 2017 at 8:18pm PST

Duncan Lacroix
Fresh off the push-up challenge himself, Mr. Lacroix took the plunge and joined MPC over the holiday break. It would seem that his fitness-crazed colleagues may have had a lasting effect on our dear Murtagh. Duncan heralded his membership in a way only he can!

Ok for those asking I signed up this morning. I’m hoping to be as big as The Rock by next Xmas. Good luck mofos @MyPeakChallenge https://t.co/sflWOoMJnF

It also appears Duncan spent some time in London. Originally from Southeast Greater London, I believe his mother and  family currently live there. I’ve noticed Duncan spends a lot of time at the theatre when he has a break from acting. He worked in theatre for years and is very passionate about it having performed in many stage productions in Dublin and London throughout his career. He took in a production of Amadeus at the London National Theatre while home during the holiday. And, guess what? He noted that another #Gonelander was involved in the production.  We miss you, Willie!

Lucky enough to nab a ticket to see Amadeus at the National Theatre and who do I spy in the programme but our Willie @FinndH pic.twitter.com/sbU961g9lX

Scott Kyle
Sadly, Scott Kyle – a.k.a. Ross of Lallybroch – also suffered some misfortune over the holiday break. His community theatre in Bathgate, Scotland, was vandalized and some equipment was destroyed. But, Outlander fans to the rescue when close to $4,000 USD was donated to help with the repairs by various fan groups for Scott.

To the @ScottsKylanders and everyone who has supported the work we are doing @BathgateRegal thank you all for your kindness and generosity x pic.twitter.com/k4gdwxYMSe

Also, yet another Outlander has jumped on the fitness band wagon. Over the holidays, Scott was working out like a fiend, challenging himself to the “Kylander 1000” — his attempt to burn 1,000 calories per day. Whew. Impressive, Scott!

Matt Roberts
And, then lastly we check in with our beloved Matt Roberts. He is the chronicler of Outlander the series as a respected writer/producer but, importantly, through his unique photography of cast and crew and spectacular Scotland. Matt did an impromptu Q&A just days after Christmas where he answered some season 3 leading questions.

.@sweetriknlady We have some amazing Eps “in the can – finished” (and more to come) — I truly can’t wait for you to see them. #Outlander

Not clear if Matt traveled for Christmas or not. The man clearly loves what he does and is so passionate about Outlander and his work. I wouldn’t be surprised if Matt stayed on in Scotland and just kept working. The fandom should thank him every day for his passion and his drive.

And, so to wrap our winter break news round-up, we leave you with some amazing images from THE Matthew B. Roberts. Lovely. Evocative. Scotland.

Bring on the rest of season 3 filming! Happy New Year, everyone!

Then is happened #Scotland #scotlandsbeauty never ceases to amaze #sunsets #outlander
A photo posted by Matthew B. Roberts (@nofoolingproductions) on Jan 4, 2017 at 9:57am PST

I was going to write something super witty and profound… then I remembered a picture is worth a 1000 words and decided against it #outlander #sunset #loch #rock #calmwaters #clouds
A photo posted by Matthew B. Roberts (@nofoolingproductions) on Jan 4, 2017 at 7:32am PST

#Glasgow #Kelvingrove #Outlander Just out for an evening stroll pic.twitter.com/GlJwHj9Cb4

On the holiday break – looking out my window -reading #DrumsofAutumn preparing for #Outlander S4 and writing the S3 finale with #ToniGraphia pic.twitter.com/e2qfA57G4k