This weekend, amidst the parchedness of #Droughtlander, we will be granted a tiny drop of relief. No, it’s not a trailer (note to Starz: come out with it already!).  No, it’s not anything related to Outlander  season 3 whatsoever.  It is, however, an opportunity to see our stunning and oh-so-talented leading lady, Caitriona Balfe, in the global spotlight! It’s the Golden Globes… otherwise known as the film industry’s pre-party for the Oscars and the television industry’s after-party from the Emmys… and it’s airing LIVE this Sunday at 8pm EST on NBC!

This is Cait’s second nomination in the Best Performance by an Actress in a Television Series, Drama category, and her star power and persona as a woman of fashion has only grown since last year. It’s left us pondering what one-of-a-kind frock Cait might don for her strut down the red carpet. But before you squeak out a feminist cry about how she’s a real artist who should be asked questions about her performance and worldly issues rather than those about her fashion choices, take a breath.  We know, and we agree.  And so does Cait, who told the world as much in an interview with Vanity Fair  titled, “This Sunday, Caitriona Balfe Would Like You to Ask Her About Something Other Than Her Dress.” Noted, Cait. NOTED. We won’t ask you… we’ll just ask each other!

So even if glitzy awards shows aren’t your thing, indulge with us in the frivolous fun of playing stylist for a day.  Our very own Anne Gavin wrote the below post for last year’s Golden Globes and we thought you’d enjoy a second serving of it ahead of this year’s show. Enjoy!

Outlander Fans all over the world squealed with delight when Outlander’s gorgeous leading lady, Caitriona Balfe, received a Golden Globe nomination. Now, that got me to thinking… major award Show, Hollywood Foreign Press, network television coverage, celebrities, red carpet plus… OUTLANDER!  Jesus H. Roosevelt Christ! It’s this Outlander fan’s wet dream — combining my favorite television show with my love of fashion and all things style. So, to fully complete my fantasy, I am going to play stylist for the day and make some suggestions for what Caitriona could wear for the Big Night. Here we go…

Every Outlander fan has to admit to having just a little bit of a girl crush on Caitriona Balfe. And, let’s not forget to mention the envy we all feel about her tall, statuesque, Victoria’s Secret model body. As I have often said, the girl could wear a paper bag and look good. What a dream to dress her. So, you notice I titled this post, “What Caitriona could wear.” That’s because I am not a professional stylist and who am I to tell her what she SHOULD wear, really? But, having observed a little of Cait’s personal style as well as some of her hits and misses on the red carpet, and being a slave to fashion and style myself, I am going to pretend I’ve been asked to style her for the Golden Globes. So, you can agree or disagree, but take this in the spirit in which it is provided and let’s see what we could dress our beautiful Cait in so she’s a stand-out on the red carpet.
Pop It with Color

Caitriona is very fond of black. She’s worn black to a number of Red Carpets including this Gareth Pugh velvet column gown to the Edinburgh Film Festival this past summer. And, you may recall seeing Cait with Sam on the Red Carpet at the 2015 People’s Choice Awards in this short, black Valentino dress.

Cait also loves a jumpsuit. She wore a beautiful black Bottega Veneta sleeveless jumpsuit to the LA PaleyFest in March. It’s hard to go wrong in black, really. But, this is the Golden Globes — a real Hollywood glamour, legendary kind of night. Not quite as staid as the Academy Awards but the ladies usually do it up with long gowns and lots of color. And, Cait has shown she can handle color and handle it well. Consider her Solace London bright yellow/gold gown at the SAG Awards in 2015. Or, who can forget the sleek purple and black Roland Mouret gown Cait wore to the Outlander Mid-Season Premiere in New York City in April 2015.

Frankly, with Cait’s fair skin (especially after spending the last several months filming in gloomy, vitamin D-less Scotland) I think Cait needs some color for the Carpet in Los Angeles. So, first up, how about a nod to her Irish heritage and a pretty, emerald green gown. Here are my picks for an homage to Cait’s Emerald Isle.

Or, maybe an elegant, flowy, cobalt blue gown. However, I would swap out the gold belt for a bejeweled belt/sash instead and add some amazing earrings… 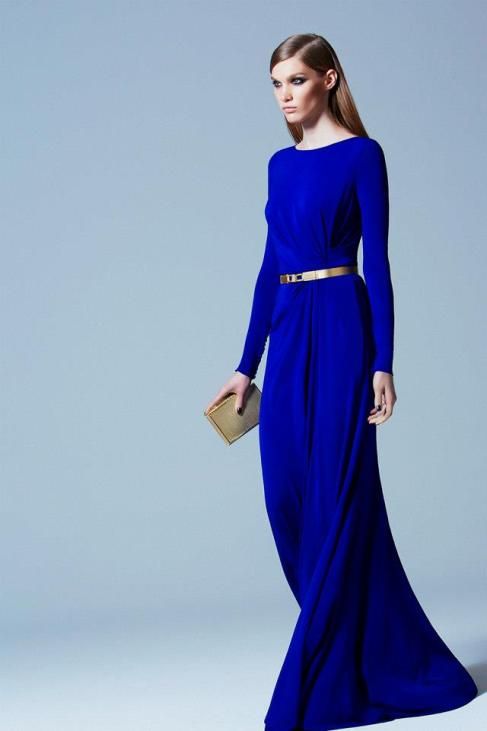 I also love this simple, yet elegant navy with gold embellishments McQueen gown.

Keep it Simple but…

There is also Cait’s personal style to consider. Cait seems to like simple, not overly embellished and not overtly sexy (i.e. not showing a lot of skin) gowns/dresses. I’ve always been impressed that Cait hasn’t succumbed to the pressure many older actresses feel (“older” being a relative term) of trying to dress younger or sexier. Cait is who she is. She is a classy, naturally beautiful, elegant, mature woman who knows herself. It’s another reason we Fan Girls love her so much. So, there will be no JLo style dresses or need for double stick tape, as much as I love a good sexed-up Zuhair Murad gown! Here are my picks for a few simple numbers reflective of Cait’s Red Carpet style to date but with a little something extra. 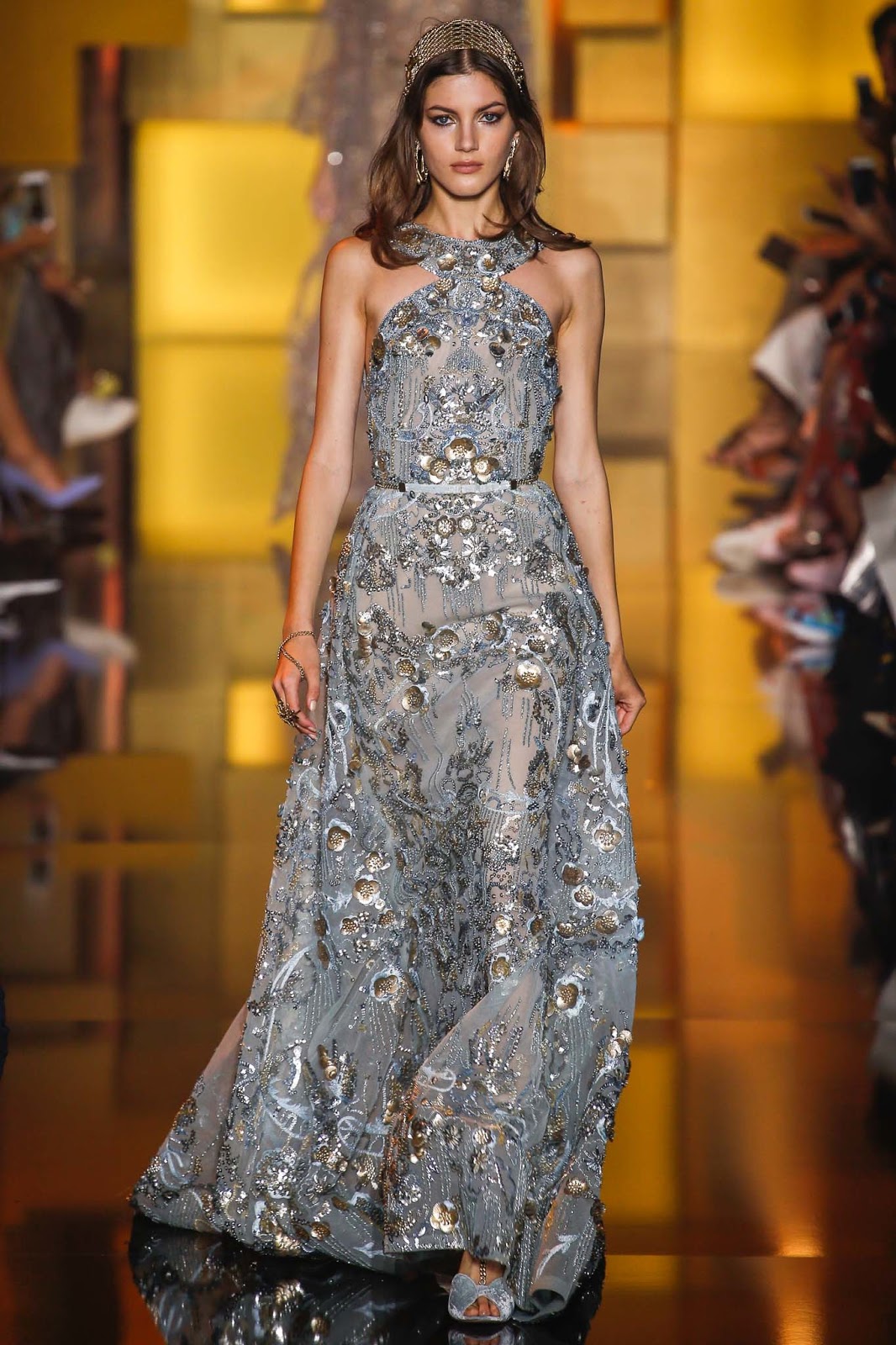 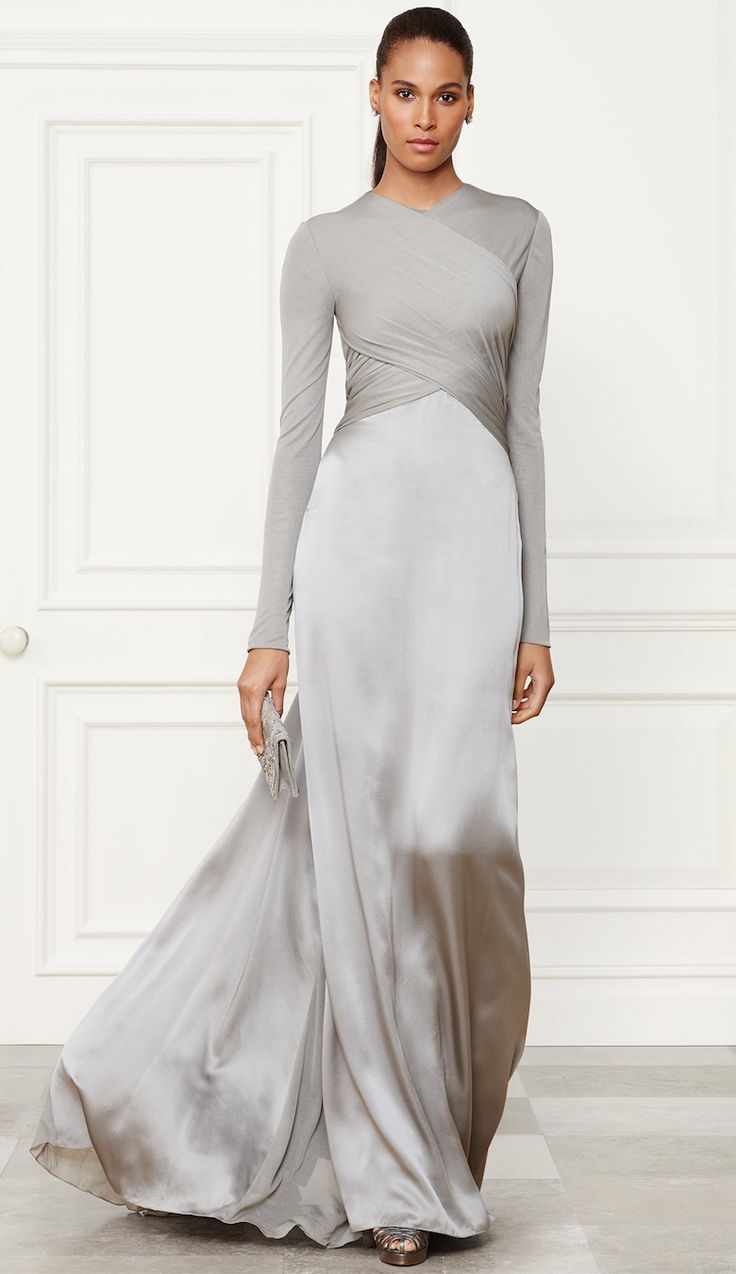 Stepping Outside the Box

Now, maybe Cait is feeling like the Globes can be a fashion break-out moment for her, Maybe she doesn’t want to play it safe. As a good personal stylist, I would have sat down with Cait and asked her about the look she wanted to achieve on the Globes Carpet. If she told me to push the envelope a little, I might recommend this stunning Alberta Ferretti Limited Edition Couture dress. It would definitely be a nod to Paris and Outlander Season 2 and would look amazing on Caitriona, not to mention a great conversation starter on the Red Carpet.   Definitely off-beat, not a safe choice and more skin then she is used to showing but Cait could pull it off! 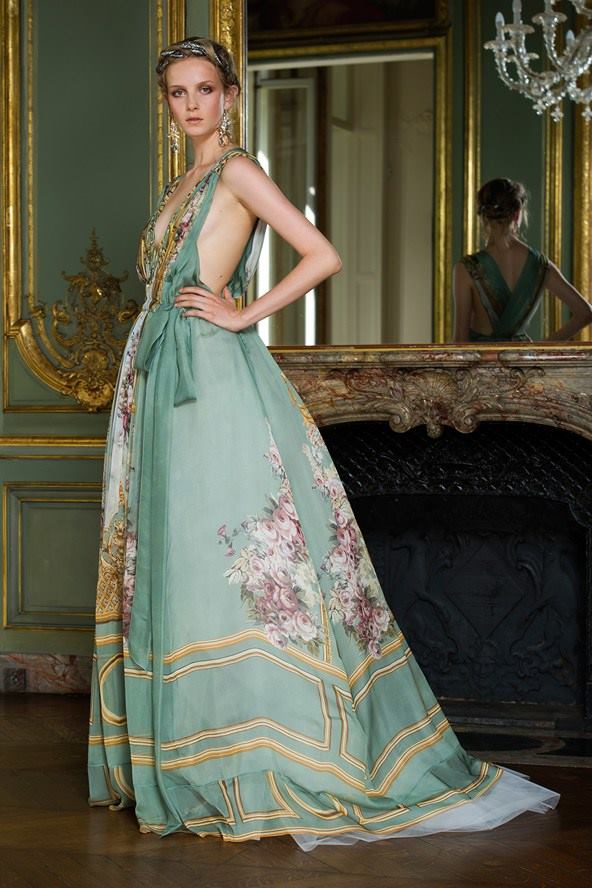 I might also suggest this gorgeous Jenny Packham gown — one of Duchess Kate’s favorite designers. The gown is quirky but sophisticated and the color is TO-DIE for.

Or, if Cait were to buck color, she could go Black with an Edge. This beautiful Valentino would be perfect for Cait. It has the high neck she favors but the sparkle worthy of a major Hollywood Red Carpet. 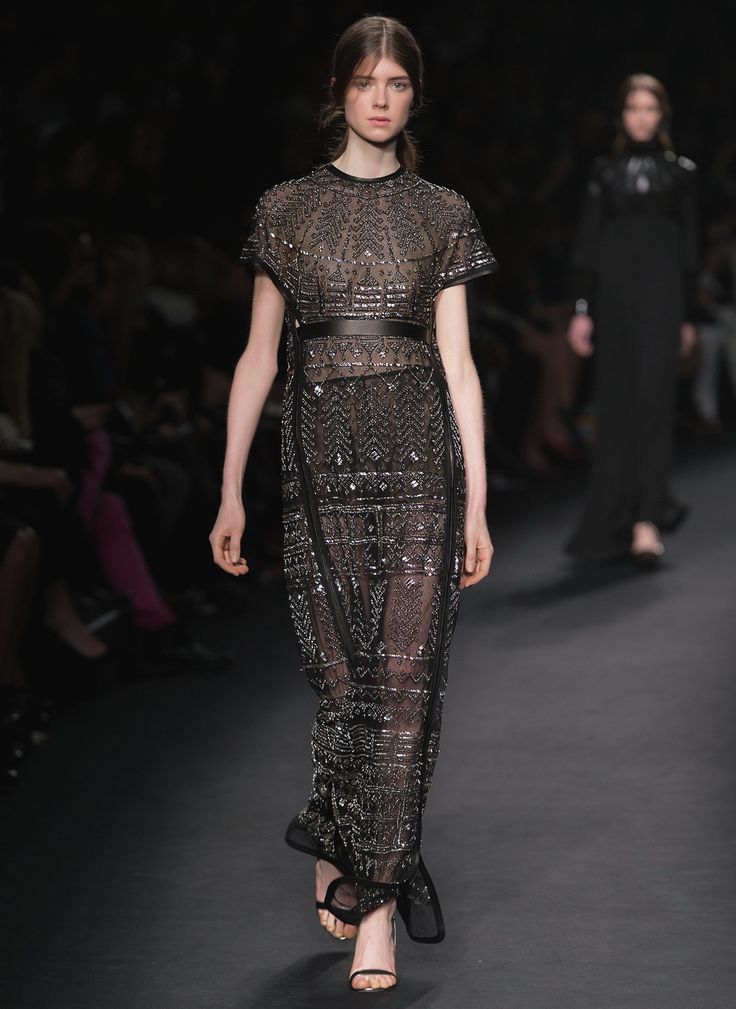 Or, this shimmery, yet flowing, Oscar de la Renta. 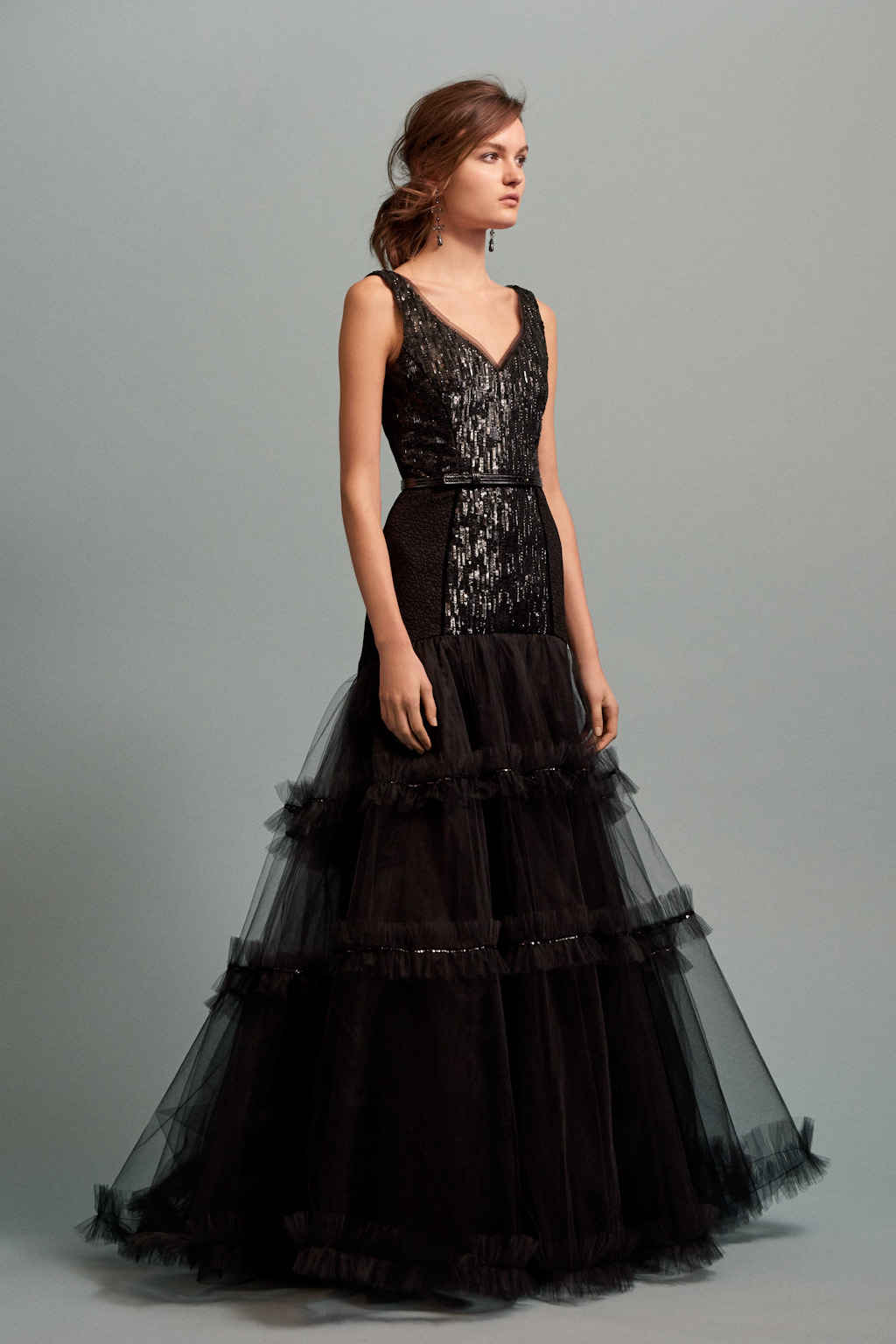 Both of these black gowns combined with Caitriona’s signature Red Lip would SLAY the Carpet and the critics.
Or, Cait could go for an unusual and colorful print.

Personally, I LOVE this dramatic red Pucci. Again, a little quirky but Cait could work it. 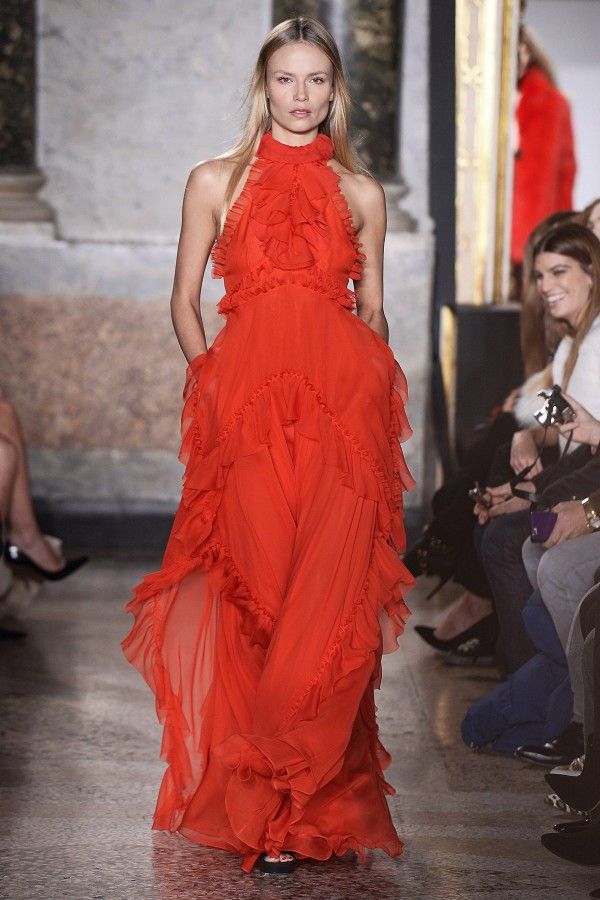 And, I could absolutely see Caitriona wearing this dress, too. Gorgeous color and detail, high neck and the structured collar that Cait sometimes favors. 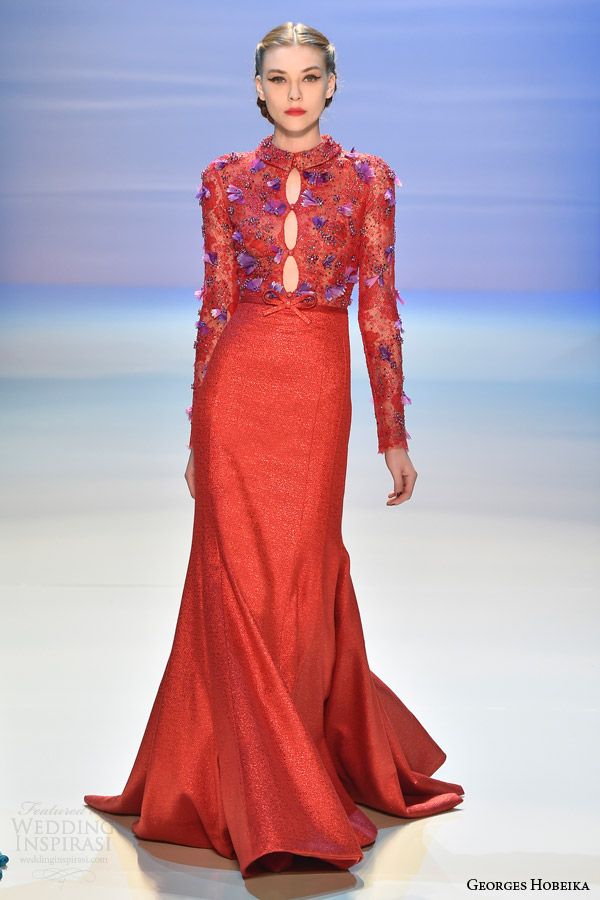 I mentioned some Red Carpet misses earlier. If I am being honest, I’ll admit there have been some fit problems in a couple of Cait’s earlier choices. As I said, Cait loves a jumpsuit and has been spotted in several over the past year. But, jumpsuits can be unforgiving and need to be perfectly fit or all kinds of things can go wrong. Fashion Bloggers and Authors of the “Fabulous & Opinionated Guide to Celebrity Life & Style” Tom + Lorenzo have been brutal at times about Cait’s Red Carpet looks. But, I can tell you, it comes from a place of love. They adore the Outlander Series (often doing re-caps on their Blog) and largely cheer for Sam and Cait and their Red Carpet fashion choices. But, they have not generally looked too kindly on Cait and her Red Carpet style. They vote for the simple sheath, not overly done and think Cait should stick with that. I agree for the most part but I think Cait has some room to grow style-wise, especially at a high wattage event like the Golden Globes.

Regardless of what any fashion critic has to say about our beloved Cait or what she wears, I just know she’ll look beautiful and we will all be whooping and hollering from our couches when she KILLS IT on the Red Carpet. And, who knows…maybe she’ll wear the best fashion accessory there could ever be — Sam Heughan — on her arm. The King of Arm Candy and so much more! Go Cait! We’ll be watching!

Which dress do you think Caitriona should wear to the Golden Globes and why?