We have a saying in South Africa — ‘n Boer maak ‘n plan — i.e., a farmer makes a plan. Well, two South African Sassenachs did just that to scoop Sam Heughan’s arrival at the Cape Town airport.

We Facebooked, tweeted and watched the Emerald City ComiCon panel with Sam Heughan and Caitriona Balfe, listening super-carefully for any small hint we could use to make a plan. I checked airline departures, arrivals, travel times. We worked out when Sam might be arriving in Cape Town — sometime Monday morning, between 11 and 3, we thought. Maralyn was the Outlander Cast Clan Gathering member on the spot and she was super excited to see if we could make this plan come together. And we DID! Hannibal of The A Team would be proud of us. Here’s more about our sleuthing…

We’d done some educated guessing based on one of Sam’s tweets about an epic journey this weekend, Cait saying at ECCC that she had two suitcases waiting in London to be picked up, our googling of flight times and lengths from Seattle to London, then London to Johannesburg… or the direct flight from Seattle to Johannesburg and then the link flight to Cape Town that would have them arriving about 11 a.m. South African time.

Our first hint we were right? Sam’s plane on the tarmac. 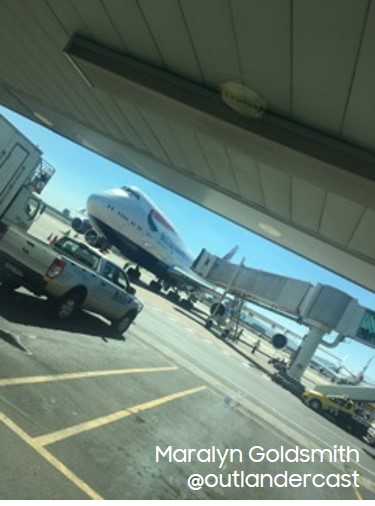 Not being greedy, Maralyn asked a couple of friends to go along with her and, with books firmly clutched in hands, they sashayed into the airport. They were lucky (or plucky) enough to find Dave Brown, the producer, who they asked about the possibility of talking to Sam.?? 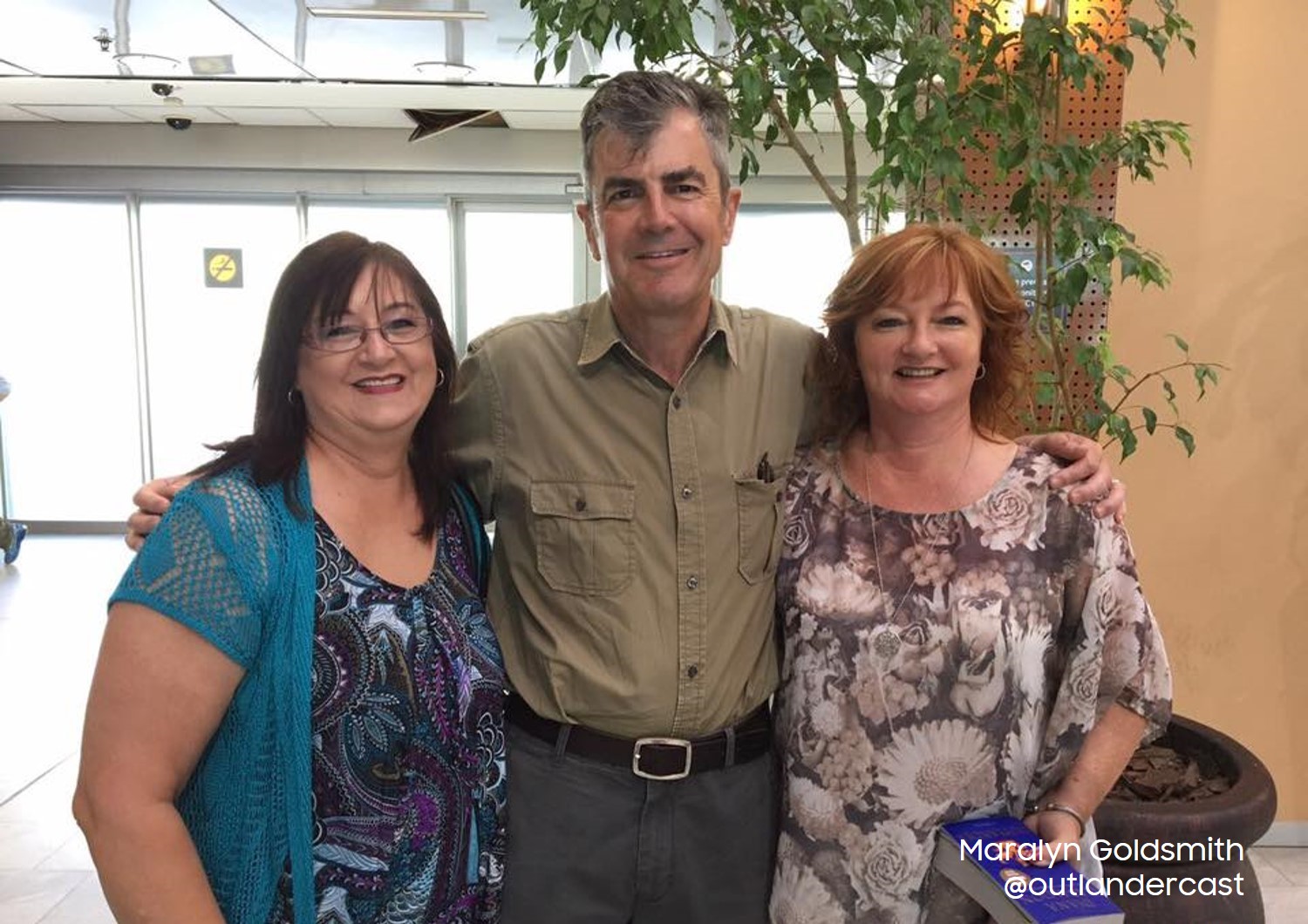 I’ll let Maralyn take it over from here…

I am absolutely over the moon!!!! I got to meet our Jamie (Sam Heughan) at the South African International airport this morning [as they arrived to film] for the third season of Outlander  in Cape Town. I took two fans and met up first with the producer, Dave Brown. He was very nice when I spoke to him. He wanted to know how we knew Sam was landing at that time and whether they leaked something, but I assured him that we figured it out ourselves after Sam’s tweet that he was halfway on his way to South Africa. Dave was quite impressed, but also asked that we give Sam space when he arrived so he could ask Sam if he would like to meet us. We agreed to stand to one side, and while our hearts were pumping ten to a dozen, we waited and prayed that we would get this rare opportunity to meet him in person. ? 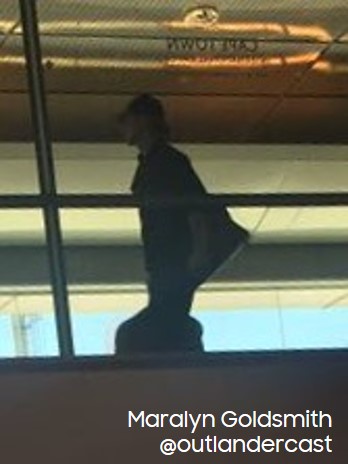 Dave then spoke to him and and — voila — Sam agreed to meet us and sign our Outlander books! Oh my Lordie, Sam was just so nice about it. The friendliest person ever and never mind how tired he was from the flight, he still smiled and was so adorable. We called him our Sassenach as he is now our Outlander. He laughed at that and we had a good old chat. (Wish I could take him home with me.) 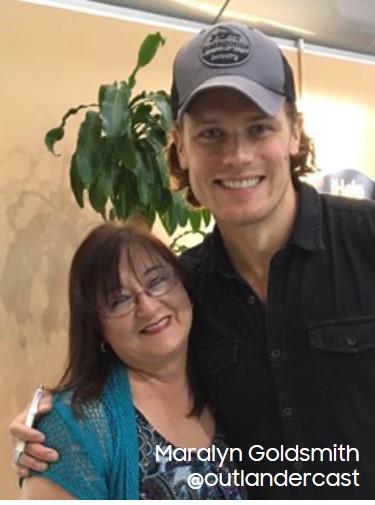 And here’s another picture I took with Sam, along with my sister, Felicity, and friend, Belinda. 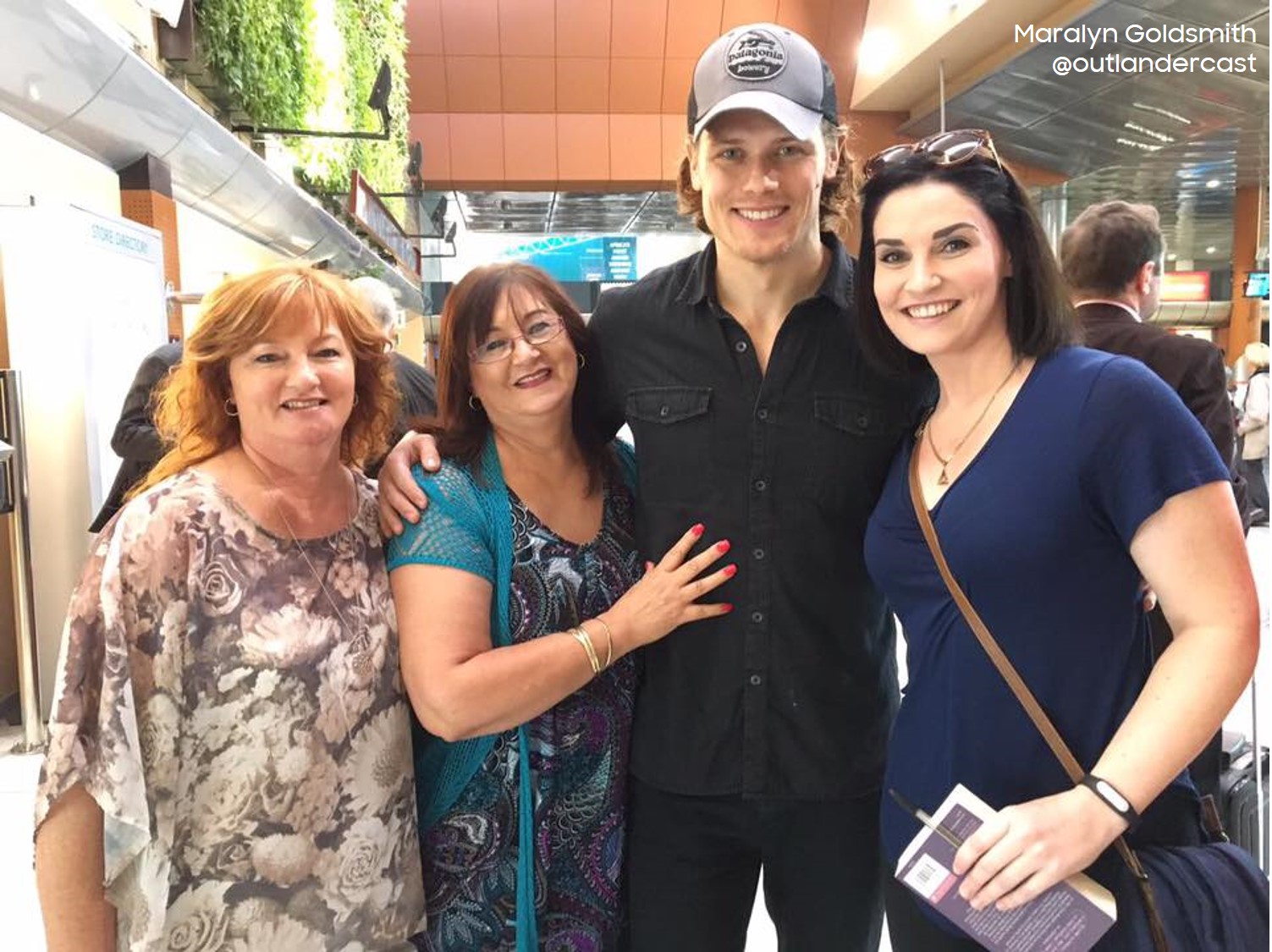 Jayne again… I have to admit I got the shakes and goosies myself when I read Maralyn’s e-mail confirming that the quest had been successful, even beyond our wildest dreams.

But our cup was still to run over — Sam tweeted this message after meeting Maralyn and the others: 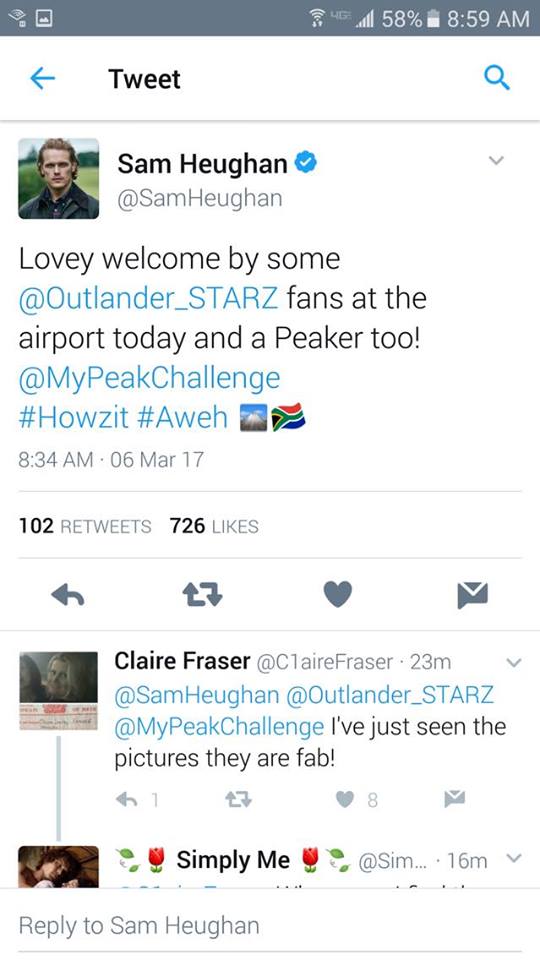 We DID it! Guessed right and got the scoop! Triple deluxe covered in chocolate — Sam arriving in Cape Town with fans to meet him. Thanks, Sam, for being so generous with fans, even after traveling more than halfway around the world without stopping. Most people would snarl after 13 or 14 hours on a plane, but Sam was his usual gracious self. We have a Laird in a million.

And WELCOME/ WELKOM/WAMKELEKILE to our beautiful country of South Africa! Hope you have a magical stay with us, our Uitlander/Sassenach. Want to read more about what the Outlander cast and crew might do in South Africa? We’ve got suggestions.

Jealous much? What would you do if you got the chance to meet Sam like this?