Fanwoman Without a Show: Living through Droughtlander AGAIN!

Without revealing one smidgen of partisan detail, I will simply say that these past few months in the U.S. have been supremely distracting. After getting sucked into the quicksand of current events, I needed a break and I needed it bad. I needed the kind of distraction that could literally take me away to a different time and a different place. I needed — you know where this is going, friends — OUTLANDER — and I needed it now! It was time for an Outlander Starz redux — again.

In my world of WithOutlander, any official re-watch worth its whisky always begins with season 1. Season 1 isn’t “old news;” for Outlander fans, it’s THE news — at least it is at my house. My focus on S1 mirrors my Outlander book-reading style; despite having read the entire series of novels and all of the offshoots and novellas, I always go back to the beginning. An Outlander reread is a sacred undertaking; it’s a gift I give to myself. Whether I’m reading, listening, or now, gloriously viewing Outlander on screen, starting all over again is like what Madonna sang: I’m touched for the very first time.
So, without further ado, here are my observations from my most recent rewatch. Let’s see if anything rings true with you.
First some backstory.
My rewatching begins while the season is still in full swing. Each new episode is watched at least once daily until the next episode comes around. That cycle repeats itself with each episode until the season is completed (Nor am I alone apparently, as our survey showed.). My habit keeps my on-screen Outlander anticipation going, as in, I pray think/know/hope what will come next episode. This also allows me to associate any screen cap I might encounter in my internet travels with the exact scene that’s being depicted, pinpointed to the precise moment of dialogue and the swell of music that goes with it. 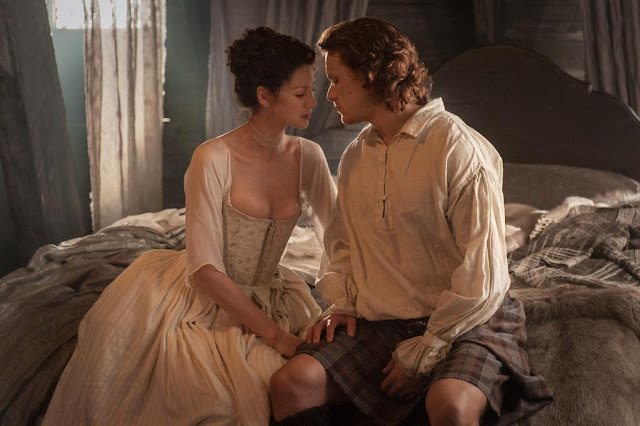 These are useful and valuable things for a fanwoman such as I, because when the season is over, it’s not, um, over. I can savor and pore over specific episodes that resonate and hold my attention from start to finish. I have my pet moments, my favorite bits of dialogue, and to be perfectly honest, those where I note that Sam’s Jamie is a really good kisser, whereupon I ponder “modesty pouches,” or how fictional logistics ensue on the carpet when the kilt looks pretty much intact. Burning questions we all have, I know.
Despite scores of previous re-watches, certain moments must not be missed. My list is too long to list, but aside from the obvious (all of the “The Garrison Commander” and “The Wedding,” at the very least), these moments run the gamut from a pointed glance from BJR, a close up of intertwined hands or a loving touch, all the way to Rupert’s hilarious “that’s what she said” moment, and any of those times where Jamie’s eyes flare with fear, anxiety, or anger. Those last ones, dubbed “Crazy Eyes” by some beloved fandom friends, make noteworthy screen caps for all of Outlander posterity. 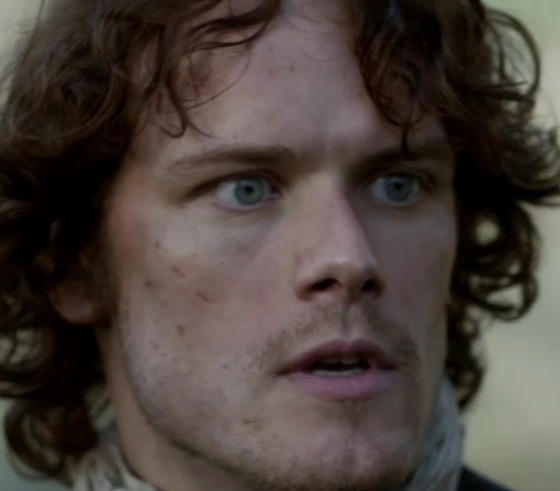 This obsessive rewatching aside, I do have a confession to make. Forgive me, Father, for I have fast-forwarded. As a long-time reader, the premiere of Outlander unfolding on screen was breathtaking. But because things only really get going when Claire first goes back in time, in my post-season episode 1 re-watching habits, I skip directly to the mid-episode mark to that point where Claire’s through the stones, and the cinematography gets all glow-y and Claire’s lovely white dress goes bad. My other S1 skippy moments include Mrs. Graham reading Claire’s palm, or much later, telling Frank “but they returrrn” (I’m still not buying that she would give that one away), or when Frankie pulls the blackjack (!) from his pocket for the big beat-down.
I’d be lying if I didn’t mention that Claire’s boogie-woogie roadshow is part of my fast-forward sinfulness, too. Since I do not put much stock in dream-sequences, when Mrs. Fitz goes exorcist over Claire’s confession, I have also applied the button. Look, I love both Mrs. Fitz and Mrs. Graham as much as the next person, but when I’m waiting to see Claire and Jamie in the glade, I’m pressing the button. 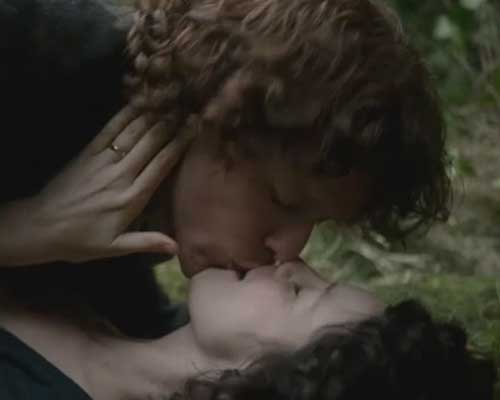 Like a virgin, there is no fast-forwarding when you don’t know what’s in store. But let’s just say that I am suspending my knowledge of Outlander Christmas Future for now. I have placed a piece of electrical tape over the fast forward button, in the same way that I have been known to tape over the “check engine” light. It’s OK; I’ll deal with it eventually.

I swear by this holy iron, etc., that this, my big post-election re-watch of S1, was done with a commitment to watch each episode as a shiny and new entity, and to this end, the Fast Forward function was not utilized.

Results: the takeaways are many, and my fan-womanizing ways grow ever more personal and fun, because, damn, I love Outlander. The consensus among my reading colleagues is that each re-read reveals new discoveries of plot twists, language, and character traits. On screen, there is only so much time for detail; nevertheless, details that I both crave and cringe over await. Je suis prest!

Here’s a bit of what I took in while the fast-forward button was ignored.

Happily, there is no Droughtlander mid-season break for the re-watcher, thanks to all goddesses and fairies of the spooky Highlands. The only break is the bathroom break. Maybe some popcorn, too. Carry on: 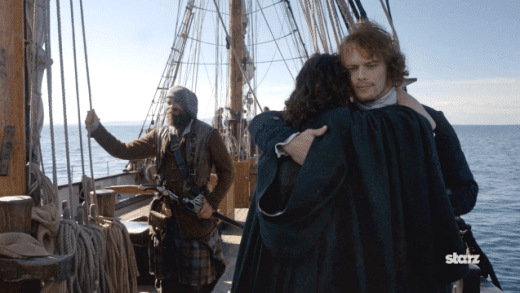 Outlander Season 1 Rewatch: Coda
The serenity of the gorgeous sail away, the swell of the sea and Bear McCreary’s score has me all teared up; again. While I didn’t get the book’s hot springs, hot sex, and the deliriously loving slog up the stone stairs, ending with a vision of the moon through an oriel window, I got much more than I had ever hoped for. Now, where’s my book? Ahhh; it’s right here by the remote.
How often do you rewatch Season 1 of Outlander?
Readers: do your viewing habits mirror your reading habits?