The Five Stages of Droughtlander Grief

Email
I’m not a therapist. I thought it would be helpful to get that out in the open right now so that you can take everything that follows with a grain of salt or an excellent single malt whisky. Hey, I’m not here to judge how you process your information.
With the recent announcement that Outlander  will premiere in September we’ve all been in various states of…er…well something. The reactions have run the spectrum from understanding (“I’ll just be happy to have a quality show whenever it airs”) to hostile (“What the hell is Starz doing?!”) and everything in between.
I thought it might be helpful for us all to think of this recent announcement and its aftermath in terms of the stages of grief that we’ve all come to know. I know that many professionals take issue with these stages because they make people feel that grief is a linear process but, like I said earlier, I’m not a therapist. I’m just trying to bring a little levity to these dark days of #Droughtlander by discussing grief. Trust me. It’ll be fun.
Denial and isolation
When the announcement was made, I could almost feel the collective day-long “Nooooooo!!!” as the news rippled its way through the time zones. It couldn’t be possible. But just as Claire tried to convince herself that she had stumbled onto a film set after falling through the stones, we all knew that this was real when the British fired live rounds at us. No wait, that was Claire. We knew it was real when, let’s be honest, we knew it was real from the beginning because the news came directly from Starz. It was just hard to wrap our Obsessanach heads around it.
Unable to deny the news, you might have attempted isolation. I can do this, you thought to yourself. I’ll just watch both seasons (again). I’ll read the books (again). And then a week later, you look up and there’s a family staring back at at you. The neglect is starting to show on their faces. Your child hasn’t showered in five days because she hates showers and she only takes them because you are the one who forces her into that torture chamber where the fire water pours onto her head and the strange hair potions cause her eyes to burn, which is just further proof that this is torture (true story). They’ve clearly been eating something because there are traces of it crusted on the kitchen counters, the sink, and their faces.* For the good of your family, you reach deep down inside yourself and rejoin them in their world. You feed them, you force the child into the torture chamber, you clean up whatever that is on the counter and you ask yourself what became of the cat you adopted a few weeks ago.
Flashlight in hand, you set off to find her. “It is what it is” you whisper to yourself but you don’t have to like it and you don’t have to be happy about it. Moved by the determined look on your face, your child thanks you for launching this feline search and rescue mission. Bless her heart, she thinks this is about the cat. Welcome, my friend, to anger. 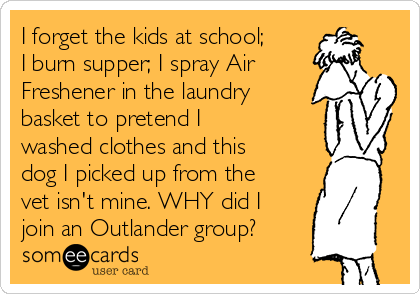 Anger (followed closely by Bargaining)
Oh, you’re angry alright, but at whom and why? It’s because you knew, you could feel it deep in your mildly arthritic bones, that Outlander  would be coming back in April. Even our wonderful writer Holly Richter-White, using her intuition and following bread crumbs dropped by the production crew, speculated on an April premiere with the possibility of a split season. So, you went looking for answers and, after finding none, you blindly lashed out at the ones who have shown you the most love – poor Matthew B. Roberts. The wonderful show writer and executive producer, along with Maril Davis, took a beating in those days, but why? They are the ones working hard to give us the thing we love. They are the benevolent souls providing us with whatever sneak peaks they can. The real beef, you say to yourself, is with Starz. They should have just said something, anything really. They knew we were waiting on them. Could it be that they don’t care?
Months ago, when faced with the prospect of a split season, you railed at the notion. No, I couldn’t possibly wait for the season to begin and then wait again for the second half. It sounded like torture. But now it sounds like the perfect solution. Give me a peek, a few episodes at least, and then I’ll wait patiently while you give me the second part of the season. I promise! The groveling, it’s so uncharacteristically you that you wonder what the hell happened to the tough outer shell of yourself that usually dismisses these sorts of emotional onslaughts as the stuff of childhood and Legwhore (thanks for that one, Teddie Potter). The recognition of this weakness only makes you angrier. 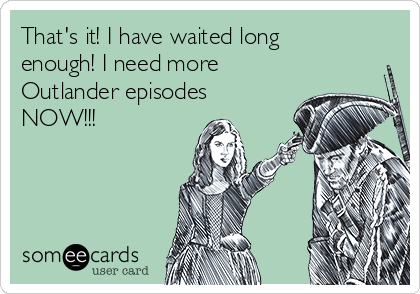 Reminding yourself that the fury of a woman scorned pales in comparison to the fury of a woman waiting on Season 3 of Outlander, you decide to take this up with the person who can do something about it. You will lay your vengeance at the feet of Chris Albrecht, President and CEO of Starz. You fantasize about walking up to his door with 1.7 million women (and approximately 50 men) in tow and demanding answers – salve for your Droughtlander wounds. And then into the misty montage of your fantasy (think Prestonpans) steps the rational you, dressed for the office and wearing sensible shoes, and reminds you that even if you could round up the people and get them to corporate headquarters, you’ve got a meeting at 3:30 and the child has violin practice at 5:30. Forced to listen to the rational side of yourself, you sigh and realize that there is not much to be done here. Your anger, while righteous and probably justified, has no outlet. Your only choice is to wait. And that is when you realize that you have slipped into depression.
Depression
That evening you contemplate another season 1 re-watch, but your heart just isn’t in it. At this point, you can recite practically every single line of dialogue along with the characters, including Frank, and you don’t even like Frank! What is it about him anyway and why do you hate the guy who desperately searched for his missing wife and then raised a child who was fathered by another man? In most stories, he would be the hero. Then you realize it’s because he reminds you of your ex-husband (minus the kick-ass fedora) and you make a note to write a blog post about that one day, but not today.
You sit staring at the bookshelf and briefly contemplate reading a book not written by Diana Gabaldon and then you laugh. Do people actually do that? You know you need to wean yourself from Outlander  but it seems ill-advised to embark on that kind of journey today. You recall the food-esque substance on the counter and shudder. You remind yourself that no matter where you go from here, you must not neglect them again…well…at least not that much.

As the options for the evening scroll through your tired mind, you take notice of something on the TV stand – a trail of tiny paw prints left in the accumulating dust. The cat might be reclusive but at least she’s not dead (another true story). That seems worthy of a celebration. 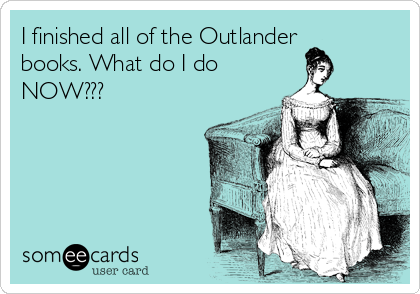 Acceptance
So you pick up the remote, navigate to “Sassenach”, and hit the play button. Because, no matter how gutted you feel, hearing Jamie ask Claire if she wants him to throw her over his shoulder will always make you smile and go all funny inside.

In addition to “accepting” the current situation, I thought I might also do some confessing. This is my first Droughtlander. I only found the show in April 2016 and I watched season 1 and season 2 so quickly that I was caught up by the time of the finale in July. Since that time, I’ve also read the first five books, bought more than one shawl, made a couple of converts, and found some incredible Outlander  communities.

That’s the thing about Outlander.  It grabs hold of you and sends you in search of others with whom you can share your experiences. And you folks, every last one of you, welcomed me into this community and you’ve been nothing but lovely about it. It’s not just me though. I see you do it every single day when a new member gets added. This is a place where people want to be; a place where we can all gather and share moments that made us laugh, cry, or just wonder a little bit. If I have to wait six more months to see my favorite television show come alive, then there’s no group I would rather do it with. You are the best. 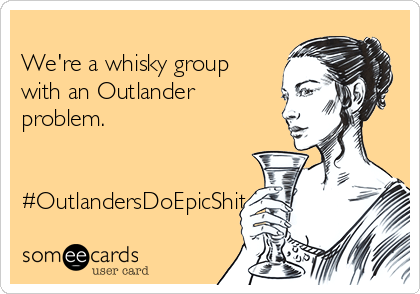 We all know that cat and dog ages are sometimes measured in human years. I think there should be similar math for Droughtlander. As a starting point, I’ll suggest that one month of Droughtlander is equivalent to six months of normal time. Feel free to disagree or suggest your own calculation.
While you’re crunching the numbers, I’ll just wait here and attempt to work through my hatred of Frank. Oh September, please come quickly!
*No family members or cats were harmed in the creation of this post.
Are you suffering through Droughtlander too?
What are you watching or reading while you wait for season 3?