Email
I’m not one for math, but here’s a biting number for you — 419. As in, the total number of days — at a minimum!!! — Outlander fans will have trudged through #Droughtlander before finally seeing a new episode of our favorite show. This week, Starz confirmed via EW pal Lynette Rice that season 3 will not premiere until sometime in September, thus setting into motion a collective “That’s too long! OH MY GOD WHYYYY” reaction across the Outlander-obsessed interwebs.
Starz, seemingly, has some logical reasons for the 14-month airtime hiatus. The channel needs to space out fresh programming (Black Sails, The Missing, The White Princess) in a manner that sustains it through 2017. It’s also moving Outlander to Sunday nights, prime competition time on TV that has long been dominated by HBO, so the channel needs to do it right. In addition, Voyager’s high production value boasts lengthy shoot times that must be factored in, although our OCB resident expert and screenwriter, Holly, offered a compelling argument for how they might accommodate for that by splitting the season into two, ala season 1.

Intellectually, we get it… sort of. But emotionally? Not so much. With nearly seven more months (*gasp*) of Droughtlander still ahead of us, one major question (beyond the obvious HOW WILL WE SURVIVE?) keeps rattling through my brain. What is Starz going to do to help already fatigued fans through this dismal time? If they’re listening (and I hope they are), I’ve got some thoughts.

To date, Starz has offered little-to-no satiation in the way of, well, anything. Virtually no season 3 trailers, teasers, production vignettes, official production stills, you name it. Instead, we’ve resorted to lapping up every casting update or production nugget (goat food, as fellow writer and pal Anne Gavin put it) tossed our way in a fashion somewhat akin to an excitable farm animal at morning feedtime. It ain’t pretty, but can you blame us? Right now, Starz is making us feel like one of the lovestruck gals in He’s Just Not That Into You.

For a show that’s reliant on an intensely passionate and loyal fandom — both online and off — and a network that launched an entire marketing campaign (remember #Obsessable?) paying homage to our lovably crazy behavior, you’d think they could throw us a bone. Sure, every now and again we get Sam Heughan and Caitriona Balfe’s playful banter via live social media chats and canned videos (like this most recent one), but they’re more like a mirage amidst the unending desert. 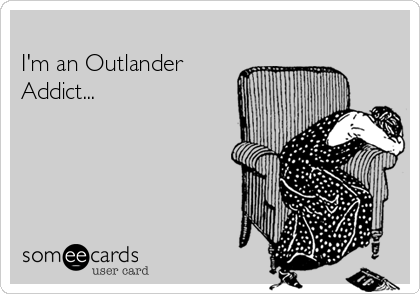 In contrast, when we’re in season, each week we’re encouraged to stick around once the episode ends so we can go into “the World of Outlander.” Ron D. Moore narrates us through the production magic that went into key moments we’ve just seen and makes us feel, well, special. But why are those moments reserved just for episodic vignettes?

Let’s just assume for a second that we’ll get a season 3 trailer sometime in this lifetime the near future. Even so, that doesn’t have to be our ONLY source of behind the scenes satiation. Trailers aside, Starz could — and should — run a well-integrated “World of Outlander” campaign in and out of season, creating original content leveraged in a multi-faceted approach that reaches thousands — if not, millions — of fans. And unlike what your conservative mama may have preached to you about sex, people WILL still buy the ice cream truck if you give away the treats for free. 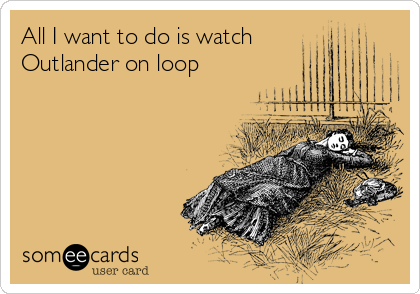 Starz refusing to release anything while in production is especially annoying since it already did this before, way back in season 1 before it realized what a world-wide phenomenon the show would be. For example, remember when it offered us that adorable video of Annette Badland describing what it took to create Mrs. Fitz’s kitchen in Castle Leoch? It dropped on Outlander social channels during the mid-season break of season 1, generating smiles across the fandom during our first #Droughtlander. The video was short, simple, delicious and, most importantly, effective.

The BBC does it right. BBC’s Poldark — that show that fills our Outlander-devoid time — treats its devoted fandom to sneak peeks into the production process, regardless of whether they’re in or out of season. I am well aware that plenty of cult fandom shows (The Walking Dead and Game of Thrones come to mind) leave fans in the dark for months, but Outlander doesn’t have to follow this lead. Be better than those shows. #BeLikePoldark 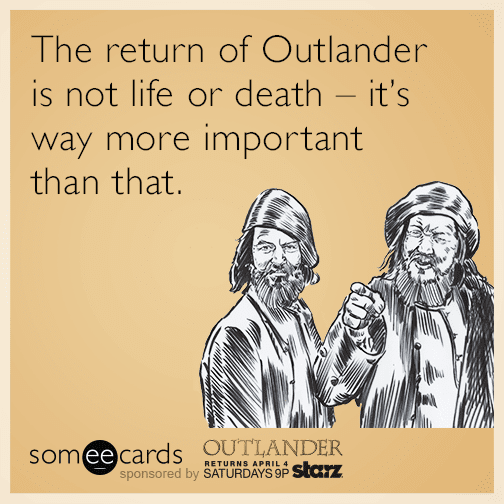 In the PR world (where I spend most of my waking hours), campaigns are planned using the PESO (paid, earned, shared, owned) model approach to channel engagement. In the case of Outlander, I’ll break down some examples: paid (advertising via billboards, digital, TV), earned (publicity using cast and crew), shared (content pushed through social using dedicated hashtags), owned (packaged videos and photos). Campaigns should utilize a combination of any of the four to be highly effective and measurable. Looking at those collectively makes you realize just how lax Starz has become in delivering credible and noticeable marketing and PR efforts these days.

We live in a highly digital, instant gratification-driven world where information is shared at lightning speed. On average, 6,000 tweets are sent EVERY SECOND. It’s no wonder that digital will finally overtake TV in ad spending this year. But when it comes to highly shareable content that can meaningfully influence behavior, as it turns out, sometimes the best things in life are free. To put it bluntly, we are a cheap date FREE PR.

Outlander fans across the globe band together EVERY SINGLE DAY to gab about Outlander through hundreds of online networks (like our Outlander Cast Clan Gathering). We hungrily eat up anything offered on dedicated blogs (like ours, that humbly boasts 2.2 MILLION readers), fan websites and social channels before — and pay attention, because this is the important part — WE WILLINGLY SHARE IT via our own networks and social channels because we love the show so damn much.
So yes, we are a demanding bunch… but what a problem to have! We are the best unpaid channel Starz could ever hope for when it comes to sustaining existing fans and creating new ones and, quite frankly, we’ve proven this through word of mouth and our immense engagement on social channels.
In short, we ARE the Outlander influencers, so I encourage Starz to harness it responsibly and respectfully. In the words of the beloved Mrs. Fitz, we need something that’s a bit… well, a bit more. Help us to help you, Starz. 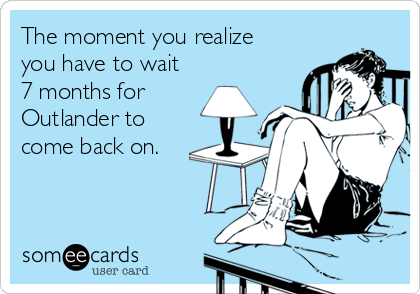 Do you think that Starz could offer fans more during Droughtlander?
And, how do you plan to survive 6+ more months until the premiere?