In Diana Gabaldon’s Outlander, It’s a Matter of Trust

Diana Gabaldon makes reference to “trust” more than 60 times in the first two books of the Outlander series alone. (Trust me, I used Kindle Search to count.) It appears in all manner of references, like this simple-yet-powerful declaration Jamie makes to Claire in Outlander:“I decided to trust you instead.”

Considering that trust is defined as a firm belief in the reliability, truth, ability, or strength of someone  – could it be the secret ingredient in the Outlander series sauce? From the start, Ms. Gabaldon gains our trust as we eagerly embrace her sci-fi, romantic, historical, adventuress genius. She reaches into our chest, grabs our heart and holds it in her hands, pulsing and throbbing, as she takes us along on Claire’s implausible, magnificent journey.

Using not only the actual word “trust” but an Outlander lexicon of related words and phrases (like vow, truth, between us, believe, Faith), Ms. Gabaldon intertwines the relationships of our cherished Claire and Jamie – both their own special bond and the relationships each has with a host of others. Besides the trusting relationship that is built between Jamie and Claire, there are so many delicious and, yes, sometimes deeply disturbing ones. But which, if any, can pass the “trust test?”

As described in the the DVD collection, Ms. Gabaldon’s Outlander “triangle in time” relationship between Claire, Jamie and Claire’s forlorn husband Frank, and the twisted one they “share” with Frank’s ancestor, the dastardly infamous British officer Black Jack Randall, is epic. It yanks us in just as Claire is pulled through the stone to another time and life. 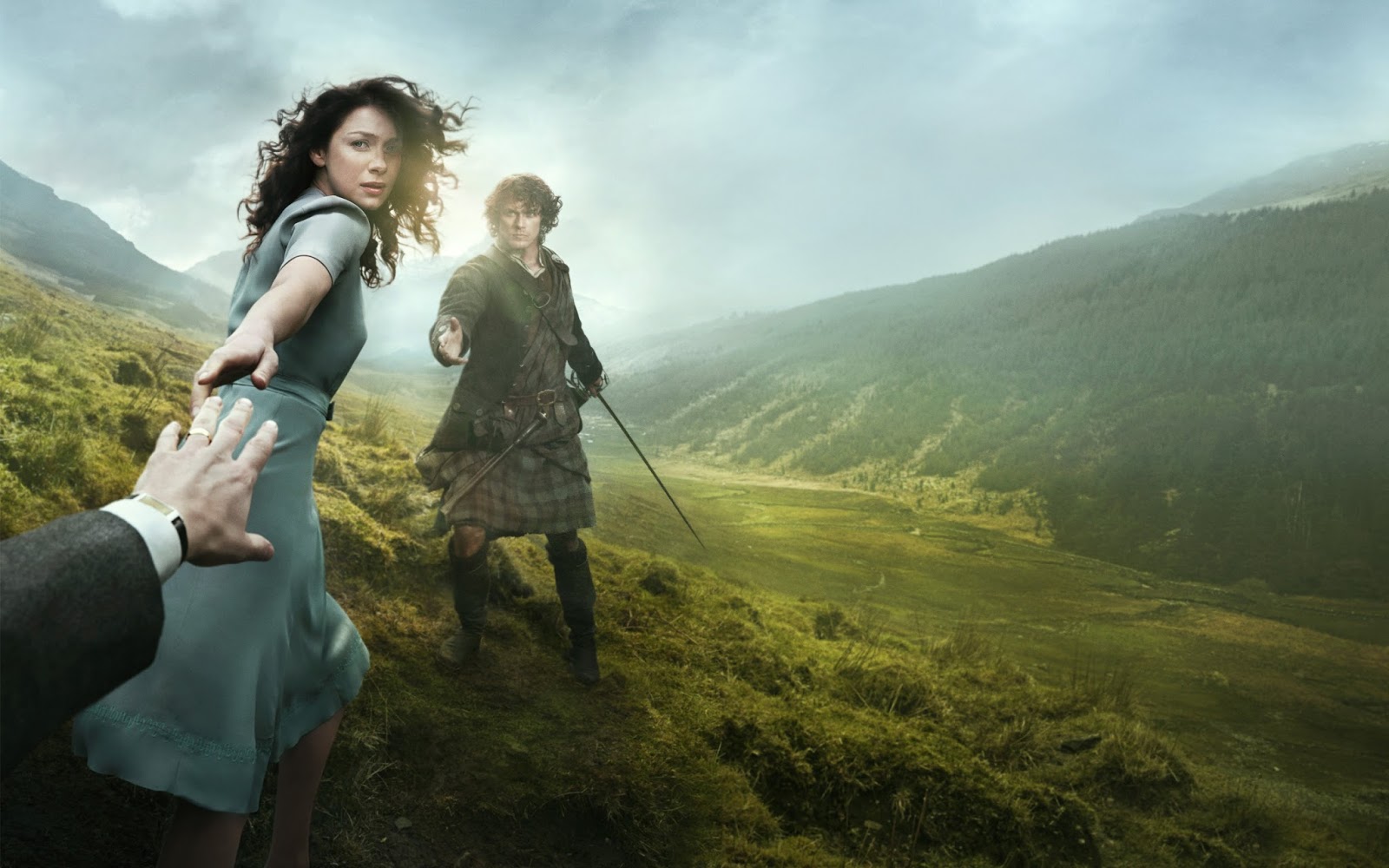 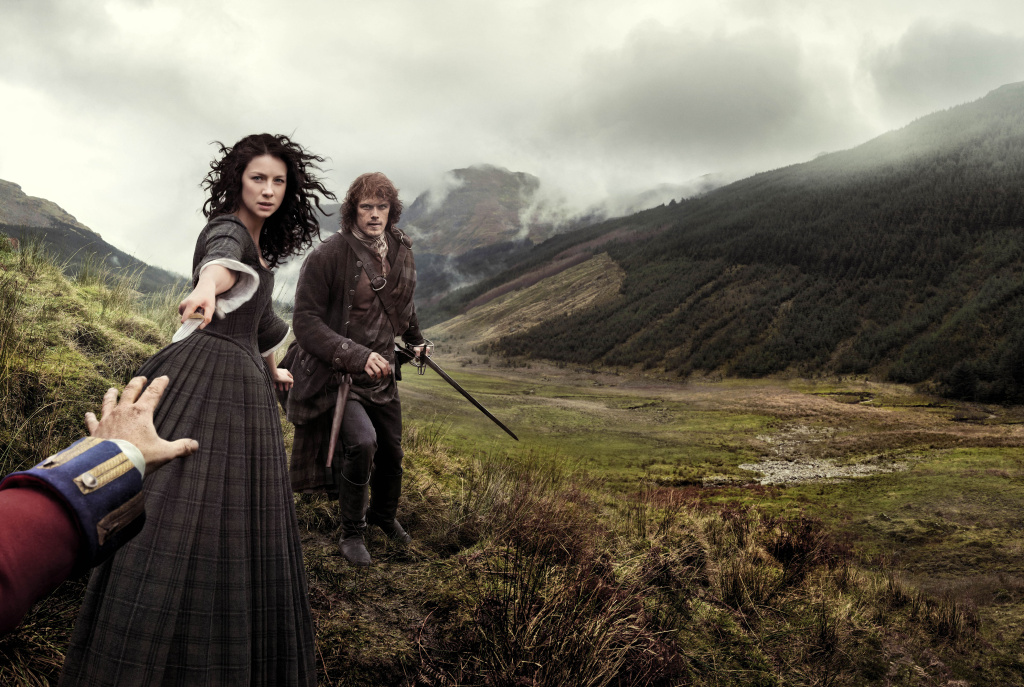 So much tragedy and comedy, gratitude and resentment, trust and distrust warrants multiple blog posts. Instead, let’s focus on relationships Claire and Jamie have with other characters. Hmm, let’s see who we have, and how they fare in my trust-focused brain.

Some of these bonds are based on trust while some are unwelcome or are bonds of necessity actually rooted in mistrust, but essential nonetheless. Well, I’ll just have to pick from those with promise by using a highly scientific method to make the final choice – pinning the tail on Fergus’ donkey.

The two particular relationships essential to the Outlander story that get to the heart of the matter – trust – are Claire & Master Raymond and Jamie & Murtagh. 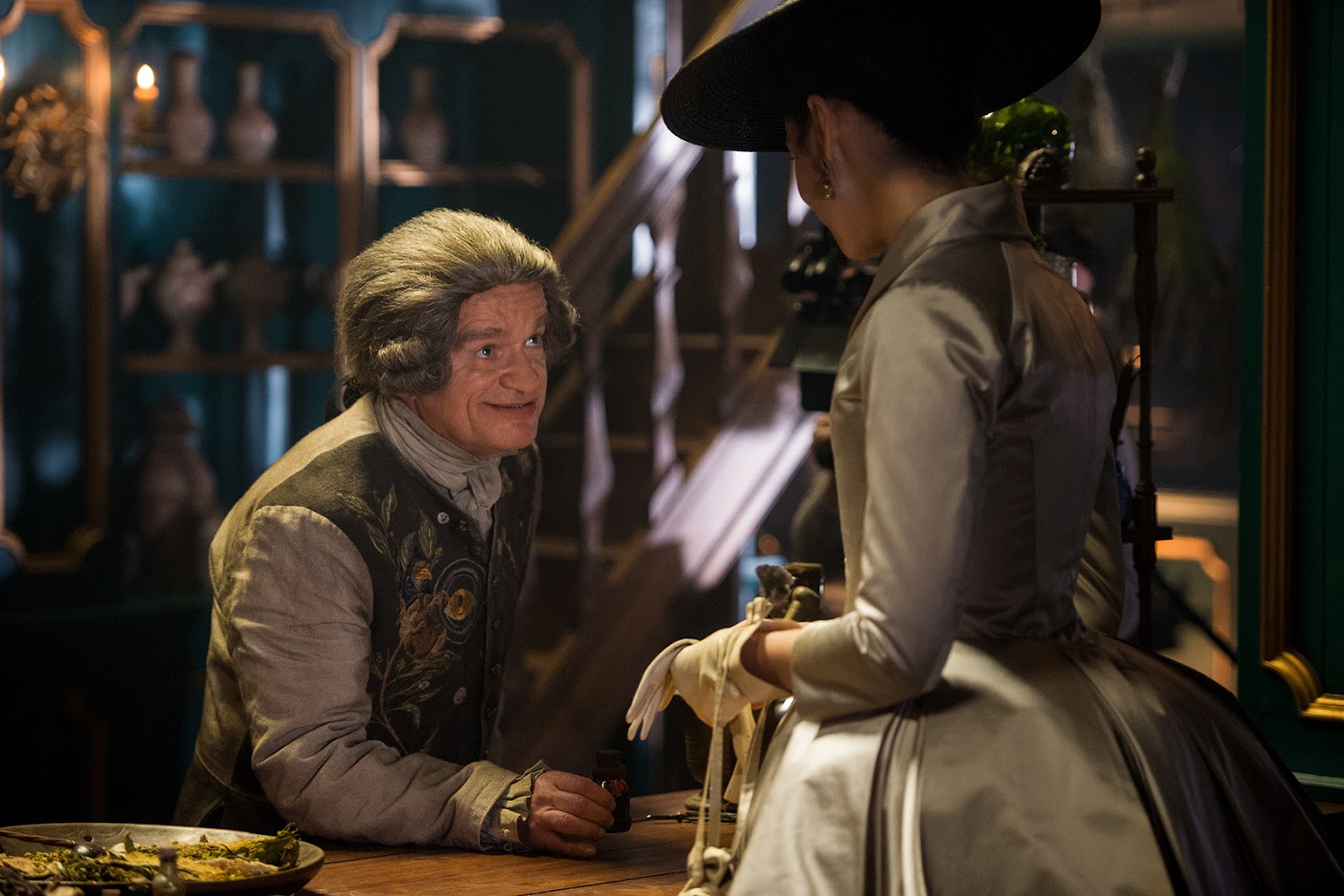 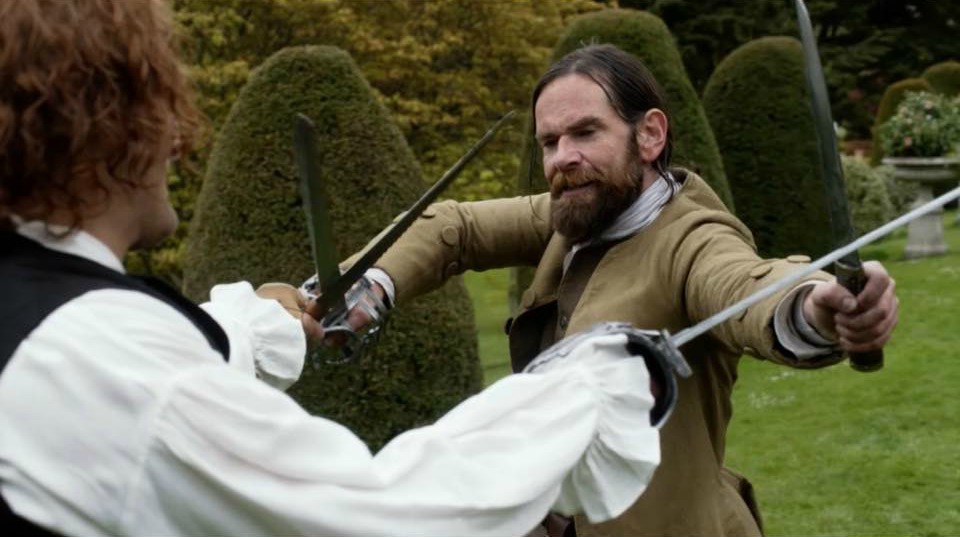 These relationships are based on vastly different bonds, yet there are common elements shared between them. The characters are truthful with each other; even in the absence of the whole truth and nothing but the truth, they do not lie to one another. Both relationships are mutually beneficial; each character benefits from the fealty and loyalty of the other. Within each duo, the characters are mutually respectful; each character has a deep and abiding respect for the other. The characters, and thus, the relationships, are imperfect; as Diana imbues her larger than life characters with human faults like the rest of us, we love Claire, Jamie, Murtagh and Master Raymond, and their relationships, even more.

Take healer Claire and apothecaire Master Raymond, for instance. Master Raymond was no prince in deeds and even less so in looks. He was an equal opportunity apothecaire, not necessarily discerning of his patron’s associations or character when selling his knowledge and concoctions.Their alliance develops quickly, from their very first meeting in his shop, and their shared knowledge and common enemies helps shape their bond.

Master Raymond eventually becomes one more in the long line of those who watch over and rescue Claire when she is in over her head. He warns her of danger and gives her a powerful crystal to help protect her from poison even after she first accuses him of conspiring to poison her. 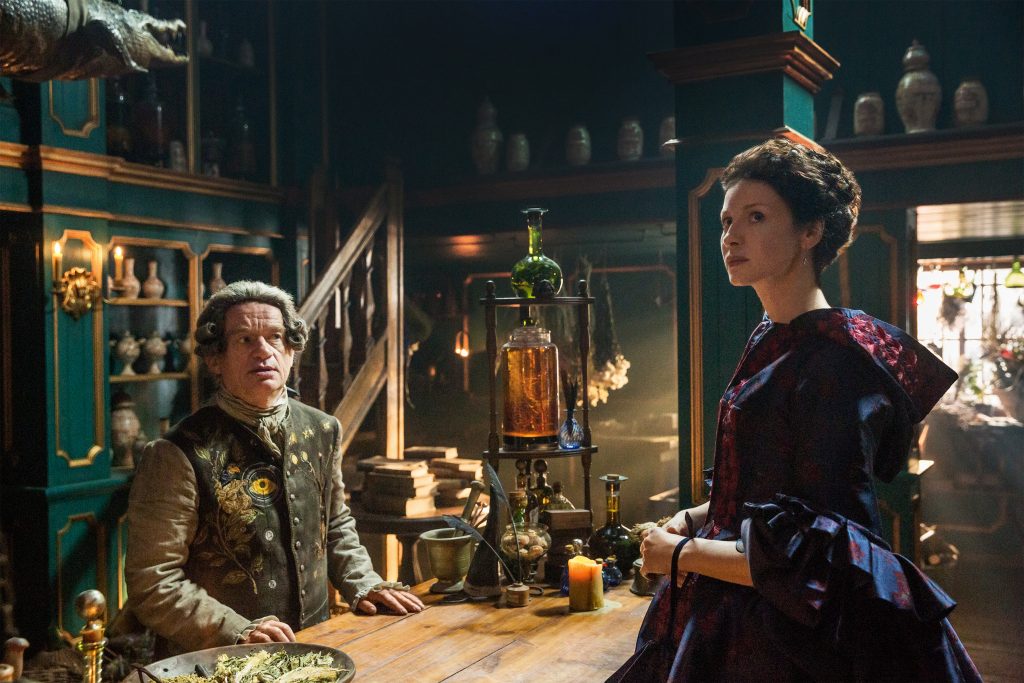 Master Raymond is the one who, in a round about way, introduces Claire to Mother Hildegard of the L’Hôpital des Anges when he suggests Claire’s skills may be of use there. A heretic according to Mother Hildegarde, Master Raymond pays Claire the ultimate mark of respect, however, when he risks his own life by going to her in the hospital after her heartbreaking loss of stillborn Faith. Without his intervention, Claire would likely have succumbed to the puerperal fever. Forever grateful, would there ever be an opportunity for Claire to return the favor? Ah, yes! Through the use of her own skills, she saves the day when King Louis would have both Master Raymond’s head and that of Comte St. Germaine. That Master Raymond chose to avenge Claire by poisoning the Comte was exquisite icing on a luscious layer cake, laced with revenge. 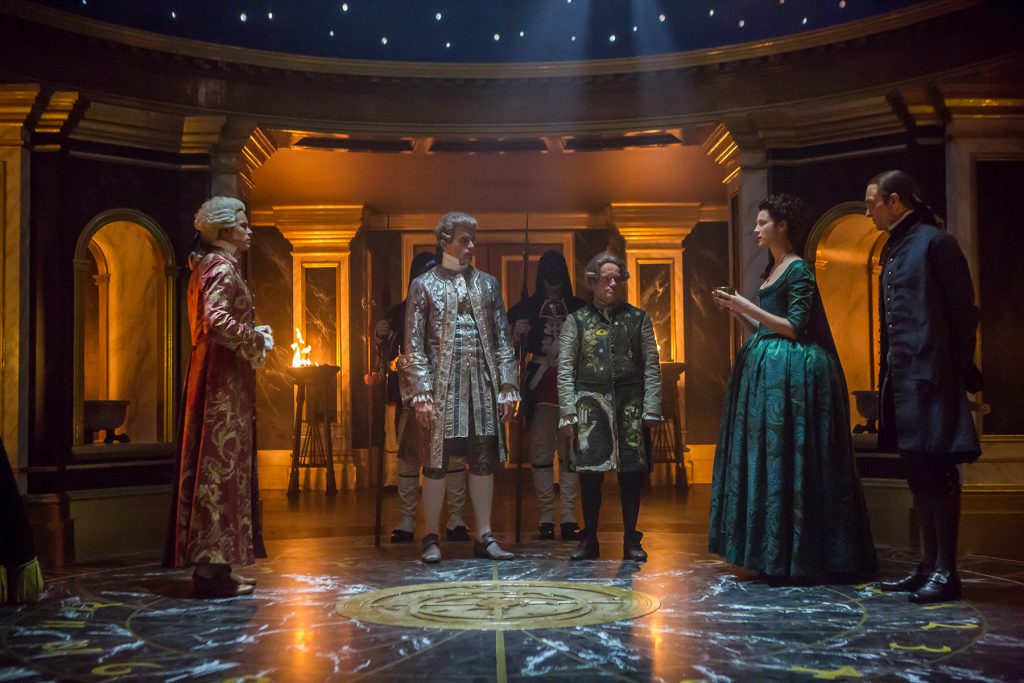 At this point, Claire and Master Raymond are besties for life or, as fellow writer Janet Reynolds dubbed him, “Claire’s anchor in this roiling sea.” Claire acknowledges it in a heartbreaking-yet-delightful manner when Master Raymond is banished from France and led away by the King’s men, and she muses, “I’m going to miss you most of all.”

Now to the relationship between Jamie and Murtagh, the wingman of all wingmen. The two are related, but we can see their bond is more like that of a father and son. Wait, might Jamie actually BE Murtagh’s son? I think not. Jamie’s mother was likely a true lady and I believe Murtagh simply shifted his unrequited love for her to her son. 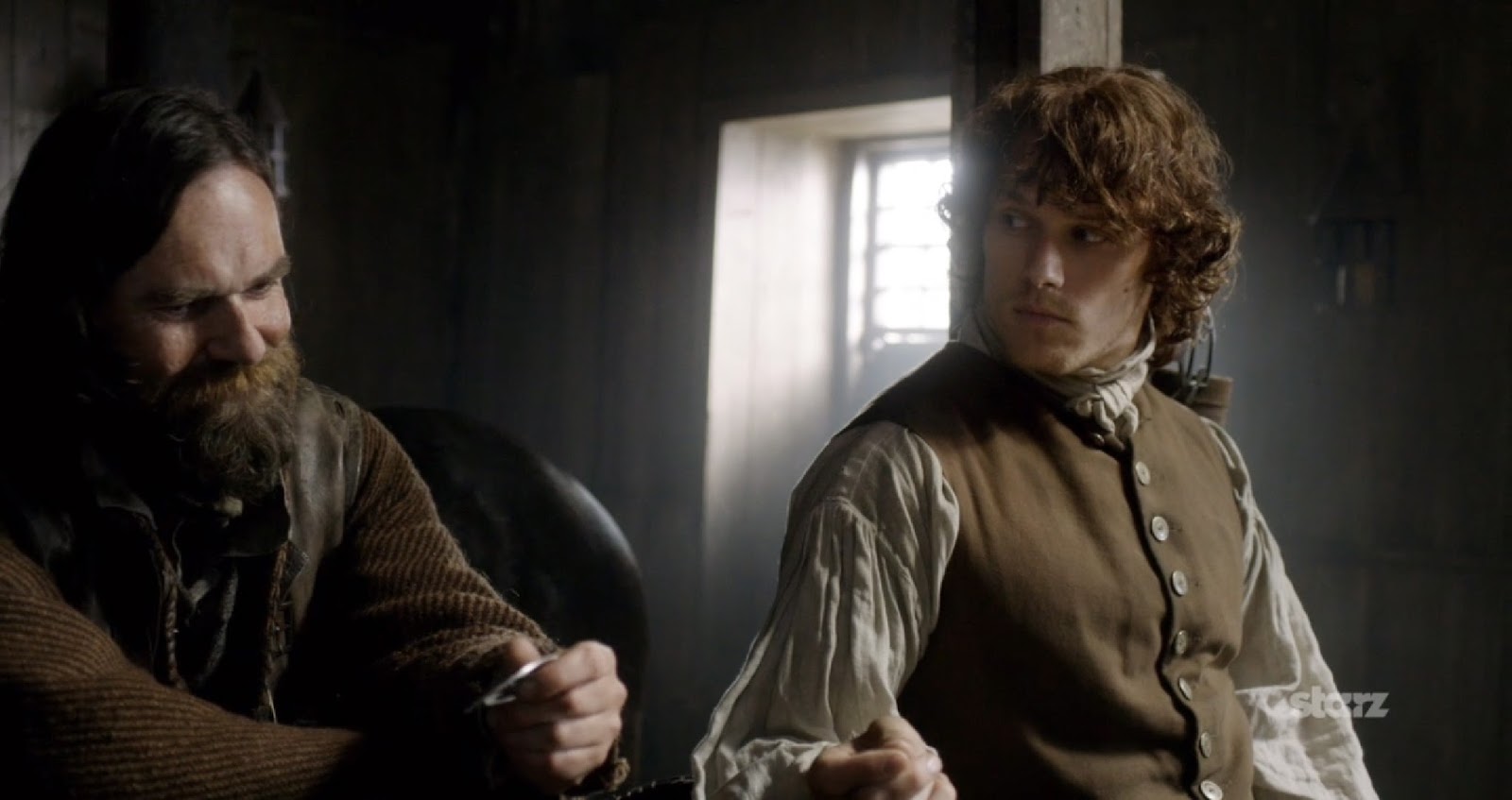 Murtagh is a quiet force who is always there, whether it be at the head of the line when a rescue is needed or right by Jamie’s side for all of the scrapes and skirmishes he finds himself in.

During the time Claire and Murtagh spend together – performing across the countryside in an attempt to find Jamie, trying to free him from prison, and then trying to help him heal – we see that Murtagh comes to love Claire as well, both organically and as an extension of his love for Jamie. If we weren’t in the Murtagh camp by then, that certainly clinched it. 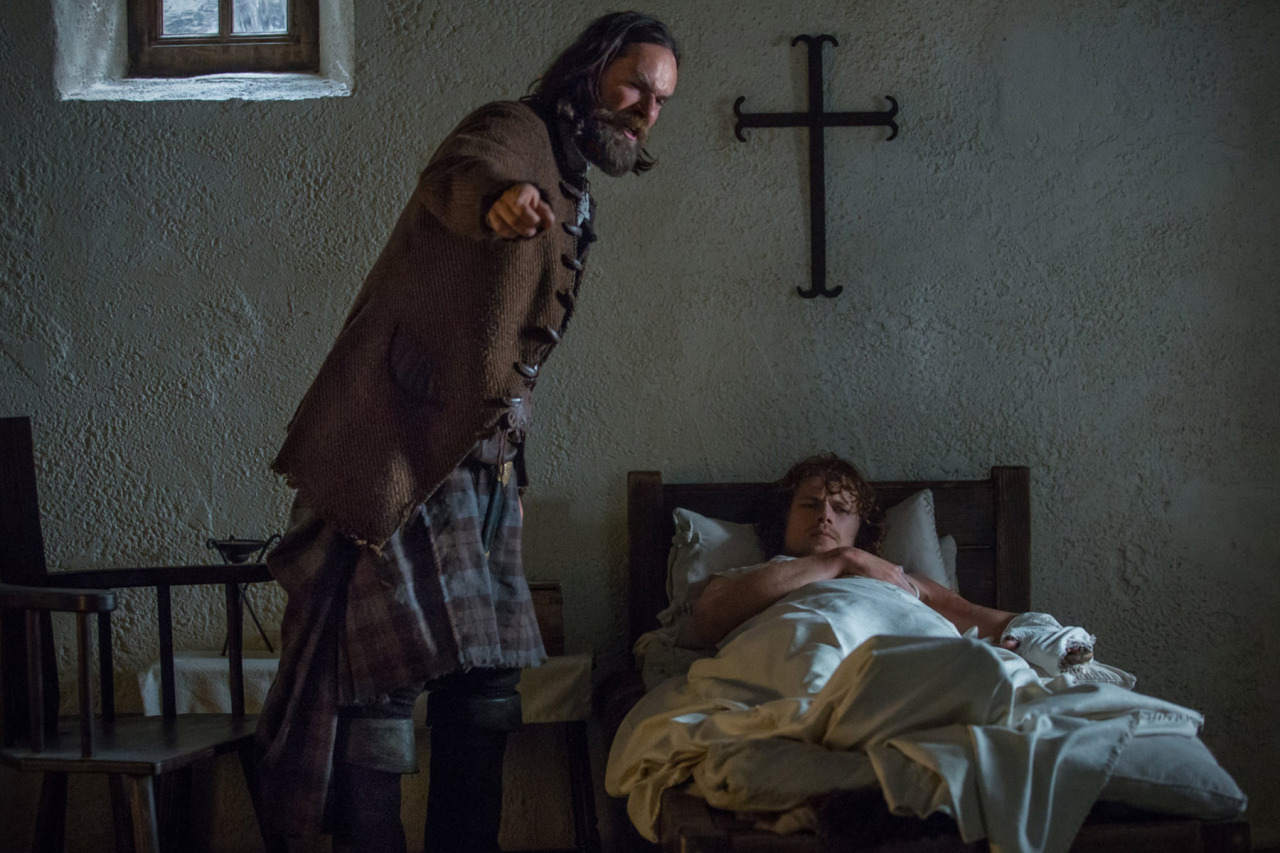 It could be construed that Murtagh is left out in the cold, that it is a one-sided relationship with Jamie reaping all the benefit, but I don’t think Murtagh would see it that way. Jamie gave him what Scottish Highlanders hold dear – respect and trust – and Jamie had Murtagh’s back as well.

Like Jamie, Murtagh gets it done. He can remove and replace a wax seal on an envelope with the best of them and, as Sandringham should have learned before it was too late, Murtagh keeps his promises. And does he ever. He does his best, albeit begrudgingly, to fit into Parisian society. He even forgives Jamie for not telling him the whole truth. 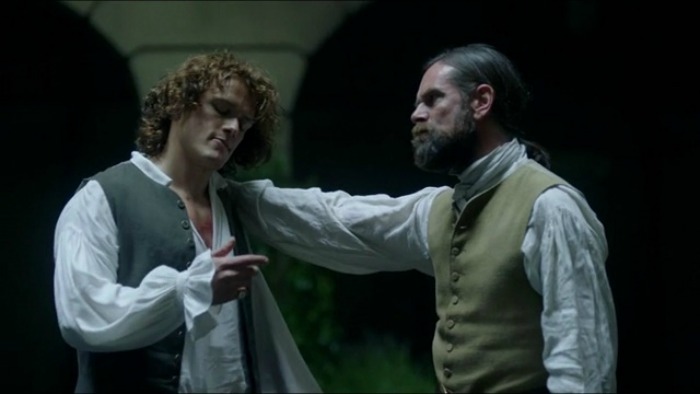 Because he believes in Jamie, impatient, taciturn, selfless, loyal Murtagh trains the Fraser clan for what he knows is likely a lost cause – the Battle of Culloden. And, when the inevitable happens, Murtagh vows to stand there with Jamie, to the end. Jamie’s mother Ellen would have been proud of them both.

These two relationships most definitely pass the trust test. Would you agree?

Stepping out of the story, there’s another significant Outlander relationship many of us have in addition to the one with Ms. Gabaldon – the one IRL between us, the viewers, and the actors who bring Claire and Jamie to life in the TV series, Caitriona Balfe and Sam Heughan. Despite our grumbling on social media, we Obsessenachs who worship the Outlander creator and her brilliance will forever be in debt to her, to Ms. Balfe and Mr. Heughan, and to everyone involved in adapting Outlander for TV, most especially Ron D. Moore.

I’d like to share that IRL, the one person I have absolute faith in is my husband. I wouldn’t trade our 40+-year imperfect, glorious relationship for anything in this world. Because, with us, it’s always been a matter of trust (loving nod to Billy Joel).  Having him in my life certainly made it feel very applicable and real to explore the theme of trust in Outlander – a show he watches alongside me because he trusts me.  Win-win, right?

“Doesn’t it make you feel a bit nervous?” I asked as we went up the stairs. “Never being able to trust anyone?” He laughed softly. “Well, I wouldna say anyone, Sassenach. There’s you— and Murtagh, and my sister Jenny and her husband Ian. I’d trust the four of you wi’ my life— I have, for that matter, more than once.” – Claire and Jamie
Do you have someone you’d trust wi’ your life?
Do you agree that trust is an integral, recurring theme within Outlander?