Take a walk with us through the history of Blackness Castle, aka Fort William, in this installment of Outlandish Locations.

Scotland essentially serves as its own *character* in the Outlander  saga. Accordingly, the television series has showcased many of the country’s finest historical locations prompting thousands of visitors to flock in record numbers to visit. It’s called the “Outlander Effect” by those in the tourist and hospitality industry in Scotland. We like what we see on screen, but what do we really know or understand about the importance of these locations or the role they played in the history of Scotland?  We at the Outlander Cast Blog thought we would help out by bringing you a new blog series highlighting the history and the lore of Outlander filming locations around Scotland. We start with Blackness Castle, used as the gloomy and foreboding “Fort William” and also known in modern times for its unexplained paranormal activity. Catch the history bug and get ready for a few ghost stories as we explore this Outlandish Location.

The courtyard of Blackness Castle is a grim one. Mounds of natural rocks protrude unevenly, making navigation awkward as you walk between the North and South Towers of this imposing structure. The exterior of the castle itself juts precariously into the Firth of Forth. It’s not hard to imagine the castle’s checkered past used alternatively over the centuries as both a prison and a military fortress. It therefore is the perfect stand-in for Diana Gabaldon’s famous garrison, where Jamie Fraser and his nemesis, Black Jack Randall, had several epic clashes during the first season of the  Outlander  television series. Blackness was seen again in Season 2 when Jamie and Claire Fraser’s adult daughter, Brianna, visits the castle with her Scottish suitor, Roger Wakefield (Mackenzie). Roger was right when he stated that a lot of blood had been spilled in that courtyard as for most of its history Blackness Castle served as a ruthless prison for religious rebels known as “Covenanters.” 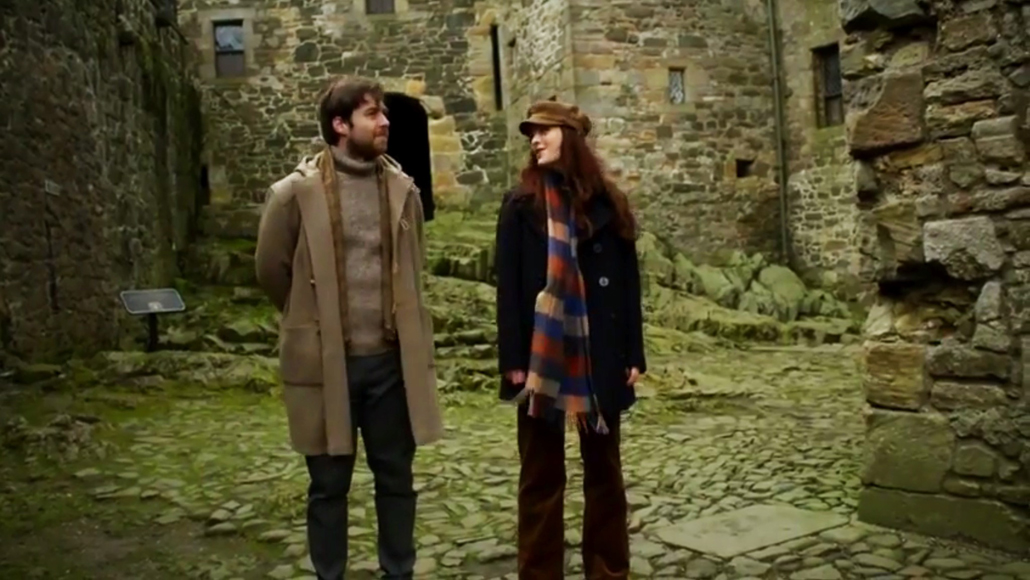 During the “Killing Time” in the 17th century, thousands of Covenanters were executed during this period of political and religious upheaval. The Central Tower remains the oldest portion of the castle and is where prisoners of high nobility such as the Covenanters were incarcerated. The most famous prisoner was probably the Archbishop of Saint Andrews, David Beaton. Other less fortunate prisoners were assigned to the North Tower — and subject to the cruelty of the “pit prison” where high tides from the seas would flood the pit several times a day. As we explore the colorful history of this foreboding and fascinating fortress, you’ll begin to understand why it makes the perfect setting for Outlander’s Fort William. 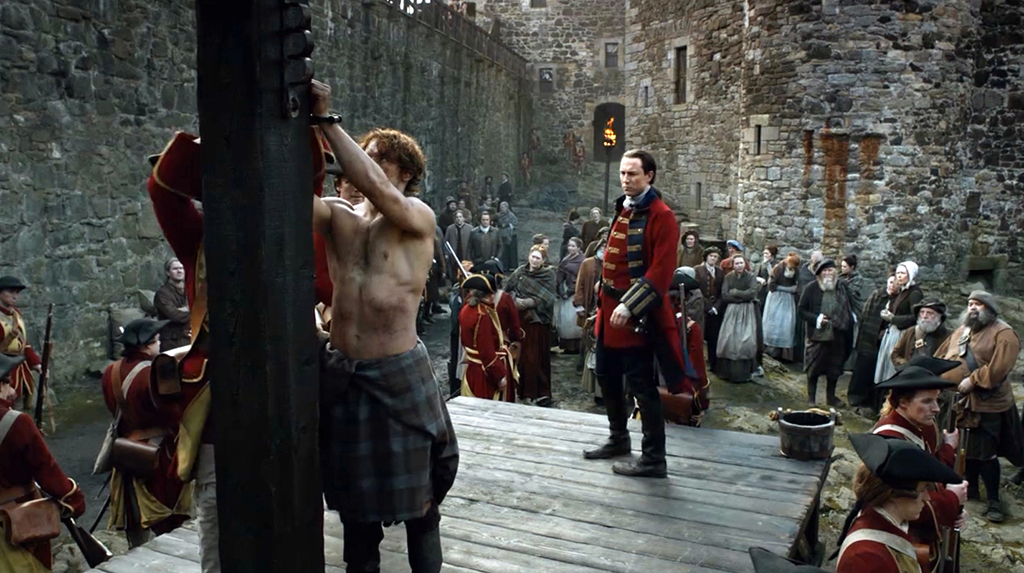 Blackness Castle’s origins go back to medieval times. It sat alongside the port of Blackness, which served the Royal Burgh of Linlithgow. Linlithgow was one of the main residences of the Scottish monarch and best known as the birthplace of Mary, Queen of Scots. Originally built as a residence for one of Scotland’s most powerful families — the Crichtons — in the 15th century, the castle went on to serve many roles. One of the most unique aspects of the castle is the structure itself. The long, narrow shape of the castle and the way it juts into the forth, makes it appear to look like a ship run aground. Hence its nickname — “the ship that never sailed.” The North and South Towers stand between the center courtyard and are often referred to as the “stem” and the “stern” where the Central Tower was referred to as the “mast.” 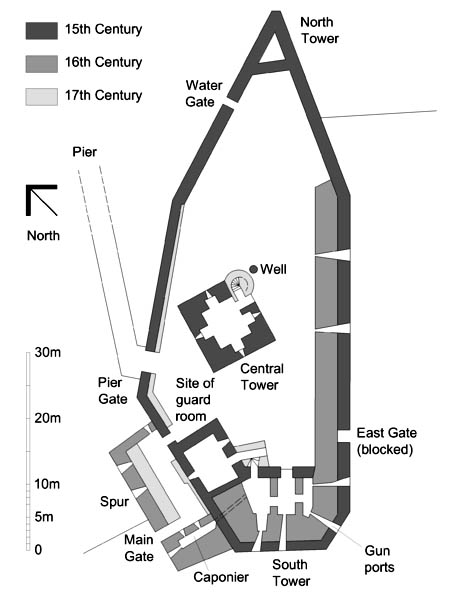 Plan by Jonathan Oldenbuck
It’s appropriate then that the Castle stood watch at the seaport village of Blackness. Also fitting is that one of its earliest uses was as a massive garrison stronghold. In the mid-1500s, James V converted the castle residence into an artillery fortification. James was motivated by the looming threat from Henry VIII’s Protestant England. Any enemies approaching from the land met with the giant impenetrable mass of the “stern” stone tower and cannons fired through great gun holes. The South Tower walls were strengthened to produce a wall 5.5 meters thick and pierced at several places at ground level to allow artillery to fire south and southeast. At the time, Blackness was a model of technological artillery innovations, including its complex entrance known as a “caponier.” The caponier was a passage within the external wall of the entrance that would allow the castle defenders to fire into the entrance area just in case any of the invaders made it past the castle gate. The caponier at Blackness is one of only three surviving in Scotland. Others exist at Stirling Castle and Craignethan. 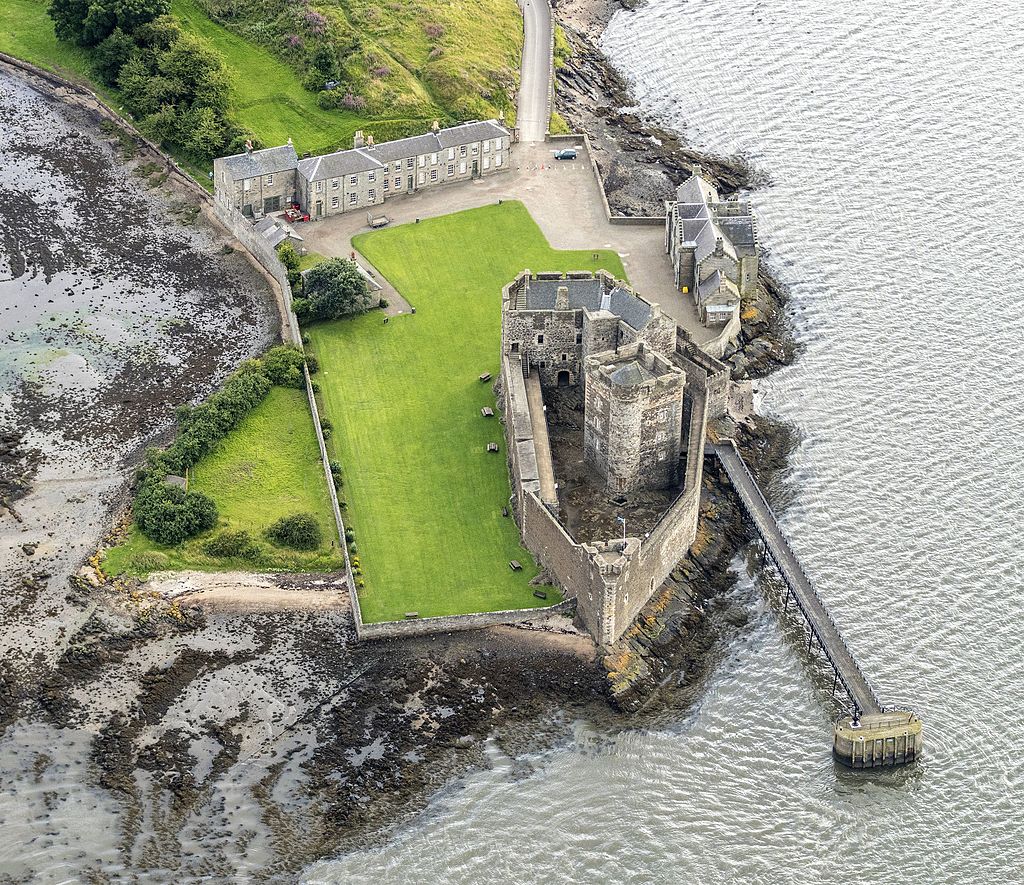 The castle also played a notable part in the Marian Civil War in Scotland, which followed the forced abdication of Mary, Queen of Scots. Blackness remained loyal to the dethroned Scottish Queen until the Castle Keep decided to switch sides, whereby the castle fell into the hands of James Stewart, the First Earl of Moray and the illegitimate son of James V. Supporters of Mary later assassinated Stewart. Blackness was briefly reclaimed for Queen Mary but soon after captured once again. Unfortunately, as warfare technology advanced, the mighty Blackness finally succumbed to the heavy artillery advances of Oliver Cromwell’s Scottish campaign in the mid-1600s. Attacked from both land and sea Blackness suffered serious damage. Over the years, the castle was repaired and restored to its original medieval look and then eventually designated as an ancient monument in the 1920s. 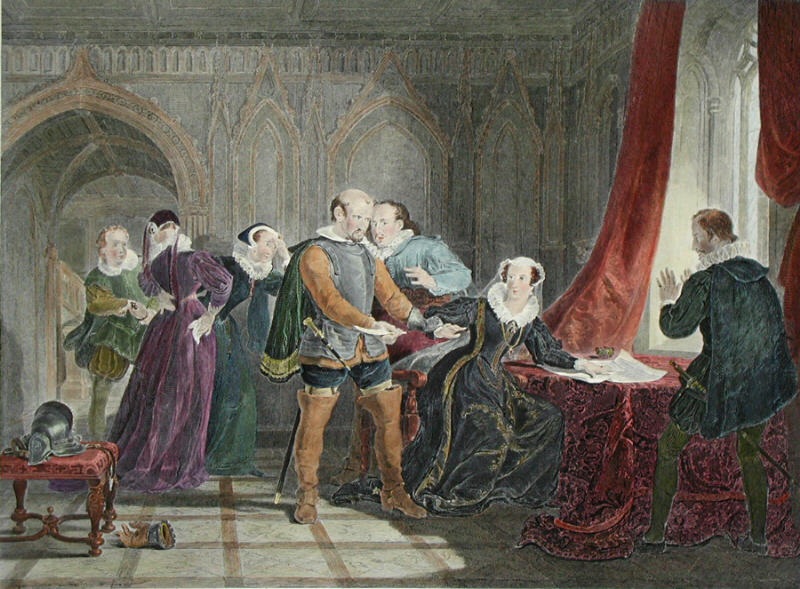 Abdication of Mary, Queen of Scots
Ghosts of Blackness

A true work-horse of a structure, Blackness multi-tasked throughout its history as it served many roles, most of which involved death, destruction and other of life’s less joyous occasions. Not surprising, then, that the Castle has been dubbed one of Scotland’s most haunted castles. The most famous occurrence of paranormal activity stemmed from the account of a visitor in the late 1990s who was startled to see a knight dressed in full armour in the Central Tower. Over the years, accounts have emerged from visitors to the castle who have heard objects moving about on floors above or below with no logical explanation. Most recently Outlander visitors have experienced some unexplained activity. In the summer of 2015, Catriona Stevenson of Sláinte Scotland Tours, brought a young American guest to Blackness. It was just prior to the explosion of Outlander visitors (as a result of the Starz television series) so visitors that afternoon were few. In fact, only Catriona and her guest and another couple were in the castle that day. As Catriona explains it…

“As we were in the central tower, we started hearing noises from the room above us. Thumping or maybe footsteps as if someone was walking around and enjoying a visit. (We were on the 3rd floor). I joked and said that no one could be up there, however, the noises were obvious thumps along with a dragging sound. We went to the next floor and yes, no one was there. No noises at this point so I said whomever was there must have gone up to the roof. As we walked up the stairs to the roof, no one passed us coming down and I saw from the top the other visiting guests were still quite a distance away in the North Tower, so it could not have been them. So, I thought there must have been someone else here and we missed them going down while we were still in the room. On the way down, as soon as we passed the 4th floor room, the noises started again. That is when my guest said…LET’S GET OUTTA HERE!”  And we did.”

Similar occurrences happened to Catriona and her guests over the remainder of the 2015 and 2016 tourist season, but have not occurred since. There are no pipes in the building, so it’s hard to explain the obvious noises. Check out this YouTube video of Catriona and her guest’s encounter, especially at the :50 time marker.  What do you hear?
I visited Blackness Castle in the spring of 2016 but neither heard or saw anything inexplicable. However, I can attest to the overall general feeling of foreboding at the castle. It’s a dark, dank, but fascinating place. It remains a dour witness to some of Scotland’s bloodiest history. 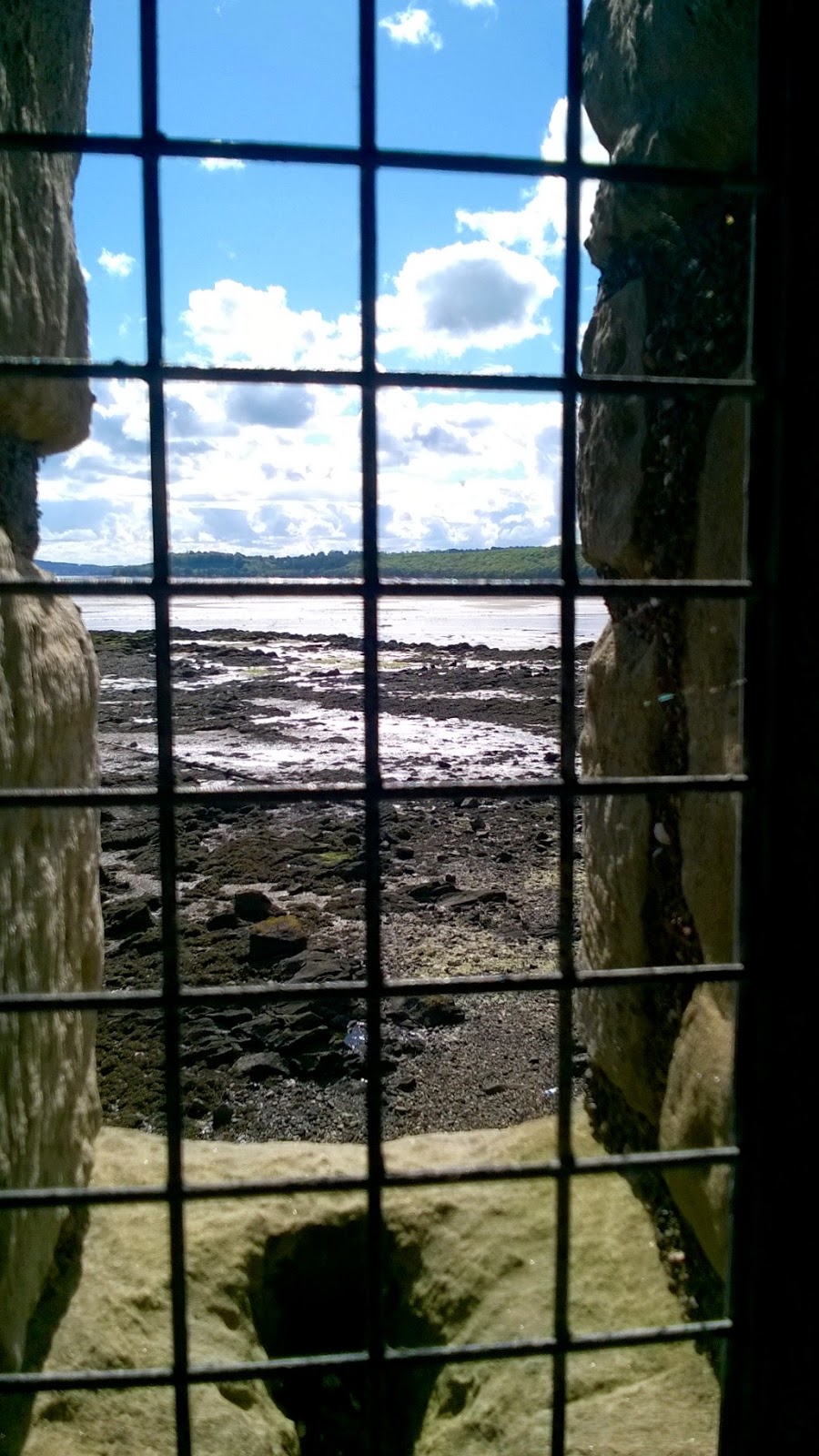 Photo by Anne Gavin
Blackness Castle is open to visitors from April 1st through September 30th every day from 9:30 a.m. until 4:30 a.m. and from October 1st to March 31st from 10:00 a.m. until 4:00 p.m., except Thursday and Friday. Always call in advance as there are sometimes unscheduled closures. The ladies that work at the Visitor Centre are delightful and happy to relay their stories of the days when the Outlander Production descended on the castle for filming. When I was there in May of 2016, the production had recently filmed the Season 2 scenes with Roger and Brianna. At that time, the castle workers were bound to secrecy regarding some of the filming details as the episode had yet to air. But, they told us just enough to get us guessing and wondering! Blackness Castle is an easy drive from Edinburgh City Centre and for hikers, also accessible via the John Muir Way trail, which passes right by the castle entrance. 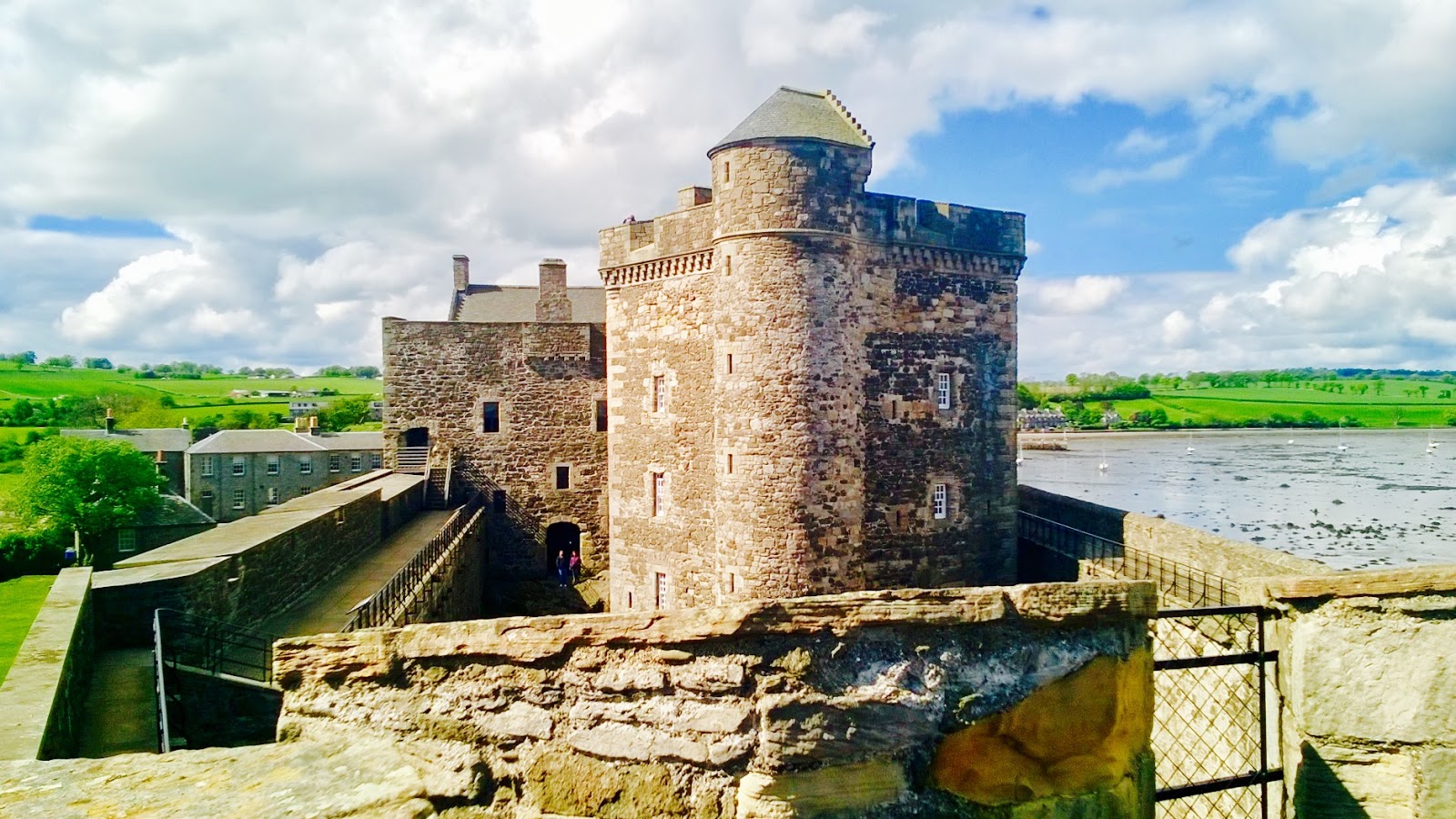 Photo by Anne Gavin
Blackness Castle proves itself more than worthy of Gabaldon’s description of the menacing and ominous “Fort William” where so much pain, agony and conflict occurred for our series’ hero and heroine. It’s a worthwhile stop if venturing outside Edinburgh. Plan for at least two hours there for the full experience, including time in the Visitor’s Centre and Gift Shoppe. And, don’t forget to listen for the Ghosts of Blackness!
Catch the History Bug and read more about Scotland’s dramatic past at Historic Scotland.

Have you visited Blackness Castle? If so, did you see or hear any unexplained activity?