Outlander Goes to the Dogs: A Look at the Breed Playing Rollo

Email
Among the favorite Outlander animals is Rollo. Learn why the Northern Inuit was a great choice to play Ian’s beloved pet.
A few weeks ago, Starz threw us Outlander  fans a bone, almost literally, by announcing the breed of dog that would be playing Rollo. Two adorable Northern Inuit puppies are already in training to become Ian Murray’s trusty canine sidekick come Outlander Season 4.

Now book readers likely have an image of Rollo in their heads, thanks to Diana Gabaldon‘s wonderfully descriptive writing. And they also likely have some expectations of how Rollo should act. TV-only folks, though, only have the cute photos leaked by Starz PR. So we decided to find out a bit more about this breed, which is so new that it isn’t even officially recognized yet by the American Kennel Club. We caught up with Sharon O’Garro, who is the first Northern Inuit breeder in North America and founder of the Northern Inuit Society of America. Here’s what she had to say about this fascinating breed.While Outlander the TV show has been a trendsetter in many ways—”By The Pricking of My Thumb?” anyone—using Northern Inuit dogs will not be this breed’s TV debut. Fans of Game of Thrones might recognize them as the trusty, formidable dire wolves.

That said, O’Garro is not surprised Outlander chose Northern Inuits to play Outlander’s most famous dog. And not just because Gabaldon describes Rollo multiple times as half-wolf. “They have exceptional temperaments,” she says. “They’re free thinking. Inuits want to please you, but they will think about what you’re asking of them.”

Which is why, O’Garro says, early training is critical. “They can be stubborn if you let things lapse,” she says. “They are big dogs. They need early socialization and early training. Other than that they are total dweebs, males in particular. Females are more aloof and more protective. The males are ‘Come on. Pet me. Anybody.’ They can get stolen [as a result of their loving attitude.] Females are more loyal [to one owner].”

O’Garro, who owns nine Northern Inuits, says they are very intelligent. “One of my dogs opens all the doors in the house,” she says. “They will take advantage of you if you are too soft. Be kind but firm. If you let them walk all over you, they will.”

O’Garro, who moved to the States from England, where the Northern Inuit breed began, to become the first North American breeder, says these dogs also make good service dogs. Her kennel donated one to a disabled vet in January, and he’s been a star in his class, she says. 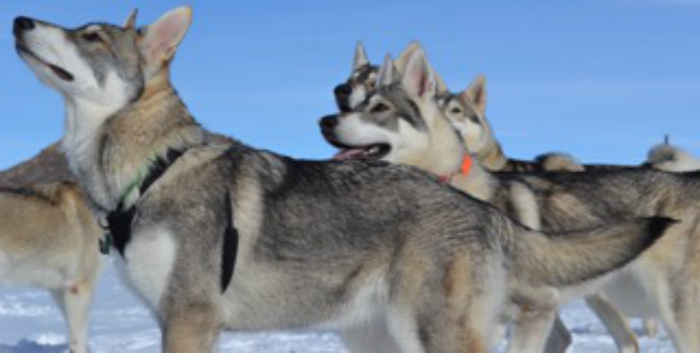 Northern Inuits are not all work and no play, though. One of O’Garro’s dogs, Nero the Hero, likes to dress up in clothes. Unlike many dogs who only grudgingly tolerate their owners stuffing them into costumes for “fun,” Nero apparently doesn’t like to take his off. “Most dogs have them on for a minute,” she says, noting he prefers superhero costumes. “He stuts his stuff around and doesn’t want to take them off.”

Northern Inuit dogs live from between 11 and 14 years, and vary in size from 75 to 100 pounds. While that sounds heavy, O’Garro says they are not meant to be heavy. “They are lean, long and lanky like a wolf,” she says.
That look is not, however, because Northern Inuits actually are half-wolf. The breed was begun in the 1980s by British dog breeder Julia Kelham, who wanted a dog that looked like a wolf. The original dog stock hailed from Canada, where it may or may not have had some wolf in its history. What is important is that the Northern Inuit is not consider a wolf hybrid or mixed breed.
It was the dog’s look, though, that literally found O’Garro pulling her car off to the side of the road after seeing someone walk the dog down the street. “I passed a lady walking what I thought a young wolf and I thought What the?,” she laughs. “I accosted her and I took her to my home to show my husband. We were looking for a dog. He wanted a German Shepherd and I wanted a Malamute. This breed filled that and then some. I fell in love.”
So in love, in fact, that she and her husband decided to move to the States to become Northern Inuit breeders. “We got our two puppies and then came to US and began grooming the dogs,” she says. “It’s like chips,” she adds of Northern Inuits. “Once you have one, one’s not enough. You’ve got to have another and another. I’m addicted.

What do you think? Is this how you imagined Rollo in your head? What Rollo scenes are you hoping are included in Outlander Season 4?