The Scotland Diaries: Waking Up in Glasgow

Editor’s note: This post is a continuation of Anne Gavin’s first post about returning to Scotland after a wonderful first visit last year. Read about why she, like Claire, had to go back. And if you want to relieve Anne’s first trip last year, here’s a link to get you started. Let the virtual travel begin!

Despite an overnight flight, I felt none of the usual haze one usually feels after a long transatlantic journey. Just the opposite. I was in Scotland again and was ready to start what I knew would be an incredible three weeks of experiences with some wonderful people and in some extraordinary places.

It had been a year since my last trip here and so much had happened in that year. Another season of life, another season of Outlander and another very joyful year writing for the Outlander Cast Blog, building new friendships. Many of these new friends I had planned to meet this trip while also renewing bonds with others with whom I share some multiple interests—Scotland being the main! But, it was all to start in Glasgow, a city I had glazed over on my last trip to Scotland but only because of lack of time. However, this trip, I knew I needed to explore this colorful city and its history and experience some of what makes Glasgow such a wee jewel. Come along with me on my trip!
The very best way to get to the heart of a place is to put on your trainers and go for a “wee wander” as my friend Dave Lawson says. Dave is from Fife —just outside of Edinburgh —and is my guide for my “wee wander” around the Isle of Arran. More on that later. But, for now, I had the whole day ahead of me, places to go and people to meet.
After checking into the gorgeous Blythswood Square Hotel, I headed out after being told that the city is essentially a large grid and almost everywhere you go can lead you back eventually to where you came from. Ummm. OK. How lost could I really get? Surprisingly, it was a warm and sunny day! I was catching the tail end of a fortnight of beautiful spring weather in Scotland. I knew the weather forecast for the majority of my trip was dire, so I knew I needed to make the best of it. I had a coffee date with a famous pair from Glasgow.

I set off down “the grid” at a brisk pace in the direction of Kelvingrove Park to meet up with one tough little Cavalier Spaniel named Oscar and his human, Steph. What a delight these two were and also a font of knowledge about Glasgow and this stunning green space. 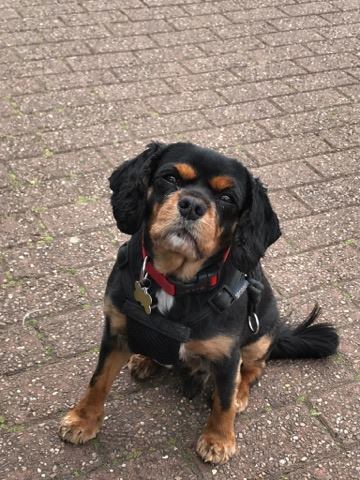 The park sits behind the Kelvingrove Art Museum and below Glasgow University. Both of these buildings are works of art themselves. We walked and walked and talked and talked. I heard the story of how Oscar went from being a country/farm dog to a city slicker and how almost everyone in any of the six Glasgow parks he frequently visits knows who he is. It’s not hard to see why. That’s one little dog with one big personality. When we happened upon some of Steph and Oscar’s friends and Steph apprised them of my obsession love for Outlander, I was shocked at one lovely lady’s reaction. She hugged me and spent several minutes talking about how much she loves the show. Unusual since so many Scottish people don’t know about or haven’t heard about Outlander. She also pointed out a few places in the park where she knew some of Season 3 had been filmed including a pub up the street, The Grove, where scenes were filmed with a certain Minister’s son. It was an enchanting start to the day with Oscar and Steph and his welcoming friends. The Outlander magic had definitely kicked in. After a quick pint at aforementioned pub, I said my goodbyes to Oscar and headed back up the grid to meet another Glasgow resident and friend of the Outlander Cast Blog.

Morag Wright, one of the New Glasgow Girls, graciously penned a guest post for Outlander Cast Blog back in March of this year. She braved Baltic temperatures at Dunure as Outlander filmed some of the last scenes filmed in Scotland prior to the cast moving to South Africa. She and I had corresponded closely about her guest post but had never met. It was such a treat to meet her, and in an eclectic little spot called The Pig & the Butterfly in Central Glasgow. As always, it is so nice to spend time in the company of another Obsessenach. We had a great time catching up and I loved hearing about her family and her dogs. Turns out we are both dog-obsessed as well!

Just as quickly as our chat flew by, I was off and back to the hotel to change and get ready for dinner. I had planned to meet up with a work colleague who I met last year on my first trip to Scotland. He and his wife and another friend of theirs I had met in the States a few months ago joined me, my fellow adventurer, Doreen, and another late add to the trip, my friend, Maryann, who decided just two weeks previous to jump aboard the Scotland train and come along for the Glasgow and Arran portion of the trip. So admiring of a person who truly embraces the “You Only Live Once” mantra!!! I knew Maryann would be a great add to the group and definitely fit enough to take on all we had planned on Arran.

The six of us had a wonderful dinner at Two Fat Ladies just down the street from my hotel. Doreen arrived late afternoon, suffering the effects of a very long trip from California. She limped into dinner and almost fell asleep in her Cullen Skink soup. But, she soon discovered a little Scotland secret. Scottish tablet is a great cure for jet lag! A couple of pieces of tablet and she was a new person! Butter, sugar, sweetened condensed milk and you are wide awake! So much so that we decided to head out for a quick night cap and my first whisky in Scotland. It was 10 p.m. local time, I was still awake and it had been a great first day!

In the morning, we met my favorite Scottish tour guide, Catriona Stevenson from Slainte Scotland, for a quick City Tour of Glasgow before heading to our Ferry to Arran in the afternoon. We started with the Glasgow Cathedral and the adjacent Necropolis. The Cathedral is truly magnificent. 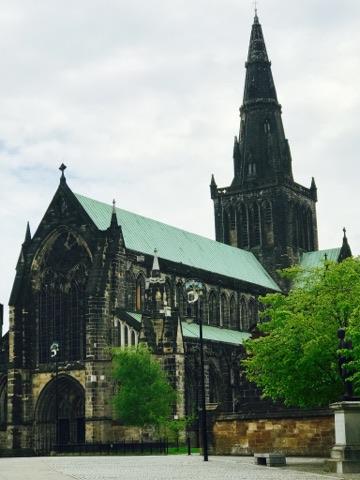 We did go downstairs to see the spot where Outlander filmed much of Episode 2.07, “Faith.” We saw the nook where Claire lay after she gave birth to her stillborn baby. What many Outlander fans may not know is that his particular nook of the cathedral is dedicated to nurses. I doubt Outlander Starz knew this either when they chose this spot to film. More Outlander magic, I suspect! 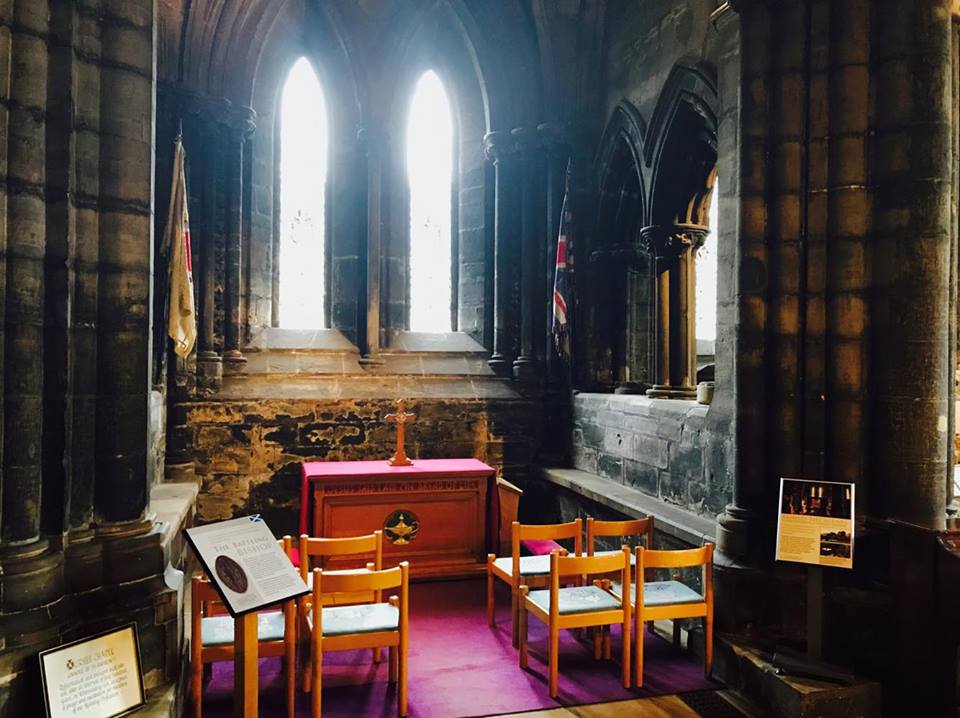 And, while we enjoyed our visit to the cathedral, it was the Necropolis that captured my attention. There is a short bridge to one side of the cathedral that takes you over to this very old cemetery, which sits atop a conical hill overlooking the entire city of Glasgow. The views are spectacular from every direction. 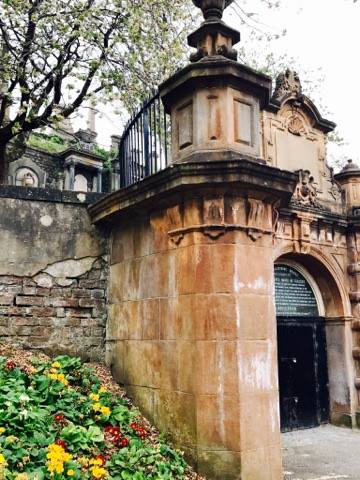 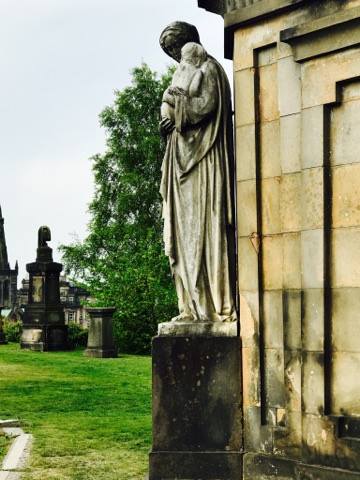 We made a large loop around, stopping occasionally to look at some of the many very old grave stones. So much history, including a stellar view from atop the hill of the Royal Infirmary, christened by Queen Victoria many years ago. It sits quite near the cathedral and looks alternately regal and slightly morose. The Infirmary—still in operation today—looks every bit the same externally as it did when Victoria opened it. Don’t judge a book by its cover, I said to myself, but hopefully the interior has kept up with the times!

I highly recommend a visit to the cathedral and the Necropolis, in particular, if you are in Glasgow and able to make the short walk uphill. On a clear day, which we had a bit of, the city views are beautiful and you might even comprehend the notion of the city grid that everyone talks so much about!

After another trek around the grid, we made our way to George Square. In Outlander parlance, it’s where Claire and Frank impulsively got married. A spacious park makes up the bulk of the square, which is anchored by Glasgow’s municipal hall. It was lunchtime, the sun was peeking through the clouds, and people and pigeons alike were enjoying the day. It was fun to see the filming location at the back of the municipal building and to note the entrance —#45—where Claire slid through the door to her life with husband #1. Outlander geek-out on full display amongst the three of us. 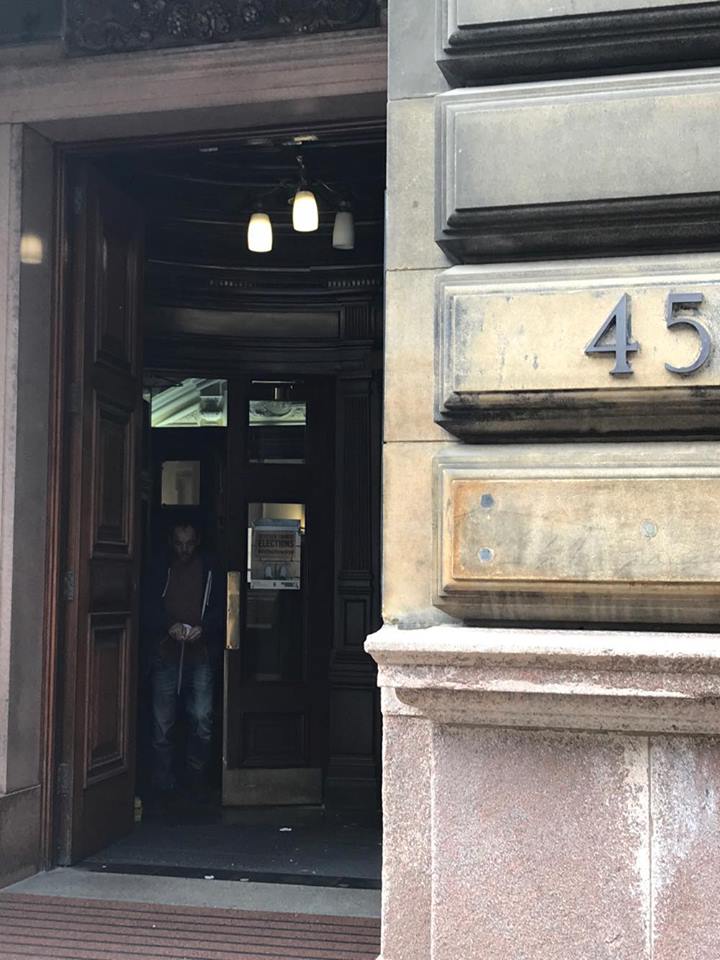 After grabbing a quick bite, we headed out of town for the ride to the ferry to Arran from Ardrossan. Doreen and Maryann were fast friends by now and it seemed as if we had been laughing and joking amongst the four of us all day. Such a serene and beautiful ride along the coastline passing many seaside towns. By now, the sun had really started to shine and in the distance, we could see Arran and its tallest mountain, Goat Fell. We would attempt to climb this mountain in a few days. Were we ready? I wasn’t sure, but there was no going back now. We said our goodbyes to Catriona and laboriously wheeled our suitcases onto the ferry for the 6 p.m. sailing. We found ourselves sitting in the “pet section” (of, course!) with a darling Italiane Spinone named Alfie who lives on the island. His humans were very friendly and talked at length about Arran and life there.

Although we dashed through this day, we saw some wonderful sites and got Catriona’s usual helping of Scottish history along the way as well. I absolutely loved my time in Glasgow. It is a vibrant town with the most friendly people. Good vibes all around. Next stop… the Isle of Arran. Not sure I am ready for it and for the physical challenges ahead, but time to take the leap… I’ll let you know how I do in my next post.

Have you been to Glasgow? What was your favorite part? 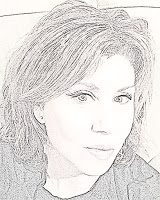