anxiety of being jamie fraser

In “A. Malcolm,” the Outlander production team gave insight into the anxiety of being Jamie Fraser and what might have weighed on his mind during his reunion with Claire.

I haven’t been able to let go of Outlander episode 6, “A. Malcolm.” I usually watch, repeat, maybe repeat (again) and then move on until the following week when I do it all over again. This time around, I conducted my ritual and I just couldn’t let it be. It left me unsettled for reasons that I couldn’t explain until now.

When I read the books, I imagined the print shop and the brothel scenes as a joyous reunion of spirits (and flesh too). I envisioned Jamie and Claire both beaming at each other through salty kisses and warm embraces. As I replayed the episode, I realized that I had seen it all through Claire’s eyes. Of course Claire was happy. She planned this trip. She knew, or at least hoped, that Jamie would be her final destination. She even brought things from her new life to share with him.

There was something missing in the televised version of this reunion and it was James Fraser’s spirit. Jamie had already spent most of his life protecting those he loved. He gave up his wife and child to see them safe. He chose prison to protect his family and save Lallybroch. He watched over his men at Ardsmuir. Even in the opening scene of this episode, we see him draw a dagger when entering HIS OWN PRINT SHOP. The man is never at ease. 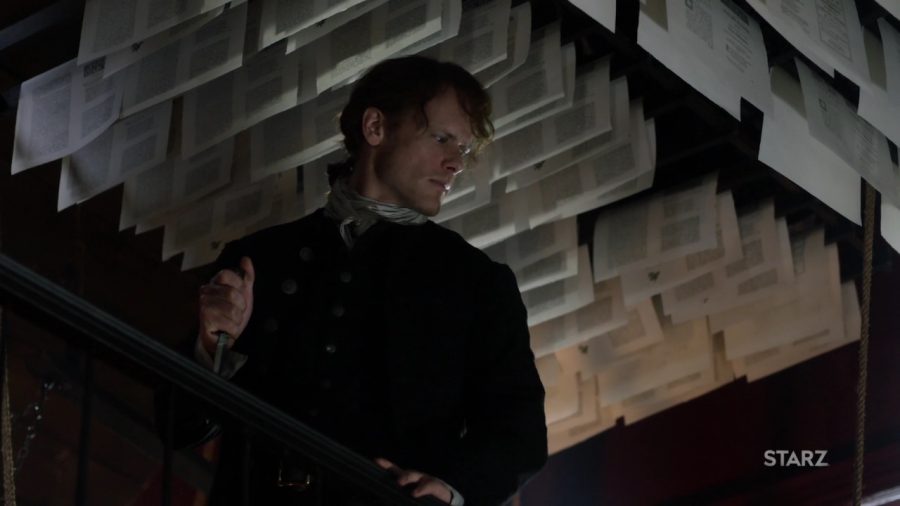 Yes, he looked happy when Claire touched him and he realized that she was real. He was emotional when they kissed for the first time. However, when he said, “it’s very fine to see you again, Claire,” I was waiting for the “but.” It was fine seeing you, Claire, but I have to be at the shop early in the morning, you should see yourself out. It was fine seeing you Claire, but this is a bad time. It was fine seeing you Claire, but I’ve moved on and you should do the same. He started to say something on more than one occasion but he kept getting interrupted, once by Claire who had the good sense to realize that behind one of those doors in the brothel bedroom a few skeletons were waiting to be released.

And this brings me to the magic of storytelling. The Outlander crew took a story that I thought I knew and made me question it. They made me look at the uncomfortable truths lying just below the surface that I could avoid when I was the one interpreting the words. They gave me an insight into Alexander Malcolm’s world and reminded me that all was not well just because his one, true love had returned.

While Jamie is clearly happy that Claire has returned, he is just as clearly anxious about what this return might mean for his future; their future. Living an “unsavory” life of printing treasonous pamphlets, smuggling spirits and sleeping in a brothel is one thing for a bachelor. It’s quite a different thing for a man married to a respectable healer. If Jamie believes that there is danger lurking in his own shop, how could he possibly allow Claire to be there? Where will they go? What will they do? How will he have to reinvent himself (again) to protect the one he holds most dear? How many times can one man begin a new life? 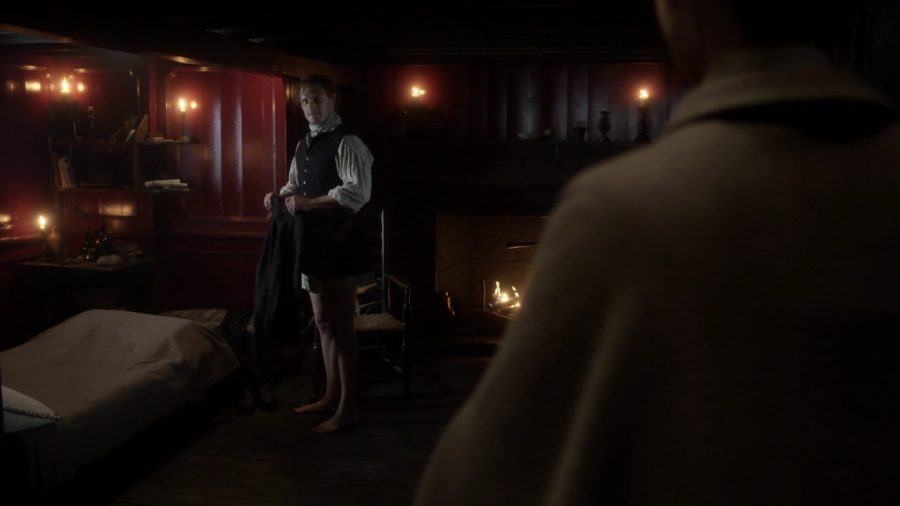 When I watched the episode again with those questions in mind, it made it easier to understand Jamie’s loss of words, his occasional hesitation, his inability to let go and immerse himself fully in the joy of Claire’s arrival. Per Newton’s Third Law, every action has an equal and opposite reaction. There is no doubt that Jamie is happy to have Claire back in his life, but he’s also concerned about the countless chain reactions that her arrival will trigger.

With that in mind, I’m going to watch episode 6 one more time, and then I’m going to sit back and wait for next Sunday. I think I’m ready for it now. Well played, Outlander writers. Well played.

I’d love to hear your thoughts. What do you think weighed on Jamie’s mind during his reunion with Claire?

While you try to decode Jamie’s mindset, enter for a chance to win this week’s global giveaway—this gorgeous “Sassenach” bracelet from DecodedDesigns! Entries must be logged by 11:59 p.m. on Wednesday, Nov. 1.
Good luck! 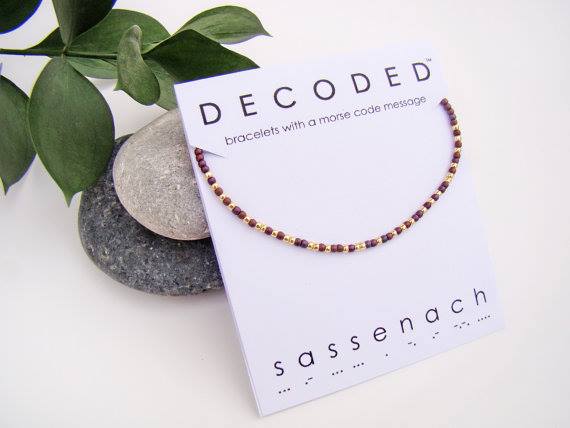