Parallel Lives: Why the Claire/Frank Story Is So Critical to Outlander Season 3

Outlander showrunner Ron D. Moore said the Claire/Frank story was critical to the Season 3 plot line. Here’s why he was right. Dammit.

When Outlander showrunner Ron D. Moore said in interviews before Outlander Season 3 kicked off that he thought the Claire/Frank story was critical to the overall story arc of Voyager, I wanted to scream. No! No! No! We actually don’t need to see much of their lives in Boston, thankyouverymuch. Did you not read the blog post I co-wrote with my colleague, Anne Gavin, giving you very explicit suggestions for Season 3? Diana Gabaldon didn’t feel the need to give us a play-by-play of Claire and Frank’s lives falling apart. Why should you? Let’s just get to the PRINT SHOP, Ron! NOW!

But, sigh, four episodes in to Outlander Season 3, I have to admit—Ron was right. Apparently he does know more about how to set up a show than a bunch of obsessive fans with very strong opinions but no actual experience creating a TV show from a fabulous book series. Huh.

While the moving back and forth between centuries—literally—all while concurrently zooming through the chockablock story line of 20 years would seem like a disaster in the making, in reality this strategy ends up bringing home with a resounding thud this very poignant, suckerpunch Outlander theme: Jamie and Claire may be separated but they are united in living, as Thoreau so aptly put it, “lives of quiet desperation.” By handling it this way, Ron and his team unite us all in their struggle, week in and week out.

In episode 1, “The Battle Joined,” for instance, Jamie and Claire are metaphorically joined in a battle for their lives. Jamie’s is more literal of course given his injuries, while Claire’s is more figurative. She is in a foreign world where her opinion doesn’t matter. She is fighting a metaphorical death of sorts as she grapples with suddenly being considered “less than,” invisible even, by the males around her at the same time that she’s trapped in a marriage where she feels little to no love.

Their connection across time is reiterated in each of their small moments with nature, Jamie with the rabbit or hare and Claire with the small bird outside her window. That they each would notice these animals is its own indicator of their continued connection. Claire may be in the middle of a bustling city, but she is still drawn to the nature and cycles that felt so natural to her when she traveled back to the 18th century. The bird, meanwhile, is free, while she looks out from her lovely apartment that is a cage nonetheless. Nature—its rhythms, its animals—is integral to Celtic beliefs of course, and so it is not surprising that Jamie would take note of the animal while lying in his injured haze. But seeing a rabbit rather than, say, a skunk or squirrel may have its own significance; under some Celtic beliefs the rabbit is a sign of resurrection. Jamie may still wish to die but perhaps this is the first subtle sign he, like Claire, won’t. 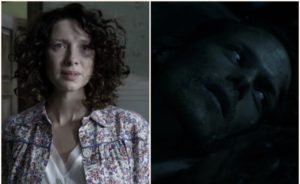 In episode 2, “Surrender,” Claire and Jamie are struggling with the idea that sometimes to get by, you have to surrender to where you are. Initially Jamie takes that so literally that he is a ghost of himself. His entire body language sends a message that he is not really present. He no longer strides but instead takes small steps, his eyes down, always down. When he talks—and those moments are rare—he says as few words as possible, his lips hardly moving at all. He, like the stag he hunts to feed Jenny and Ian and the others he feels responsible for at Lallybroch, is hunted, haunted.

Claire, meanwhile, surrenders in one of the few ways a woman had open to her at the time: she resigns her self to trying to make the marriage work—unsuccessfully. She patters around the house and even reaches out to Frank for sex, trying to reconnect on whatever level she can. 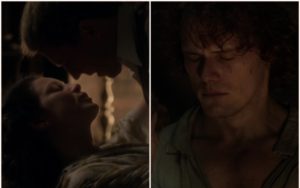 But neither one of them can surrender as a means to an end. Once Fergus loses his hand, Jamie breaks down—God, what a moment to see him reduced to a sobbing, crushed man in his sister Jenny’s arms! But like the phoenix rising from the ashes, Jamie comes out of that crushing moment with new resolve. He realizes that as much as he would like to do so, he can’t give up. Too many depend on him. And so he visits Fergus and thanks him for reminding him that he does still have a purpose on this earth. “There you are milord,” Fergus says so astutely.

The gut-wrenching physical manifestation of their parallel lives is clear in the sex scenes—Jamie with Mary McNabb the night before he turns himself in and Claire, first as she pleasures herself and then when tries to reach out to Frank. You can look at me, Mary tells Jamie when he tentatively kisses her with his eyes closed. “It’s just something I do,” he says about his eyes, as he clearly imagines Claire throughout that touching exchange. Two hundred years forward, meanwhile, Claire is having her same eyes-wide-shut moment. Yes, she has reached out to her husband to survive, but no one watching those moments misunderstood who she was talking about when she first touched Frank and says, “I miss my husband.” Later, when Frank begs her to open her eyes as they make love and she refuses, he says what everyone else sees. “When I’m with you, I’m with you,” he says, “but you’re with him.” It is a moment when Claire, like Jamie with Fergus, realizes she must rediscover herself, that marriage will not ever be enough, that surrendering won’t actually work. And so she rises to her place of power just as Jamie did; she returns to her healing roots to become a doctor—and she and Frank move to twin beds.

In episode 3, “All Debts Paid,” Jamie and Claire have—literally—done their time. Jamie and Lord John Grey are finally even, while Frank makes it clear with his announcement about moving to England that he feels he’s more than paid his dues.. Bree is 18 and old enough to decide which parent she wants to be with (was there a working mother anywhere watching this that didn’t want to scream at his comment about Claire never being there?); his side of the bargain is over and with it, Claire’s. Not so fast, sonny. It takes two to agree that a debt is settled, and Claire makes it patently clear that Frank can have the divorce, but he’s not getting HER daughter.

Both Jamie and Claire realize in this episode that with “wins” come losses. Jamie helped Murtagh survive, only to have him torn away from him as Ardsmuir is disbanded. He allows Lord John to learn more of his past, only to have Lord John make the mistake of misinterpreting that friendship. Claire, meanwhile, loses Frank, the man whose only fault, to some extent, was to be in the wrong place at the wrong time. While Claire could never allow Frank to occupy the same part of her heart once she met Jamie, she did, as she notes by his body on the gurney, love him. He was her first love. 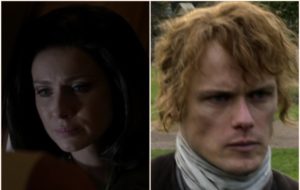 And finally, in episode 4, “Of Lost Things,” both Jamie and Claire lose at love again. Jamie loses his young son, Willie, when he realizes he must leave to protect the child from snoops wondering about his parentage. And Claire believes she has lost Jamie forever when the ships’ manifests turn out to be unhelpful. She can’t find him and leaves to return to her 20th century life, her few moments of hope completely dashed.

These parallel and yet concurrent journeys showed us Jamie and Claire struggling through many of the same trials. Thanks to this show strategy, we saw what they each went through while apart, what and how they suffered, how their connection survived—even as they were literally centuries apart. We are left yearning for that reunion almost as much as they are—and so I say well done, Ron.

What parallels do you see between Jamie’s and Claire’s respective lives while they are apart? Did this approach by Ron help or hinder how you’re feeling about Outlander Season 3 so far?