As everyone from Ron D. Moore to Maril Davis to Caitriona Balfe and Sam Heughan have said repeatedly since Outlander began: the show owes a great deal to the people who work tirelessly behind the scenes to make it all work. We decided it was time to recognize those people who may or may not get a mention on the credits as they scroll by. The first in our series showcased Arron Cuthbertson  for his outstanding job with the extras in “The Battle Joined.” Here we thank Ann McEwan and the amazing make-up team for helping to create “Cave Jamie.”

We all have those days…weeks…months(?) when we look in the mirror and think, “I could really use a MinutewithMary makeover.” But what if you are an actor that has to portray a part who, in theory, has been depleted for years, yet between takes you’re being pampered by a full-on production crew? To whom do you turn to help you feel you’re in that depression….that abyss? You turn to your makeup artist and her crew.

So many actors say that they can do a part but it‘s not until they’re in full makeup and costume do they feel they really ARE that character/person. I imagine that rings true with Sam Heughan in playing Jamie Fraser. He said this since even back in Outlander Season 1 with the scars and the red hair. I’m thinking that now it is even more true as he plays Red Jamie, aka Dun Bonnet. That hair and makeup have helped him feel the emptiness that Jamie was experiencing. After six years without the other part of his heart….after six years of recovery from an injury that should have ended his life….after six years in solitude in a cave….six long agonizing years. Who can we thank for guiding him to transform to this shell of a man?

The makeup team. In “Surrender,” Outlander’s makeup designer Annie McEwan and her team had the tall order of bringing to life the physical toll that Jamie’s isolation and loss had on him.

I would like to thank you for helping the viewers feel how Jamie was FEELING…or more specifically, not feeling. Throughout the first part of the Episode 2, we mostly see Jamie with his long unkempt, dreadlocked hair and beard. The hair and the beard help to hide his face and all we are able to see is his eyes.

As we approach the final scenes, Mary McNabb pays our lonely, sullen warrior a visit. She strips away the hair and beard, and we are left with the true gift of your team. THAT scene is when I truly was able to witness the despair, angst and hollowness of our hero who has lost everything, his heart, his soul. We see his face dark and sunken in around his eyes. There seems to be no emotion, yet I was overcome by his haunted loneliness. 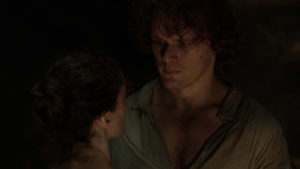 What you accomplished is even more impressive given the very brief description you were given in the script:

”If it weren’t for the CRYSTALLINE BLUE eyes, recognizable even as dulled by loneliness and too much solitude as they are, we might not know this feral creature is JAMIE FRASER. The years without Claire have stolen his spirit and left him a  shadow of his former self. He watches the cart move away, eyes vacant. He turns, pulling out a dull brown hat—the DUN BONNET—and placing it on his head as he slips back into the woods.”

But then we SEE HIM…a man, barely visible amidst the trees. his BEARD is long and wild, cheeks sunken, his skin rough from prolonged exposure to wind and sun and rain. His breeks and shirt are thin and dirty. He holds a bow loosely in one hand, and there is a quiver with several arrows on his back. 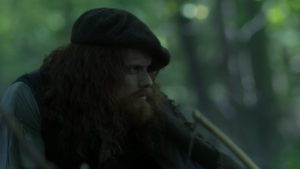 Living in isolation—physically and emotionally—for several years has the potential to turn a person feral. The literal definition of the word is “to be in a wild state, especially after escape from captivity or domestication.”  Alone in a cave for six years, muttering nary a word. By using the techniques that you used to show a hollow shell of a man, Sam was able to embody the character of Red Jamie—that being Jamie Fraser at his lowest, essentially living his life in solitude and silence.

To know this was your intent, simply put—you nailed it! 100 percent.  Thank you for allowing us to experience the desolation of Jamie Fraser, and Sam Heughan’s raw performance, first-hand.

With love and admiration from an Outlander fan,
Denise

Read our thank-you to Arron Cuthbertson for his work as extras coordinator in recreating the Battle of Culloden in “The Battle Joined.”