Packing for time travel is tricky. We saw hints of what Claire is taking for her new life in the 18th century. Here’s a look at what she might have forgotten.

Have you ever spent days packing for a trip but still find yourself missing some essentials when you arrive at your destination? If those tiny signs in hotel rooms are any indication, you aren’t the only one. My packing tends to be extreme: I either leave behind half of the things I intended to bring or I bring along far too much and then regret the schlepping required to move it all from one place to another. But what if your packing was for a different kind of trip—a trip to the past? 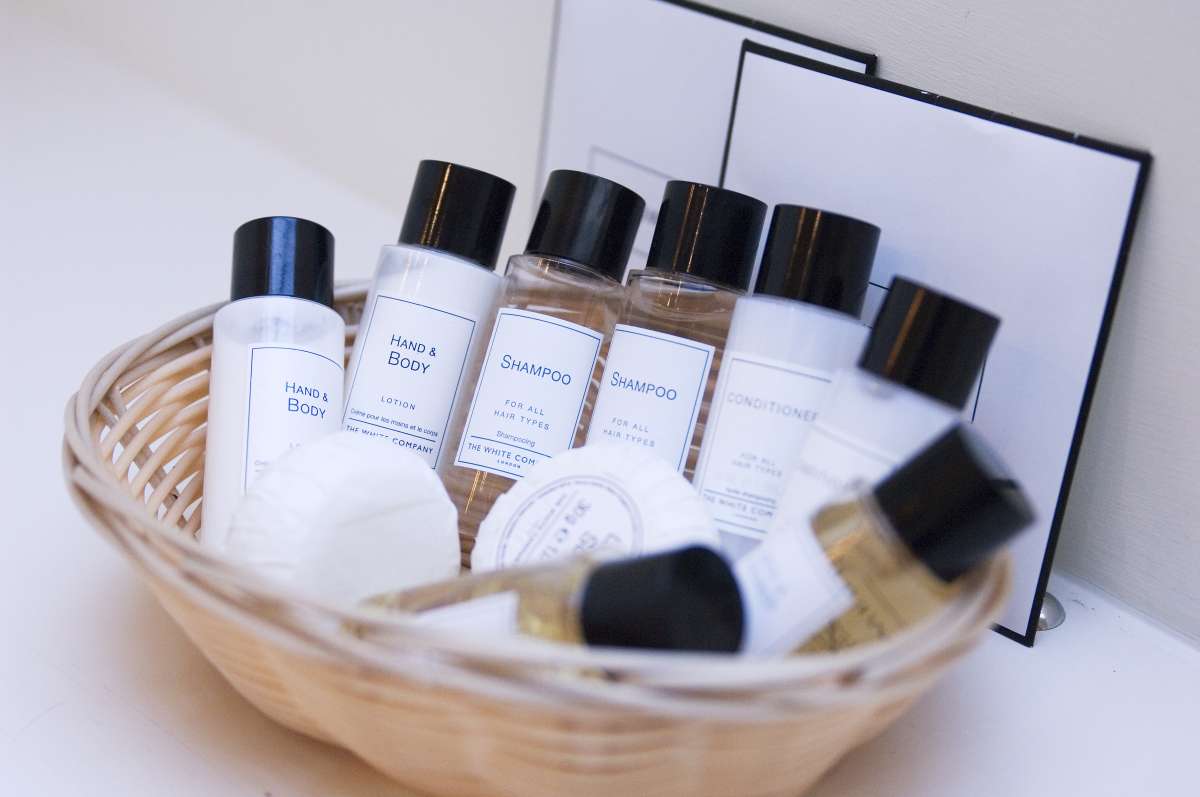 When Claire went through the stones the first time, it was an accident. She didn’t have a moment to think about what was happening. She just put her hand on the stone and woke up 200 years in the past. On her second trip, she also didn’t have time to prepare. Colum’s death (or murder/justifiable homicide…it’s all a bit murky) and the Battle of Culloden loomed near, and Jamie took Claire to the stones to save her from the suffering and death that awaited the Jacobites. Claire was too busy sobbing to think about what to take with her. Jamie gave her his father’s ring “for the bairn” and then, in the show, he did that beautiful slow dance to move Claire toward the stone.

This time around Claire had the opportunity to think about what she would take with her as she returned to the past and her future (god I love this show). Knowing that she could only take her clothes and whatever was in them she had to decide what was critical for both her short and long term survival. Her inventory consisted of money, penicillin and (in the book) peanut butter and jelly sandwiches. 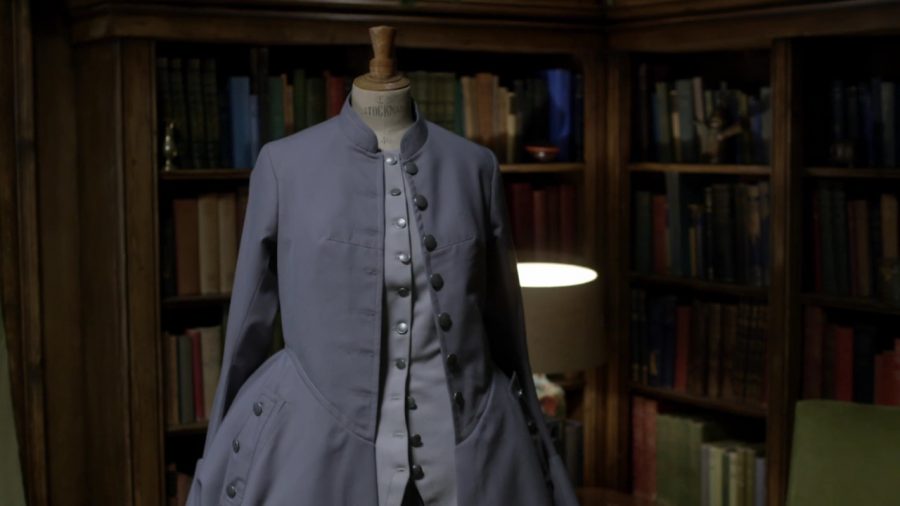 What would you take? How would you prepare? I’ve posed this question to 20 different people and have received 20 different responses. One was an eye roll from my guy. He’s not amused by my Outlander games and is probably still a bit cross over that kilt thing last year. An Outlander-obsessed girl can dream can’t she? My child who is, herself, a lover of fantasy/adventure books immediately blurted out that she would take medicine (smart girl) and a few days later asked what would happen if someone with a titanium hip went through the stones. I don’t know the answer, but I do love the way that girl thinks. Others have mentioned toilet paper, toothpaste, lotion, deodorant, razors, candy, penicillin, contraceptives, soap and tampons.

I’ve given this a great deal of thought because I’m a daydreamy sort of girl who clearly has too much time on her hands. I thought initially that Claire had it all wrong, but the more I think about it, she was right. Most of the things I would want to take with me would be of no use in 1766. A smartphone would last somewhere between a day and a few days, but what good would it do with no cell towers or WiFi? My beloved diffuser would be of no use and I would live out the remainder of my days with frizz and no curls looking like one of those troll dolls from the 1980s. (One day we really need to talk about Season 1 Claire using that brush on her curls but not today.) Toilet paper is a short-term solution to a long-term problem. If you can’t make peace with leaves, then I’m afraid that the 18th century Scottish Highlands should not be a destination on your time-traveling itinerary. And so it goes, with nearly the entire list. I’m left with penicillin, money and tampons.

I don’t need to explain the need for penicillin. Claire knew where she was going and she had seen the horrors of that time period firsthand. She knew that she wouldn’t be able to save many people with her small supply but it might be enough to save a stubborn Scot once or twice from his stramash du jour. The money is also a no-brainer as I would need to buy a horse pretty quickly to save my arthritic knees from those freaking awesome but non-orthotic 18th century shoes. For the record, I would take a pair of Jamie’s boots any day. 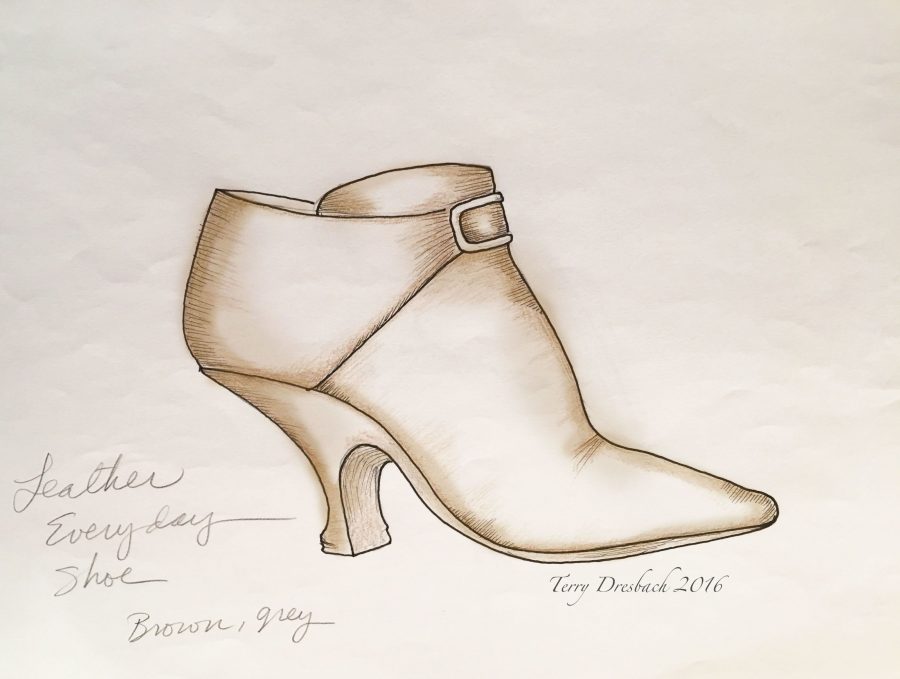 This is a sketch that appeared in Elle magazine’s June 2016 interview with Terry Dresbach.

This brings me to tampons. I thought I would never get to write that in a blog post, but here I am feeling both smug and certain that this will be the first and last Outlander Cast blog post that tackles the importance of feminine hygiene products. At any rate, tampons might also appear to be a short-term solution for a long-term problem, but I need you to hear me out. There are times when I am willing to give myself to nature and my surroundings and go with the flow (that was an unintentional, but well-placed pun). There are other times when I need a bit of civility. I analyzed the dress that Claire wore through the stones and applied a series of mathematical equations involving algebra, trigonometry and several other forms of math that I failed in college, and came to the conclusion that I could sew 140 tampons into the skirt. If I used them judiciously, say four per month, that would give me nearly three years worth of hygienic sanity. I honestly can’t think of a single trapping of modern life that has the potential to be so useful for such a long period of time (I can’t stop with the puns).

In the spirit of book Claire, I feel like I should also take a snack. Her description of the journey through the stones makes it sound grueling so I have to assume that I will be a bit peckish when I wake up on the other side. Peanut butter won’t work because it gives me terrible indigestion, though to be fair, a tummy ache would be the least of my worries if I woke up in 1766 Scotland. My snack choice is beef jerky and Skittles. Again, hear me out. Beef jerky is light and packed with protein. I could bring enough of it to keep my hunger at bay for a few days, the importance of which can not be understated. By this time, witch trials in Scotland had largely ceased. However, if a group of people encountered hangry me, they would find plenty of reasons to light me on fire. My family can confirm this. The Skittles get to make the journey because they are the best fruity candy in existence. I will not entertain dissenting opinions on this matter. Also, who can be cross when eating a rainbow of fruit flavor? 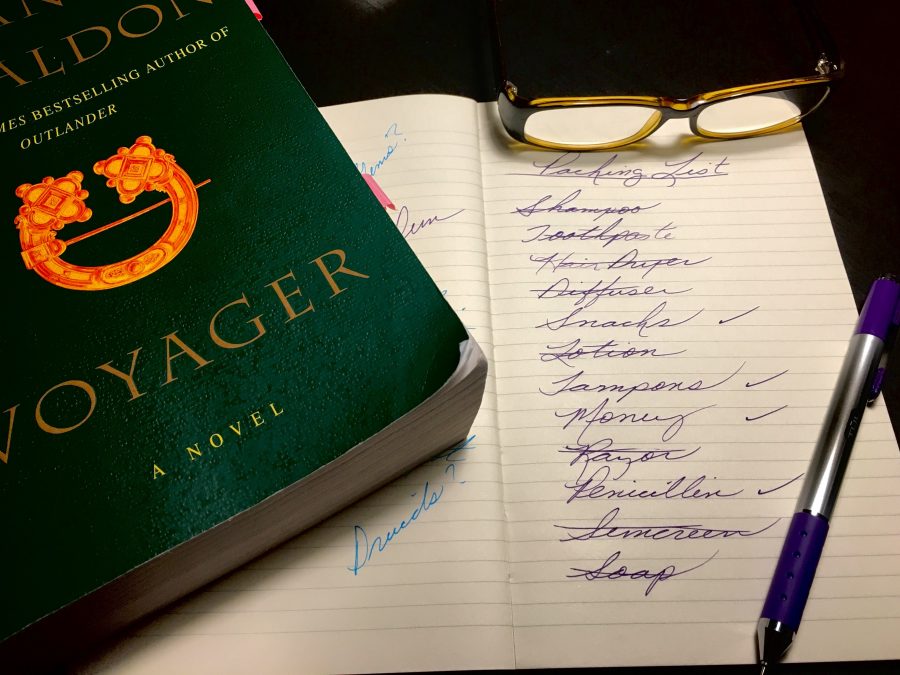 With all the limitations on what Claire couldn’t take on her journey, I want to spend a little bit of time on everything that she could take. While Claire had peanut butter and penicillin, she also had a spirit of adventure, faith in what she believed to be true, hope that her faith would guide her to her intended destination and a love that burned deep inside her. That mindset isn’t just handy for time travel, my friends. I don’t think that any of us will ever stand in front of a portal capable of transporting us to the past.* What we will have is a lifetime of moments where we have to decide whether or not to jump off the cliff and into the unknown. Facing that abyss is always scary but knowing that there is love on the other side might just be enough to let go, to fall, to know that someone or something will catch you before you hit the bottom. Claire knew that she couldn’t live the rest of her life without knowing, without trying to get back to the love that she hoped was waiting for her. What about you? Would you jump or would you stand on the edge of the cliff and always wonder “what if?”

*If you do find a portal to the past and make the journey, please try to send word back to us and let us know how it went. Also, let us know if we can join you.

It’s your turn now. If you could travel to the past, where would you go? What would you pack for your journey?

Outlander Cast Giveaway
But wait… let us give you a head start on your packing and help you channel your inner Claire with the chance
to win this gorgeous knitted shawl from Daniela Stange!
Enter to win this week’s giveaway below between now and 11:59 p.m. on October 25th. 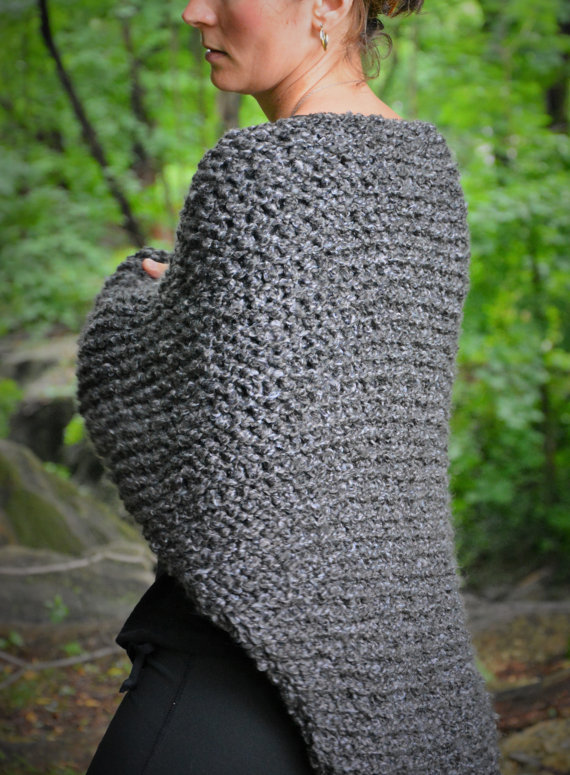