Claire and Frank The Battle Joined

I Stand with Claire: Why Outlander Fans Need to Cut Claire a Break

Some Outlander Season 3 fans are giving Claire a ton of grief over her treatment of Frank. Here’s why it’s time to cut Claire a break.

Claire’s getting shade for her treatment of Frank in Outlander Season 3, and I’m not having it. There’s been a spate of social media pushback accusing Claire Fraser (okay, Randall, too) of heartlessness, selfishness, and general whoredom, among other unsavory things. My position is that Claire does not bear blame for the metamorphosis from a loving marriage to a nearly broken one. Here’s why I stand with Claire.

It’s a painful thing to watch Claire’s valiant efforts to resuscitate a marriage that has been torn apart, first by war and then by unearthly circumstance. When she reappears in the 20th century, Claire wasn’t terribly moved when Frank showed up in her hospital room; and surely didn’t expect him to remain with a missing wife who turns up pregnant with another man’s child. Ever mindful of the devastating situation posed to Frank, Claire makes no demands on him to remain. Despite the numbing pain of fresh losses, Claire follows Jamie’s wishes, and agrees to Frank’s terms to raise the child together as their own; to forget the past and move forward. That is pure courage, my friends, and she does it for Frank, and for Jamie and his unborn child. The love of her life is gone forever, and the living breathing man wants her desperately, and the baby too.  To deprive them of each other would be the height of selfishness. I stand with Claire.

Claire works hard to keep her promise, supporting Frank with her bright smiles and sunny disposition, despite her deep grief. Lest we forget, Claire also worked hard 200 years before, attempting multiple times to return to Frank and her own time. Outlander fans of any gender who may harbor the thought that Claire was unfaithful to the yet-to-be-born Frank by marrying Jamie take note: Claire’s early goal to get back to Frank occupied her every thought, and because of it, she narrowly missed being imprisoned and killed under the cruel actions of Black Jack Randall. She fought the necessary marriage to Jamie up to the last minute, and tried to get back to Frank even after it took place. 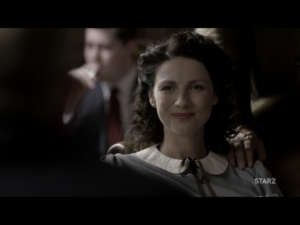 Then, it happened. Through mutual respect, trust, unimaginable acts of courage and a powerful physical compatibility, Claire finds herself in love with Jamie. When he learns all after Cranesmuir, and selflessly plans to return Claire to Frank and to her own time, Claire realizes that she simply cannot live without Jamie. And she stays; and because love is a cosmic thing, Claire could no more control her love than she could control trying to return to Frank in the early weeks and months after falling through the stones at Craigh Na Dun.

Fast forward to heartbreak, when on the eve of Culloden, Jamie selflessly plans to send Claire back again, but this time, she goes. Jamie expects that Claire will return to her marriage to Frank, taking bitter comfort in knowing she and his child will be cared for. Sadly, and reluctantly, I stand with Claire. 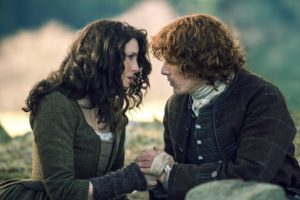 Claire’s losses are deep. In a time span of a few hours, she is told by her menstrual-astute husband that she is pregnant, and after a wrenching goodbye, Jamie walks her backwards to the stones—back to Frank. Claire has lost her soulmate and husband, the opportunity to raise his child alongside him, people she cares for and a way of life she has come to embrace despite its hardships.

Frank, we speculate, may have being doing his level best to move on during Claire’s absence, but the shocking surprise of her return, combined with her incredulous story sets Frank on a slash-and-burn mission of denial.  He destroys her 18th century clothing, and is convinced that his plan to raise Claire’s child as their own in the setting of a loving marriage is a viable idea. He’s lost and then found his wife, but she is no longer his. Meanwhile, Claire is still in the early stages of grief, and in good faith, accepts his wishes. Loss is hard; forgetting is harder. 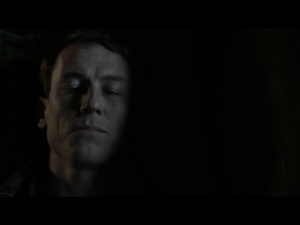 It Ain’t Easy Being Frank

We only know of Book Frank through Claire’s perspective, but showrunner Ron D. Moore brilliantly serves the watcher those aspects of Frank that readers see only in spare amounts. Watchers are given the task to understand Frank’s position, to the chagrin of some fans, but welcomed greatly by others.  A friend of mine points out that any other actor might not have elicited the level of sympathy that Tobias Menzies’ performance brings to the role of Frank; that and excellent direction, storytelling and expansion of the character. Meanwhile, his angry resentment is simmering just below the surface. Frank’s master plan is collapsing; Claire gives her all until she’s pushed to react. Claire, I’m standing with you.

Early in Outlander—in fact, in Episode 1 of Season 1—we learn that Claire is indeed a sexual being. She is not shy initiating sex at the start of their second honeymoon, nor is she shy about foregoing her undies, as Frank discovers at the ruins of Castle Leoch. Later that same day, Mrs. Graham finds Claire’s sexuality laid out neatly in Claire’s palm. So why the clamor when Claire seeks sexual expression with Frank? Claire says she’s missing her husband. One of them, anyway. Claire’s imagery of Jamie during the act is unavoidable. Frank senses this and confronts her, and here he needs more patience, and less insecurity. His expectation of Claire to abandon completely all she’s lost is not cool, and not kind.  She can’t give what she doesn’t have, and pays the consequences with her guilt over it.  Still, she tries for a mutually beneficial physical connection, and I find that healthy. Would we question a husband seeking consensual marital relations with his wife? No. So, I’m going to move away from insidious double standards in the sex department and stand firmly with Claire.

A pregnant woman may be, at baseline, irritable on a good day, and through-the-roof hostile on a really bad day. It’s morning, and Claire spies the bird outside the kitchen window, which continues to behave like a bird, free to function in the cycle of nature. Bear McCreary’s Scottish theme plays. Frank is reminiscing of things British, while Claire expresses a desire to embrace American culture. Frank’s idyllic breakfast-at-home diorama is deconstructed quickly and completely as his tightly wound emotions bubble to the surface. In a stunning performance of facial expressions and taut body language, their differences are palpable in their painfulness. 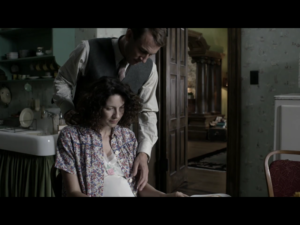 Claire’s intolerance of Frank’s touch speaks volumes more than a fratchetty expectant mother on a bad day. Frank exclaims that she’s purposefully using the pregnancy to keep him at a distance. It’s easy to see why Frank feels this way, but my first thought in this scene is that Claire has always been a very bad liar. Claire and Frank can’t help but emotionally act out their respective losses. He’s not forcing her to stay, but it’s a no-fault scenario. Where can she go without hurting Frank by leaving with the baby, by depriving her baby of a father, by dishonoring her promise to Jamie to return to Frank’s care? Claire’s carefully controlled facade gives way, pouring out her grief-fueled anger.  And a flying ashtray for good measure. Good girl, Claire. Let it out. 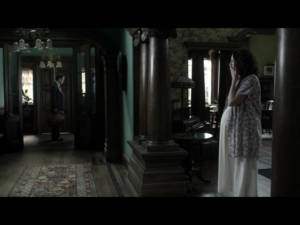 Bree is born, gloriously and dangerously red-headed, and Claire and Frank’s relationship has pivoted to a baby-centric one, where separate beds mark an uneasy but manageable acceptance of their marriage. They both love Brianna. Tender moments revolve around this child that Frank adores, and while there is that, it’s far from enough. In a brief return to voiceovers, Claire admits that, while she “threw myself into my new role as best I could,” since losing Jamie, something was still missing—“something greater than myself.” And she wanted that again.

Claire’s work as a combat nurse in World War II, and then as a healer in the Jamie’s time secured her role in something greater. The idle glamor of the salons of 18th century Paris merely increased Claire’s thirst for purpose and the need to return to healing. While modern day sexism seemed as archaic as that of the 1700s, Claire is not deterred from entering medical school. Gravitating towards the sole African American male student, an important friendship is forged.  As she passes a lone bagpiper on her way to class, she tucks Jamie away in her heart as she begins her new pursuit of something greater than herself.

Claire, you rock. Welcome back.

What do you think of Claire so far in Season 3—do you stand firmly with her?