How Outlander Made Me Rethink Ancestry & Slavery

Outlander’s “Do No Harm” offered a glimpse into the horrors of slavery. Nikki Gastineau ponders how Outlander made her rethink ancestry and slavery.

Season 4 of Outlander feels intensely personal. Maybe it’s just my current mood or maybe it’s because Jamie and Claire are walking in the steps of my ancestors. Their current path is not all that different minus the dastardly pirate and the rich aunt. With the recognition of those similarities also comes a reckoning with a list of uncomfortable truths.

A few years ago, I was looking through census records when I came across a “slave schedule” for one of my ancestors. The horror of finding the schedule was quickly replaced by the horror that the slaves weren’t even named. They were just listed by gender and age, not unlike livestock. As my research progressed, I found that most of my ancestors were slaveholders. I uncovered wills where slaves were bequeathed to family members or given their freedom upon the death of their master. I wondered how the stories of these people had not traveled through time along with other family tales. I grieved for the nameless souls on yellowed sheets of paper and I grieved for the families who would never trace their roots further than this. 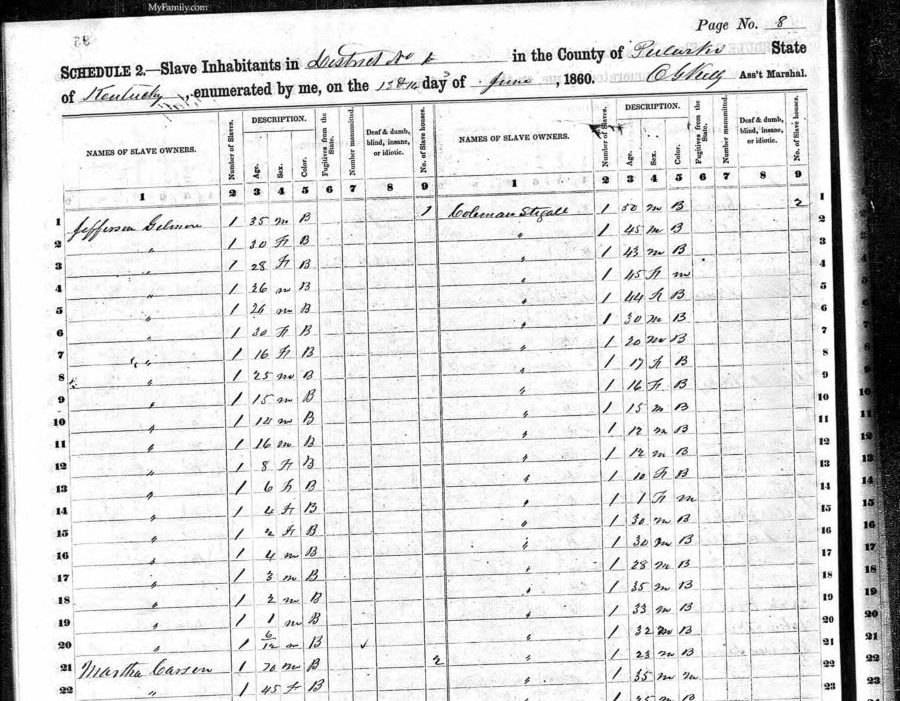 This is a page from the slave schedule in the Kentucky county where my ancestors lived.

Enter Ancestry DNA. This past summer, I turned my grandparents and parents into human guinea pigs and asked them nicely if they would spit into plastic tubes so that we could learn more about our ancestral DNA. I could not have been more shocked when my grandmother and mother both showed markers from West Africa — Togo, Benin, Cameroon, and Congo. These areas were all prominent in the colonial slave trade. I have found no recorded evidence of interracial marriages or relationships in my family tree, which leaves me with one more painful truth: the story of the American South is filled with chapters of white slaveholders fathering children with their slaves. It doesn’t take a giant leap of faith to assume that one of my ancestors was not only held as a slave, but also used for the gratification of her white master. I am all too familiar with what it takes to recover from abuse while living free. I cannot fathom what it took for countless slaves to recover and endure violence when they had nowhere to turn for comfort or support and no way out.

Watching “Do No Harm” brought these ancestors to the forefront of my mind. Who were these people who arrived as indentured servants and then bought and sold other humans once they were free from their own bonds? Were they caught in the middle like Jocasta appears to be or were they active participants in a human marketplace? How could they enjoy one moment of freedom in this new land when they withheld freedom from others?

I pondered these questions and more as I watched Claire perform surgery on Rufus, certain that he would not enjoy the long-term benefits of her medical knowledge. Ulysses shifted my attention when he said to Claire, “It would have been better for us all if he had died on this hook.” In providing Rufus with medical attention, Claire didn’t just take on the medical case of one slave, she took on an institution where even the oppressed knew that the loss of one of their own was better than risking the safety of the entire group. 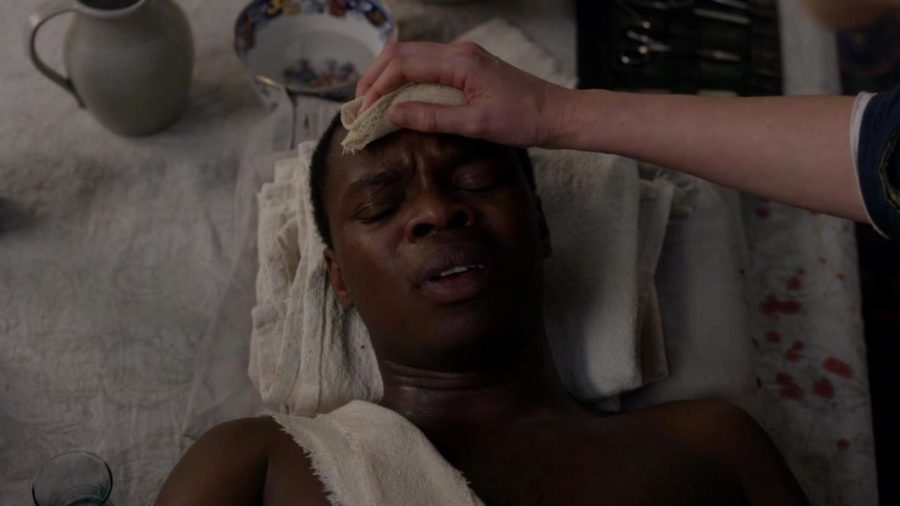 Earlier in the episode, we learn that the overseer’s punishment for taking the law into his own hands (hanging Rufus from a tree by a large hook in his abdomen) was jail time. Rufus’ punishment for attacking the overseer for lashing him (an action which Rufus was meant to be endure without audible or physical reaction) was to be hanged. All of the assembled, with the exception of Jamie and Claire, accepted this dual system of justice without question.

I won’t even attempt to tackle the issues that arise when white people tell the stories of people of color. Those stories should be told by the people who’ve experienced a life made different by the mere fact that they were born with brown skin. If you would like to read a powerful review of this episode written by a woman of color who watched the proceedings through a lens completely different than my own, please check out this article by Megan Vick.

I have always wished that I could travel back in time. My mother is fond of saying that I was born in the wrong time and I tend to believe her. However, when pondering my own time-travel adventures I rarely stop to think about the injustices that I would witness and my reactions to them. Would I, with my stubborn mind and sharp tongue, attempt to save an individual while putting an entire community at risk or would I assume the attitudes of those around me and accept the awfulness as the way of things?

I don’t have the answers, but I can tell you that this episode left me worrying less about Jamie and Claire’s future and more about yours and mine. Minutes after turning off the TV I learned about a security guard in Chicago who had subdued a shooting suspect while he waited for the arrival of police only to be gunned down by the police. I couldn’t help but wonder if that security guard would still be alive today if his skin had been white like mine and not brown. This tragedy reminded me that we haven’t come nearly as far as we like to think and that there is still much work to be done to heal the scars of the past.

I hope you felt uncomfortable watching “Do No Harm” and I hope that the treatment of slaves you saw portrayed on screen caused you to do a mental check of your attitudes and treatment of people who look and sound different than you. I certainly did. I want to applaud the writers for their unflinching take on this terrible chapter in American history and for reminding us that we are never more than a few steps away from our darkest moments.

What was your reaction to the depiction of slavery and dual forms of justice in “Do No Harm?”

Nikki joined Outlander Cast as a writer in 2016 when she realized that her friends would no longer tolerate her constant talk of Outlander. Each time you read one of her blog posts, you are working to save those friendships. Both Nikki and her friends thank you. If you would like to read more of Nikki’s mostly nonsensical and occasionally heartwarming writings, you can visit her personal blog at sassynik.com. You can find her on Twitter at @nikkigastineau and on Instagram at @nikkigastineau