Just waiting to go on the Thanksgiving table

How They Made It: Praline Pumpkin Pie for Thanksgiving in Boston

Welcome to “How They Made It,” our series exploring the food and drink of Outlander. With Thanksgiving right around the corner in the U.S., we take a look at one possible dessert for your table…Praline Pumpkin Pie. Slainté!

Do you remember the scene between Frank and Claire in the kitchen of their Boston home, when Frank complained that Briana is becoming too American? He tried to counter that impulse by making her a “proper English” breakfast.

I like to think that Frank’s efforts were in vain. That Briana turned out thoroughly American, right down to coercing her parents to hold (or at least attend) a traditional Thanksgiving dinner with all the trimmings. You know…roast turkey and stuffing, mashed potatoes with gravy, cranberry sauce (especially since cranberries were cultivated in New England), and of course, pumpkin pie for dessert.

With a nod to the South (where Claire ends up with Jamie), let’s up the ante and make that dessert be Praline Pumpkin Pie instead.

We know that a form of pumpkin pie was around in Colonial Boston. After all, pumpkin was introduced to the British settlers of Plimoth Plantation by Native Americans back in 1621. The original Thanksgiving, as it were.

Originally a dish of pumpkins stewed with honey, milk, and a bit of sugar, recipes for a pumpkin custard baked in a pastry crust didn’t emerge until the late 18th century. Now pumpkin pie is as ubiquitous at Thanksgiving as is turkey (historical accuracy notwithstanding).

The Internet bursts with everyone’s own traditional pumpkin pie recipe. In order to be a bit different (and to pay homage to North Carolina and its tradition of pecans), I decided that Praline Pumpkin Pie was in order. It’s a marriage of pumpkin custard and a praline pecan topping in a flaky pie crust.

And it has nothing to do with the fact that I love both pumpkin pie and pecan pie and have a hard time choosing between the two.

To the kitchens, then!

Tips and tricks for pie with pumpkin

Wait, hold on a minute…let’s talk about some of the do’s and don’ts I encountered while making this recipe. Specifically, adapting a pumpkin pie recipe for this purpose.

I actually made the recipe for Praline Pumpkin Pie twice, first full-sized in a typical flaky pie crust, and second as a mini pie in a graham cracker crust.

The recipe I used from Spend with Pennies pointed out that the pumpkin custard needs to be strong enough to support the praline topping. Cooking out some of the liquid helps to thicken it up. This idea works well.

Also, in an article from Epicurious.com, there was a brief mention of straining the pumpkin purée before using it, presumably to make it smoother. That sounded reasonable, so I tried it.

Frankly, I’m not sure it was really necessary given that I ended up cooking the pumpkin mixture first. The second time I didn’t bother straining the pumpkin, and it was fine.

See, isn’t it good I test these things out so you don’t have to?

Now to the kitchens! 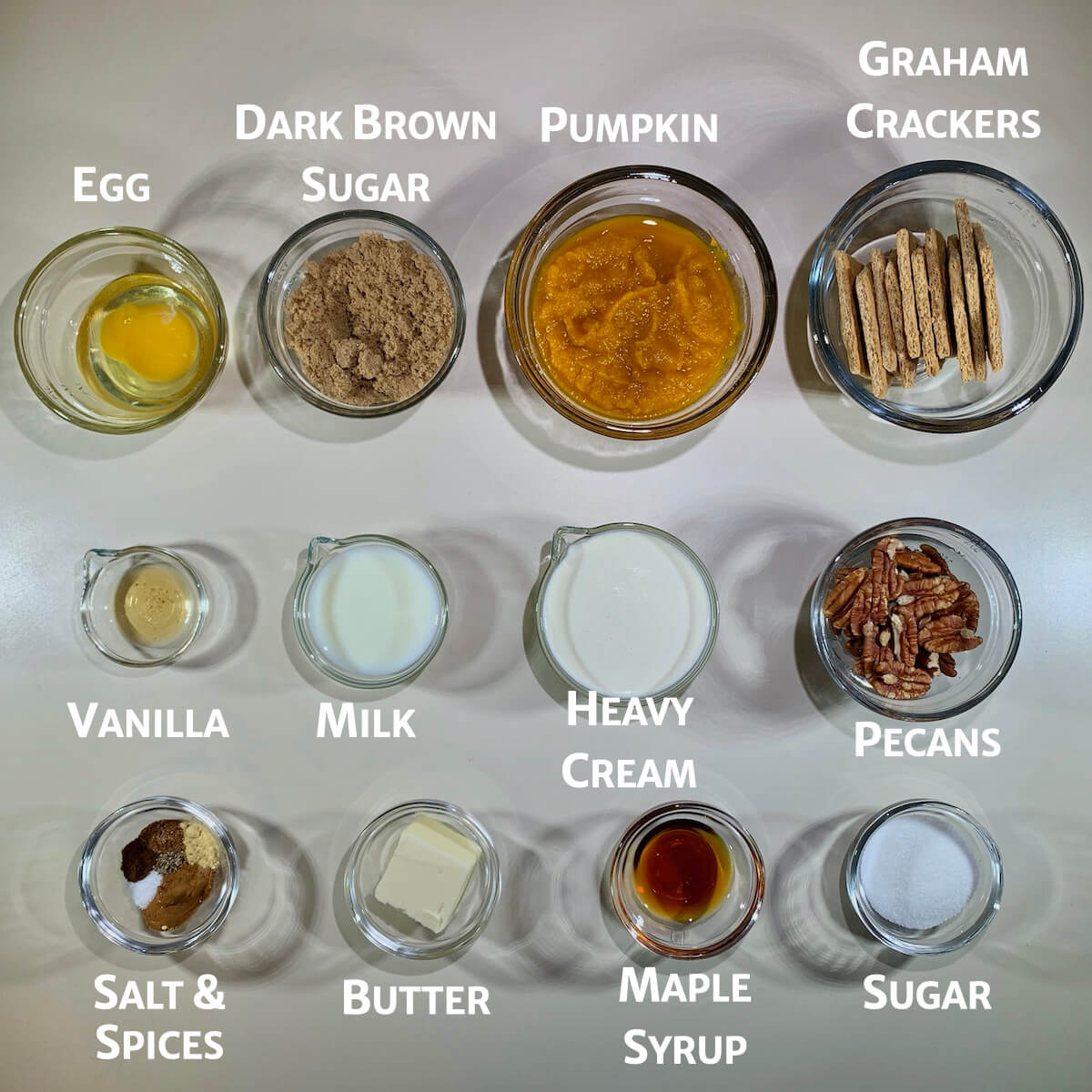 The ingredients for a Mini Praline Pumpkin Pie with a graham cracker crust.

This Praline Pumpkin Pie recipe is made in three basic steps, making the crust, filling, and topping.

I prefer a homemade pie crust or a graham cracker crust, but a store-bought crust works well also.

My all butter No Recipe Pie Crust is based on a 3-2-1  recipe ratio of flour/fat/water (by weight), so for a single pie crust that would be 9 oz of flour, 6 oz of butter, and 3 oz of ice water. I also throw in 1 tablespoon of apple cider vinegar to help tenderize the crust. Chill the crust while you make the filling.

Cooking the pumpkin filling ensures that it’s sturdy enough to support the topping, and also so it’s not as wet going into into the chilled pie crust (or graham cracker crust).

It’s important to allow the custard to cool for 5 to 10 minutes before you add in the cream and eggs. You don’t want little bits of cooked egg in your custard. 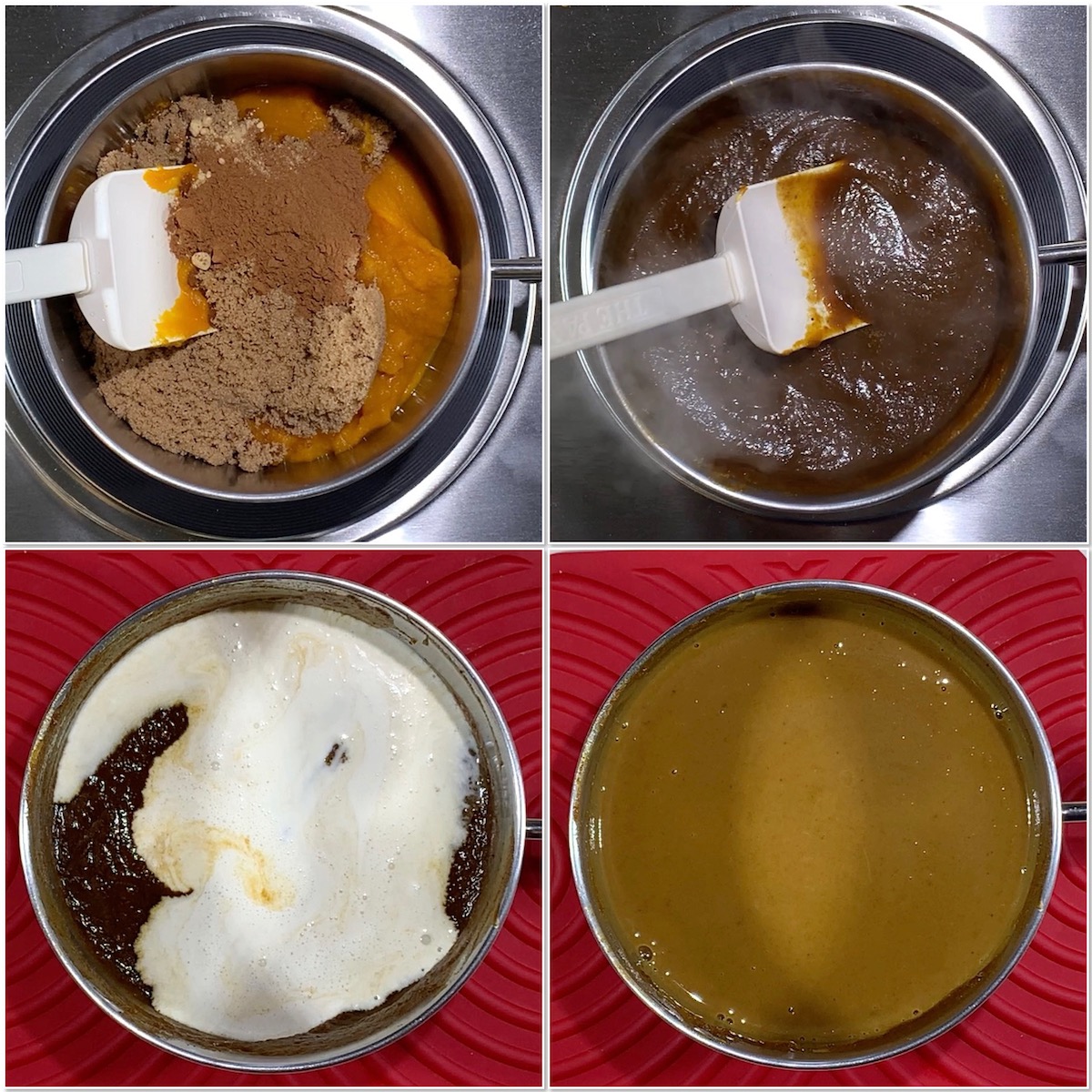 Cook the pumpkin custard, then let it cool before adding the cream and eggs.

I made a mistake the first time by not whisking the beaten eggs in to the cooked pumpkin mixture well enough. This caused  bits of cooked egg to be noticeable in the pie before the topping went on. Don’t be like me…mix in those eggs! 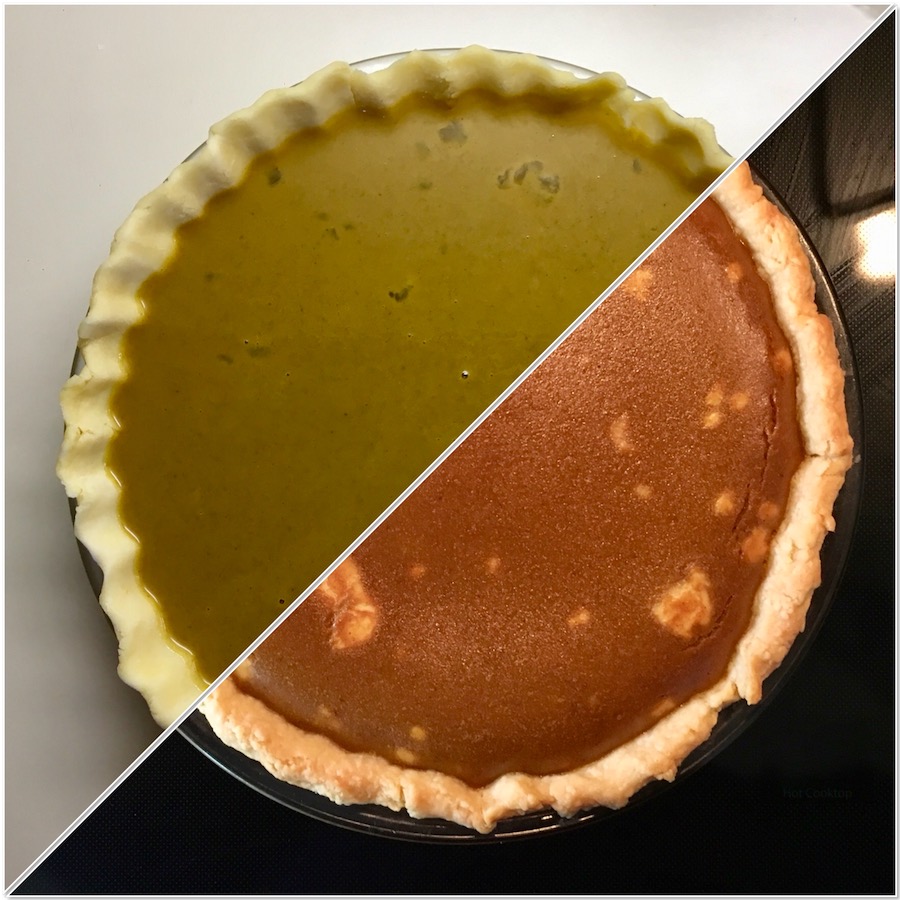 See those areas of egg in the top picture? They cooked up noticeably in the bottom.

Toss the pecan praline topping together while the pie is baking. You can use corn syrup, maple syrup, or golden syrup to moisten the topping. Each will bring subtle flavor to the overall pie. 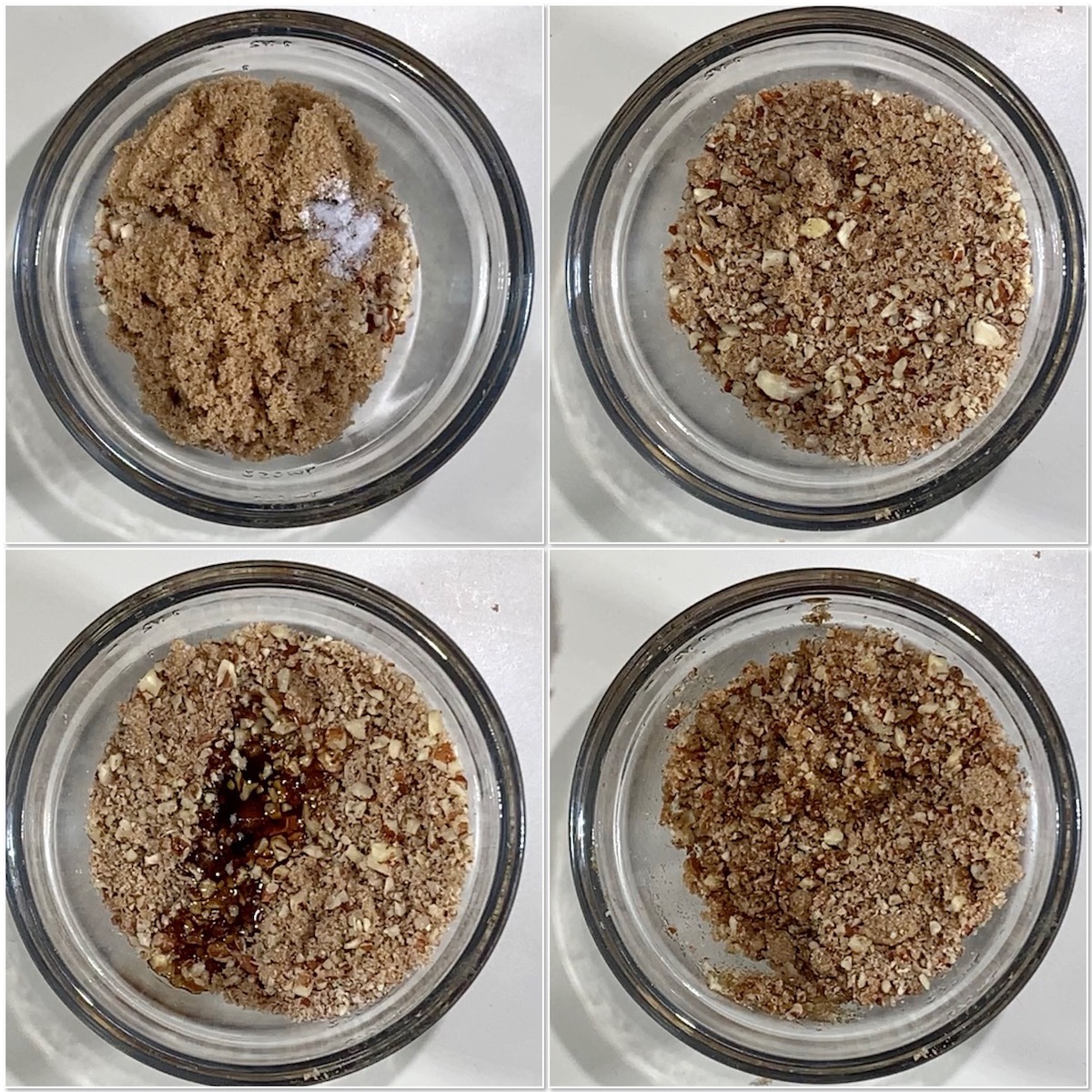 Let the pumpkin custard bake until the center barely jiggles when you gently shake it. Once it’s ready, add the praline topping and finish baking the pie.

The first time, I added a sprinkle of granulated sugar to the topping before baking, and omitted it the second time. I decided it didn’t really add anything to the overall flavor, and I wanted to showcase the topping besides. 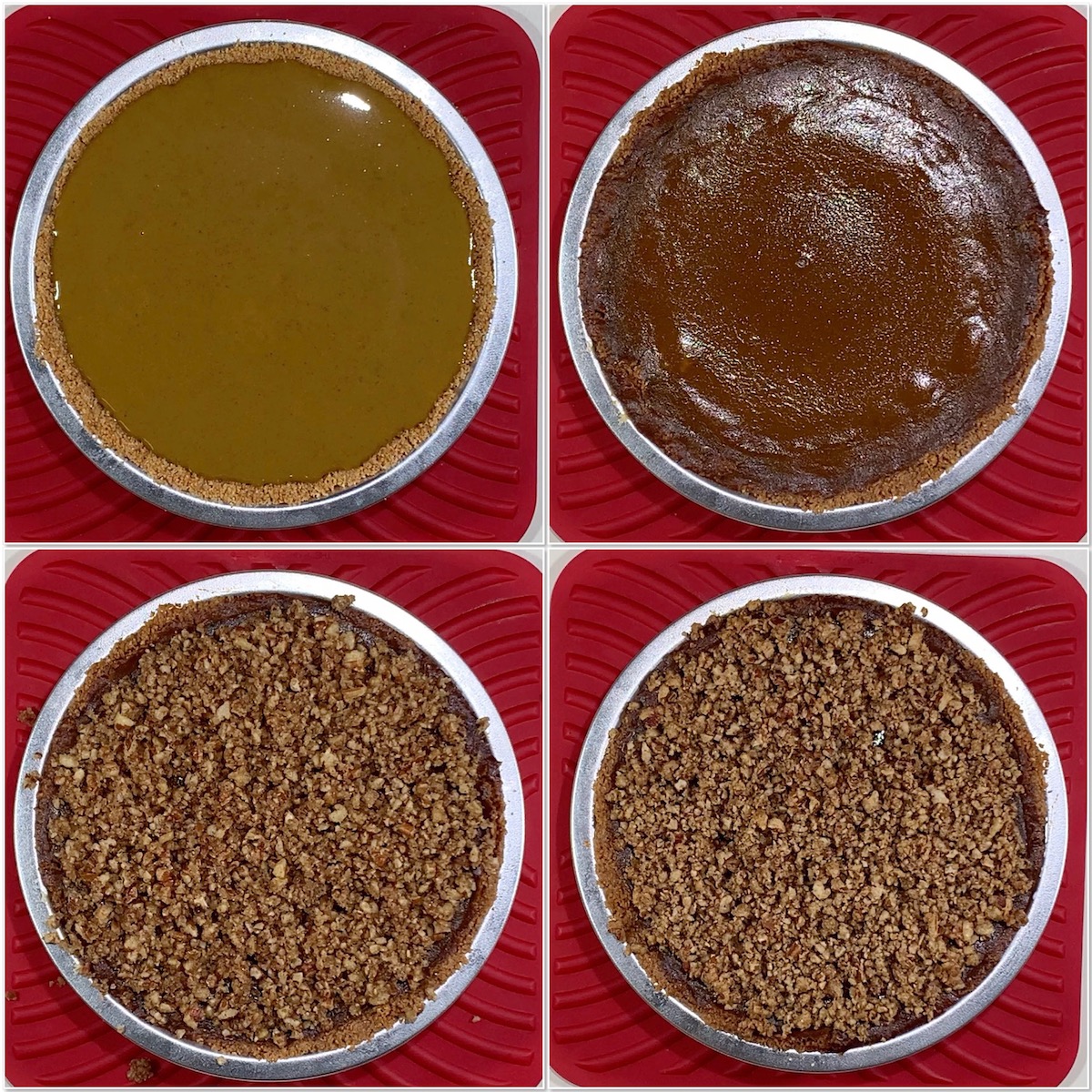 Before and after two trips to the oven

Praline Pumpkin Pie is a hybrid pie that works!

(Pausing to wipe drool off the keyboard)

The flaky pie crust gave a good base to the pie, while the graham cracker crust added its own molasses undertone. You’ll have to decide which way to go! 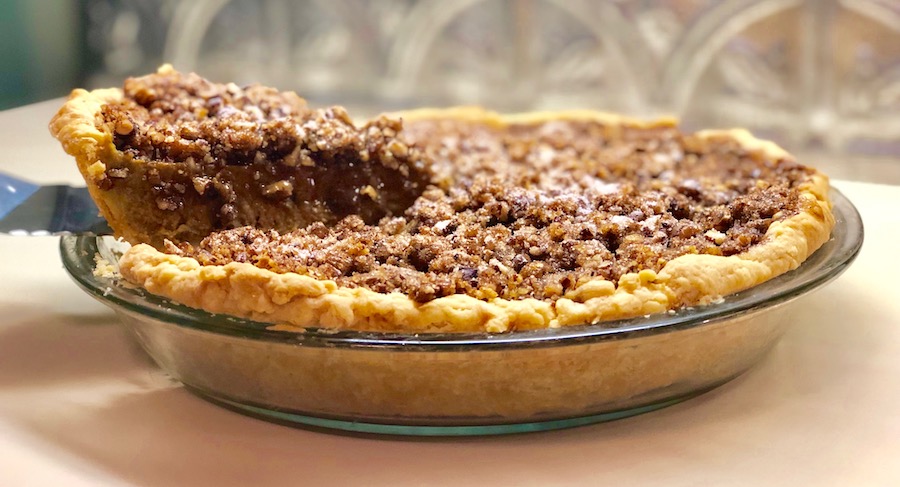 For those of us who can’t choose between Pumpkin Pie and Pecan Pie…here’s your solution!

My father-in-law won’t let me in the door at Thanksgiving unless I promise to bring him my Chocolate Chip Pumpkin Bread, and that’s upwards of 30 years now!

A Sourdough Spice Cake would also be appropriate. Or dress up your favorite fruit pie with a lattice crust. 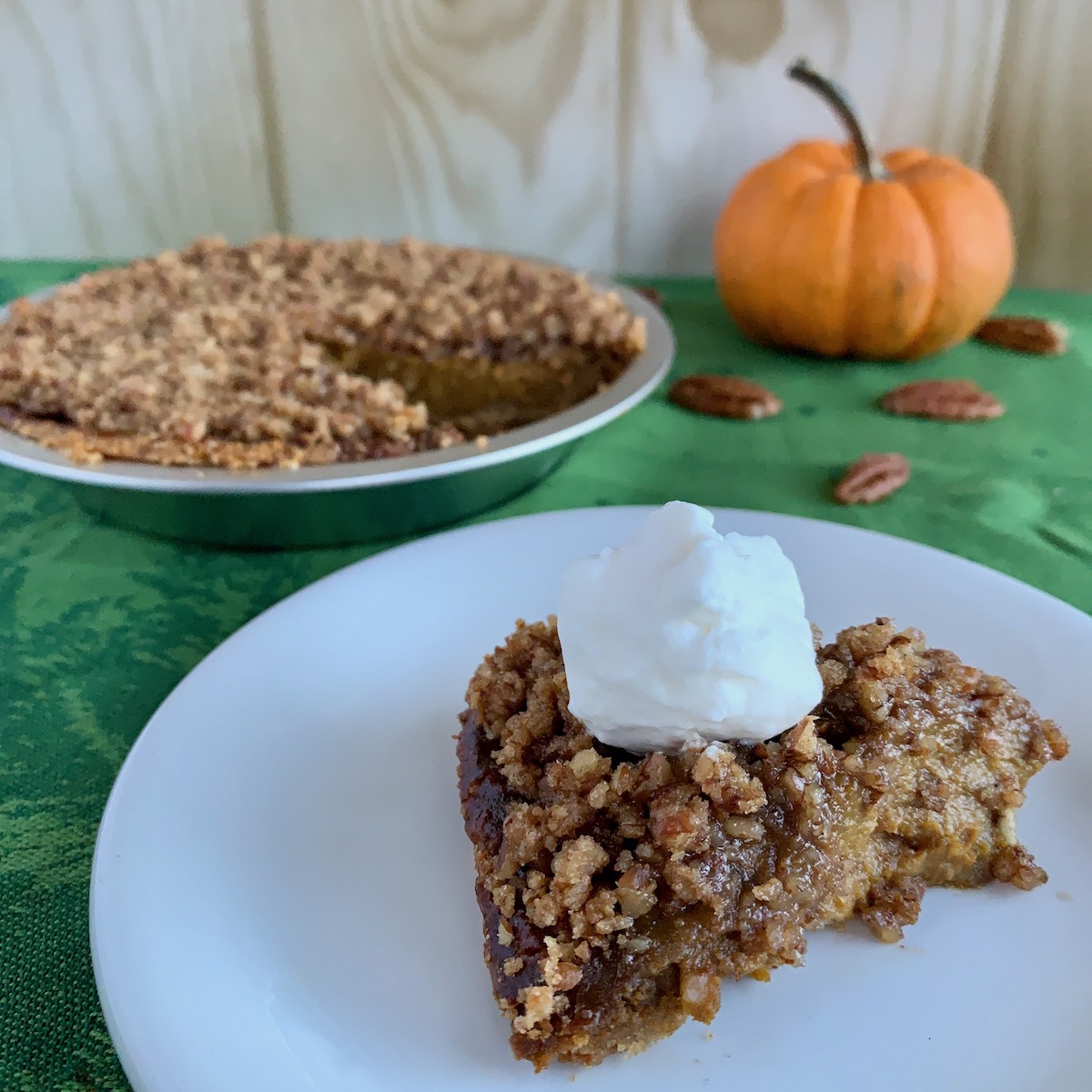 A mini Praline Pumpkin Pie is just as delicious as its full-sized cousin!

Whatever your traditions, I wish a Happy Thanksgiving to all my Outlander friends!

Do you have a traditional “must have” dish at your Thanksgiving feast (or another celebratory dinner)? 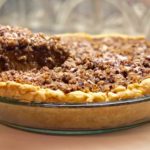 For the Pumpkin Filling

For the Praline Topping

I prefer a homemade pie crust or a graham cracker crust, but a store-bought crust works well also. My all butter No Recipe Pie Crust is based on a 3-2-1  recipe ratio of flour/fat/water (by weight), so for a single pie crust that would be 9 oz of flour, 6 oz of butter, and 3 oz of ice water. I also throw in 1 tablespoon of apple cider vinegar to help tenderize the crust. If you'd prefer a graham cracker crust, pre-bake it for 8 minutes before adding the pumpkin filling. If the pumpkin mixture is too warm after stirring in the cream, temper eggs by adding a small amount of pumpkin to the eggs to warm them before adding the eggs back in to the pumpkin. This will ensure there are no bits of scrambled eggs in the pumpkin custard. If you're not serving the pie right away, cover the cooled pie and store it at room temperature for 1 day or in the refrigerator for up to 2 days. Cover and store any leftover pie in the refrigerator for up to 5 days. Did you make this recipe? Please share your pictures with the world on your social media…tag @outlandercast (on Instagram and Twitter) and use the hashtag #howtheymadeitoutlander. I can’t wait to see your creations! 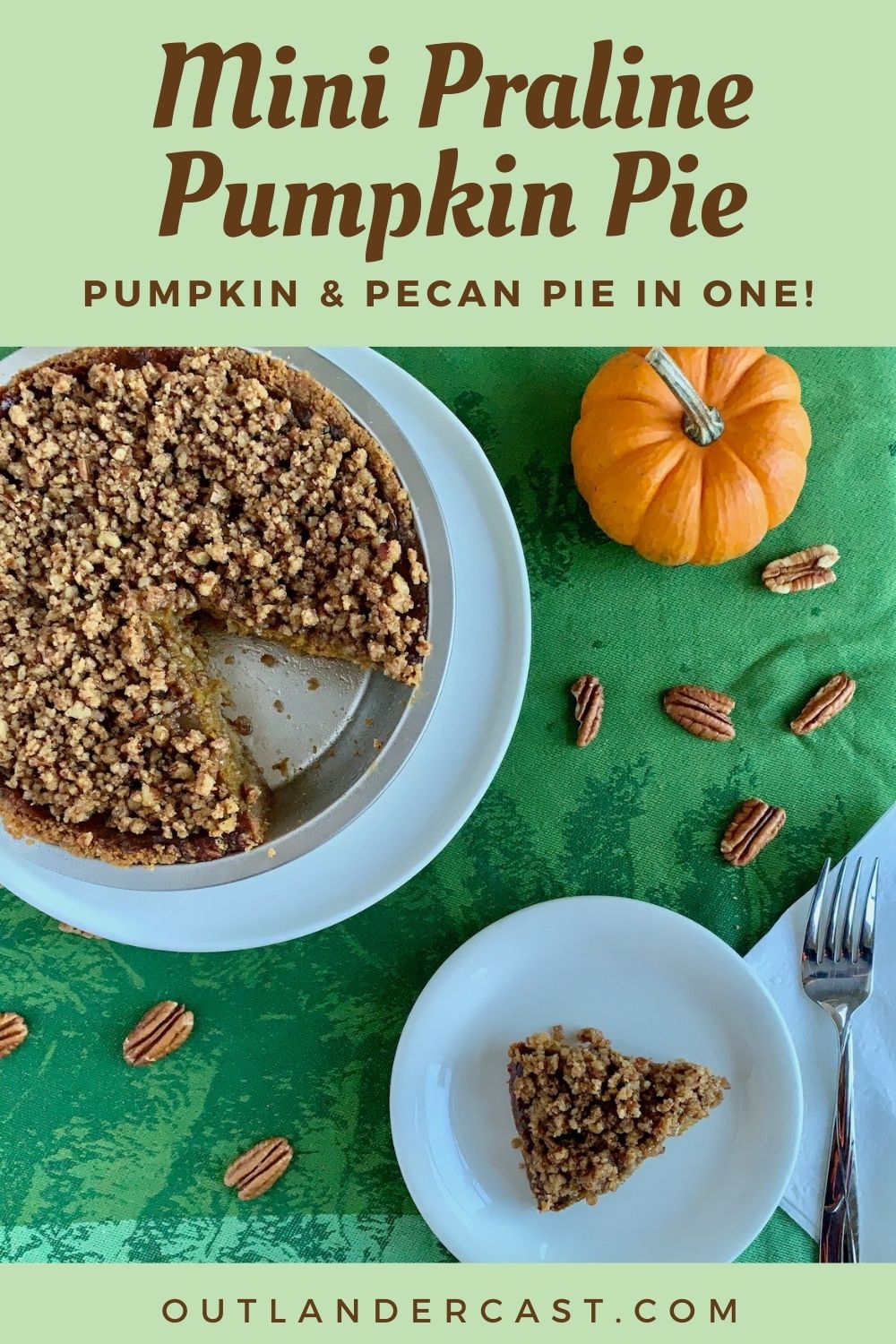