Karen Rutledge gives us her Outlander Season 4 finale “heart score,”  her measure of the episode’s emotional punch. Unlike Episode 10, this time she kept score on purpose.

The scores were so close it took me 10 full finale viewings, and even more of it in bits and pieces, to tally. The scores fell out along some typical lines, though — gender, duos and production. Also typical? My arbitrary scoring.

Backing up a minute, my heart score for Outlander Episode 410, “The Deep Heart’s Core,” happened subconsciously. Not so with my scoring of the remaining Outlander Season 4 episodes. In fact, I intentionally did not keep score on Episodes 411 and 412 in anticipation of a smashing final episode. I think letting my subconscious have free rein worked better — it is much more efficient!

Sorting Out the Finale

So, the Outlander Season 4 Finale — how many times have you watched it and was it satisfactory for you? I liked it, quite a bit, although Episode 405, “Savages” still gets top spot in my Season 4 episode ranking.

I’ve said it countless times, I am fully behind the Murtagh adaptation for numerous reasons. The finale gave me the cherry on top. Lots to discuss here so let’s get to it (that one’s just for you, Peakers)!

Related by birth, otherwise or not at all, these Outlander women are cut from the same cloth as warrior Goddess Athena. They get it done, whatever “it” may be. Here’s how I scored them:

Claire’s a strong woman, but I didn’t feel a strong Claire vibe in this episode. Her forte seemed to be either relaying bad news or issuing warnings. 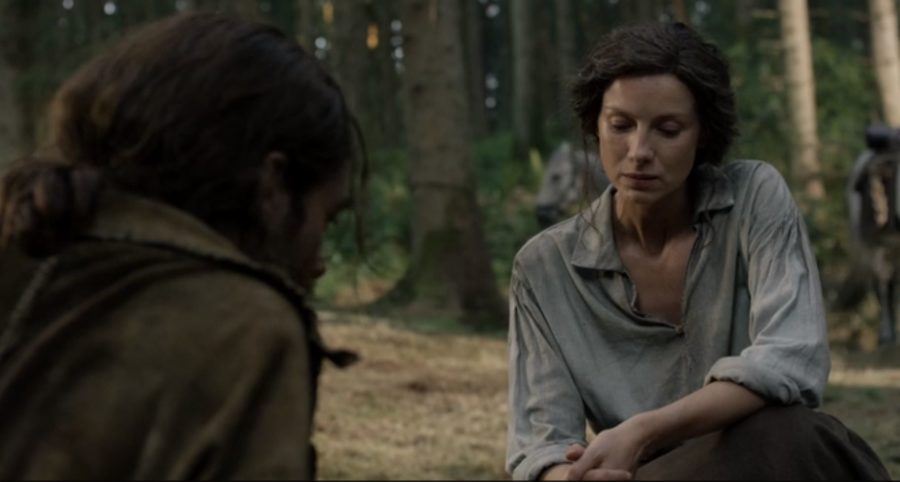 Speaking from experience, natural childbirth takes special strength. Bree gets high marks for the birth, forgiving her Da and for that dinner entrance. 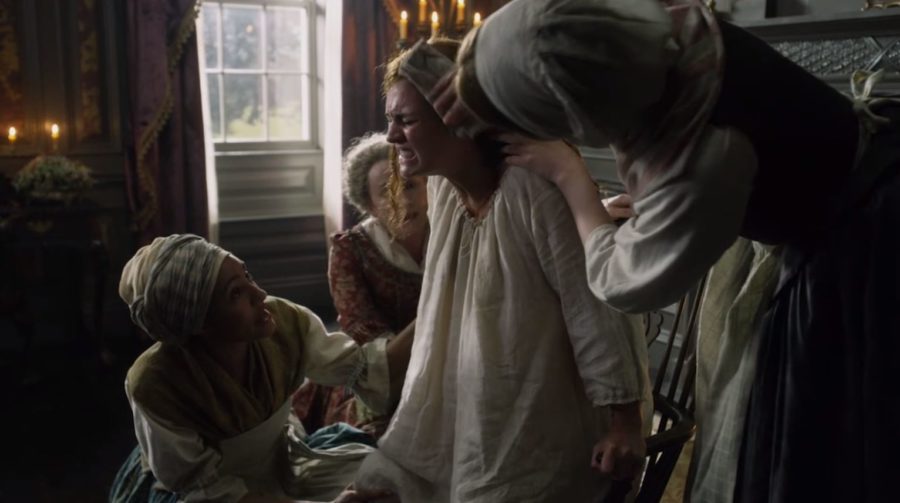 Wahkatiiosta knows that Otter Tooth’s stone carries great power and was willing to be banished in order to get it. She gets points for bucking the system. 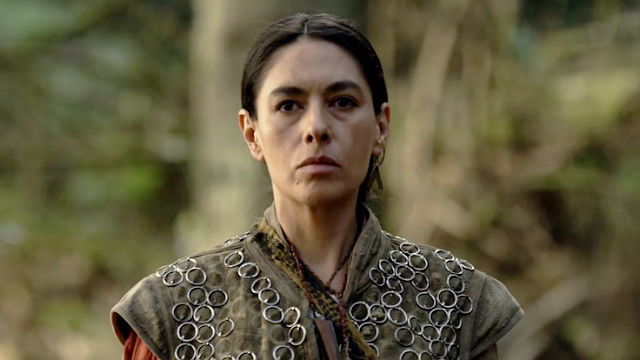 Perhaps the strongest of all, Jocasta’s “how dare you eat my food and throw my marriages in my face” Mackenzie spirit takes her to some interesting places. We all knew where it was going when she threw her precious whisky in Murtagh’s face. Undoubtedly, Sandra Bullock got her moves from Jocasta.

The men of Outlander gave a good showing in the Outlander Season 4 Finale. Yeah, you’ll see some arbitrary scoring here for sure.

Jamie found Roger and was willing to be traded for his release. His heart was on his sleeve when he had to say good bye to Ian. But Jamie failed to bring Roger back with him. He also didn’t make it back for the birth, such an emotional and critical part of Diana Gabaldon’s story, and he didn’t hold his grandchild. I know, I know. I’m whining. I’ll move on. 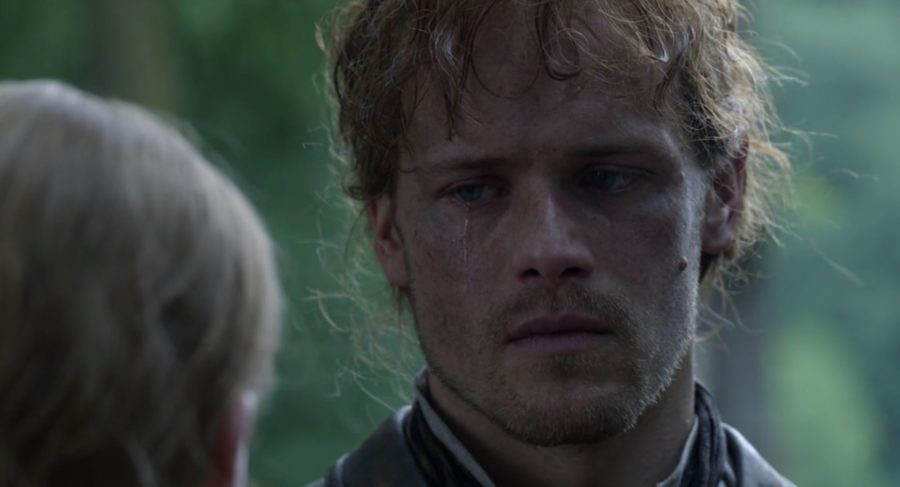 Ian outfoxed Jamie, sacrificing himself for the greater good by trading himself for Roger. When he sighed and squared his shoulders and jaw, Ian’s worth was obvious to all. Then, to top it off, he went Van Morrison “Laughing and a-running, hey, hey, skipping and a-jumping” through that gauntlet. He gets So. Many. Bonus. Points. 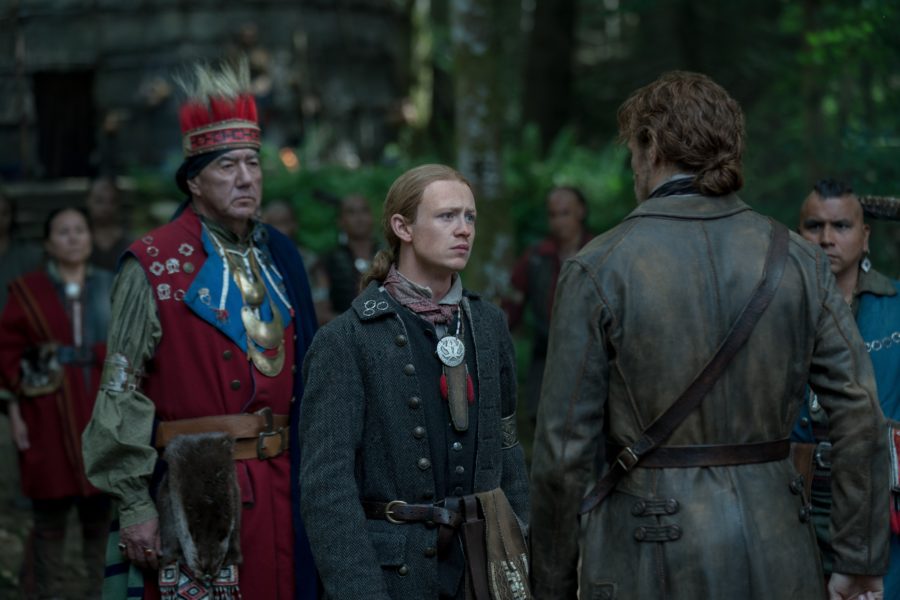 Poor Roger gets a 10 just for staying alive and for giving Jamie that beatdown despite his weakened state. “Take me to see my son,” were the words we all wanted to hear so bonus points for him, too! 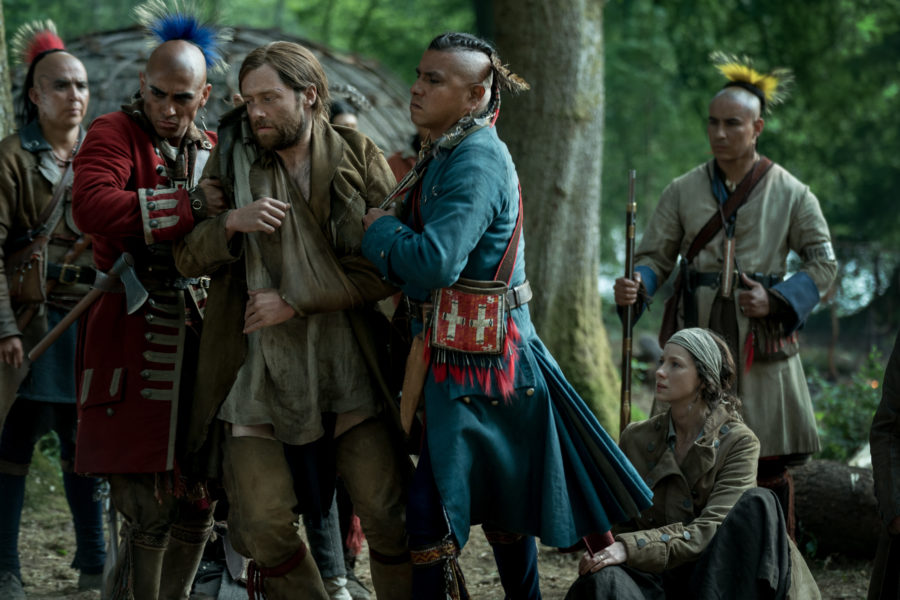 The Mohawk Chief speaks and we all listen. Enough said. 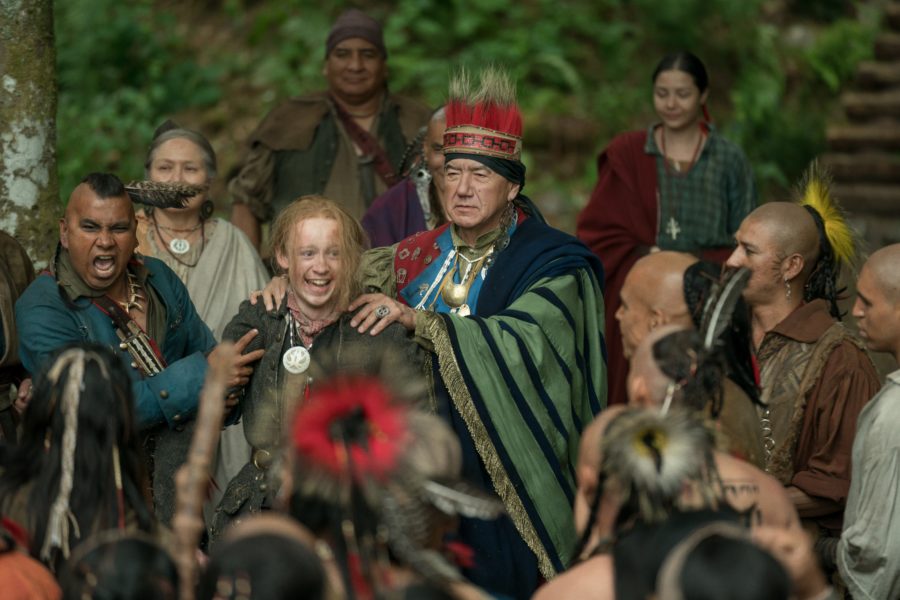 We love this sleekit Silver Fox Murtagh! Well, all of us except those who don’t appreciate this particular adaptation, right? I respect your opinion! He’s a bad boy yet supports Bree. What’s not to love?! 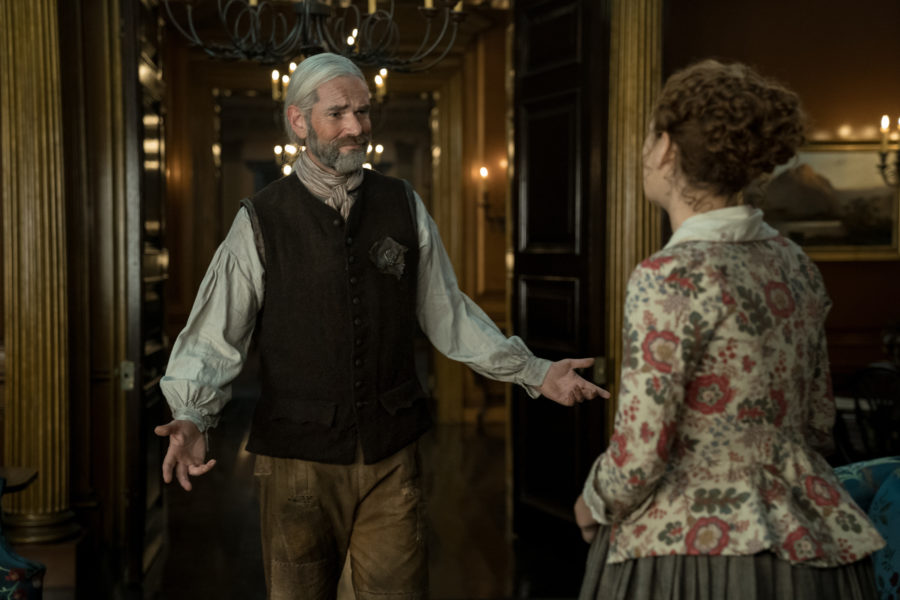 Power couples are an Outlander staple and the Outlander Season 4 Finale gave us a bonus. First we got that sultry surprise, MurCasta, and then the reunited-and-it feels-so-good MacBree.

Loved that we got what felt like a true, face-to-face Jamie and Claire moment when Jamie tries to trade himself for Roger. It had its place but wasn’t in my top 10. By the way, why don’t Jamie and Claire have a cute name?? 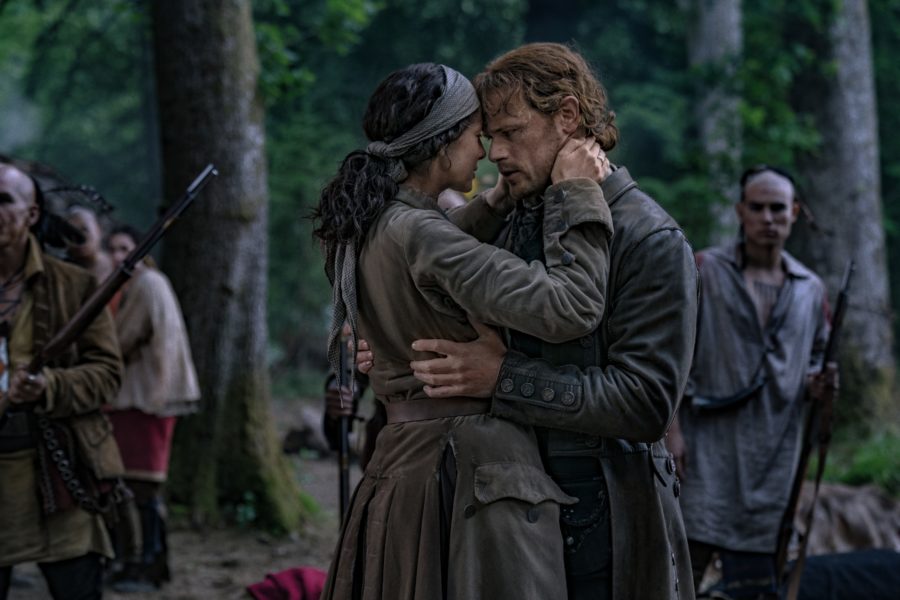 Book reader or not, did you ever doubt Roger would return to Bree? As he said, “I may be stubborn, but I’m not a fool.” And Bree found a way to outsmart Jocasta and not marry before his return. Well done, MacBreee! 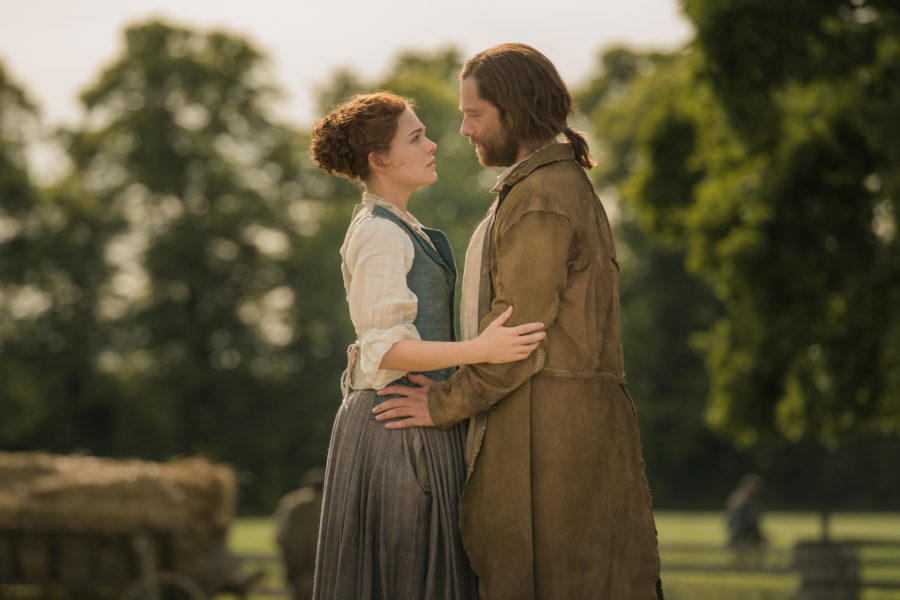 Well, well, well. Miss Jo had all kinds of surprises up those lacy sleeves and sleekit must be right up her alley. Yes, Murtagh was in love with Jocasta’s sister, but maybe some MurCasta sparks flew back then, too. Either way, they sure surprised Jamie and Claire. Can’t wait to hear the discussion in Outlander Season 5. 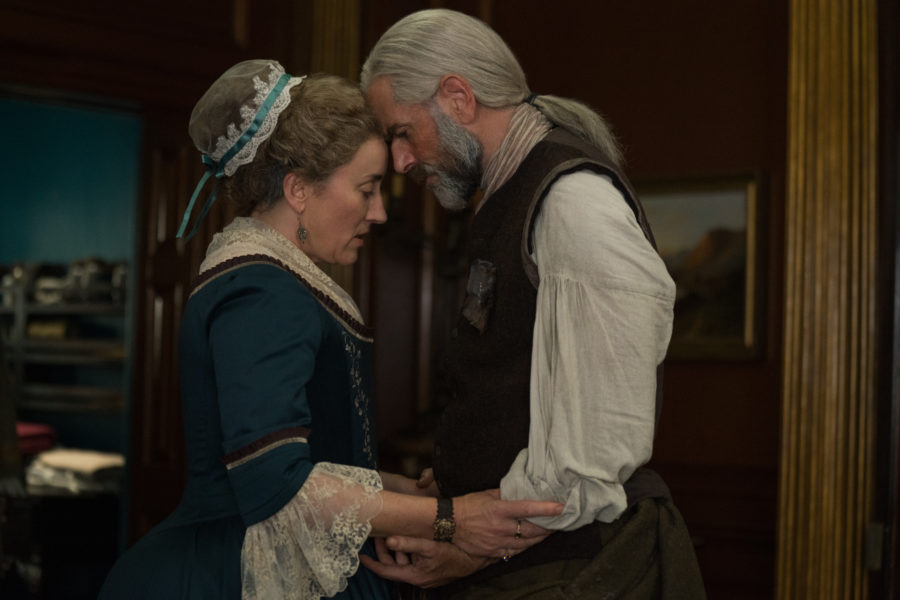 While we didn’t see many new costumes in the Outlander Season 4 Finale, I did find things I had missed, notably in the accessories. One idea in particular stood out — the more serious the scene, the more — and the more elaborate — the accessories. Ian’s coat and the vibrant costumes of the Mohawk leaders are the perfect resting place for their circles and other symbolic pins. Next time you watch, look for the Scottish Luckenbooths on Tehwahsehwkwe’s collar. Terry Dresbach’s unique vision will be missed in upcoming seasons. 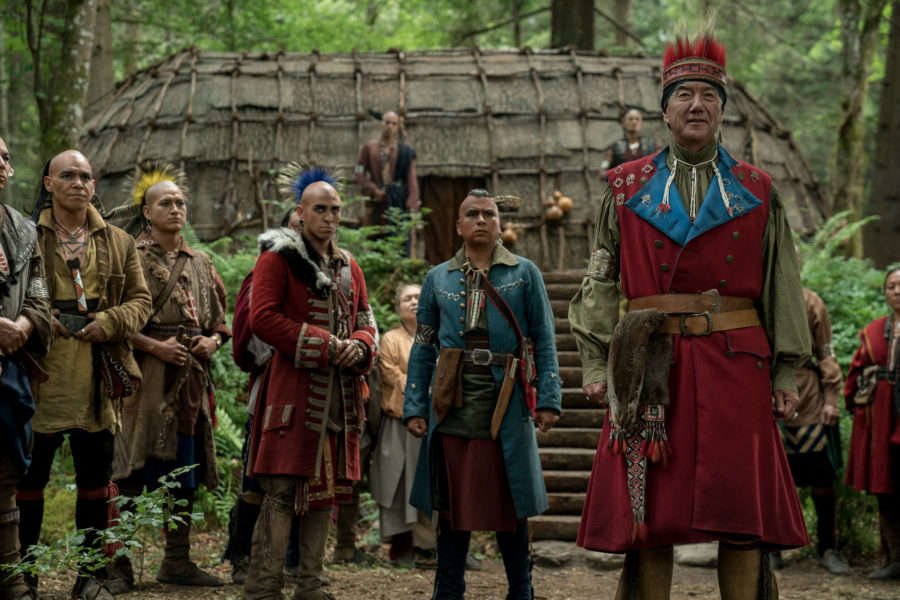 I could go on and on about the costumes but there’s only one “new one” that stood out for me. It’s one that was, well, less than more. Silver Fox Murtagh seemingly in his birthday suit (and maybe a modesty pouch) scored all the points with me. 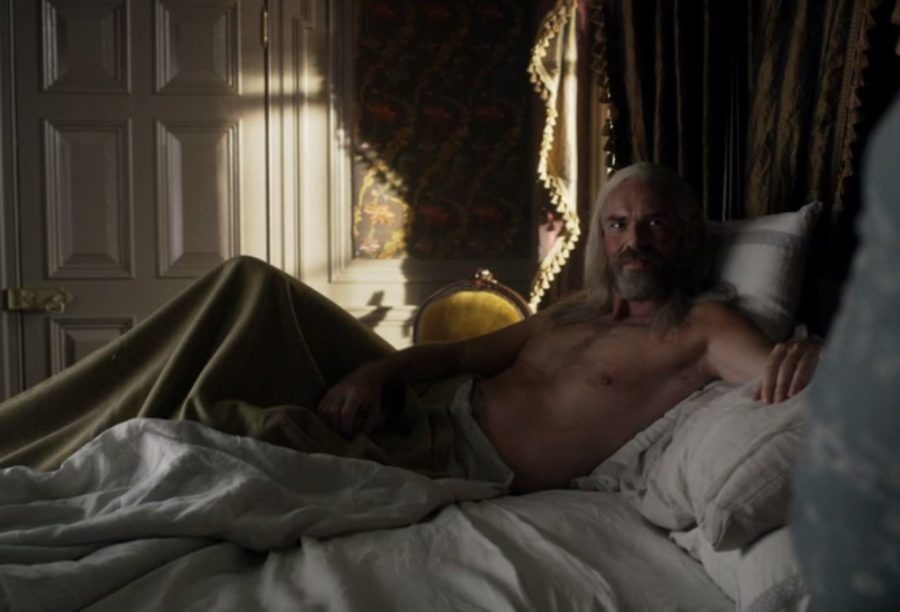 Although Jon Gary Steele gets a huge helping hand from Mother Nature, Mr. Steele dresses up the outdoors like no one else! Between the exterior sets and Jocasta’s River Run, the Outlander Season 4 Finale was a visual feast.

I don’t think I could be more in love with Jocasta’s living room (or is it a sitting room??). I need to get that dark wood and blue fabric in my house, seriously. 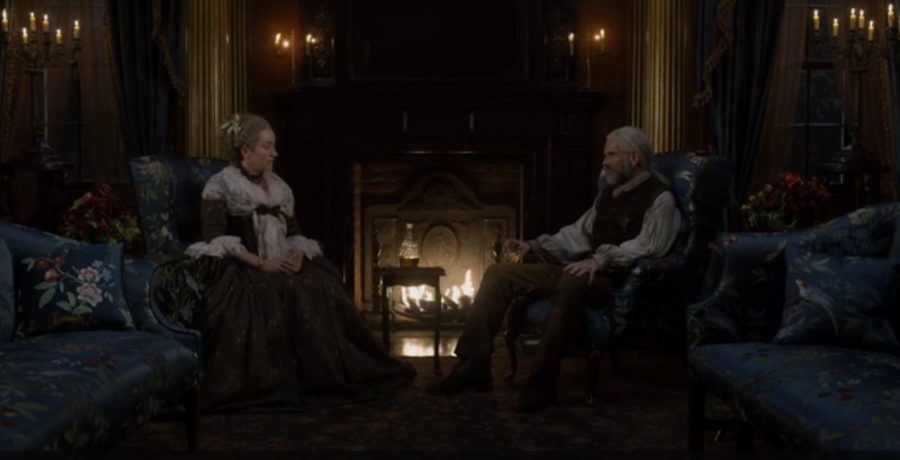 Bree’s purple bedroom gets high marks, too. The four-poster bed perfectly framed her and her bairn, did it not? 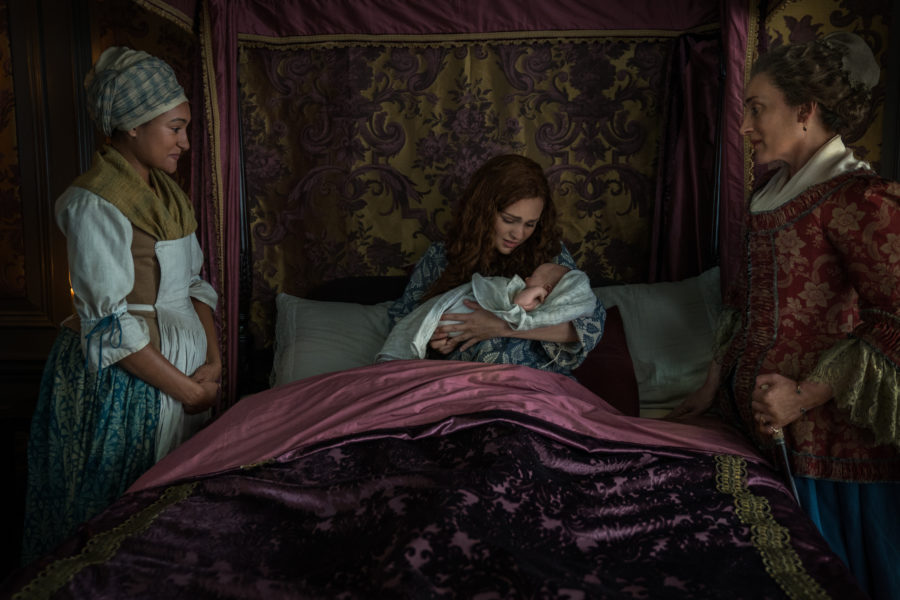 It’s the Mother Nature factor that scores extra points for the outdoor sets — the wind rustling in the trees, the water reflecting the canoes as they move down the river. 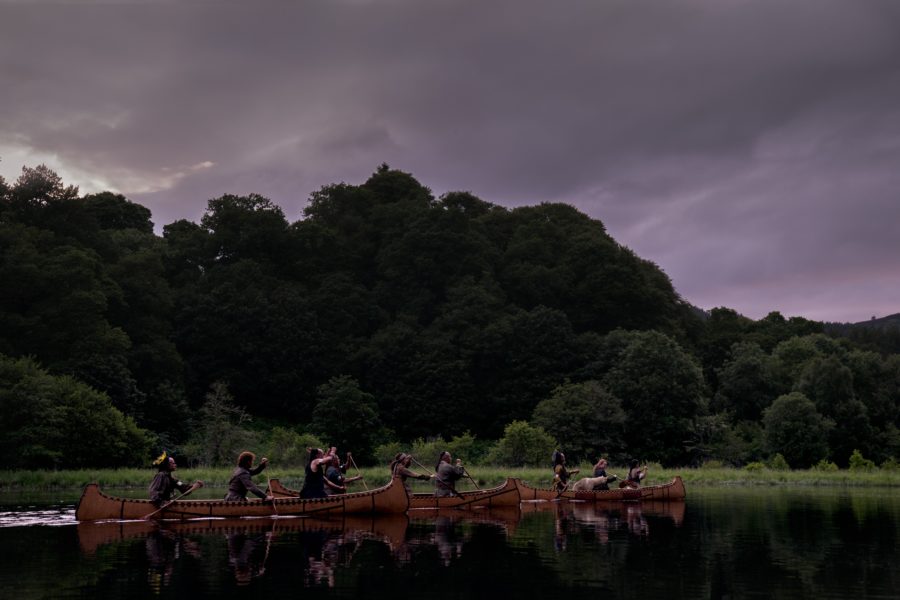 The Mohawk Village was a wonderful tribute to a life lived outdoors, off the land. How many of us could survive in those conditions? It really does take a village. 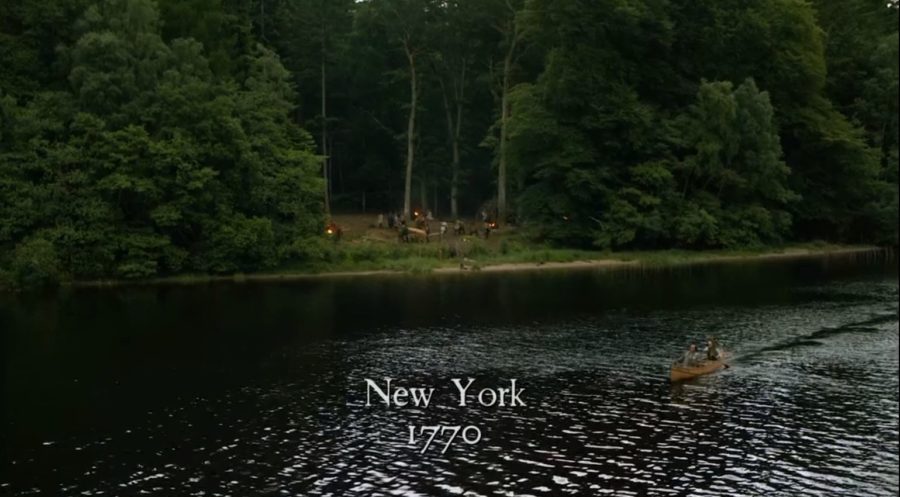 For a discussion of all the Bear McCreary Outlander Season 4 music magic moments, watch for Anne Gavin’s upcoming deep dive post. I feel compelled, however, to mention and score a few stirring moments from the Outlander Season 4 Finale.

The use of Faith’s theme in the opening was emotionally effective. It didn’t quite fit for me, though, as I equate it with death.

The passage we hear with drums as Jamie first scouts the Mohawk Village was my favorite. I can’t say why, particularly, except that I felt it in my chest and gut.

This sweeping passage was also stirring, actually eliciting chills. In the beginning I heard what I thought of as Roger’s guitar followed by those strings — lifting then soothing — then the “Take me to see my son” woodwinds and flute. I would have been happy ending it right there!

Otter Tooth, the Mohawk version of Shinty players and Ulysses tugged at my heartstrings, all for difference reasons.

Jamie, Claire, Roger, Ian, and company wracked them up this season. No one does the exquisite single tear better than the actors of Outlander. 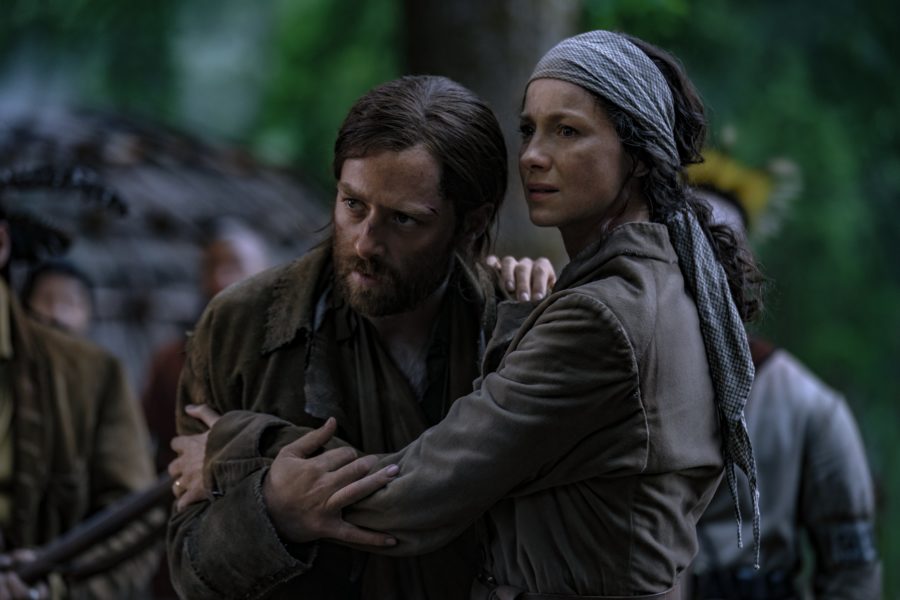 I didn’t think Jamie’s voice could be any sexier but it definitely was in the final scene. Put on those readers and speak virus to me, Jamie. (Maybe it was the scratchy sound that scared the baby.) 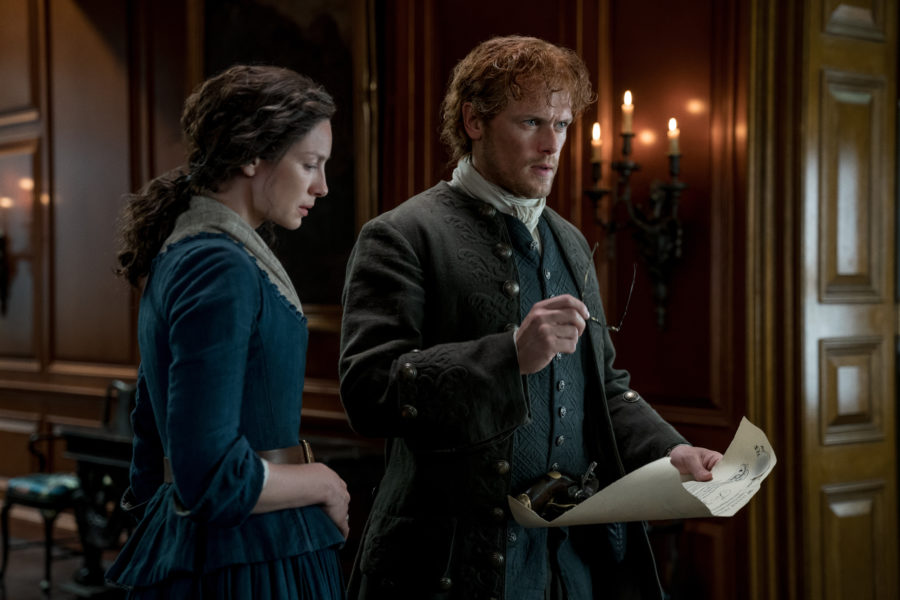 Ian and his spirit of adventure took the night in my book. Many will likely benefit from his selfless act. I haven’t yet read The Fiery Cross and hope we will see him in Seasons 5 and 6. I can imagine him finding a wife and Rollo “babysitting” their bairns.

So how does your heart score stack up against mine?
Agree, disagree, think I’m crazy and wasting my time??