email
A TV show can have a wonderful plot and actors but if the costumes fall short, so, too, will the show itself. As Outlander costume designer Terry Dresbach announces that Season 4 will be her last, we take a moment to thank her.

Clothes may make the man but for the last three (soon to be four) seasons, they have also made the woman, child and every extra in Outlander, thanks to the genius of Terry Dresbach. This week Dresbach, who oversaw the show’s costume department and who is married to Outlander showrunner Ron D. Moore, announced that Season 4 (which is due to premiere in November) was her last on the STARZ show. The announcement came on the heels of Dresbach’s second Emmy nomination (and the only one for Outlander this season) and after she had a serious health scare that put her in the hospital for several days. She cited her health and her children in an article in Entertainment Weekly explaining why she was stepping away. “I will never do another show,” she told Lynette Rice.

Outlander’s production values have helped the show stand out since it first aired, and the costumes figure large as part of that, both in the show’s attention to historical detail and its popularity. Outlander fans are nothing if not sticklers, and a show that had so-so costumes would never have made the cut. Not kidding.

So without further ado, we take you down costume memory lane with this big thank-you to Terry. Your attention to detail and historical accuracy, your work ethic and your love of Outlander have brought us all so much happiness. Best of luck in your next endeavors, whatever they may be. Here’s hoping that the second time is the charm and that you get the Emmy you so richly deserve.

Here are just a few of the highlights from Terry’s four seasons with Outlander.

Knitters around the world gasped in Season 1 when Claire arrived in 18th century Scotland and we began seeing shawls! Fingerless gloves! Capelets (was that even a 21st century thing before Outlander?)! The ending credits hadn’t finished rolling before knitters were scrambling for their largest needles and bulkiest yarn to try to copy the amazing knit goods on this show. 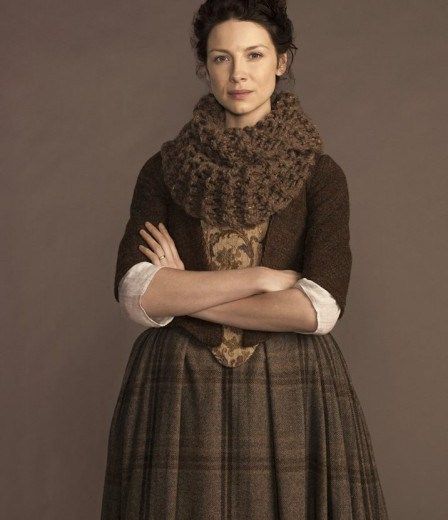 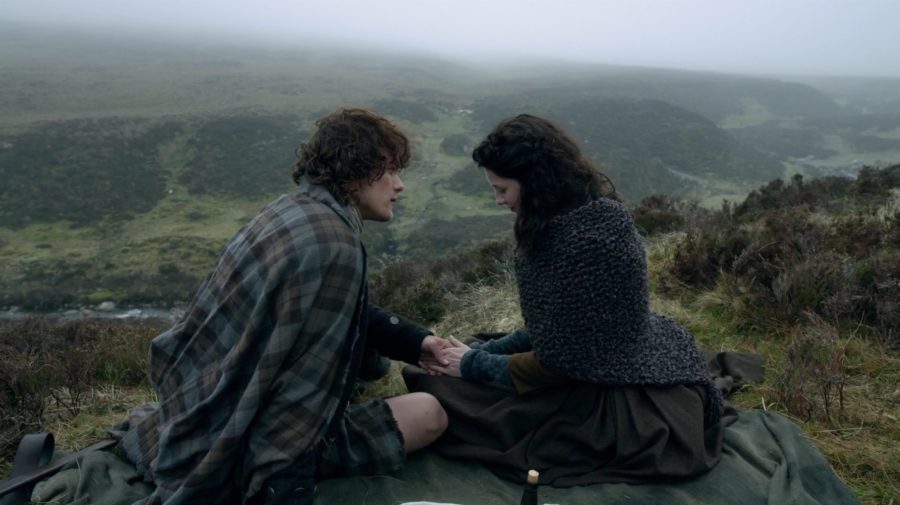 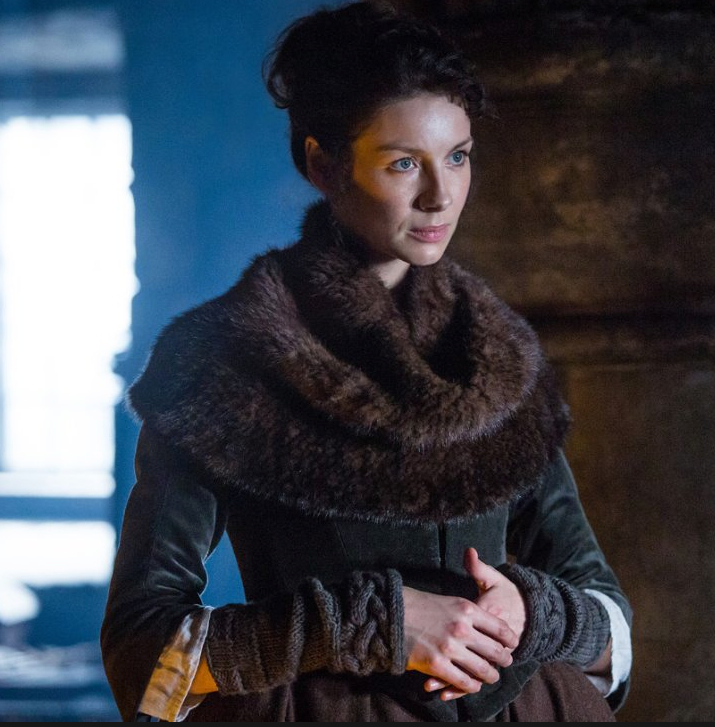 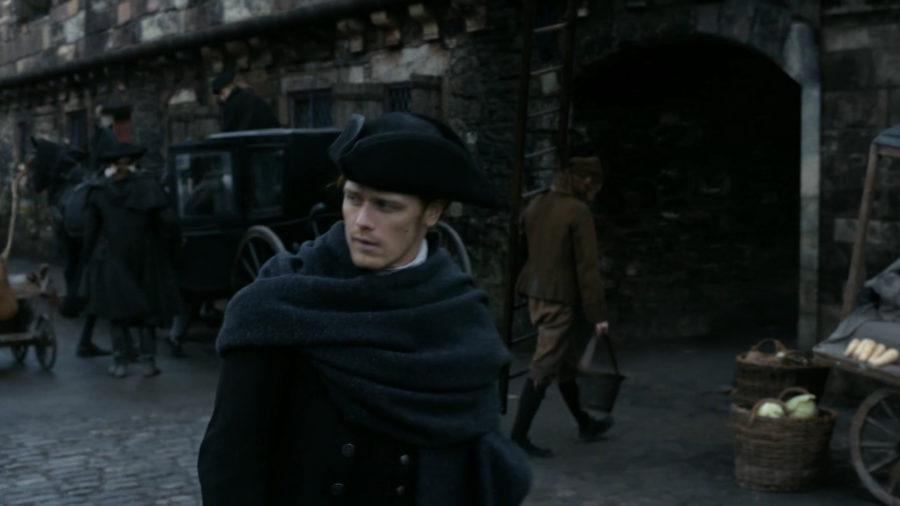 Terry may have single-handedly raised awareness of all things tartan as she explored the wonderful world of Highlanders. Indeed, Harper’s Bazaar posited precisely that in an article about how the show was reviving an interest in Scottish (read tartan) fashion. Who knew brown and gray could be so lovely? Answer? Terry Dresbach. 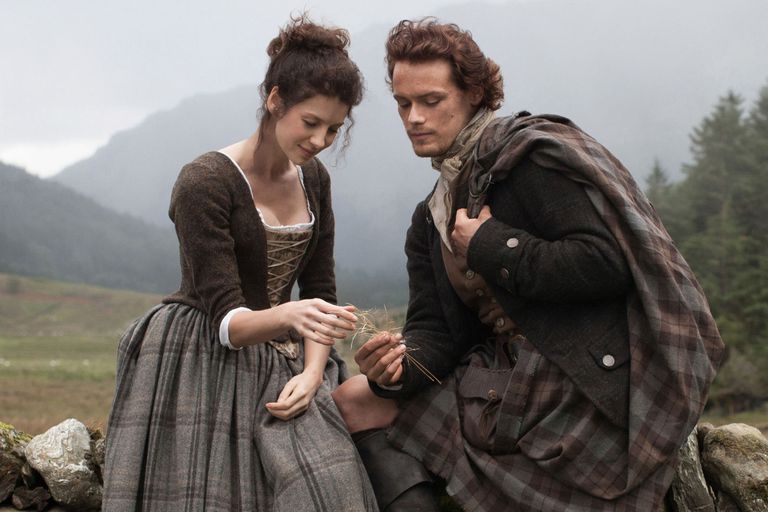 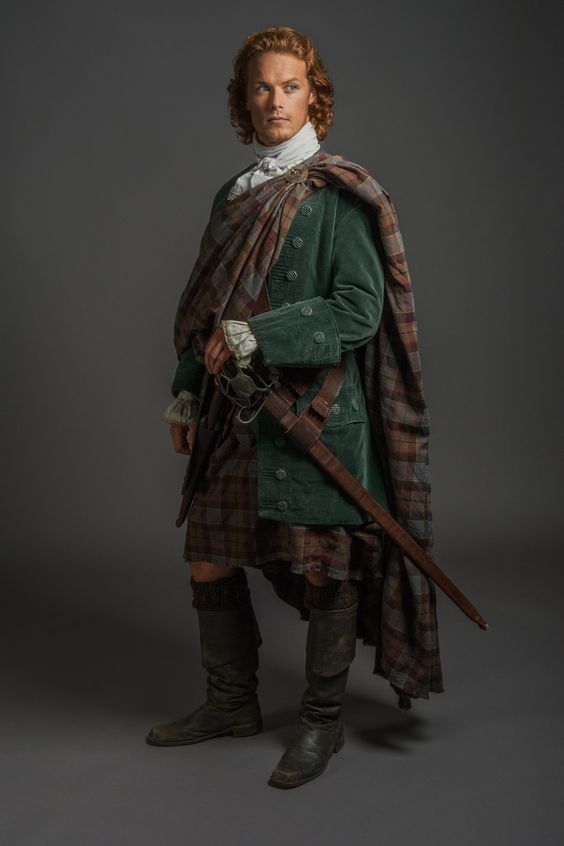 Terry’s design diversity and her ability to recreate more than one historical period was patently clear in Season 2 as she took us on an absolutely sumptuous ride through the Parisian elite. You could almost feel the material through the TV screen, it was that gorgeous. 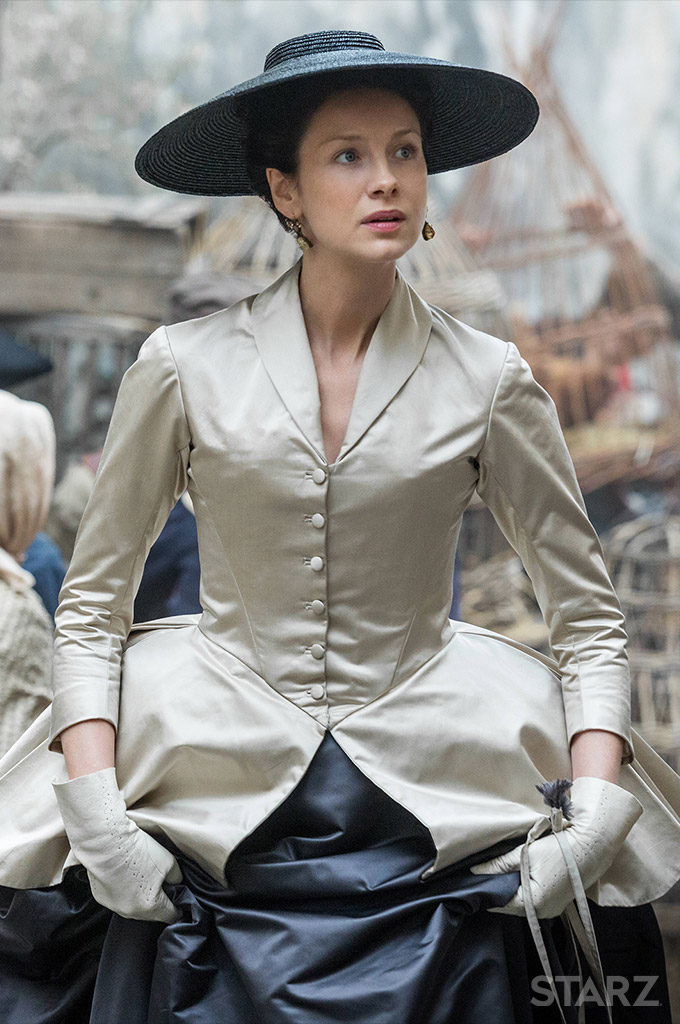 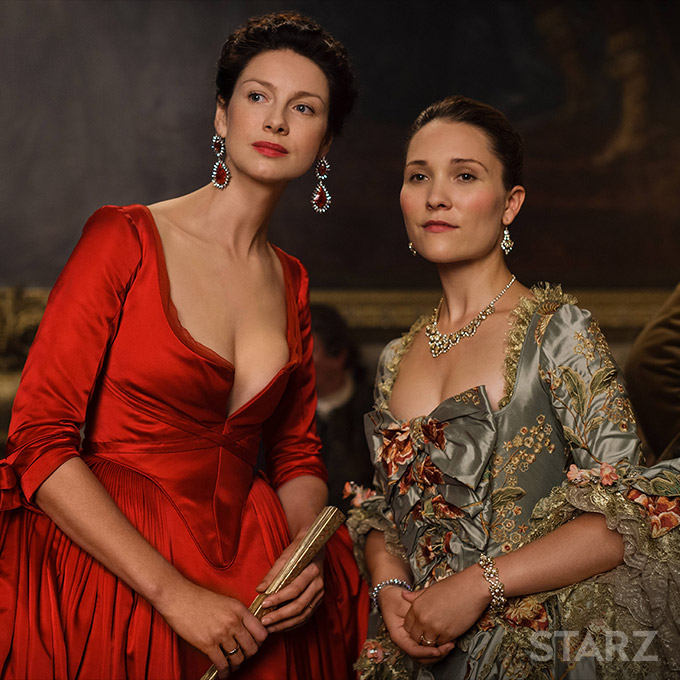 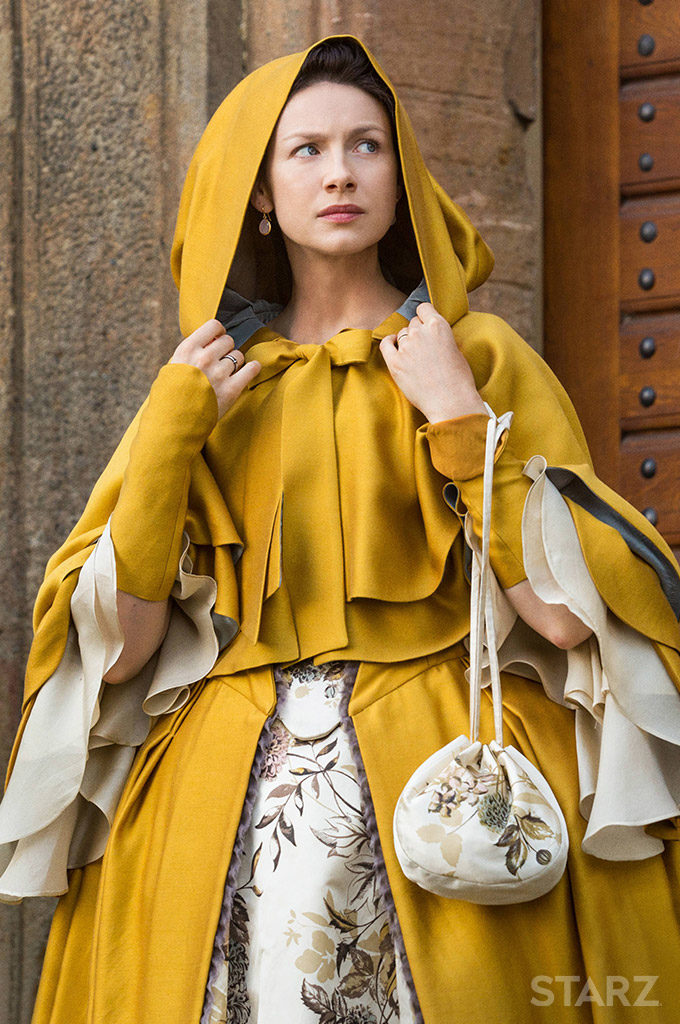 For those of us who lived through the ’60s, Terry and her team nailed it. End of story. I swear some of these things hung in my mother’s closet. 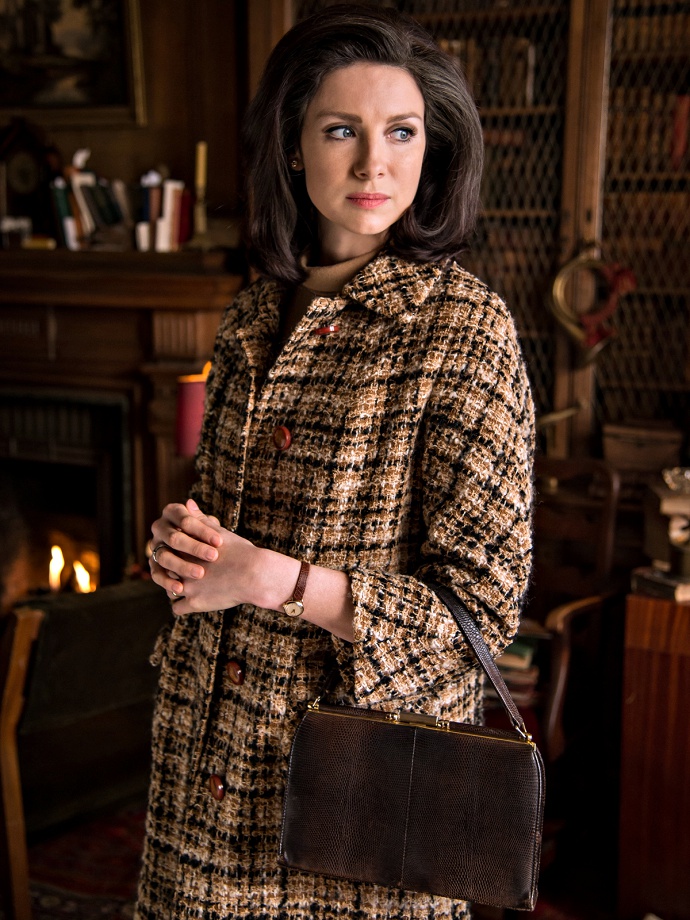 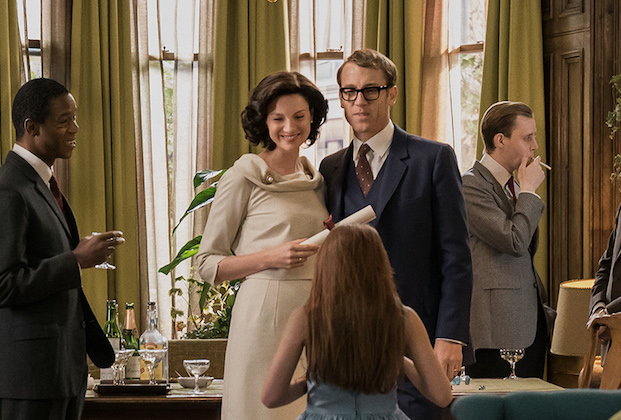 Her Attention to Detail

If you ever needed convincing of how important a costume can be in selling an idea, the moment when Jamie sees Claire in her wedding dress for the first time should prove the point. “I’ll never forget when I came out of the church and saw you for the first time,” he tells Claire. “It was if I had stepped outside on a cloudy day and suddenly the sun came out.” That wedding dress need to absolutely shine and so it did. Terry has written of how she and her team sewed on individual pieces of mica to create the required shimmer for the wedding dress in Season 1. 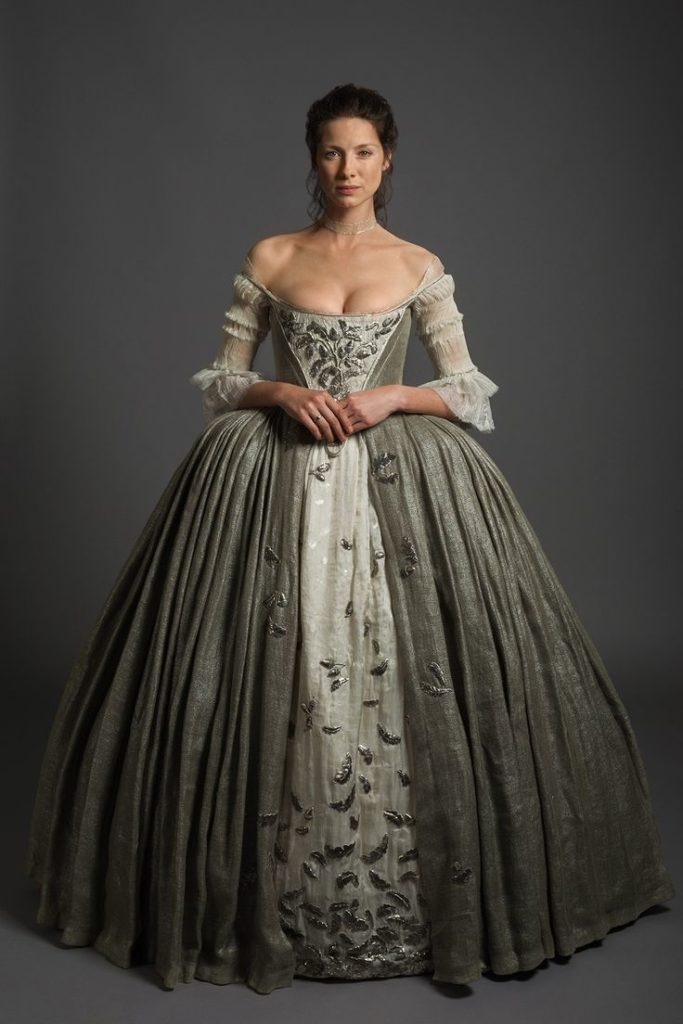 And this is just one example of how no detail was too small for Terry and her team. They sewed animal references that really no one would ever see clearly on a TV screen but the cast would know were there. They “disintegrated” items like Claire’s shift in Season 1 and the “bat suit” in Season 3 to make the clothes as authentic as possible. 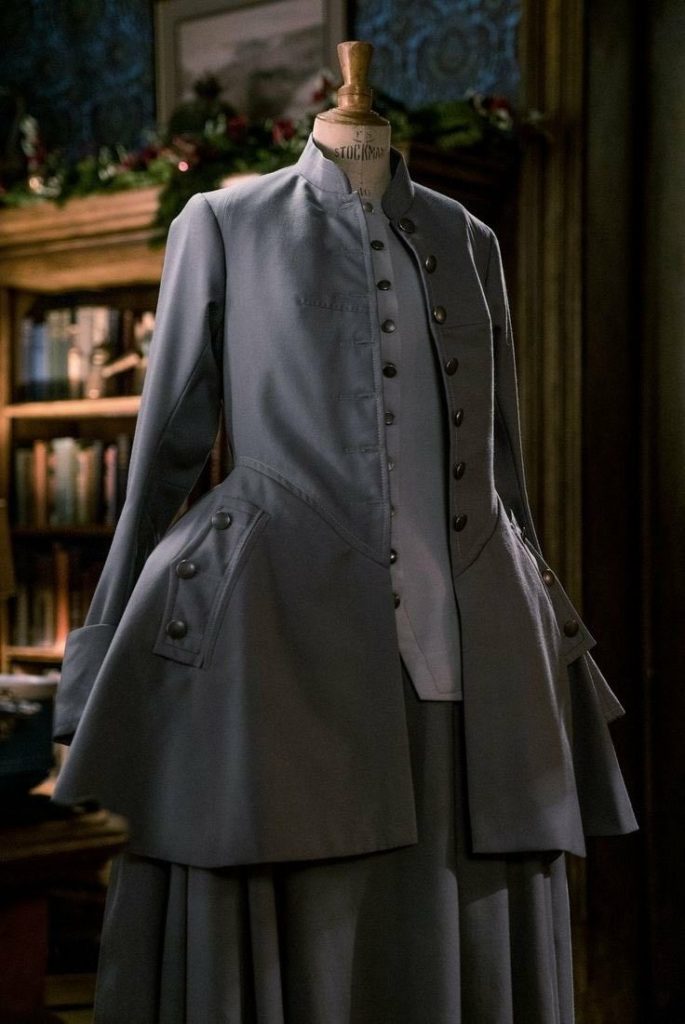 Bat suit at the beginning

They also had to make multiples of various outfits in case something happened during filming. They made 15 versions of Jamie’s iconic white shirt and six of Claire’s bloodied WWII apron, for instance. And they reused clothes just as they would have in the time period. Marsali, for instance, wears a former dress of Claire’s in Season 3.

That same attention was paid to shoes as well, which these absolutely killer red shoes prove in spades. 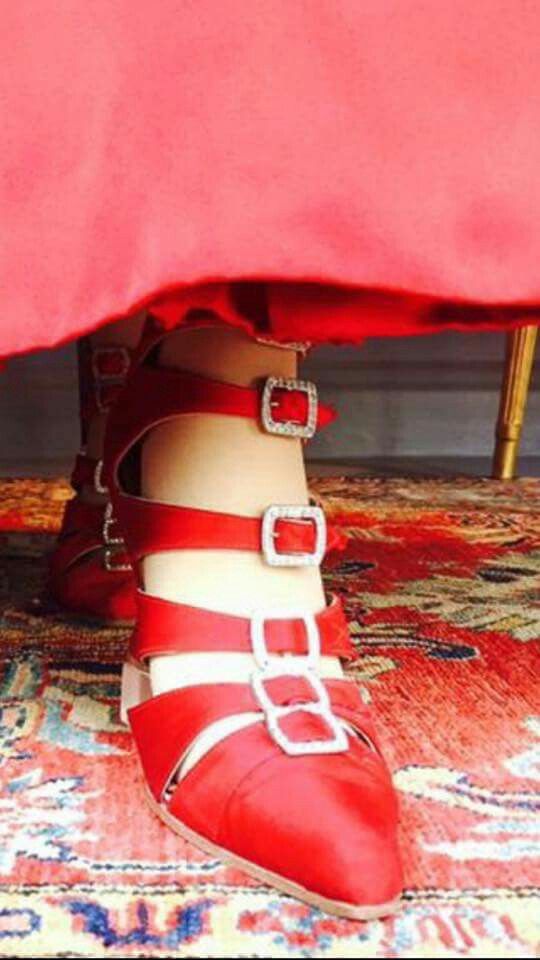 These are just a small sampling of Terry’s handiwork. You can see a slice of her Outlander journey and the many details she considered on her Pinterest board, where she has released behind-the-scenes images and sketches of her designs and thought processes. Be prepared to get lost for a few hours.

What were your favorite Terry Dresbach designs?
Was there one dress or clothing item that helped seal a moment for you in the show?